Good news PA count may in by today…hopefully

Alright, PA Secretary of State Kathy Boockvar says it's likely we could know by TODAY the winner in the state of PA. The outstanding 550K +/- votes are being counted today.
Windthin (David Bythewood) November 5, 2020, 7:05pm #23

Here it is, in all caps for the inattentive: disregard the vote count and just hand victory to Trump, Levin says. I’ve been waiting for the first open call for this move. twitter.com/marklevinshow/…

<thread> On Levin's tweet. Here's the likely cockamamie strategy and why it should be doomed to fail. Trump-Giuliani-Levin strategy: Step 1: Try to delegitimize vote count in PA and elsewhere — no matter how much thinking people know their allegations are really bonkers. https://t.co/F26W2GWC0m 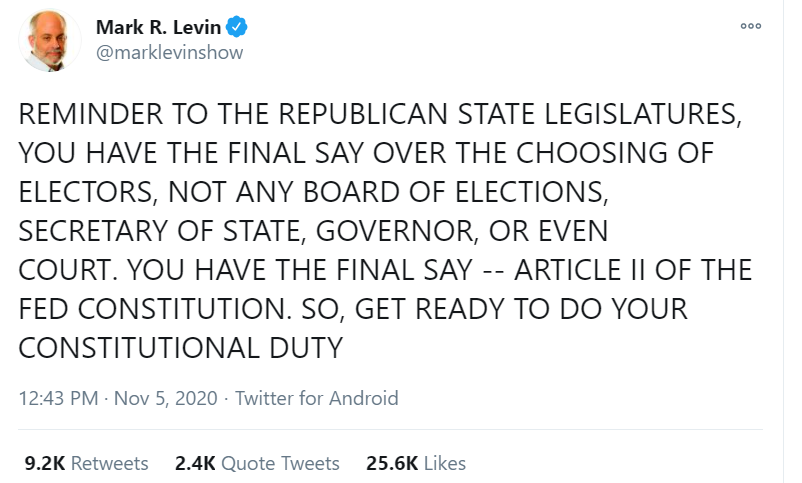 Step 2: Try to gin up public outrage that resonates with the Trump base — even if the outrage is internally contradictory ('count the vote' in AZ, 'stop the count' in PA) and based on lies.

Step 3: When race is PROPERLY called for Biden in PA and elsewhere, the Levin cabal tries to put immense pressure (via Trump's outraged base) on PA Republican Legislature to select Trump electors on the (false) claim that the vote count was fraudulent They're doomed to fail...

This cockamamie idea is doomed to fail for many reasons. Among others, state and federal courts' already finding against their truly ludicrous allegations against the vote count. Plus a fundamentally flawed view of how the electoral system works.

REMINDER: State legislatures may not substitute their judgment for the will of the people by directly appointing their preferred slate of electors after Election Day. Read our @ElectionTask legal primer here: https://t.co/NuuE05syU6

And here's from the expert who wrote THE book on the electoral college, @jessewegman 👇 twitter.com/jessewegman/st…

This is incorrect, caps or not. All states give the choice of electors to the people directly. You can't change the rules after the game has been played. Only if a state has "failed to make a choice" can legislature take back the electors. A close margin is not a failure. https://t.co/bLinRkbvqd
1 Like
dragonfly9 November 5, 2020, 7:30pm #24

The Trump family is now calling on GOP-controlled state legislatures to nullify the actual vote and push for Trump electors. This is a dangerous moment. https://t.co/aaEuRCiudk Esper also plans to help Congress draft legislation to strip military bases of Confederate names, which could further alienate him from Trump.

Trump’s lead in Georgia is down to 12,771, and the ballots coming in are all heavily leaning blue.

Testimony in federal court revealed 68 ballots in Atlanta and some 1,400 ballots in Pennsylvania didn't arrive by Election Day. A federal judge ordered the Postal Service to continue searching facilities for undelivered ballots. trib.al/jVc8bhe 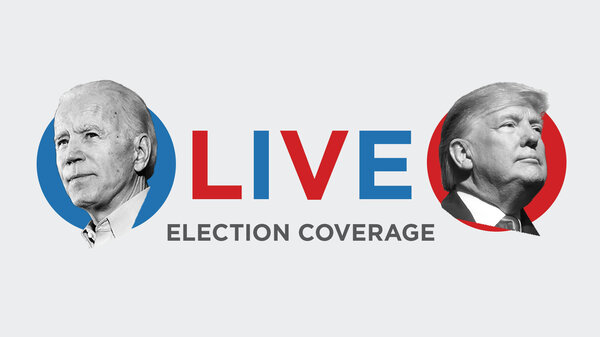 Follow the latest news and analysis of the presidential, House and Senate races.

As the counting of votes continues, so does the scrutiny of the U.S. Postal Service. In testimony Thursday before U.S. District Judge Emmet Sullivan, it was revealed that as many as 68 ballots were not delivered in Atlanta in time to be counted on Election Day and that some 1,400 ballots mailed over the weekend didn’t arrive by Election Day in Pennsylvania. But officials in the state have until Friday to receive them, and postal officials were ordered by Sullivan to keep sweeping their facilities for ballots until then. The order also applies to North Carolina, where election officials will accept mail-in ballots until next week, as long as they were postmarked by Election Day.

Based on a court filing this week, it appeared that the Postal Service had lost track of some 300,000 mail-in ballots. The ballots had been scanned into the system, but there was no record that they had been scanned out. But the Postal Service said in a statement that there was a simple explanation: Under the extraordinary measures it was taking to get election mail delivered on time, postal workers removed the ballots from the system before they received a final scan and delivered them directly to election boards.

Mark Dimondstein, president of the American Postal Workers Union, says that’s exactly what happened. “They’re not missing,” Dimondstein told NPR. “They’re not disappeared. We have every reason to believe they made it to their final destination and were counted. They’re not accounted for in the same way that regular mail would have been.”

The Postal Service has been under extreme scrutiny during this election season. Because of concerns over the coronavirus pandemic, some 65 million Americans voted by mail nationwide. But there were deep suspicions after Louis DeJoy, a big-dollar donor to Republicans including President Trump, was named postmaster general. DeJoy, who ran a logistics company, immediately introduced cost-cutting measures that critics said slowed the mail. The Postal Service suspended those changes, spurred by a series of lawsuits from state officials and advocacy groups.

Dimondstein says he is “very proud” of the work done by his members, despite the scattered glitches. “Obviously, all the votes should be counted, but this was a real success for the American people.”