1/ Trump confirmed that he is considering "various tax reductions," including a payroll tax cut, to stimulate a weakening American economy. The White House previously disputed that a payroll tax was under consideration. Trump said had "been thinking about payroll taxes for a long time," and that "it's not being done because of recession." Trump added that he's thinking about reducing capital gains taxes, which would largely benefit wealthy investors. (Washington Post / New York Times)

Trump invoked one of the worst anti-Semitic smears today by saying Jews who vote for Democrats show “lack of knowledge” or “great disloyalty.” Accusations of disloyalty or divided loyalty are an age old attack on Jewish people. 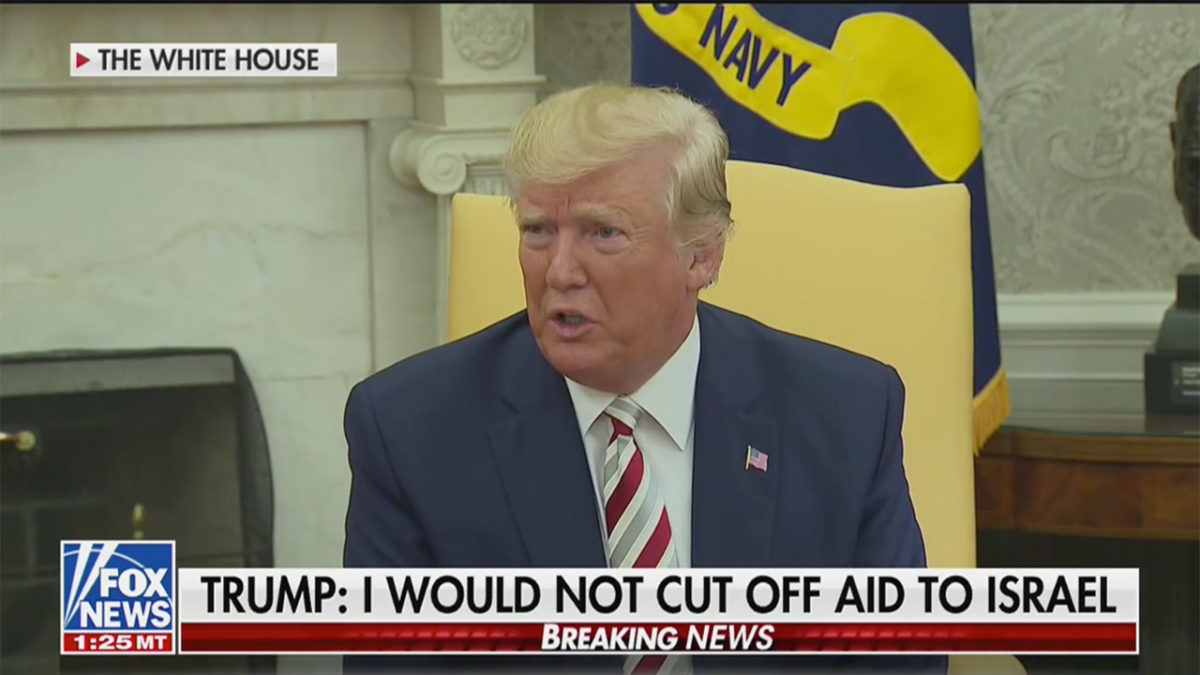 President Donald Trump today continued ripping Congresswomen Rashida Tlaib and Ilhan Omar, saying that Jews that vote for the Democrats are showing either a "lack of knowledge" or "grea

President Trump said Tuesday that Jewish people who vote for Democrats are either ignorant or disloyal as he railed against two congresswomen who have been critical of the U.S.-Israel alliance.

Already at least one of the children who died due to the flu. This is monstrous.

U.S. immigration authorities do not vaccinate migrants in custody against the flu virus, and Customs and Border Protection (CBP) does not have any plans to do so ahead of the upcoming flu season.

At least three children held in detention centers at the Mexican border have died, in part, from the flu, a group of doctors say.

The Centers for Disease Control and Prevention recommends annual flu shots for everyone over 6 months old in the U.S.

At least three children held in detention centers at the Mexican border have died, in part, from the flu, a group of doctors say.

The plan is for people to die in cages.

The plan is for people to die in cages.

If Greenland isn’t for sale, President Trump doesn’t want to talk to Denmark. In a series of two tweets, Mr. Trump said he would delay an already-scheduled meeting with Prime Minister Mette Frederiksen because of her lack of interest.

OMG. Is Trump trying to piss off every country on earth? I had a bad feeling when, during one of his first international phone calls as President, he was exceptionally rude to the Prime Minister of Australia and then abruptly hung up on him.

Yeah – let’s stick it to Australia and Denmark – it’s about time they got what’s coming to them for treating America like dirt – no, wait a minute, I just remembered, they’re among our staunchest allies. Oops.

If Greenland isn’t for sale, President Trump doesn’t want to talk to Denmark.

In a series of two tweets, Mr. Trump said he would delay an already-scheduled meeting with Prime Minister Mette Frederiksen and the country’s queen in Copenhagen because of Denmark’s lack of interest.

“Denmark is a very special country with incredible people, but based on Prime Minister Mette Frederiksen’s comments, that she would have no interest in discussing the purchase of Greenland, I will be postponing our meeting scheduled in two weeks for another time,” he wrote.

Mr. Trump then offered a compliment to the Danish leader for her blunt refusal.

“The Prime Minister was able to save a great deal of expense and effort for both the United States and Denmark by being so direct. I thank her for that and look forward to rescheduling sometime in the future!” he wrote.

Ms. Fredriksen had said Sunday, a few days after the Wall Street Journal first reported Mr. Trump’s interest in purchasing the gigantic Arctic island from Denmark, that the entire idea was absurd.

“Greenland will not be sold … I persistently hope that this is not something that is seriously meant,” she said. “Thankfully, the time where you buy and sell other countries and populations is over. Let’s leave it there.”

Mr. Trump had been scheduled to visit Denmark next month on his way back to the U.S. from a visit to Poland. 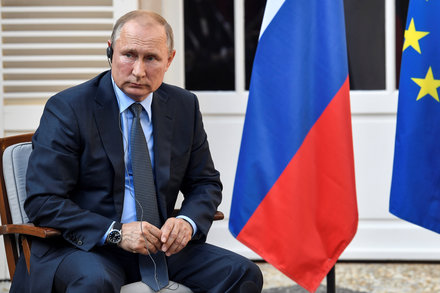 Trump Says Russia Should Be Readmitted to G7

President Trump issued his latest call for ending Moscow’s international pariah status, but the idea is likely to earn a cool reception at the annual Group of 7 summit starting this weekend.

President Trump said on Tuesday that Russia should be readmitted to the Group of 7 industrialized nations, a call for ending Moscow’s pariah status on the world stage that is likely to earn a cool reception when the group’s annual summit opens this weekend.

Speaking a few days before his planned departure for the summit, in Biarritz, France, Mr. Trump said that Moscow’s exclusion since 2014 from the group of leading economic powers should be reversed and, ignoring Russia’s aggression in Ukraine, contended that the true reason for it was President Barack Obama’s wounded pride.

“I think it’s much more appropriate to have Russia in,” Mr. Trump told reporters in the Oval Office before a meeting with President Klaus Iohannis of Romania. “I could certainly see it being the G8 again.”

One reason, Mr. Trump said, was “because a lot of the things we talk about have to do with Russia.”

Russia was disinvited from gatherings of the former Group of 8 after the country’s annexation of Crimea, which in a joint statement the remaining group members called a violation of international law that could have “grave implications for the legal order that protects the unity and sovereignty of all states.”

Yup. and just when you think this can’t get any dumber, President Laughing-Stock-of-the-World canceled a meeting with the Prime Minister of Denmark ON TWITTER because she won’t (CAN’T!) sell him Greenland. 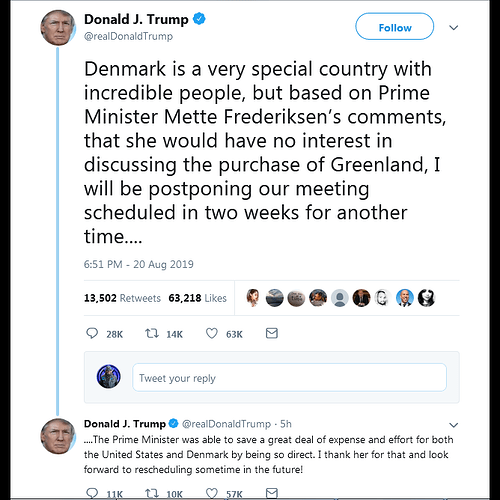 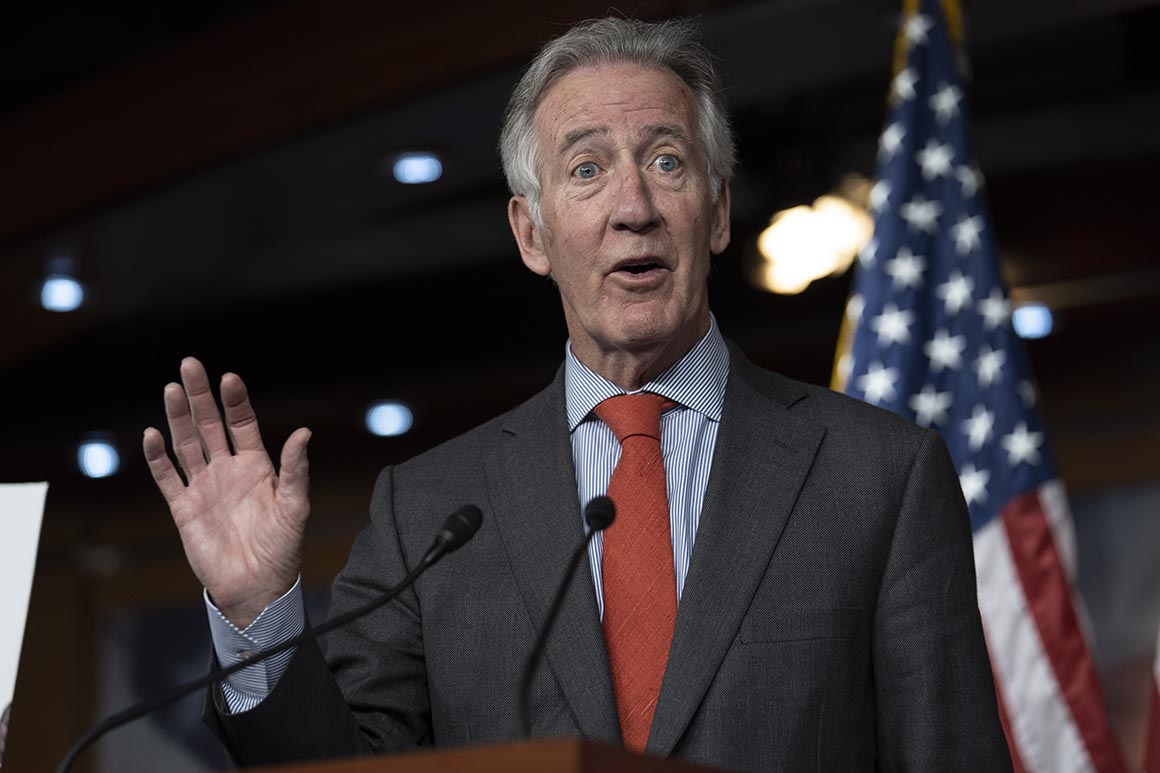 The allegations of interference in the audit process are a new twist in Neal’s effort to obtain six years’ worth of Trump’s personal returns.

A surprise development that could be the ammunition the House Ways and Means Committee needs to finally obtain Trump’s tax returns.

A whistleblower recently made “credible allegations” to the Ways and Means Committee of potentially wrongful interference with the IRS’ presidential audit process, lawyers for the House told a federal court Tuesday.

The disclosure was included in a motion by House Democrats asking Judge Carl Nichols to summarily order the Treasury Department to turn over President Donald Trump’s tax returns to Ways and Means Chair Richard Neal (D-Mass.). Part of the Democrats’ argument in the case is that they need Trump’s returns to review the effectiveness of the IRS’ routine audits of every president.

The motion included an Aug. 8 letter by Neal to Treasury Secretary Steven Mnuchin saying that Ways and Means received an “unsolicited communication” on July 29 “from a Federal employee setting forth credible allegations of ‘evidence of possible misconduct’ — specifically, potential ‘inappropriate efforts to influence’ the mandatory audit program.”

He asked Mnuchin to provide documents and communications “of specified Treasury and IRS employees” regarding the matter.

Mnuchin, in an Aug. 13 response that was also included in the Democrats’ court filing Tuesday, said Treasury didn’t have any pertinent records to provide and suggested Neal take his concerns to the IRS’ inspector general.

The allegations of interference in the audit process are a new twist in Neal’s effort to obtain six years’ worth of Trump’s personal returns, along with six years of some of his business returns. In July, Neal filed a federal lawsuit to enforce a subpoena for the returns.

In Tuesday’s filing, House Counsel Doug Letter asked for summary judgment in favor of all claims in Democrats’ complaint, saying “there are no genuine issues of material fact.” The filing included documents that again lay out the Democrats’ arguments for obtaining Trump’s returns, under a law that allows Neal to request them from Treasury.

“The Committee needs the requested information to evaluate the integrity of the IRS’s existing program for auditing Presidents’ tax returns — a need only heightened by the Committee’s receipt of whistleblower allegations about improper influence in that program,” the House attorneys said in a document filed with the motion Tuesday.
…
A Neal aide declined to comment on the whistleblower charge, but a footnote in Tuesday’s filing said the committee is prepared to offer the court confidential material on the undue influence allegation.

Side Note: There has been a lot of criticism about how slow Neal has been in filing this case and moving it ahead. (BTW, I agree with the critics.) His supporters say he needs to take his time and “do it right.” But now Neal’s slow progress is being used as an argument by Trump’s lawyers to slow down the process even more. Arrrrgh. I hope the judge is not buying it. And at the same time, I hope Neal picks up the pace. Here’s the “reasoning” from Trump’s lawyers:

“All told, it took the Committee 180 days to bring this suit (and still another 49 days after that before moving for summary judgment), with little to no explanation for its leisurely pace,” the attorneys said. “The Committee’s purported desire to consider legislation regarding the Presidential audit process does not require that the Court suddenly bring these proceedings to a gallop.”

P.S. Can someone please cross post this under House Investigations? Thanks. I tried to post it there, but I hit my “no-more-than-three-in-a-row” limit.

6 posts were merged into an existing topic: Mentionable News