And naturally, QAnon is involved. 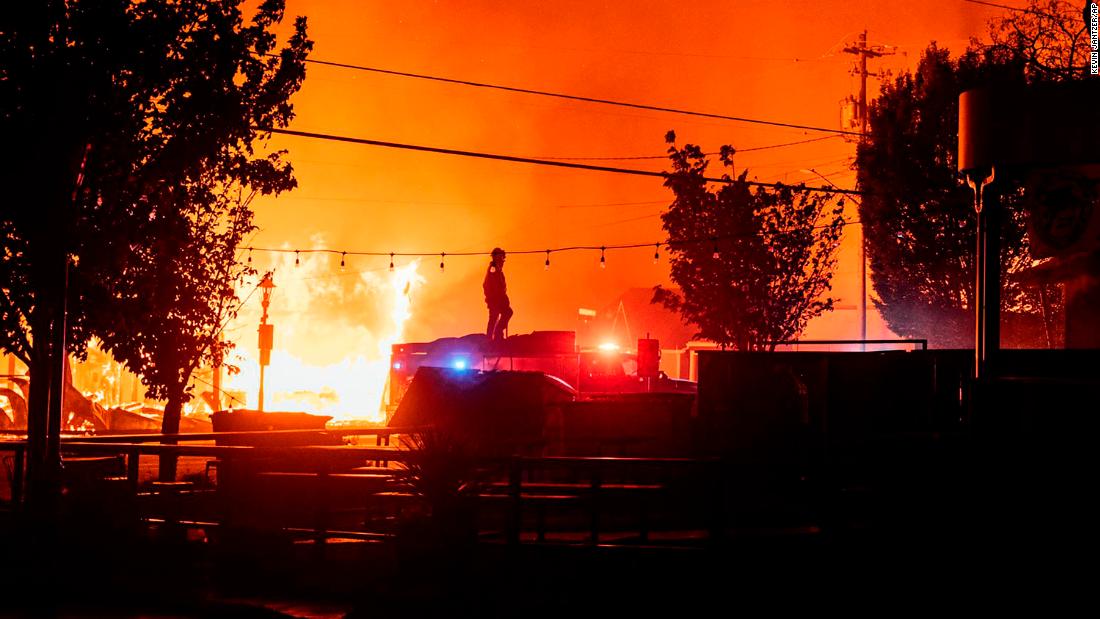 Authorities in Oregon are pleading with the public to only trust and share information verified by official sources about the unprecedented wildfires sweeping the state. The pleas come as law enforcement agencies described 911 dispatchers being...

Some clarification on Antifa - what it is or is not. Anti-fascists aren’t masterminding violence — and they don’t care for the Democratic Party.

Short for “anti-fascist,” the label “antifa” gained notoriety in 2017 over the course of several high-profile conflicts between left-wing protesters and the far right in Berkeley, Calif.; Portland, Ore.; Charlottesville; and elsewhere. But antifa has been a staple of radical politics across Europe, Latin America and beyond for decades. Even in the United States, this tradition of militant antifascism has a long history under the banner of the Anti-Racist Action network. Despite this history, and a litany of journalistic “explainers” over the past three years, antifa remains largely misunderstood. Here are some of the most popular myths.
>
Myth No. 1

Antifa is a single organization.

On May 31, President Trump tweeted, “The United States of America will be designating ANTIFA as a Terrorist Organization.” Attorney General William P. Barr echoed his sentiments by arguing that antifa is “a revolutionary group that is interested in some form of socialism.” Right-wing figure Chuck Callesto even claimed that Sen. Rand Paul intended to “SUBPOENA ANTIFA plane records, hotel records, all travel records & all funding.”

But Trump cannot designate “ANTIFA” as a terrorist organization because antifa is not an organization. Rather, it is a politics of revolutionary opposition to the far right. There are antifa groups, such as Rose City Antifa in Portland and NYC Antifa, just as there are feminist groups, such as Code Pink. But neither antifa nor feminism is itself an organization. You cannot subpoena an idea or a movement. That’s not to say that antifa doesn’t exist, of course. Antifa is “very real,” as Rep. Jim Jordan has argued, but not in the monolithic, hierarchical way in which he and many other Americans are accustomed to thinking of political associations.

Police stations were burned, squad cars were destroyed, and property was damaged across the country after the police killing of George Floyd in Minneapolis in May. Days later, Trump was quick to blame the violence on “ANTIFA and the Radical Left.” The president also promoted a far-right conspiracy theory that a 75-year-old racial justice protester in Buffalo who was shoved to the ground by police, fracturing his skull, “could be an ANTIFA provocateur.” Rudolph W. Giuliani concurred, claiming that “antifa sprang into action and in a flash hijacked the protests into vicious, brutal riots.”

But neither the Justice Department, the FBI nor the press have found evidence to corroborate the grandiose allegation that the most widespread and significant political upheaval this country has seen in half a century was masterminded by one shadowy organization. Not even in Portland. Antifa groups are simply not numerous enough, nor their memberships large enough, nor their politics influential enough to have achieved such massive destruction. Militant anti-fascist groups heavily vet potential members to prevent infiltration from law enforcement or the far right. Some don’t open their ranks to new members at all. Significant investments of time and energy are expected. Such high barriers to entry necessarily keep numbers low.

Antifa is affiliated with the Democratic Party.

In August, a fake antifa website began to redirect users to Joe Biden’s campaign site. Though it was clearly a ploy to associate the Democratic Party with antifa, right wingers seized upon the apparent conspiracy. Speaking about the Democrats that same day, Trump claimed that “in my book, it’s virtually part of their campaign, antifa.” According to Ann Coulter, the Democrats are “the Antifa Party.” And columnists have argued that “antifa riots may be part of [a] Democrat power grab” or even that “antifa is the militant wing of the Democratic Party.”

Not only is there no evidence to support such allegations — which are more of an effort to associate liberalism with lawlessness than anything else — but Democratic leaders have routinely condemned antifa and political violence more broadly. For example, in 2017 Nancy Pelosi denounced “the violent actions of people calling themselves antifa” after destructive protests against right-wing commentator Milo Yiannopoulos in Berkeley. When a reporter recently asked Joe Biden, “Do you condemn antifa?,” he responded, “Yes, I do.”

Nor is there any antifa love affair with the Democrats. The vast majority of antifa militants are radical anti-capitalists who oppose the Democratic Party. Some may hold their noses and vote for Biden in November, but many are anarchists who don’t vote at all.

Antifa is funded by liberal financiers like George Soros.

Right-wing conspiracy theorists have alleged that egalitarian protest movements, such as Occupy Wall Street or the women’s marches, have been secretly funded for many years by liberal financiers like George Soros. Trump is among those who have accused Soros of funding antifa, while other conservatives, such as Rep. Ken Buck, have dog-whistled this anti-Semitic trope by asking in more general terms “who is funding these violent riots.” Similarly, Rand Paul asked, after being confronted by protesters in D.C.: “Who paid for their hotel rooms? Who flew them in?”

There is no evidence that Soros or any other 1 percenter is bankrolling antifa groups. Receiving financial support from a billionaire would be anathema to their anti-capitalist politics. Like most anarchist, anti-authoritarian or radical groups, antifa organizations don’t have much money at their disposal. What they do have generally comes from members or occasional solidarity fundraisers. Unlike political parties, unions or nongovernmental organizations, they don’t require significant funds. The International Anti-Fascist Defense Fund collects small donations primarily for legal and medical support, but that hardly constitutes the moneyed boogeyman that Republicans have conjured.

Antifascists are the ‘real fascists.’

Recently Barr described antifa as deploying “fascistic” tactics, and Donald Trump Jr. characterized the movement as having moved “to the book burning phase.” The Internet is awash with articles about how “antifa are the real fascists,” as the Spectator’s Toby Young put it, or the “brownshirts” of the Democratic Party, in radio host Michael Savage’s words. After Charlottesville, Trump called antifascists the “alt-left,” a term that did not stick. These portrayals are often supported by references to antifascists’ disruption of the events of their (far-right) political opponents — a strategy famously deployed by fascists.

Indeed, antifascists and fascists have one thing in common: an illiberal disdain for the confines of mainstream politics. In every other way they are worlds apart. As opposed to their far-right adversaries, antifascists are feminist, anti-racist, anti-capitalists who seek to abolish prisons and police. Comparing antifascists to fascists only makes a bit of sense if one divorces the tactics from the underlying views that animate them. Such comparisons stem from the misguided horseshoe theory: that ultimately political extremes meet. But fascists are the real fascists because they pursue a fascist political agenda.