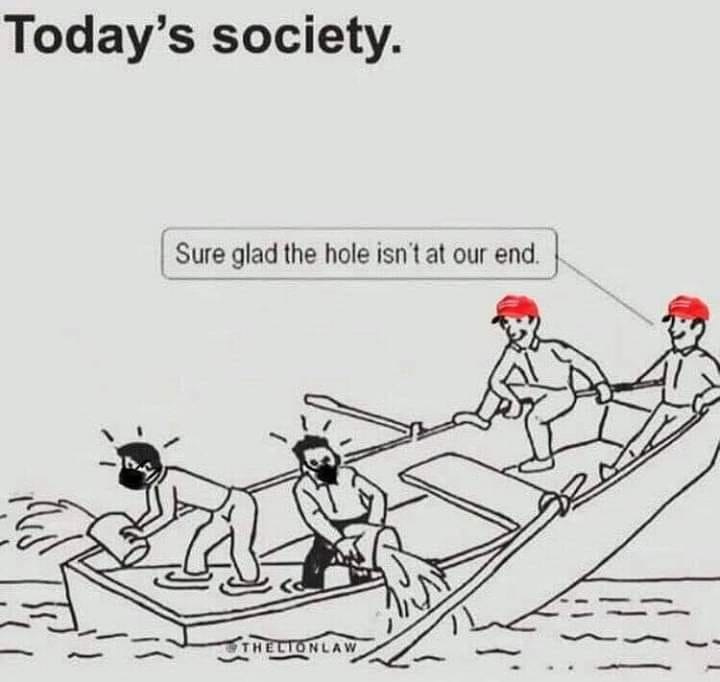 (I hate to point out that “the hole” actually IS at their end… in fact, he’s in charge-

This does pass as both truth AND humor. 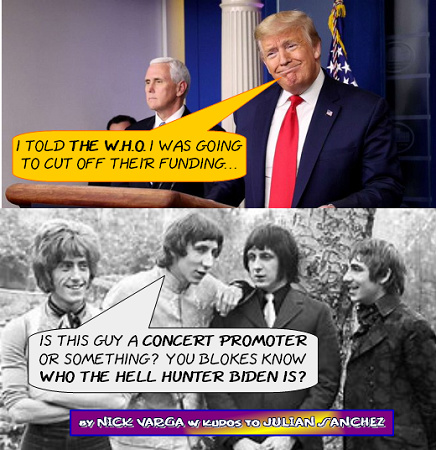 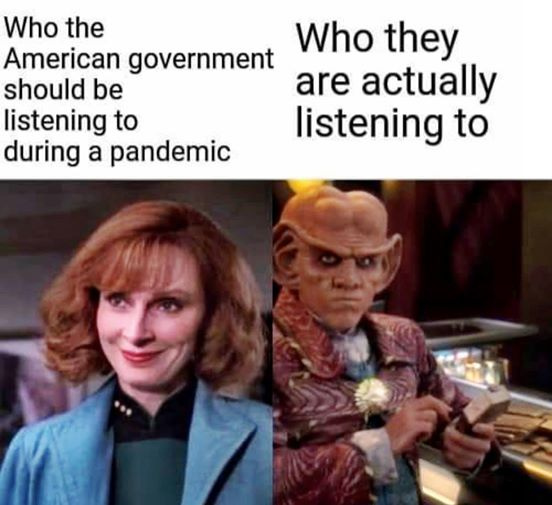 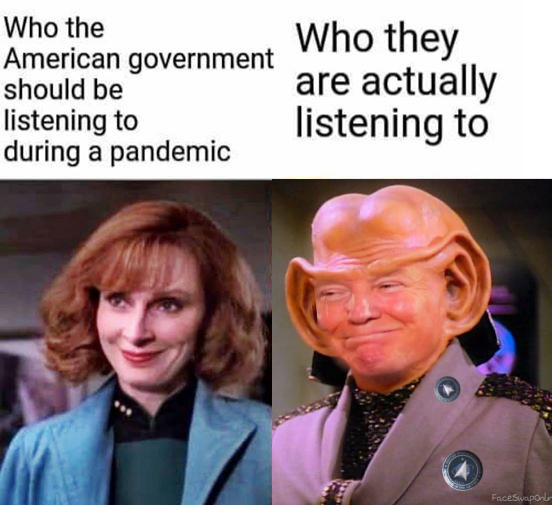 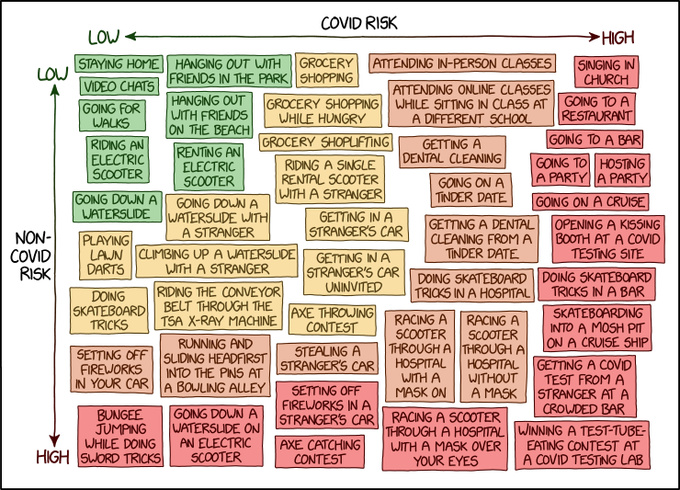 This is a good one to share, it’s funny and makes the point clear. 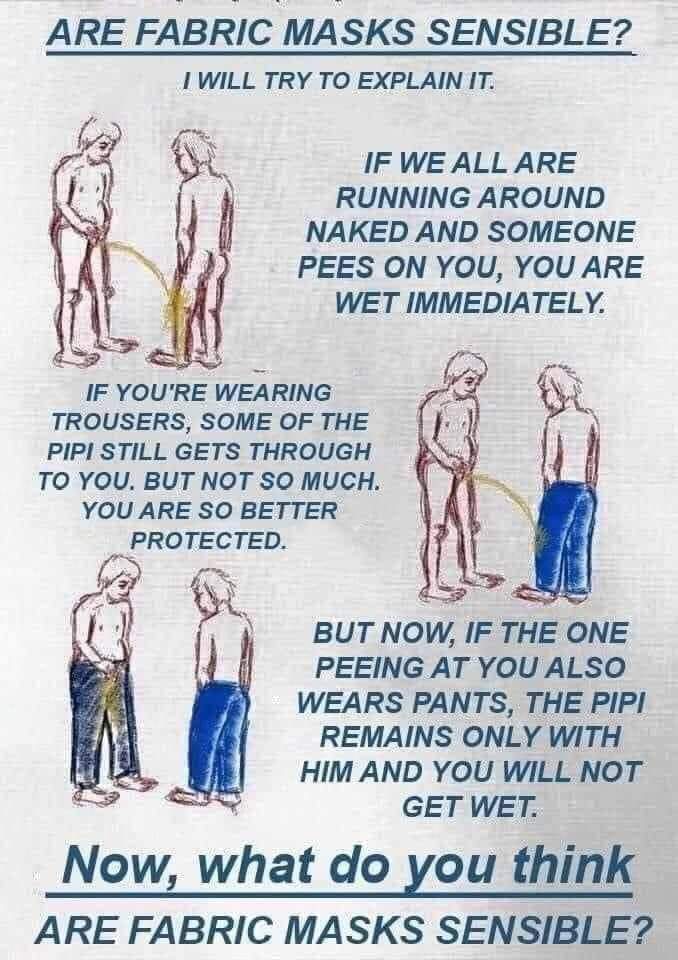 Putting this here because it’s not news but the headline is very funny. Of course… Mary Trump on whether she ever heard the president use a racial slur: 'Of course...

In an interview with MSNBC's Rachel Maddow, the president's niece also said she has heard him make anti-Semitic remarks.

Was there any doubt he uses this kind of language at home?

Trump Sues the Coronavirus for Treating Him Unfairly

Offering a preview of his lawsuit, Trump said that he was accusing the coronavirus of meddling in the 2020 election.

“This is a very nasty virus, and by that I mean it has been nasty to me personally,” Trump told reporters. “I never thought that there could be anything more terrible than Jim Acosta, but the coronavirus is like an invisible Jim Acosta.”

Offering a preview of his lawsuit, Trump said that he was accusing the coronavirus of meddling in the 2020 election.

“You look at the numbers and, every time the virus’s numbers go up, my numbers go down,” he said. “This virus is trying to rig the election for Sleepy Joe.”

Trump said that he was prepared to take his case against the coronavirus all the way to the Supreme Court, claiming, “My case is so perfect, even those ungrateful beauties Kavanaugh and Gorsuch will side with me.”

Relations between Trump and the virus have reportedly grown so strained that he no longer allows discussions of the coronavirus at meetings of the Coronavirus Task Force.

At the White House, the press secretary, Kayleigh McEnany, said that Trump felt “deeply betrayed” by the coronavirus.

“ COVID -19 would not be what it is today without President Trump,” she said. 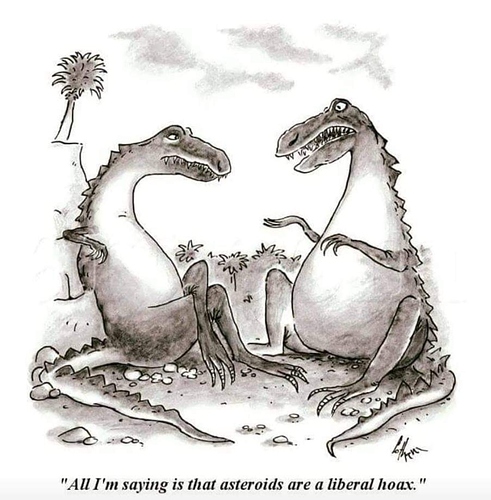 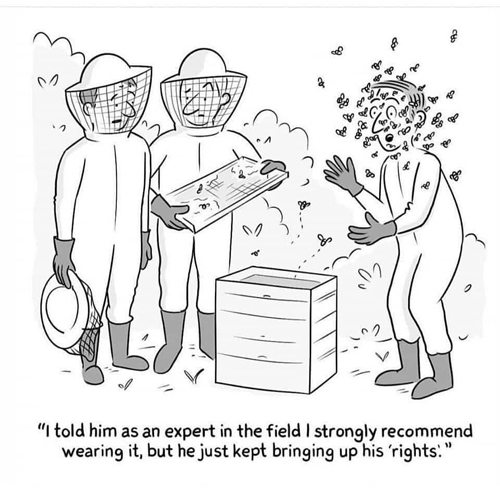 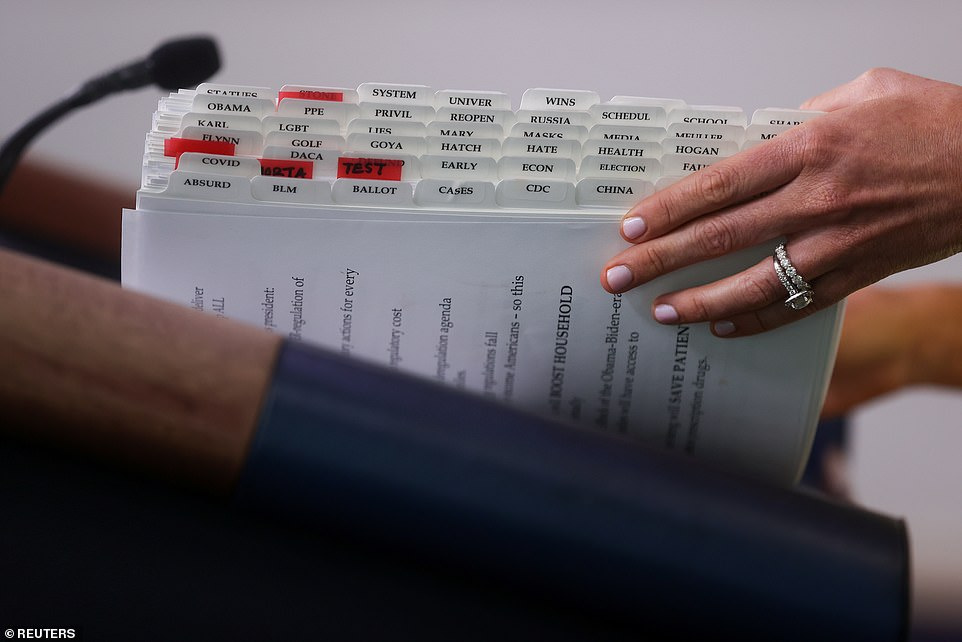 image.jpg962×642 107 KB
What’s in the briefing book: The A-Z of what Kayleigh McEnany brings to the White House podium shows what’s going on inside the West Wing - and what they think will be the focus of questions. Some are more mysterious than others, including ‘system,’ ‘univer’ and a tantalizing 'sha’ 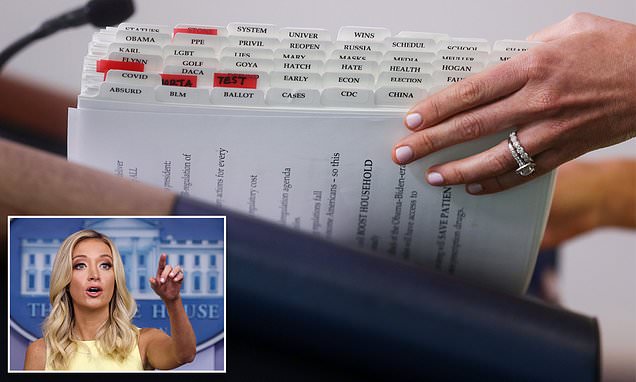 In fact, ‘Lies’ are one of the many topics that merited a special binder tab in McEnany’s briefing book as she faced the press Thursday for one of her occasional question-and-answer sessions.

‘Fauci’ was another, indicating she was anticipating questions about the nation’s infectious disease expert Anthony Fauci, who was the subject of White House attacks this week amid the coronavirus pandemic.

Unusually, a photographer captured her binder close-up, offering insight into what she anticipates being asked about.

Some of the topics are the names of critics new and old.

Robert Mueller is featured, presumably because of his op-ed at the weekend slamming the commutation of Roger Stone’s sentence, saying he ‘remains a convicted felon, and rightly so.’

Mary must be a reference to Mary Trump whose bombshell book this week paints her uncle as a sociopath and racist and who piled on after the briefing by telling MSNBC’s Rachel Maddow that she had heard him use the N-word.

Hogan is a reference to Larry Hogan, the Republican governor of Maryland who slammed Trump’s virus response on Thursday and also revealed how the president hurled insults about South Korean people in front of his South Korean-born wife. 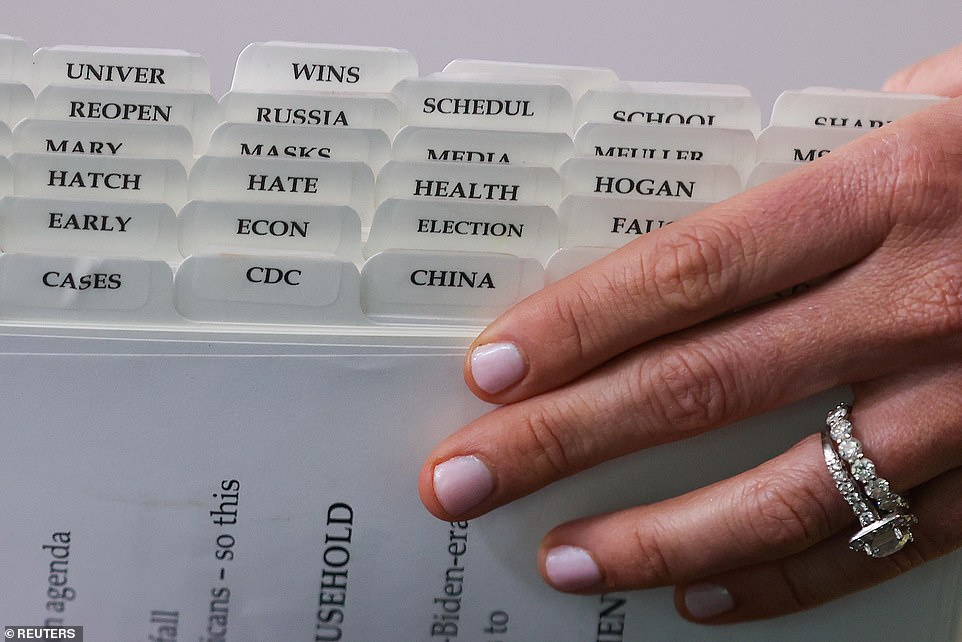 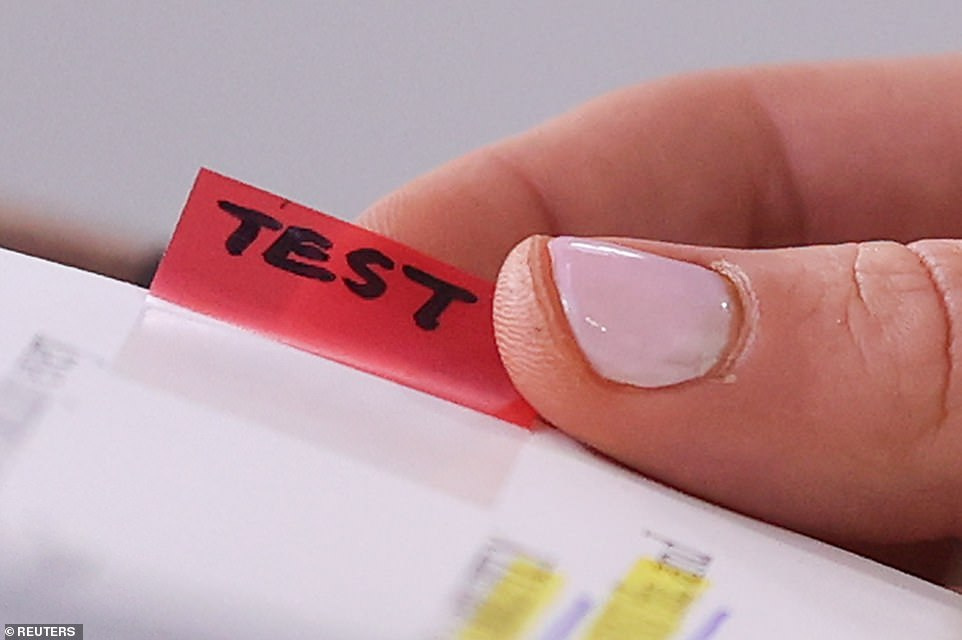 image.jpg962×640 89.7 KB
Red letter topic: One area of concern was highlighted in a hand-written red tab

Other topics on the mind of the polished spokeswoman and her staff include ‘Golf’ and Goya.’ The president golfed twice last weekend amid the pandemic, after repeatedly attacking President Barack Obama’s golf habit in 2016 and before.

In fact, the former president merits his own binder tab more than three years into Trump’s term.

Goya is a reference to the food company that drew a boycott when the CEO came to a White House event and praised the president. Ivanka hit back by posting an image with herself holding a can of black beans.

The president followed suit with a picture of him showcasing an array of Goya products inside the Oval Office. The Hatch Act, which governs use of the White House to promote companies, would apply to the president’s daughter but not to the president himself – a story the press could explore by asking about another tab: ‘Hatch.’

Other culture war topics include ‘statutes,’ which Trump opposes being topples and ‘BLM,’ - Black Lives Matter - which he called a hate group before the words were painted outside Trump Tower in New York.

Also present is ‘ballots’ presumably in readiness for questions about Trump’s continued opposition to voting by mail, which he does himself. The topic is slightly close to home for McEnany; she votes by mail herself. 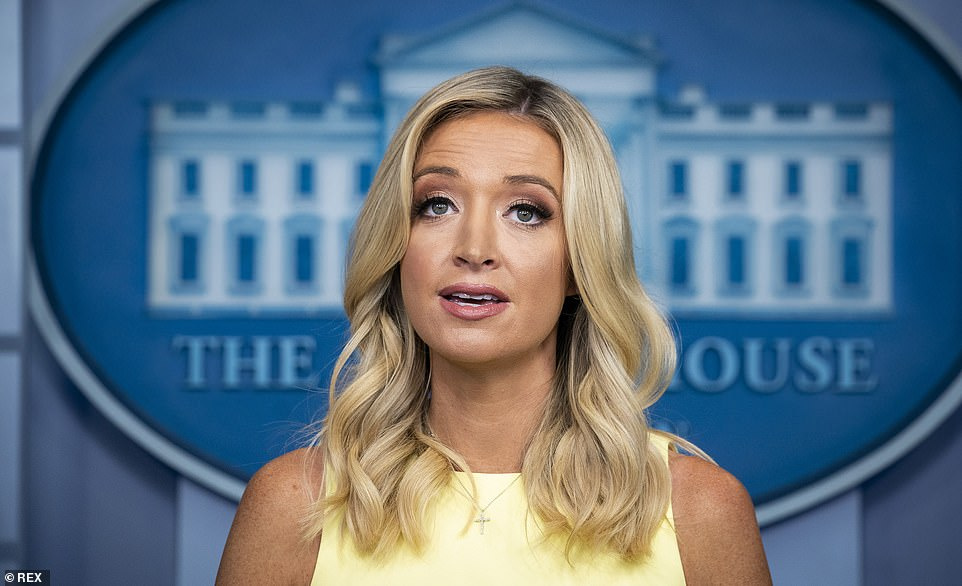 image.jpg962×586 138 KB
White House Press Secretary Kayleigh McEnany often turns to the binder for facts and pre-written statements where she attacks the media and defends the president. She also fires at the media off the cuff

One topic is even closer to home for the spokeswoman - ‘Karl,’ an apparent reference to Jonathan Karl, the ABC News White House correspondent who is president of the White House Correspondents Association and who penned a scathing op-ed about McEnany’s briefings, calling them ‘political stunts.’

Other tabs feature a cast of familiar Trump-world characters, from ‘Flynn’ – fired national security advisor Mike Flynn – and ‘Stone’ – longtime advisor Roger Stone. Trump commuted the 40-month jail sentence Stone was about to begin, but McEnany recently fielded a question about whether it also would apply to Stone’s home confinement, an issue still up in the air.

A possible blanket topic is filed under ‘Absurd.’

‘Mary’ was almost certainly a reference to Mary Trump, who has been on a media tour for her new book where she calls her uncle unfit for office and claims he paid someone to take his SATs for him.

The presence of ‘Stone,’ ‘Mueller,’ ‘Flynn,’ and ‘Russia’ suggest however that it is the special counsel inquiry and its consequences which disproportionately occupy the focus of the West Wing.

McEnany, a Harvard-trained lawyer, has parroted the president’s language, calling the Russia probe a ‘hoax.’

Other articles about it: 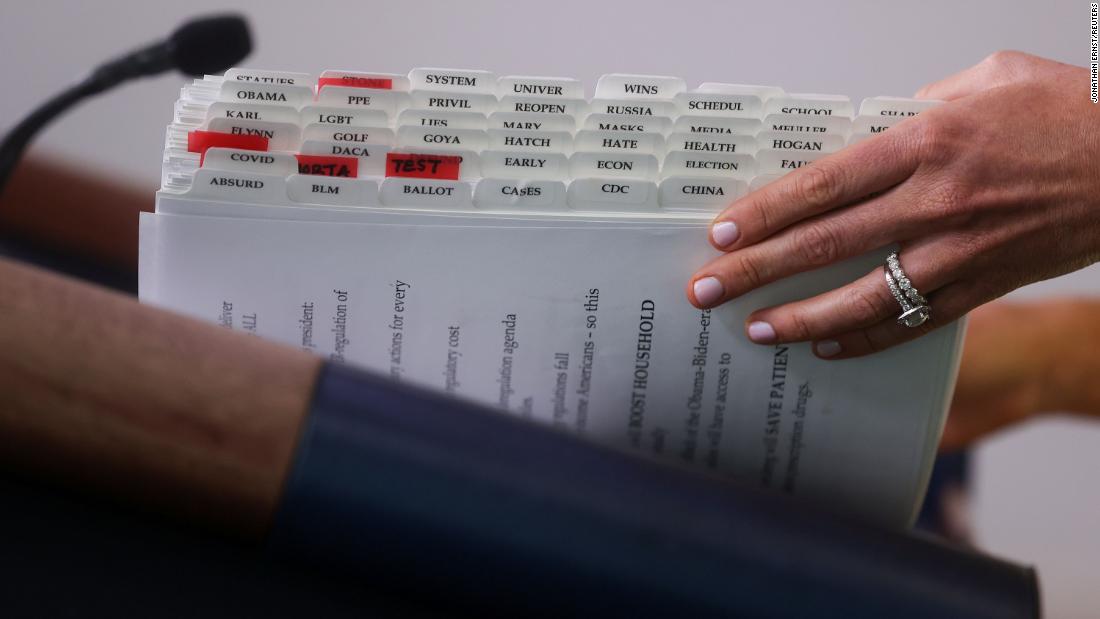 Analysis | Here’s what Kayleigh McEnany would like to talk about

An unusual look at her binder of rhetoric. The CNN one is especially good, going over each tab. 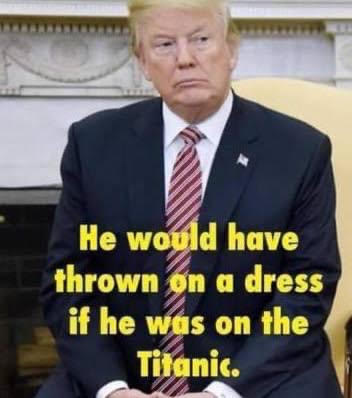 Marco Rubio and Dan Sullivan were each trying to honor Mr. Lewis on social media when they mistakenly posted photos of Mr. Cummings, a Black congressman who died in October. 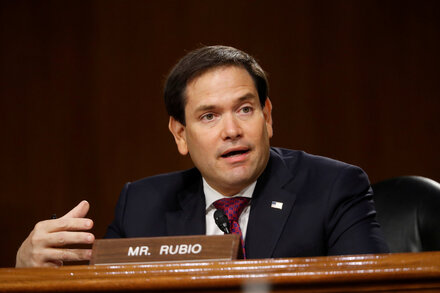 Marco Rubio and Dan Sullivan were each trying to honor Mr. Lewis on social media when they mistakenly posted photos of Mr. Cummings, a Black congressman who died in October.

Sen. Marco Rubio of Florida and Sen. Dan Sullivan of Alaska mixed up the two Black lawmakers on Saturday in an attempt to honor Lewis, who died Friday night. Sen. Marco Rubio of Florida and Sen. Dan Sullivan of Alaska mixed up the two Black lawmakers on Saturday in an attempt to honor Lewis, who died Friday night. 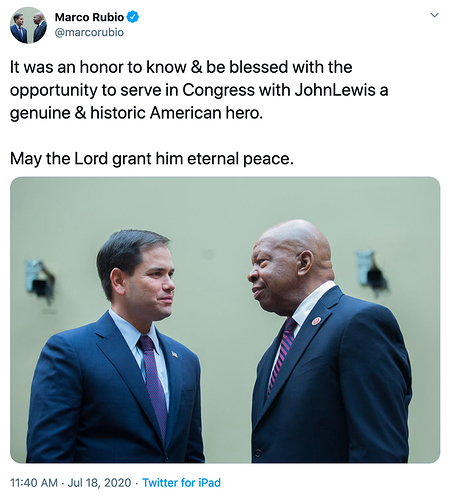 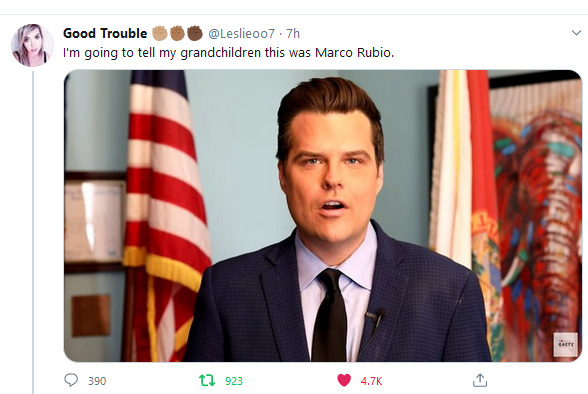 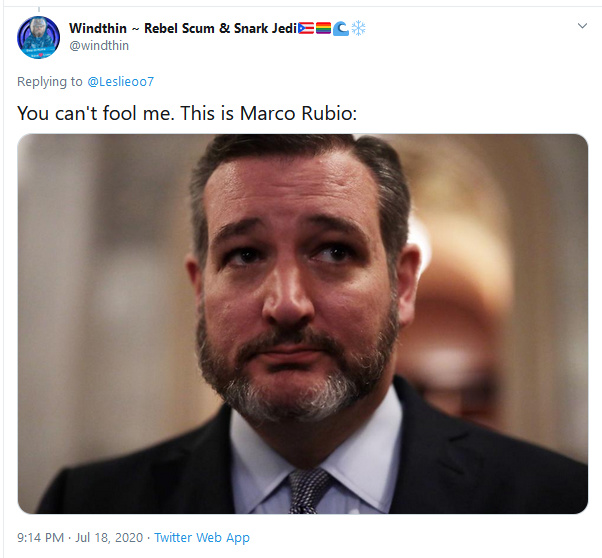 Whenever his mouth is moving…He’s lying. 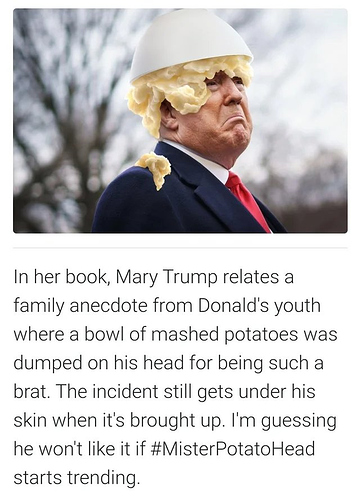 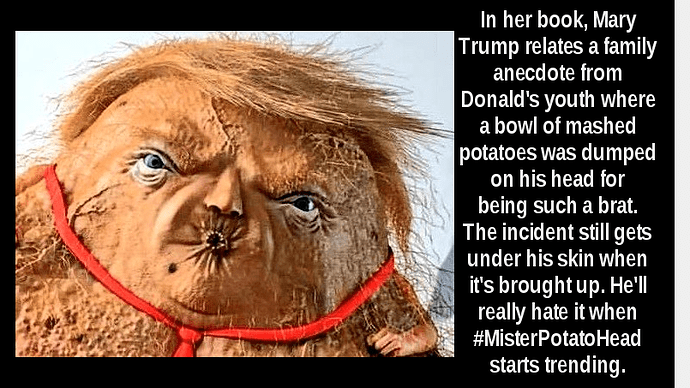