Stacy Blatt was in hospice care last September listening to Rush Limbaugh’s dire warnings about how badly Donald J. Trump’s campaign needed money when he went online and chipped in everything he could: $500.

It was a big sum for a 63-year-old battling cancer and living in Kansas City on less than $1,000 per month. But that single contribution — federal records show it was his first ever — quickly multiplied. Another $500 was withdrawn the next day, then $500 the next week and every week through mid-October, without his knowledge — until Mr. Blatt’s bank account had been depleted and frozen. When his utility and rent payments bounced, he called his brother, Russell, for help.

What the Blatts soon discovered was $3,000 in withdrawals by the Trump campaign in less than 30 days. They called their bank and said they thought they were victims of fraud.

Over all, the Trump operation refunded 10.7 percent of the money it raised on WinRed in 2020; the Biden operation’s refund rate on ActBlue, the parallel Democratic online donation-processing platform, was 2.2 percent, federal records show.

Half of Republicans believe the insurrection was a non-violent protest or was the handiwork of left-wing activists, and 6 in 10 believe the election was stolen from Trump.

Since the deadly Jan. 6 insurrection at the U.S. Capitol, former President Donald Trump and his Republican allies have pushed false and misleading accounts to downplay the event that left five dead and scores of others wounded. His supporters appear...

Trump urges court to throw out congressional subpoena to Mazars

Gasp. What a surprise to discover that the Jan. 6th rioters were motivated by racism. Gasp. 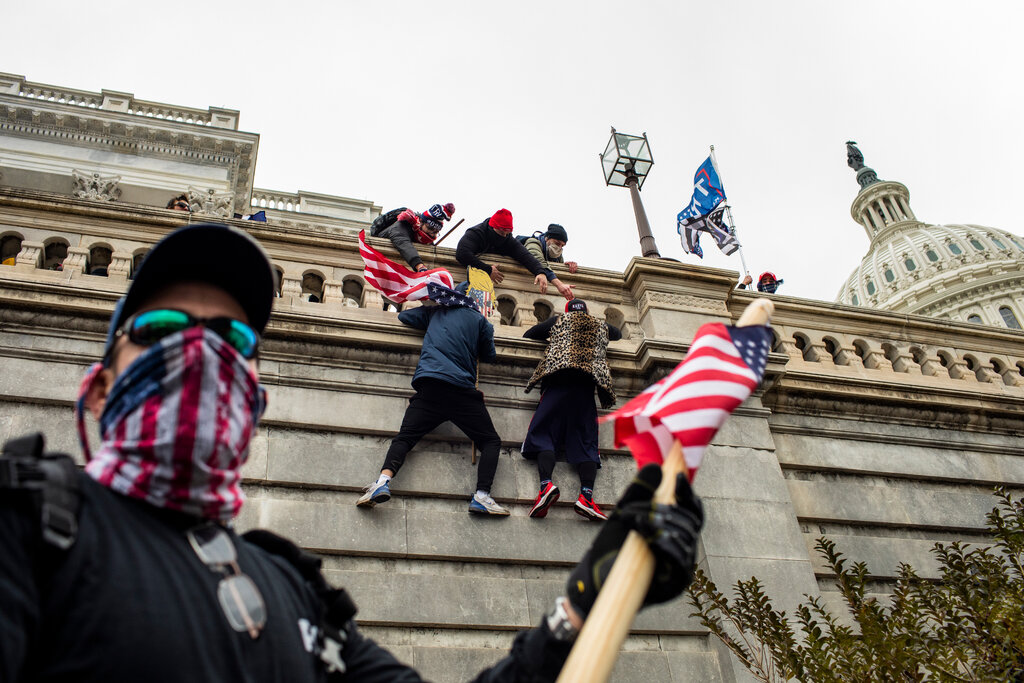 Counties with the most significant declines in the non-Hispanic white population were the most likely to produce insurrectionists.

Interesting article from Tribune Above. @Windthin - putting the body of the article here. Hard to understand their headline…even if you wrote it.

Interesting twist…all T can do is kick it back…and kick it back. It will come back and he’s already lost it to NY State where they have to keep the financial records under wraps, with Congress, not so much.

Former President Donald Trump on Monday urged a judge to throw out a congressional subpoena for his financial records, calling it unconstitutional and unenforceable.

The former president asked a federal judge in Washington, D.C., for summary judgment — a ruling in his favor without a trial — in a House Oversight lawsuit seeking an order to force Mazars USA, Trump’s accounting firm, to turn over the documents.

“The Mazars subpoena remains a demand for the president’s information, based on president-specific justifications, subject to president-specific defenses,” Trump’s lawyers wrote in their request for the summary judgment. “The committee’s justifications concerning the Trump Presidency cratered once he stopped being president, but the separation-of-powers concerns with these sorts of subpoenas did not.”

The fight over the subpoena reached the Supreme Court, which ruled that congressional subpoenas seeking the president’s personal information must be “no broader than reasonably necessary” and ordered lower courts to determine whether the House’s request met that standard.

The Mazars dispute is only one strand of a complex series of legal battles centered on Trump’s tax information, which he insisted on keeping secret throughout his presidency.

House Democrats are separately seeking Trump’s tax returns under a law that allows congressional tax committees to examine any taxpayer’s filings. The Treasury Department under Trump refused to turn over the requested six years of Trump’s personal and business tax returns.

Manhattan District Attorney Cyrus Vance has obtained Trump’s tax records from Mazars as part of a criminal investigation into the former president’s business dealings. Those documents won’t be made public though unless some are presented as evidence at a trial.

The case is Trump v. Committee on Oversight and Reform of the U.S. House of Representatives, 19-cv-01136, U.S. District Court, District of Columbia (Washington).

After years of defending Trump, the former president’s aides now say there’s no help to come to Rep. Gaetz because he is “a grenade whose pin had already been pulled.” MSNBC’s Ari Melber is joined by The Nation’s Elie Mystal to discuss the new...

The New York Times reporting Rep. Matt Gaetz privately asked for a blanket pre-emptive pardon during Trump’s final days in office, but was rebuffed by the White House. The Times quotes "two people told of the discussions." Gaetz is currently facing...

Matt Gaetz, Loyal for Years to Trump, Is Said to Have Sought a Blanket Pardon

The congressman was at the time under investigation over whether he violated sex trafficking laws, though it was unclear what he knew of the inquiry.

Matt Gaetz sought a preemptive pardon from Trump, but the request was never...

Rep. Matt Gaetz sought a preemptive pardon for himself near the end of President Donald Trump's term and made his request known to someone outside the White House Counsel's office, according to two people familiar with the matter, but Gaetz's request...

Trump claims Gaetz 'never asked me for a pardon'

It's "unclear" if Gaetz directly spoke with Trump about pardon he asked the White House for, the New York Times reported earlier this week.

Donald Trump's two-sentence statement on Wednesday was the first time he spoke out publicly on news Gaetz was under a federal criminal investigation.

And that may lead to a resignation…maybe.

The House Ethics committee on Friday said it would launch an investigation into Rep. Matt Gaetz (R-Fla.), who has been accused of sexual misconduct, among a litany of other things. The Justice Department is investigating Gaetz for an alleged relationship with a 17-year-old girl.

In a statement Friday, the committee chairman said they were aware of allegations that Gaetz “may have engaged in sexual misconduct and/or illicit drug use, shared inappropriate images or videos on the House floor, misused state identification records, converted campaign funds to personal use, and/or accepted a bribe, improper gratuity, or impermissible gift, in violation of House Rules, laws, or other standards of conduct.”

Gaetz has not been charged with any crimes and has denied the allegations, claiming he and his family are the victims of an extortion plot. The White House is also preparing to step up negotiations over Biden’s $2 trillion jobs and infrastructure package with Congress’s return to Washington next week.

WASHINGTON (Reuters) - A federal grand jury in San Francisco on Friday indicted four members of a militia group associated with the right-wing Boogaloo movement of conspiracy to obstruct justice in connection with an investigation into the shooting of two federal agents last year, the U.S. Justice Department said.

According to court documents, the four men conspired to destroy communications and other records relating to the May 29, 2020, murder and attempted murder of two federal security officers in Oakland, California, the department said in a statement.