Yes! What a relief that Zuckerberg would withhold their Overview Board’s recommendation to continue to ban Trump.

Facebook’s independent Oversight Board ruled to uphold the company’s January decision to suspend the Facebook and Instagram accounts of former President Donald Trump.

But, the board said, the indefinite timeframe of the suspension “was not appropriate.” The board effectively punted the decision back to Facebook, saying it “insists” the company “review this matter to determine and justify a proportionate response that is consistent with the rules that are applied to other users of its platform.”

The board asked that Facebook complete the review within six months and made suggestions for how to create clear policies that balance public safety and freedom of expression.

The decision will ensure Trump remains blocked from posting or having a presence on the social media company’s services for now, as Facebook CEO Mark Zuckerberg committed to following the board’s recommendation, though Facebook is not bound to do so.

Facebook first suspended Trump’s accounts following the Jan. 6 insurrection on the U.S. Capitol. The suspension was Facebook’s most aggressive action against Trump during his four-year term.

“We believe the risks of allowing the President to continue to use our service during this period are simply too great,” Zuckerberg wrote in a post on his Facebook page at the time.

Facebook referred the decision to its Oversight Board a few weeks later, saying that given the significance of the decision, “we think it is important for the board to review it and reach an independent judgment on whether it should be upheld.”

The decision to uphold Trump’s suspension is the most significant action taken thus far by Facebook’s Oversight Board, which was launched in October 2020 as a de facto “Supreme Court” for the company’s content moderation decisions. The board is an independent body made up of civic, technological, free speech, journalism and human rights experts from around the world.

Facebook has agreed to abide by the Oversight Board’s rulings, even though Zuckerberg still has undisputed control of the company, with majority voting control over the company’s shares.

The Oversight Board found that Trump had “severely violated” Facebook’s community standards with his posts on Jan. 6.

His declarations, “We love you. You’re very special,” referring to the people who rioted around the U.S. Capitol, calling the rioters “great patriots” and telling them to “remember this day forever,” violated Facebook’s rules that prohibit praise of people engaged in violence, the board wrote.

“The Board found that, in maintaining an unfounded narrative of electoral fraud and persistent calls to action, Mr. Trump created an environment where a serious risk of violence was possible,” the board wrote, adding that when Trump posted his statements, “there was a clear, immediate risk of harm and his words of support for those involved in the riots legitimized their violent actions.”

This story is developing. Refresh for updates.

Donald Trump’s response to social media bans is… a blog

Mere hours before Facebook's Oversight Board announced its ruling as to whether or not it will allow the former president back onto its platform, Trump seized the initiative and unveiled a brand new communications platform of his very own..

Every politician handles the ends of their careers differently. Some retired legislators take up public speaking gigs, some continue their beloved philanthropic endeavors, and some just go for long walks in the woods. Not Donald Trump, mind you. America’s 45th (but not final) president has steadfastly focused on what he does best: unloading every single asinine and toxic thought that rattles out of his conspiracy-addled noggin directly onto the internet. That has been a bit of a challenge in recent months, what with him having gotten himself unceremoniously banned from virtually every English-speaking social media site on the planet on account of all his unfounded election stealing allegations and incitement ahead of the January 6th Capitol Hill insurrection.

But no longer! Mere hours before Facebook’s Oversight Board announced its ruling as to whether or not it will allow the former president back onto its platform, Trump seized the initiative and unveiled a brand new communications platform of his very own. Take that, Big Social Media! Behold the awesome golden glory of From the Desk of Donald J. Trump , a whole entire web page dedicated to giving Trump what he so desperately desires: somewhere on the internet where he can complain about how the rest of the internet is so mean and unfair to him.

The page will allow Trump to post comments, images, and videos. According to Fox News , the page appears to be powered by Campaign Nucleus, a"digital ecosystem made for efficiently managing political campaigns and organizations," which was built by his former campaign manager, Brad Parscale, whom Trump has previously threatened to sue.

And true to the former president’s style, this won’t be a traditional sort of social network. This is a one-way means of communication. Trump posts and we unwashed masses are to suckle upon his perky bronzed teats for business and political wisdom. Not to mention a healthy dose of Q-Anon conspiracy and old-fashioned fascism.

And yes, before you ask, the web page is of course built to the same exacting standards as every other Trump property:

Trump tried to tag OANN in a statement: https://t.co/PXzWM2ToSc 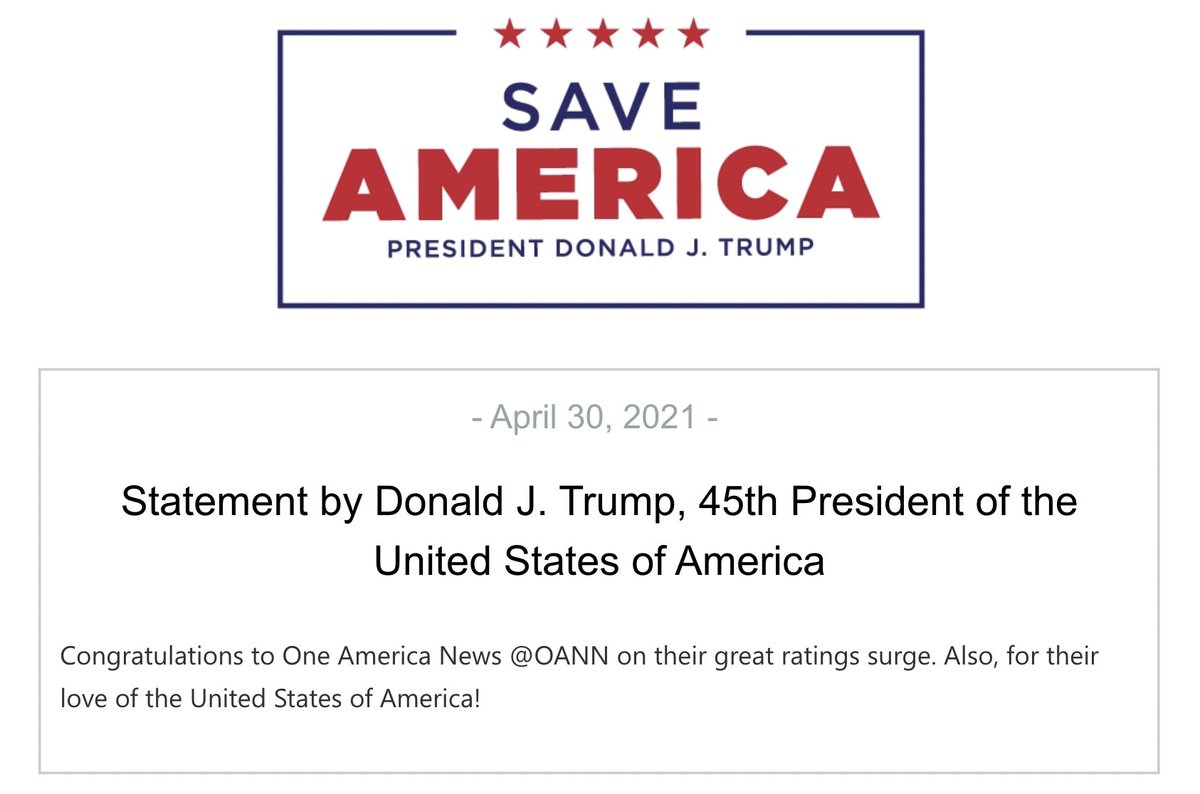 Here’s the way Trump with the help of a Republican businessman Russell J Ramsland Jr who wanted to interpret the election results only for Trump by questioning election results and calling it fraud. How an obscure Texas security company helped convince Americans the 2020...

Russell J. Ramsland Jr. has sold everything from Tex-Mex food to a light-therapy technology. Starting two years ago, he helped sell the notion that votes in U.S. elections were being manipulated.

The making of a myth

technology.Then he sold the story that the 2020 election was stolen from Trump.

ADDISON, Tex. — Key elements of the baseless claim that the 2020 election was stolen from President Donald Trump took shape in an airplane hangar here two years earlier, promoted by a Republican businessman who has sold everything from Tex-Mex food in London to a wellness technology that beams light into the human bloodstream.

At meetings beginning late in 2018, as Republicans were smarting from midterm losses in Texas and across the country, Russell J. Ramsland Jr. and his associates delivered alarming presentations on electronic voting to a procession of conservative lawmakers, activists and donors.

Briefings in the hangar had a clandestine air. Guests were asked to leave their cellphones outside before assembling in a windowless room. A member of Ramsland’s team purporting to be a “white-hat hacker” identified himself only by a code name.

Ramsland, a failed congressional candidate with a Harvard MBA, pitched a claim that seemed rooted in evidence: Voting-machine audit logs — lines of codes and time stamps that document the machines’ activities — contained indications of vote manipulation. In the retrofitted hangar that served as his company’s offices at the edge of a municipal airstrip outside Dallas, Ramsland attempted to persuade failed Republican candidates to challenge their election results and force the release of additional data that might prove manipulation.

“We had to find the right candidate,” said Laura Pressley, a former Ramsland ally whose own claim that audit logs showed fraud had been rejected in court two years earlier. “We had to find one who knew they won.”

He made the pitch to Don Huffines, a state senator in Texas. Huffines declined.

No candidate agreed to bring a challenge, and the idea of widespread vote manipulation remained on the political fringe — until 2020, when Ramsland’s assertions were seized upon by influential allies of Trump. The president himself accelerated the spread of those claims into the GOP mainstream as he latched onto an array of baseless ideas to explain his loss in November.

The enduring myth that the 2020 election was rigged was not one claim by one person. It was many claims stacked one atop the other, repeated by a phalanx of Trump allies. This is the previously unreported origin story of a core set of those claims, ideas that were advanced not by renowned experts or by insiders who had knowledge of flawed voting systems but by Ramsland and fellow conservative activists as they pushed a fledgling company, Allied Security Operations Group, into a quixotic attempt to find evidence of widespread fraud where none existed.

To assemble a picture of the company’s role, The Washington Post obtained emails and company documents and interviewed 12 people with direct knowledge of ASOG’s efforts, as well as former federal officials and aides from the Trump White House. Many spoke on the condition of anonymity to discuss private matters or out of fear of retribution. Three individuals who were present in the hangar for those 2018 meetings spoke about the gatherings publicly for the first time.

By late 2019, ASOG’s examination had moved beyond audit logs. Among other claims, Ramsland was repeating the ominous idea that election software used in the United States originated in Venezuela and saying nefarious actors could surreptitiously manipulate votes on a massive scale. As the 2020 election approached, he privately briefed GOP lawmakers in Washington and met with officials from the Department of Homeland Security, documents and interviews show.

ASOG’s examination by last summer had already cost more than $1 million, according to a document the company gave government officials that was obtained by The Post. Ramsland had sought funding from Republican donors whose fortunes were made in the oil, gas and fracking industries, Pressley said.

After the Nov. 3 election, to an extent not widely recognized, Ramsland and others associated with ASOG played key roles in spreading the claims of fraud, The Post found. They were circulated by Rep. Louie Gohmert (R-Tex.), a staunch Trump ally who had been briefed by ASOG. And Ramsland’s assertions were incorporated in the “kraken” lawsuits filed by conservative lawyer Sidney Powell — who The Post learned had also been briefed two years earlier by ASOG — and aired publicly by Rudolph W. Giuliani, then Trump’s personal attorney, as they tried to overturn Joe Biden’s victories in key states.

During that period, Trump was hyper-focused on making the case that the election had been rigged, former White House aides said. He would listen to “literally anyone” who had a theory about it, in the words of one former senior administration official.