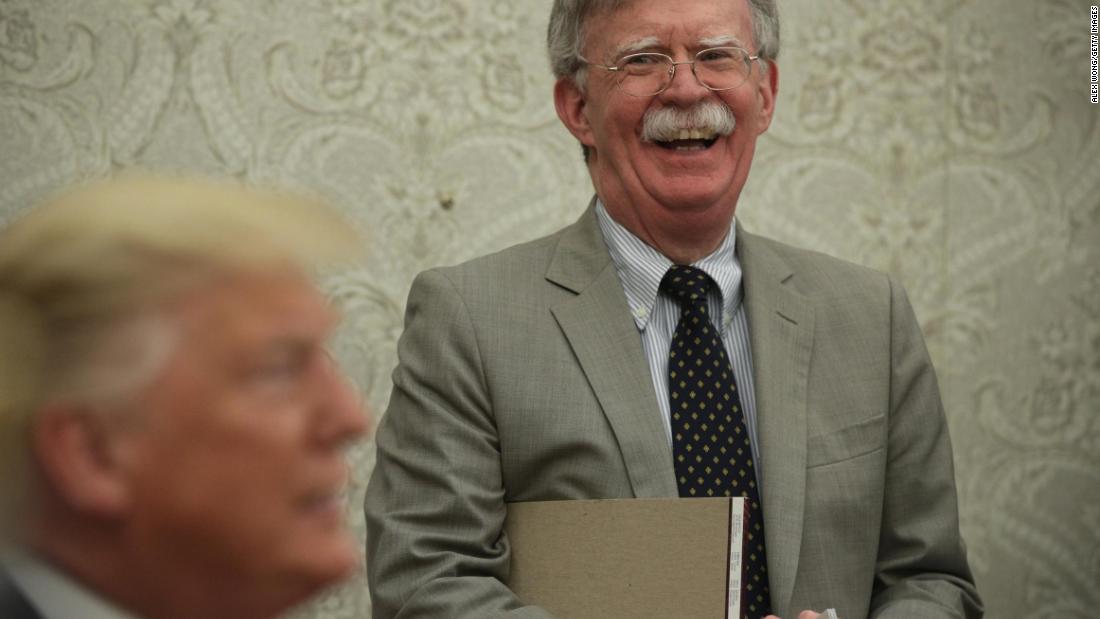 The White House has issued a formal threat to former national security adviser John Bolton to keep him from publishing his book, "The Room Where It Happened: A White House Memoir," sources familiar with the matter tell CNN.

The White House has issued a formal threat to former national security adviser John Bolton to keep him from publishing his book, “The Room Where It Happened: A White House Memoir,” sources familiar with the matter tell CNN.

The White House had no comment. Neither Bolton nor a spokesman for the publisher, Simon & Schuster, responded to a request for comment.

The letter comes in the midst of President Donald Trump attacking Bolton on Twitter, and Bolton’s lawyer accusing the White House of corrupting the vetting process for Bolton’s book by sharing the contents of the book with those outside the National Security Council’s Records Management Division.

An image of the Grim Reaper comes to mind…just sayin’ 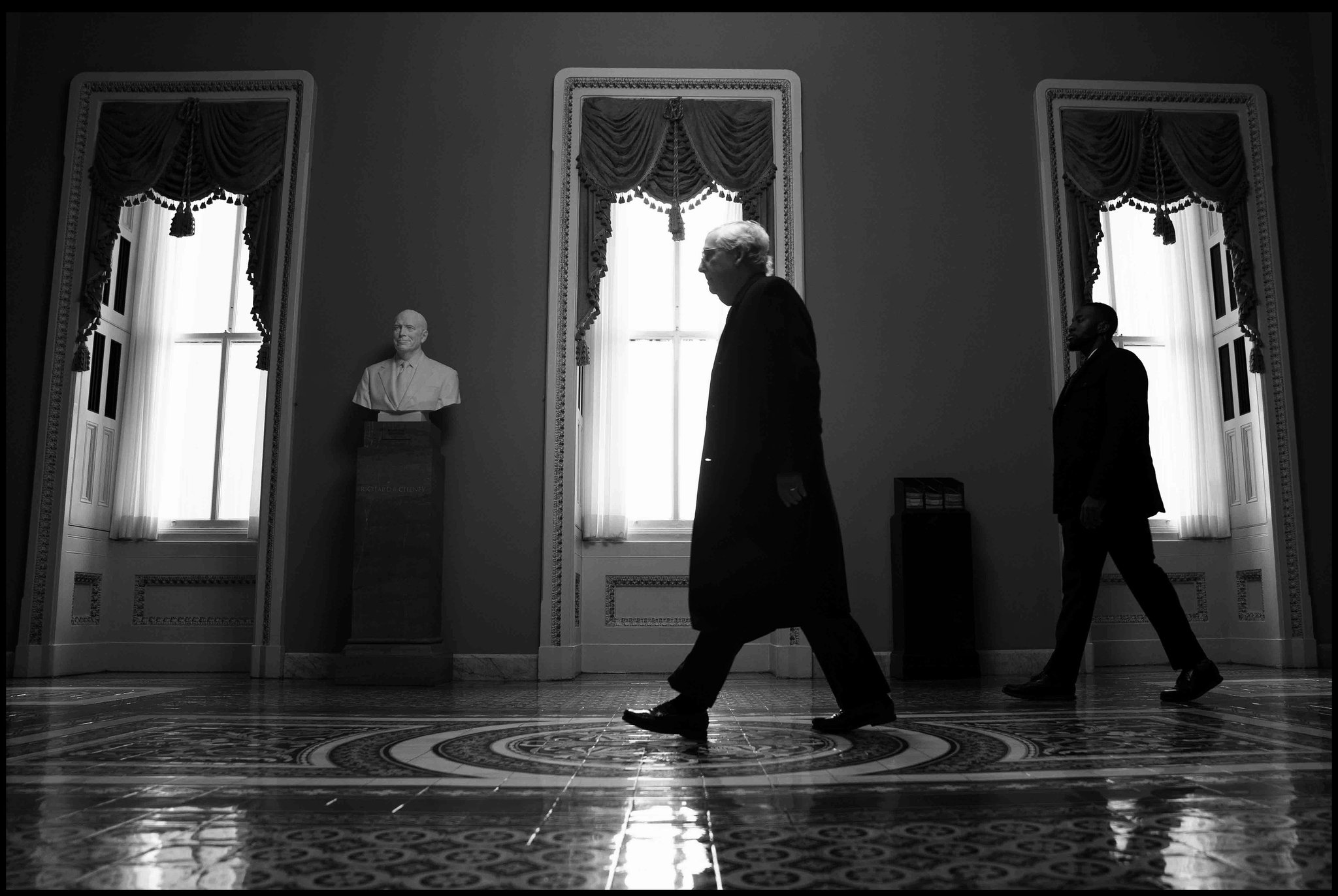 And now this threat is may be considered in the Simon Schuster campaign ad.

CNN is reporting the White House threatening Bolton to keep him from publishing his book. Can see the Simon & Schuster advertising campaign now: THE BOOK THE WHITE HOUSE DOESN'T WANT YOU TO READ!
Windthin (David Bythewood) 2020-01-29 17:17:15 UTC #2275

Beat me to it. Exactly what you do when you’re entirely unafraid of the contents of a book, right? This regime is so transparently dumb. 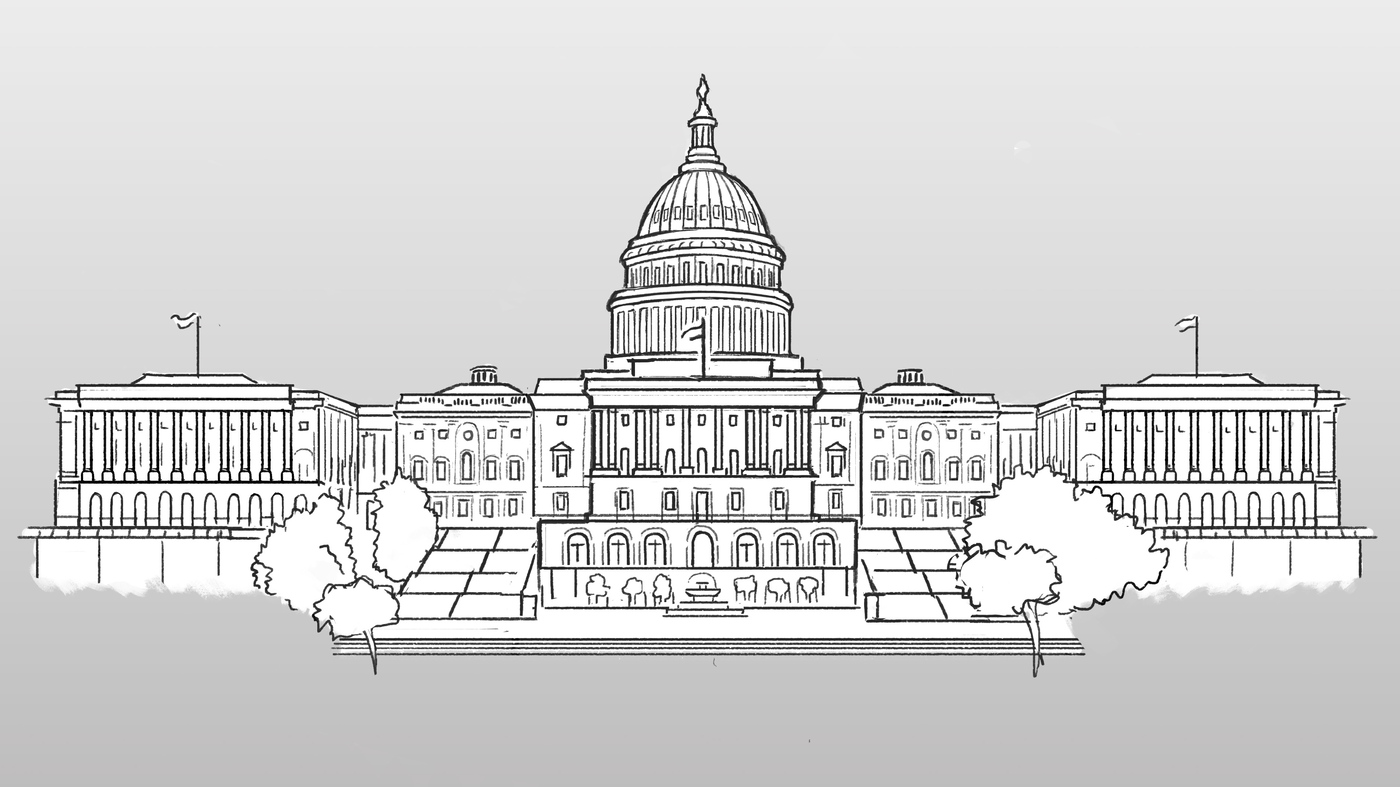 NPR is hosting live special coverage of the trial. On Tuesday, the defense team is wrapping up opening arguments on the Senate floor. 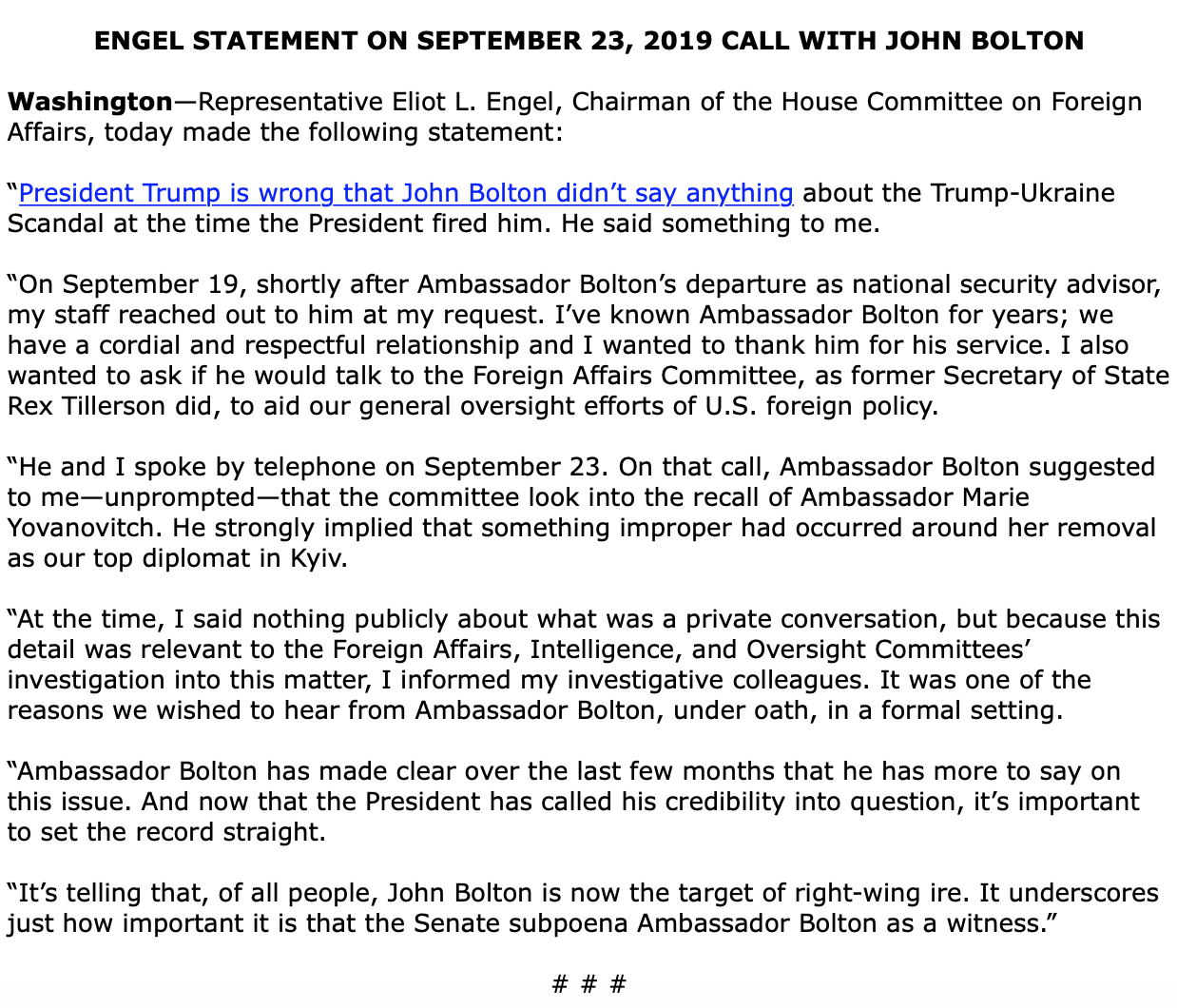 BREAKING: House Foreign Affairs Chairman Eliot Engel says Bolton told him on a Sept. 23 call that “the committee look into the recall of Ambassador Marie Yovanovitch and strongly implied that something improper had occurred around her removal as our top diplomat in Kyiv.”

“President Trump is wrong that John Bolton didn’t say anything about the Trump-Ukraine Scandal at the time the President fired him. He said something to me.

“On September 19, shortly after Ambassador Bolton’s departure as national security advisor, my staff reached out to him at my request. I’ve known Ambassador Bolton for years; we have a cordial and respectful relationship and I wanted to thank him for his service. I also wanted to ask if he would talk to the Foreign Affairs Committee, as former Secretary of State Rex Tillerson did, to aid our general oversight efforts of U.S. foreign policy.

“He and I spoke by telephone on September 23. On that call, Ambassador Bolton suggested to me—unprompted—that the committee look into the recall of Ambassador Marie Yovanovitch. He strongly implied that something improper had occurred around her removal as our top diplomat in Kyiv.

“At the time, I said nothing publicly about what was a private conversation, but because this detail was relevant to the Foreign Affairs, Intelligence, and Oversight Committees’ investigation into this matter, I informed my investigative colleagues. It was one of the reasons we wished to hear from Ambassador Bolton, under oath, in a formal setting.

“Ambassador Bolton has made clear over the last few months that he has more to say on this issue. And now that the President has called his credibility into question, it’s important to set the record straight.

“It’s telling that, of all people, John Bolton is now the target of right-wing ire. It underscores just how important it is that the Senate subpoena Ambassador Bolton as a witness.”

GOP members emerge from lunch with Sen. McConnell prior to the Q & A portion of the Impeachment trial and only offer that the Witness quesiton was not discussed. This would fall into the notion that McConnell has always had the NO vote on Witnesses.

GOP senators believe they have the votes to block witnesses

It was clear to Senate Republicans on Wednesday after a morning meeting between Senate Majority Leader Mitch McConnell (R-Ky.) and Sen.

It was clear to Senate Republicans on Wednesday after a morning meeting between Senate Majority Leader Mitch McConnell (R-Ky.) and Sen. Lisa Murkowski (R-Alaska) that the question of having additional witnesses is settled, and the Senate will vote Friday to wrap up the impeachment trial of President Trump.

There was no discussion of witnesses at a Senate GOP lunch meeting Wednesday, which was held a couple hours after McConnell and Murkowski met for about 20 to 30 minutes.

That was seen as a sign by several senators that Democrats will fail to convince four Republicans to join them in calling for witnesses. Without a vote to hear from witnesses, the trial could end as soon as Friday.

Sen. Mike Braun (R-Ind.), emerging from the lunch, said, “I think I can say the mood is good.”

Braun expressed confidence that McConnell will be able to keep his conference unified enough to defeat a motion to consider subpoenas for additional witnesses and documents.

“We’ll be in a place where I think everyone is going to have their mind made up and I believe that we’ll be able to move to a verdict, and the witness question will be clear at that point,” Braun added.

Murkowski did not attend the lunch.

Sen. Mitt Romney (R-Utah), who has been the most outspoken advocate for calling additional witnesses, declined to comment as he left the lunch.

Romney and Sen. Susan Collins (R-Maine) are both expected to back witnesses. Murkowski has been seen as a third possible vote, though she had not announced any decision.

Instead of discussing the possibility of having former national security adviser John Bolton appear as a witness in the trial at Wednesday’s meeting, lawmakers talked about voting Friday to move quickly to an up-or-down vote on two articles of impeachment.

“There was no discussion about that today,” Rounds said.

Instead, Rounds said the discussion was about how “we’re moving forward.”

A report by The New York Times that said Bolton in his forthcoming book writes that Trump had linked the withholding of aid to Ukraine to that country conducting investigations of former Vice President Joe Biden and his son Hunter Biden had given new energy to the witness debate.

Democrats have been clamoring to hear Bolton as a witness at the trial.

Hard to know what to believe here. Some source said he didn’t have the votes, now the Hill says they do. They have to know that if they do this it will be an utter disaster come November, and yet they’re poised to do it.

After threatening John Bolton over his book, the White House now claims it contains top secret information so dire they immediately waited a full month before banning it.

Just so we’re all clear here, Bolton is untrustworthy and his book that we’re not allowed to read is full of lies that are top secret and classified despite being totally false and irrelevant because Trump didn’t do anything wrong.

White House: Really? Top secret? NSC has had the manuscript for a month but now that it has leaked Trump says this bs?? So transparently scared out of his mind. https://t.co/hsZOnd7ozv

Hard to know what to believe here

Had been listening to a bunch of pundits over the last 12 hours, and they all suggest that McConnell could be playing possum here. He stated he didn’t have the votes, just to throw the Dems off…but he really does.

Friday we will know.

I don’t understand what such a move gets him. If true, such games will only further anger a public who is NOT tuning out and ignoring this the way the GOP wishes they would. It’s a bad move.

If true, such games will only further anger a public who is NOT tuning out

I can only think that McConnell has proven he is dastardly…makes a beeline for all roads to maintaining power. This little ‘head fake,’ if true just keeps his party in power, and green lights all the future judges, tax cuts, ACA destruction that the core constituents - KOCH Bros, and all the far right interests, that maintain their power.

Yes, it will never pass the smell test…for most thinking Americans.

None of those had the levels of engagement or public awareness, sadly, as this. I think he is seriously underestimating what this will do to them in the long run on the gamble they can somehow play catch up before November.

Proposed Q’s from Sen Romney which try to get at T’s arguments about being more concerned about corruption, what Giuliani’s role had been etc. Shows that he gives a damn about finding out what is truthful in this case

What happened today? Trump’s impeachment trial moved to written questions. Senate Republicans opened the day with Sens. Susan Collins, Lisa Murkowski, and Mitt Romney – three Republicans who have hinted they could vote to hear from witnesses – asking Trump’s legal team how they should consider abuse of power if Trump had “had more than one motive for his alleged conduct.” Trump attorney Patrick Philbin argued that if there were a motive “of the public interest, but also some personal interest,” …

What’s that? The NSA has more info on the Russian disinformation campaign against Ukraine and the Trump regime is blocking them from providing it to congress?

Surprising answer to Senator Warner's request for additional information about Russia disseminating the same Ukraine conspiracy theories promulgated by President Trump and Rudy Giuliani (and, I'd note, now the president's counsel and some Republican Senators).

Schiff responds that, yes, there's information about that in Jennifer Williams's classified supplement to her testimony, and all Senators should look at that. But then...

he also says there is a "second body of evidence" on that issue "that is relevant to this trial that you should also read. We should figure out the mechanism that would permit you to do so, because it is directly relevant to the issues that we have been discussing." What's that?

He then said that the NSA has relevant information (on Ukraine) that they have been directed not to provide to Congress. NSA information about Ukraine that is being withheld from Congress "at the urging of the administration." Tell us more, please.
Pet_Proletariat 2020-01-30 01:46:34 UTC #2289

Summary of the Impeachment Inquiry into Trump

Alan Dershowitz, one of President Trump's defense lawyers, argued that anything a president does to get re-elected could be considered in the nation's interest and is therefore not impeachable. https://t.co/ptlmibuTni
Pet_Proletariat 2020-01-30 02:12:28 UTC #2291

But that argument would make him King and as I recall objecting to a King was the basis for the founding of the United States of America.