64 US troops now being treated for Traumatic Brain Injury as toll of Iranian...

So far, all of troops have been diagnosed with mild Traumatic Brain Injury, but that could change because brain injury symptoms develop over time, said Army Gen. Mark Milley, chairman of the Joint Chiefs of Staff.

Republicans prove they refuse to defy Trump under almost any circumstance

More significantly, decades of American political realignment have tightened the bonds holding Republicans together in any high-stakes fight with Democrats. The ongoing diversification of American society further unites an overwhelmingly white GOP around a shared fear of impending doom.

Together, those changes lend weight and rigidity to Republican partisanship that did not exist that last time a GOP chief executive faced impeachment. The modest barrier that once separated Republicans from Democrats has become a dense, multi-layered wall reinforced by ideology, race, education and religion as well as party identification.

That helps explain why so many Republican senators have cast aside consistency, logic and unrebutted evidence to shield their president from impeachment charges. Senate Majority Leader Mitch McConnell aims for a Friday Senate vote in which Republicans would refuse even to hear new testimony about Trump’s culpability before summarily acquitting him.

In the Senate, no Republican has called for the President’s resignation or signaled intent to vote for his conviction. Democrats need support from four of 53 Republicans just to subpoena Bolton’s testimony, which reportedly promises to affirm the Democratic allegations. The combined efforts of McConnell and the White House may block even that.

The decisive vote on Bolton’s testimony may lie with retiring Republican Sen. Lamar Alexander of Tennessee, once an aide in Nixon’s White House. His own political emergence a few years after Nixon resigned lends poignancy to his choice against hearing witnesses, which he announced late Thursday night.

Below is the letter Stephanie Schuman @LeafLegal and I sent to Senator McConnell earlier today, (202) 224-2541, summarizing the testimony Lev Parnas would be able to provide, were he called as a witness. #LetLevSpeak #AmericansDemandWitnesses #CallTheWitnesses #LetBoltonTestify
dragonfly9 2020-01-31 20:46:45 UTC #2356

Hyper-partisan polarization short circuits our system. Founders anticipated a lot: including foreign interference & figures like Trump. But they thought Congress would be a self-interested protector of its own power - & the Senate would put ultimately put country over party.
dragonfly9 2020-01-31 20:51:50 UTC #2357

WTF WTF WTF is Jay Sekulow talking about…Yes, there’s a lot of evidence out there, and there were a lot of interviews. 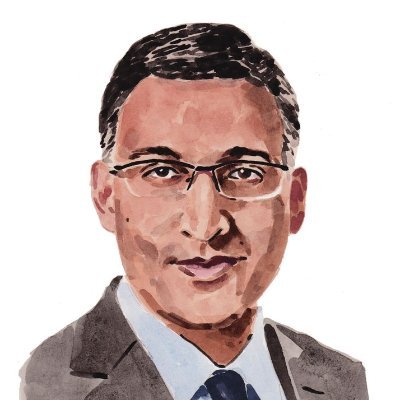 Sekulow giving the weirdest argument against witnesses ever. He's saying he didn't get to cross examine Sondland&other witnesses in House, and if they are called in the Senate, he'd cross-x them That's the whole point! If you had an innocent client, that's what you'd want to do.

These process arguments are dumb. Sekulow is complaining Trump’s lawyers didn’t get to go into grand jury & cross ex witnesses, which of course, isn’t how this works. Defendants get to cross examine witnesses at trial, which only happens if they’re called.

Sekulow - “We will need to do the work (get witnesses) that they failed to do.”

Defendants get to cross examine witnesses at trial

My npr feed cut out and when it came back I thought for moment this argument was being made by a House Manager.

It’s such a bad faith argument.

He complains endlessly about due process but yet refusing exercise said due process, here in the trial.

This is due process! This is the trial!

I made this just for you: 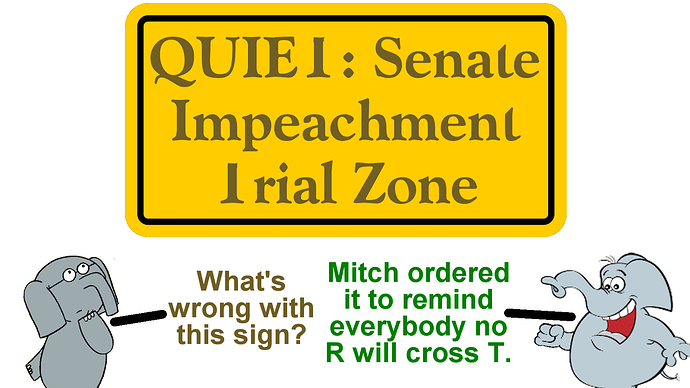 Not sure what is going on 5:04p EST, while Senators/McConnell are standing around pre-vote…

Here’s something from CNN

CNN discussion is explaining what’s going on in the Senate: Due to a mistake in drafting the rules, Senator Schumer now has ability to submit amendments—one implication is it can force GOP to make uncomfortable votes. Gives Schumer leverage he otherwise hasn’t had in the process
Windthin (David Bythewood) 2020-01-31 21:57:38 UTC #2362

They rigged the trial and they still screwed THAT up? Wow.

The delay has to do with a deliberation between the WH and McConnell’s getting this deliberation over with. McConnell wants to delay until early next week. WH wants it done by the weekend.

The witness vote is happening NOW.

It is a dark day for us all.

Claire McCaskill said the delay was that the GOP was texting the White House for what to do.

The criminal is conducting his own trial.

Does anybody know how many of the impeachment hearing witnesses were GOP-called? I am thinking four or five.

Monday is closing arguments, Wednesday final vote. Trump doesn’t get his way on the timeline. 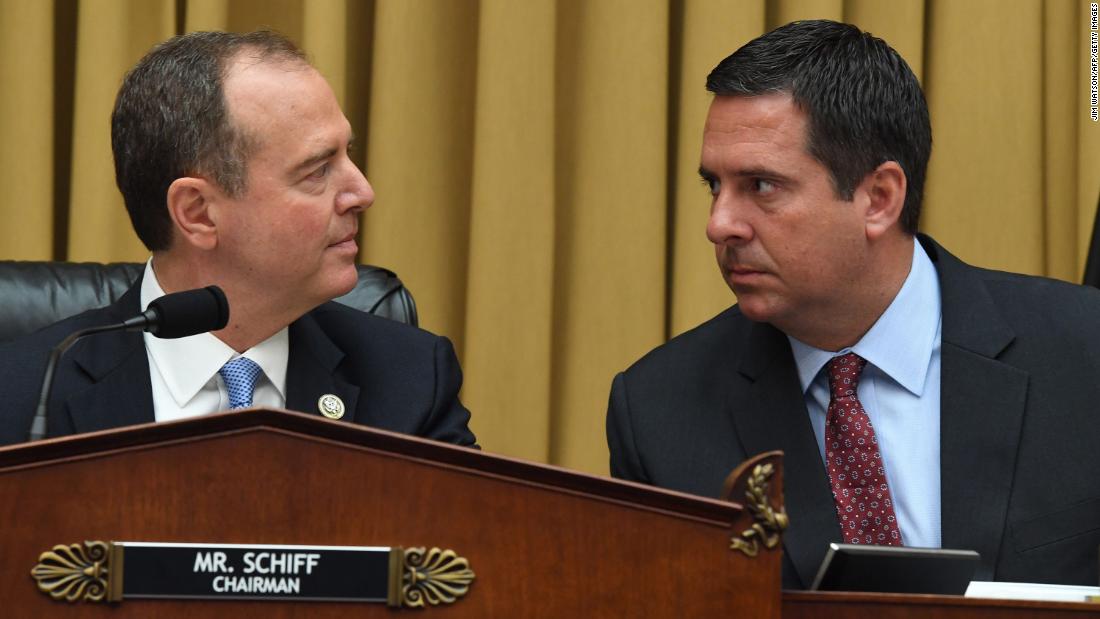 House Republicans submitted a list of witnesses they'd like to testify as part of the chamber's impeachment inquiry into President Donald Trump and Ukraine.

We have battling propaganda here.

The Daily Mail claims he quit: 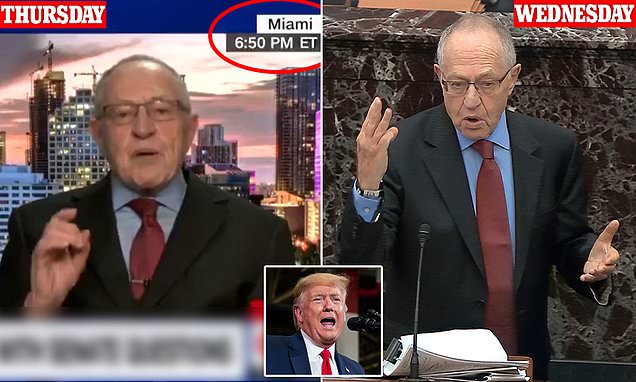 The former Jeffrey Epstein attorney turned up in Miami amid a firestorm over his legal theory that if the president believed his re-election was in the public interest, anything he does is permitted.


Conservative site Newsmax claims he did not:

Attorney Alan Dershowitz, who gave the opening statement for President Donald Trump's impeachment defense in his trial, told Newsmax TV on Friday that he has not quit the team or been fired despite returning to Miami. "That report is about as...

The one grain of truth from both? He was not there today and he did go back to Miami. I am guessing either the laughingstock he became or the insane arguments he made got him a one-way ride out of dodge, but honestly there’s no knowing, and neither of these outlets is trustworthy.

Though the vote will be Wednesday, this is not over. Schumer, as suggested, is putting forth amendments now to force the GOP to vote them down. The Democrats are showing who the GOP is still.

They’re on resolution three now, all put forth by Democrats. So far all have been voted down.

The GOP doesn’t like Romney any longer. But they’re fine with Collins. Because Collins’ votes with the Dems were all approved in a desperate effort to give her cover in the upcoming election. 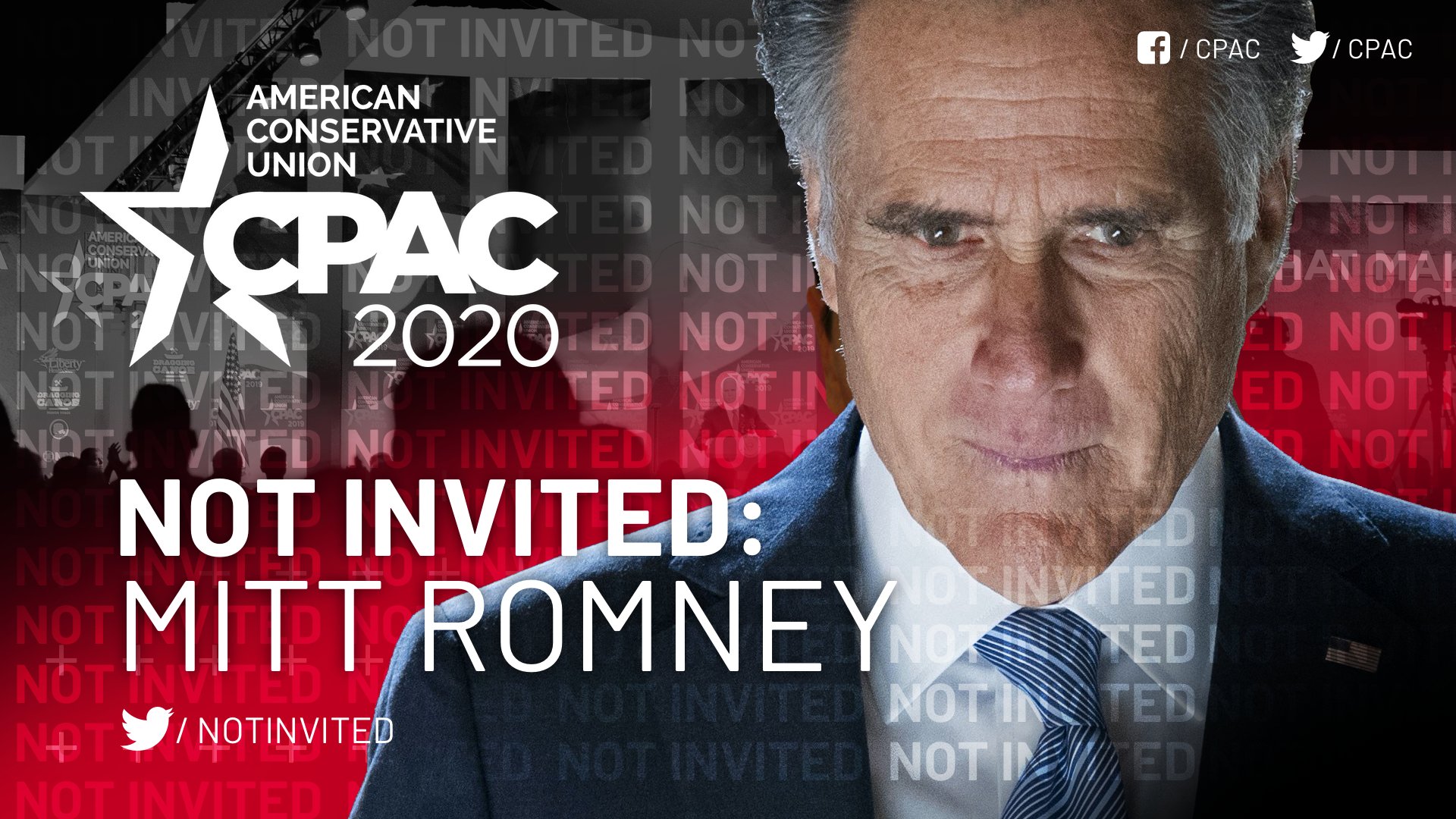 BREAKING: The "extreme conservative" and Junior Senator from the great state of Utah, @SenatorRomney is formally NOT invited to #CPAC2020.
← previous page next page →