The White House has admitted that Trump’s photo op was staged so that Trump could be seen outside, to push back against reports of him hiding in his bunker.

The police had unexpectedly fired tear gas and smoke bombs at the demonstrators without warning.

How Trump cleared the park around the White House 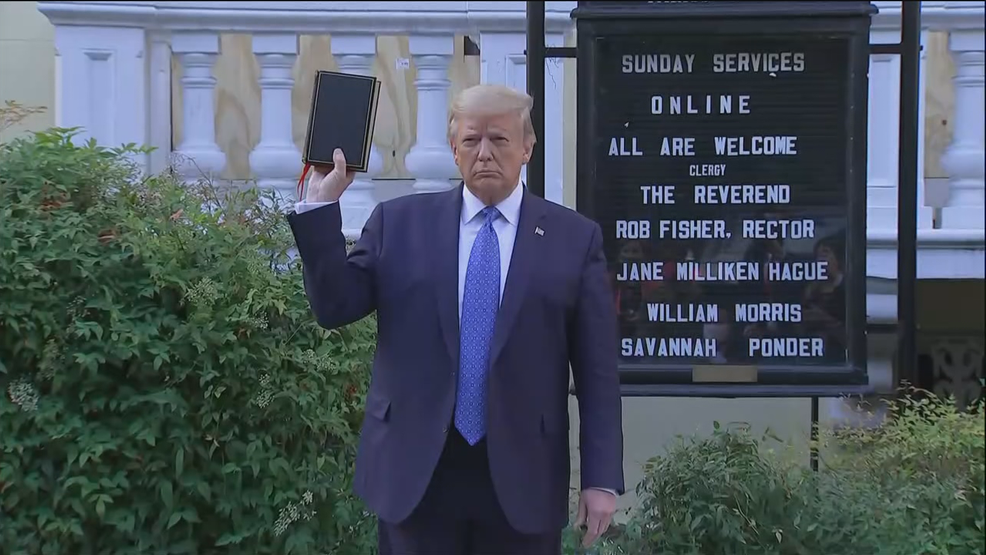 President Donald Trump raised some eyebrows as he decided to take a walk from the White House to St. John's Church in the midst of loud protests taking place nearby. A portion of the historic church was set on fire Sunday evening as protests...

Bishop Mariann Edgar Budde of the Episcopal Diocese of Washington was outraged by the staged Trump photo-op: ‘I just can’t believe what my eyes have seen’ 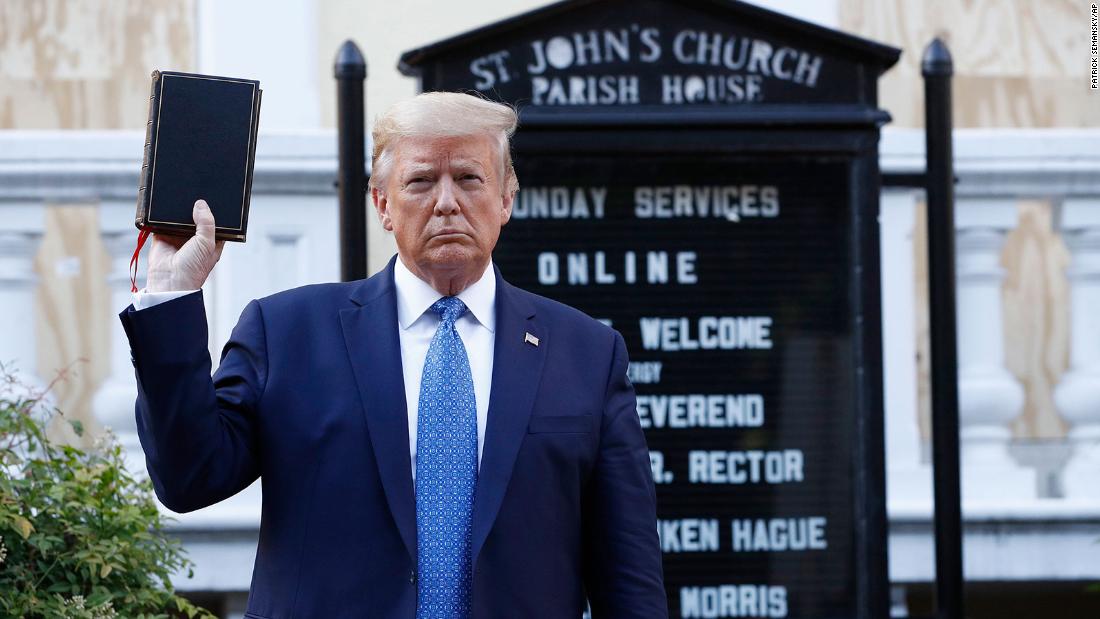 Bishop of DC church outraged by Trump visit: 'I just can't believe what my eyes...

Bishop Mariann Edgar Budde of the Episcopal Diocese of Washington said Monday evening that she is "outraged" after President Donald Trump visited her church without advance notice to share "a message antithetical to the teachings of Jesus."

A Beloved BBQ Chef Who Fed Police For Free Was Fatally Shot After Louisville...

David McAtee was a popular barbecue chef in the community who often used to feed police officers for free.

A man was shot and killed in Louisville, Kentucky, after police said officers and the Kentucky National Guard “returned fire” on a group of people gathered outside a restaurant early Monday morning.

Kentucky Gov. Andy Beshear said in a statement Monday that the Louisville Metro Police Department (LMPD) and the Kentucky National Guard “were fired upon” while working to disperse a crowd as part of a citywide curfew.

They “returned fire,” which resulted in a man’s death, Beshear said, adding that he has authorized the Kentucky State Police to independently investigate the shooting.

Authorities later said that they “do not know” who shot the man and if it was related to a “separate incident,” or if he was killed due to shots fired by either Louisville officers or National Guard members.

Louisville Mayor Greg Fischer announced Monday that he had fired Louisville Metro Police Chief Steve Conrad after learning that the body cameras of the officers who had fired their weapons were not active at the time of the shooting.

Video in tweet confirming Trump photo-op was staged to push back against the bunker story.
https://twitter.com/existentialfish/status/1267612075536326656?s=20 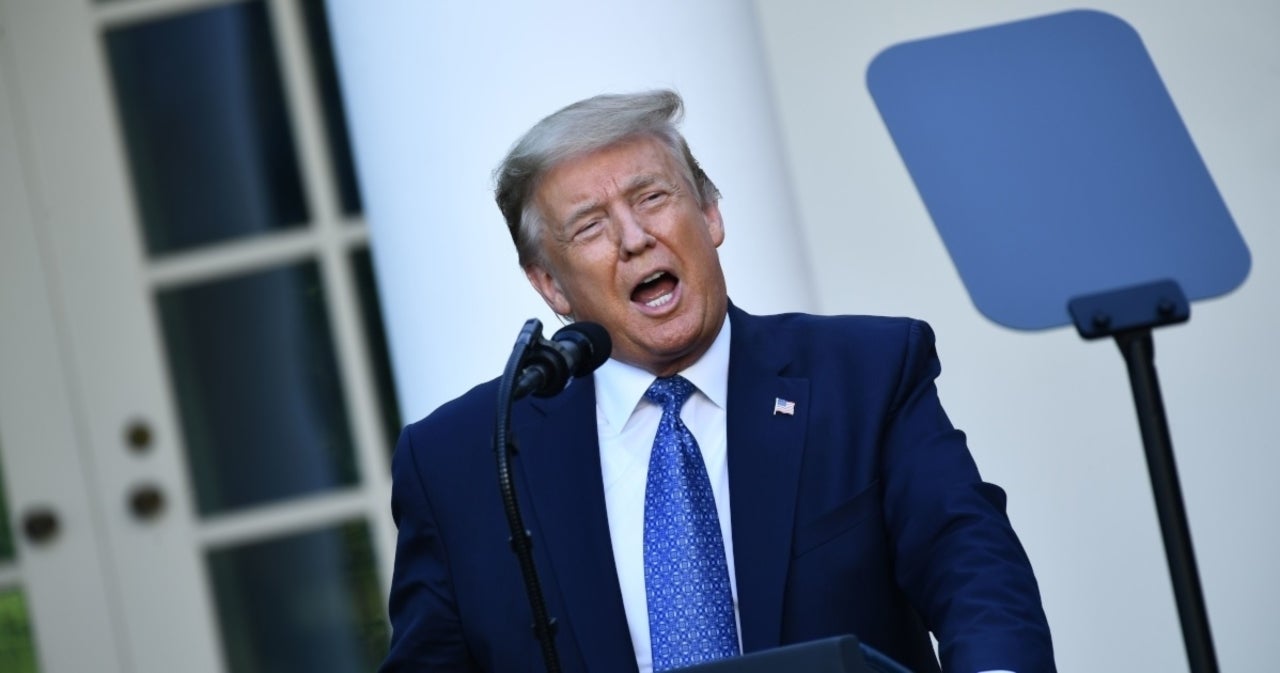 UNDER OBAMA: Bin Laden is Dead, GM is Alive.
UNDER TRUMP: Americans are dead, Coronavirus is Alive.

I have started a twitter thread collecting videos documenting racism and police brutality, particularly relating to these protests: 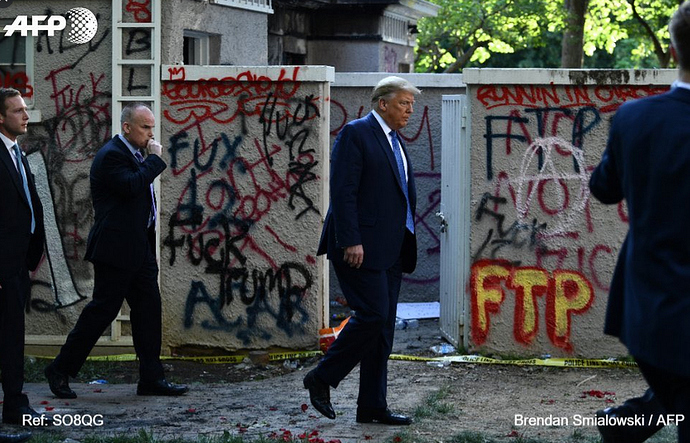 ONE mask. Despite the outbreak in the West Wing. Wow. 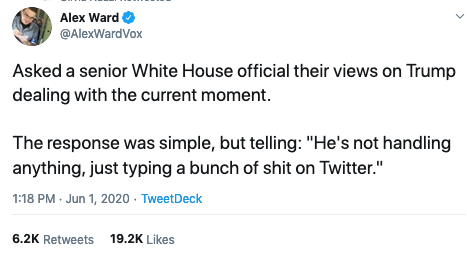 That about covers it… 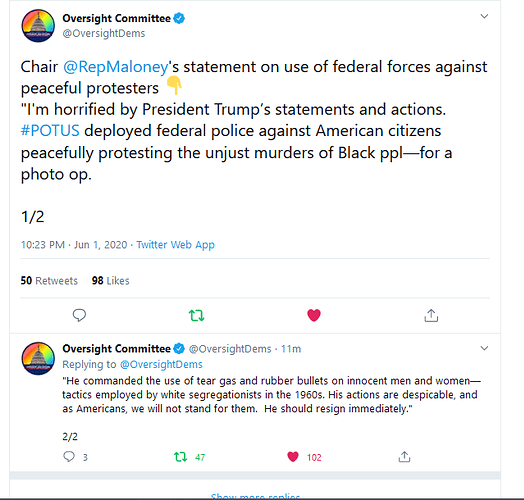 The fake accounts trying to hide as Antifa but are actually linked to white nationalist accounts are being deleted by Twitter. Suspected and confirmed in some instances. Other misinformation and misleading claims spread across Twitter on Sunday night and into Monday related to the protests.

A Twitter account claiming to belong to a national “antifa” organization and pushing violent rhetoric related to ongoing protests has been linked to the white nationalist group Identity Evropa, according to a Twitter spokesperson.

As protests were taking place in multiple states across the U.S. Sunday night, the newly created account, @ANTIFA_US, tweeted, “Tonight’s the night, Comrades,” with a brown raised fist emoji and “Tonight we say ‘F— The City’ and we move into the residential areas… the white hoods… and we take what’s ours …”

This isn’t the first time Twitter has taken action against fake accounts engaged in hateful conduct linked to Identity Evropa, according to the spokesperson.

The antifa movement — a network of loosely organized radical groups who use direct action to fight the far-right and fascism — has been targeted by President Donald Trump as the force behind some of the violence and property destruction seen at some protests, though little evidence has been provided for such claims.

Other misinformation and misleading claims spread across Twitter on Sunday night and into Monday related to the protests.

Two hashtags that trended worldwide on Twitter falsely claimed that there was a “cover-up” or a “blackout” of protests in Washington, D.C., overnight. Both appeared to insinuate that protesters have been silenced in some way, perhaps by a secret internet blackout.

Twitter says it has removed the trend from its “trending topics” section because of "coordinated attempts to disrupt the public conversation" around the protests.

Twitter said it suspended several hundred accounts and is investigating the viral spread of the hashtag, which it said was boosted by "hundreds of spammy accounts."

“We’re taking action proactively on any coordinated attempts to disrupt the public conversation around this issue,” a Twitter spokesperson said.

The spokesperson said the company sometimes pulls down hashtags that violate the company’s rules, like platform manipulation.

NetBlocks, a nonprofit group monitoring worldwide internet access, found no indication of a mass-scale internet disruption in the Washington area overnight or in the last 48 hours.

Journalists covering the protests also took to Twitter to disprove the hoax.

“A lot of people are asking me about a possible #dcblackout. I’ve been out near the White House since 4 am and haven’t experienced any outage,” tweeted Victoria Sanchez, a reporter for WJLA, the local ABC affiliate, adding that her colleagues had posted multiple updates throughout the night.

Many accounts tweeting the message had few to no followers. The same messages were also posted on Reddit and 4chan late Sunday. The posts pushing the #DCBlackout hashtag peaked in popularity around 12:30 a.m. ET Monday.

You wonder who they are seeking?..Antifa ‘actors’ or white supremacists…inciting violence. 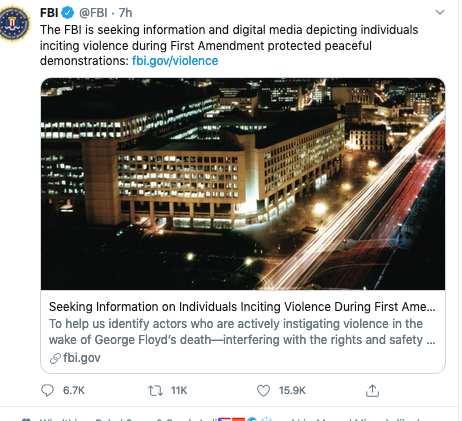 The FBI respects the rights of individuals to peacefully exercise their First Amendment rights. Our mission of protecting the American people and upholding the Constitution is dual and simultaneous, not contradictory.

Accordingly, we are committed to apprehending and charging violent instigators who are exploiting legitimate, peaceful protests and engaging in violations of federal law. The continued violence, potential threat to life, and destruction of property across the United States interferes with the rights and safety of First Amendment-protected peaceful demonstrators, as well as all other citizens.

To help us identify actors who are actively instigating violence in the wake of Mr. George Floyd’s death, the FBI is accepting tips and digital media depicting violent encounters surrounding the civil unrest that is happening throughout the country.

If you witness or have witnessed unlawful violent actions, we urge you to submit any information, photos, or videos that could be relevant to the case at fbi.gov/violence. 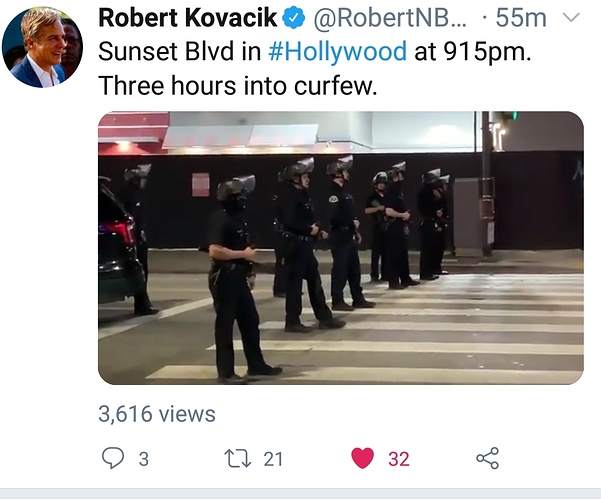 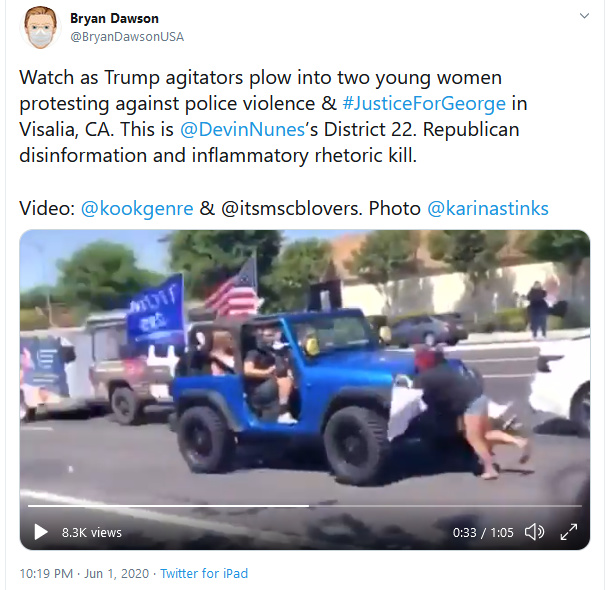 THREAD: photos of peaceful protests in smaller towns (mainly white) all across America. 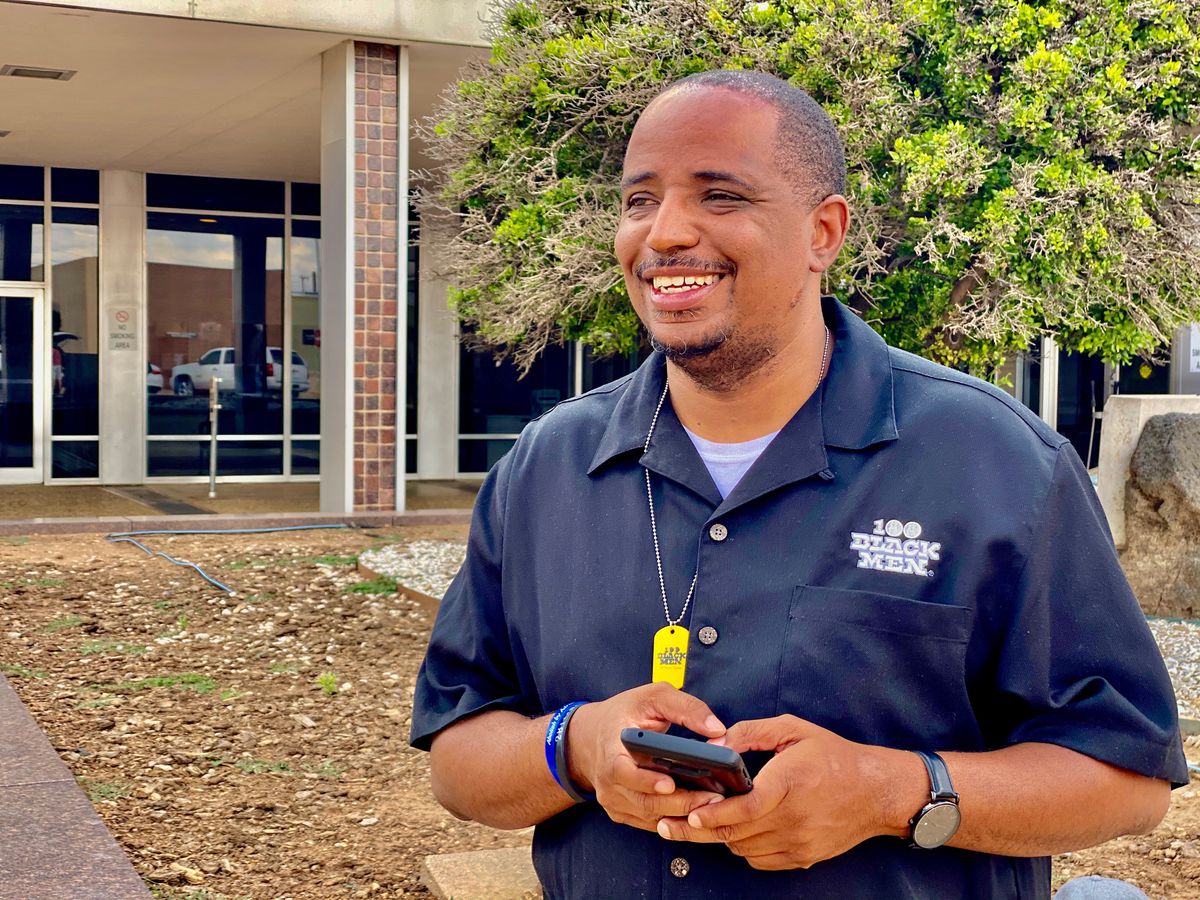 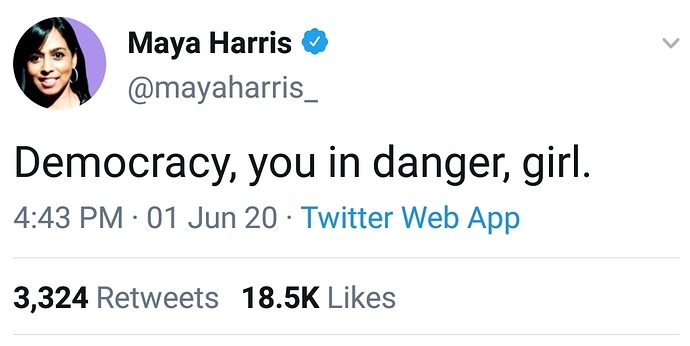 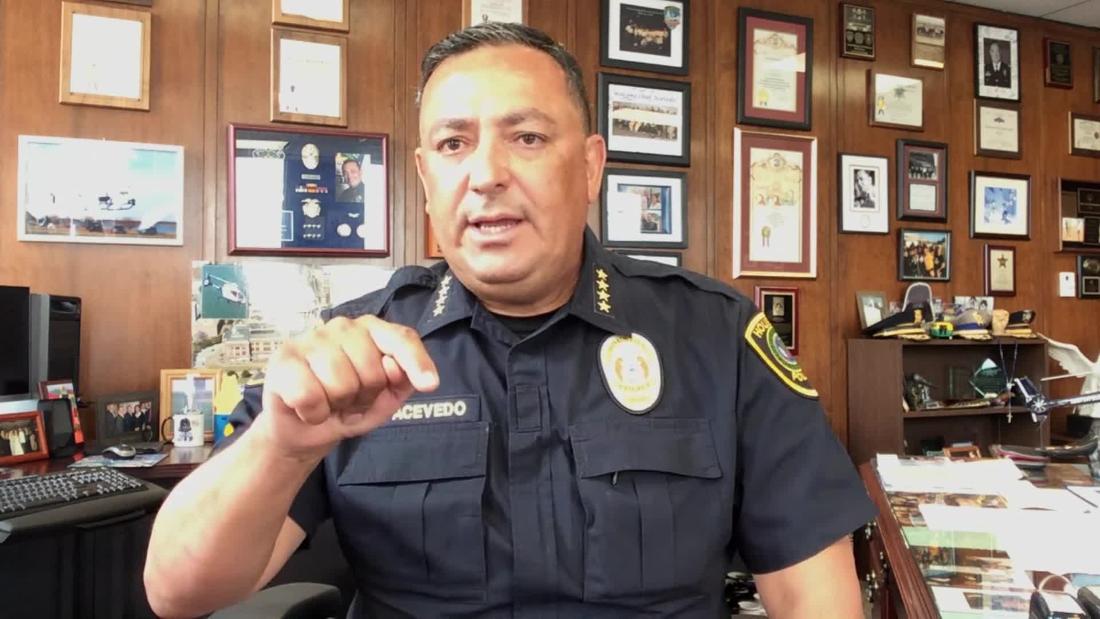 Christiane speaks with Houston Police Chief Art Acevedo about why there is "no excusing" the killing of George Floyd and his vow to march with the Floyd family for justice.

this is a great and actually uplifting interview with Christiane Amanpoor and the Houston police chief. 10 mins, he has good things to say. 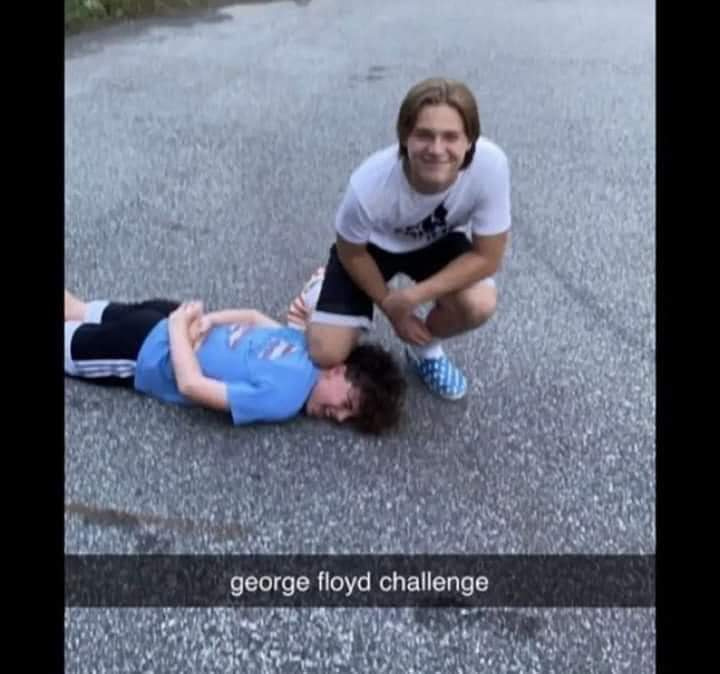 It turns out Trump didn’t just have protesters attacked and chased off with tear gas and rubber bullets – PRIESTS and others working outside St. John’s were also forcibly expelled from the church! 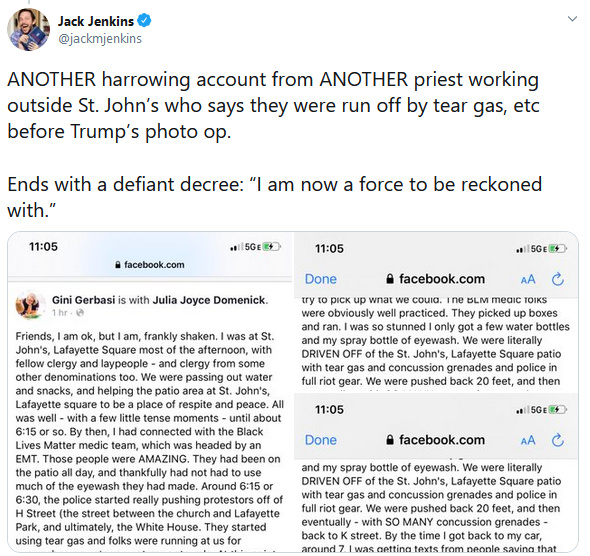 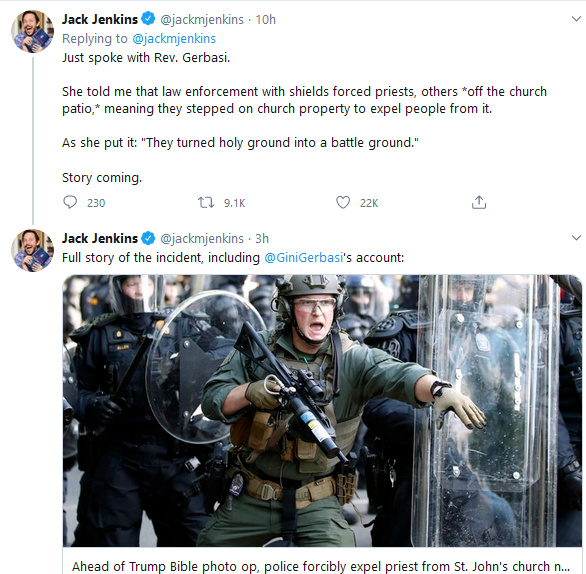 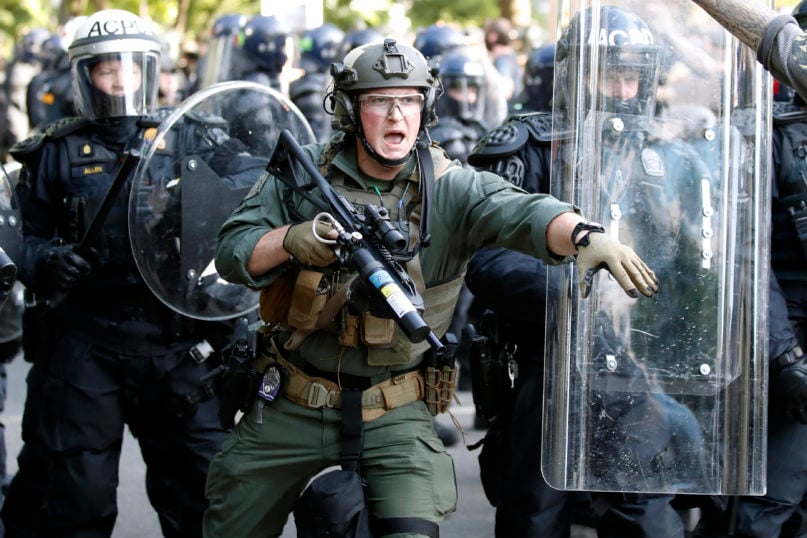 An Episcopal priest tells RNS she was driven from church grounds ahead of Trump's staged photo with a Bible.

A homeowner in D.C. offering sanctuary to those attacked by police is under siege by police:

Thread: roughly 40 protesters were invited into a home, putting them in compliance with D.C. curfews. Police threatened the home owner anyhow, claiming COVID-19 as an excuse, and then teargassed A PRIVATE RESIDENCE.

More evidence of a police force armed for ‘war’ among he civilian population is another example of weaponizing local authority - fascist and authoritarian move.

We have been seeing from so many sectors of the police force…the mindset of a warrior.

Reading through some recaps (Heather Cox Richardson - 6.1.20) and she mentions this -

Esquire writer Charles Pierce notes that since 9-11, the federal government has equipped local police with $4.3 billion in military gear and prepared them for an all-out war on terrorists. In 2014, President Barack Obama tried to stop the transfer of military weapons and equipment to civilian police departments with an executive order, but Trump reversed it. This militarization of the police has created in America’s streets what a government commission in 1968 defined as a “police riot,” in which officers themselves instigate, escalate, or sustain violent confrontations. In addition to attacking protesters, today’s police are singling out journalists for attack. This development is significant because it is a key sign of authoritarian regimes, which try to silence journalists to silence information about their actions.

All Weekend, All Over the Country, We Saw a Police Riot

Everything is in midair and could go in any direction.

Over the weekend, so many chickens came home to so many roosts that, by and large, it was hard to differentiate one from the others. But one stood out among the rest. For decades, we have heard the warnings about turning civilian police departments into quasi-military shock troops. For decades, courtesy of a misguided Pentagon policy, we have watched cops in even the smallest towns outfit themselves as though just beyond the Piggly Wiggly lay Normandy or Fallujah. Police training, where it existed at all, lagged hopelessly behind the armaments. Some $4.3 billion in military equipment was handed over, gratis, to local police departments. You can’t have this equipment and not use it, and you have to have a certain mentality to use that equipment the way it was meant to be used—to wit: to protect yourself and to kill enemies, somewhere out there beyond the gunports. The vehicles are armored, and the vision of the people driving them narrows. They live in frightening psychological isolation with the crosshairs in their eyes.

In the wake of the Ferguson uprising in 2014, Barack Obama issued an executive order that attempted to restrain the transfer of military weapons and equipment to civilian police departments. This policy was reversed by the current administration* because the president*’s underthings have been in a knot since Obama helped him look stupid once in a banquet hall. But the crisis that rode into town in a surplus MRAP reached beyond the paranoid frontiers of the landfill that is the president*’s mind. The military mind follows the military weaponry but, in this case, it’s unaccompanied by military training and military discipline. In this, we end up with myrmidons—modern myrmidons of a dangerous hive mind. 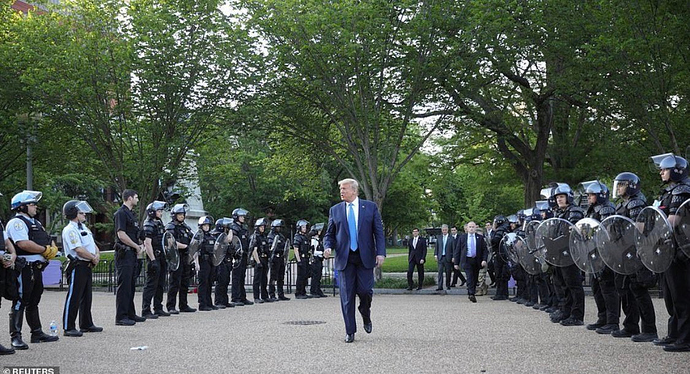