(question in subject is rhetorical of course) But, I had a bit of a back/forth with a journalist on twitter today and I wanted to put it out there for debate/discussion here to get people’s feedback. The conversation started over the debate of someone pointing out the lack of policy coverage and a journalist came back with proof that there are many stories with “A1/prominent placement” that covered policy. This was the discussion (edited a little bit for flow and the ability to have more than 140 characters).

What’s the A1 story equivalent for web/mobile? I haven’t seen a printed NYT or WaPo in…years. Whatever the first push notification is for day? If their isn’t a A1 equivalent & 85% of ppl get their news via mobile, why does content of A1 stories matter? I asked these questions more so to provoke the thought process.

(argument is made that homepage placement matters and places the argument that it’s up to the publishers)
65% ppl prefer mobile over web for getting their news - so homepage placement is rarely relevant (TBH, the ads suck on the web, that’s probably why). 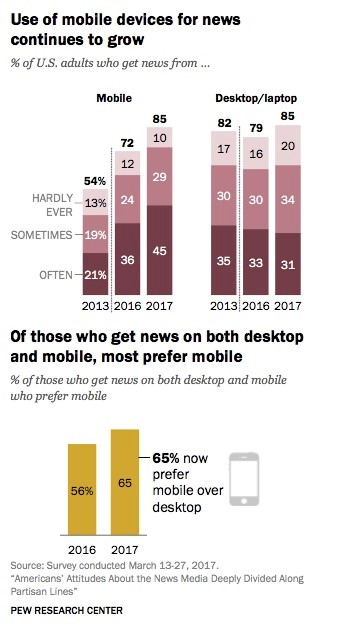 (argument is made that “many, many” people still get their news via print and “see” cover page print copies – even if they don’t consume)
Only 2 in 10 people (as of early 2016) get their news from print. 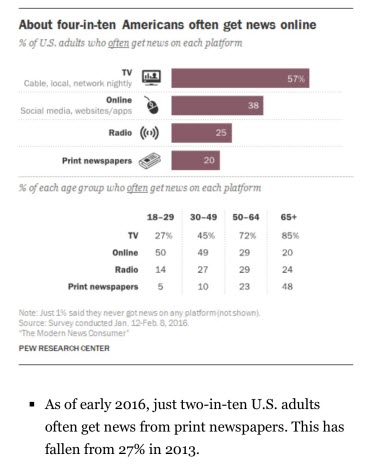 Many people don’t see the covers - maybe in NY bc of newsstands. (Unless it’s mentioned on Twitter.) The most I’ve seen is NYT at Starbucks, where the stack sat largely untouched (many times) in both LA & Philadelphia. Near me, they only sell local papers (if they do at all) and those are widely untouched.

As a avid news reader who goes out of my way to be informed and NYT & WaPo digital subscriber - I couldn’t tell you on any day (or ever) what the A1 story was, how should we expect an average/casual reader to? (Meaning not the fact of knowing, but more the fact of whether they read it)

I asked these questions more so to provoke the thought process. If we don’t have a mobile A1 equivalent & most of the people consume via mobile, then the argument of A1 placement or even webpage placement is mute. With everyone slamming the “mainstream media”, it think it’s important to look at what’s seen/consumed by the “average” reader vs where the publisher/editor thought it would be seen the most. The whole debate started bc someone was arguing that NYT doesn’t cover policy (which they do) and it’s not the first time I’ve heard that argument.

It also brings up the debate of some journalists print, TV or other not owning their influence in the election. People tend to forget that readers don’t just read the articles, they also follow many of the journalists on twitter, etc. Many of them want the readers to only focus on their produced work (whether they say that or not) and it’s just not a reality anymore. Media consumption is not just articles, placement & push notifications anymore.

This just my POV as a old(er) millennial, whose background is in interdisciplinary study with large focus on media and culture.

I think the big thing missing here is that most traffic to digital news sites is side-door. It’s not via the homepage. News is like water: it flows downhill and finds people where they’re at, be it in the FB Newsfeed, Twitter, email, push notifications, etc.

That’s not to say homepage traffic is dead or doesn’t matter. It does. But it’s better to think of the homepage as a sort of declaration of news value of the moment. It sets the tone for the day and it’s a representation of what the editors think is important. A story on the NYT or WaPo homepage will also cause other outlets to cover the story and elevate the general prominence of the story by virtue of it being a lead story on the homepage.

There are other ways that news outlets signal the importance of a story, these days:

Those are all signals of importance that news sites make, but they’re not all signals that the story itself is important. (That is: they might be important to the site’s bottom line – high traffic – but not particularly newsworthy.) Many of those things also tend to be algorithmic and not based on any editorial judgment.

That’s why I think newsletters like WTFJHT (one person’s trusted editorial judgment) or aggegators like Memeorandum (algorithmic based on linking behavior + editorial judgment) are so important. They send signals to news consumers about what are the most important stories each day.

I think the big thing missing here is that most traffic to digital news sites is side-door. It’s not via the homepage.

Yes! This is what I was trying to convey in a way, but you did it much better than I did.

That’s not to say homepage traffic is dead or doesn’t matter. It does.

I think it does, but not in the way most journalists think, because it does make others pick up the story but it doesn’t speak to how much “weight” they put behind it.

My overall point was that A1 stories in print not only held the weight on the fact that they were A1, but because print was the only way to consume news back in the pre-internet/social media era. So, the message was clear we covered (X) story. Nowadays, we need to find the A1 equivalent for mobile - it’s not so much based on the actual intake of the news but how the publications chose to present it. They need to take it factors of how it’s being consumed by the readers in order to make those choices. I would argue that the new A1 is the push notification (even tho, some news outlets tend to abuse it…eh, CNN). I don’t think that the that news outlets like NYT and WaPo are using it effectively as they could (but they are on the right track).

My second point is that is a journalist is seeing that their “A1 worthy” story isn’t gaining traction. They need to make it a talking point and “promote it”, without directly promoting it. Instead they are ranting and raving about how they covered all this important stuff, but you just didn’t see it or agree with it or it got lost in the news cycle and to top it off most take zero accountability for the influence they have especially during the 2016 election.
(Did anyone catch the Maggie H/Glenn Thrush clash yesterday? Between them and the world pretty much! lol)

they might be important to the site’s bottom line – high traffic – but not particularly newsworthy.

It’s a great point, but I think we’re talking about news value, not business value.

@matt Of course. Just pointing out that the motivations for putting stories in the online equivalent spot of “A1” (front page, above the fold) or for using any of the other signals of importance I mentioned aren’t always newsworthiness. Sometimes they are, but often meeting traffic goals, boosting signal on partner content, etc. cause stories to jump up into those top spots that don’t really have much newsworthiness. It’s hard to separate news and business value when it comes to decision-making at online publishers.

(Source: I was the editorial director at Mashable for 5 years. The stories in the top slot on the main page were usually there because of news decisions, but not always. Much of the page – especially below the fold – is algorithmic. And what got promoted on social or pitched out had more to do with traffic goals, except in the case of breaking news, though goals often aligned in that case.)