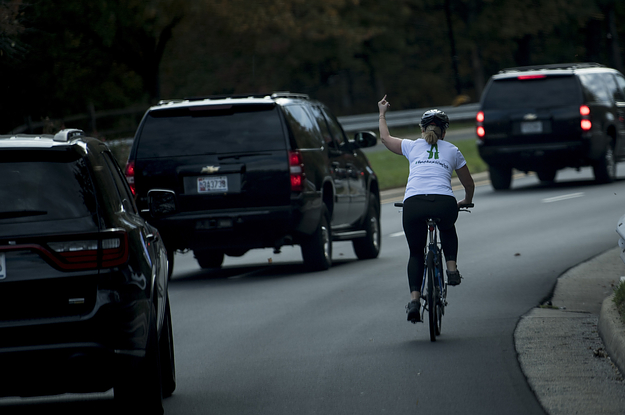 A Woman Who Was Fired For Flipping Off Trump's Motorcade Won An Election In...

Juli Briskman, a Democrat, beat the Republican incumbent for a seat on the Loudoun County Board of Supervisors.

NC courts have ruled that US Congressional maps must be redrawn. So, what is the first thing that @MyNCSenate leadership does? They appoint Chuck Edwards, who attended an ALEC workshop on perfecting the gerrymander, to the redistricting commission. #ncga https://t.co/FRiFTV4OSI 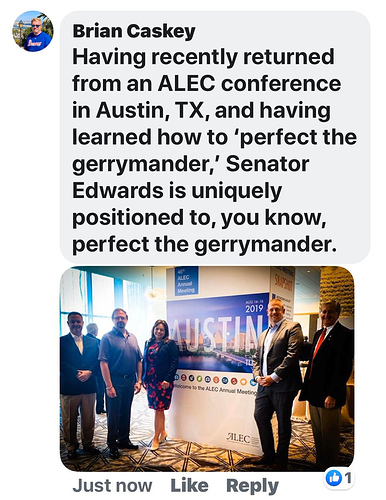 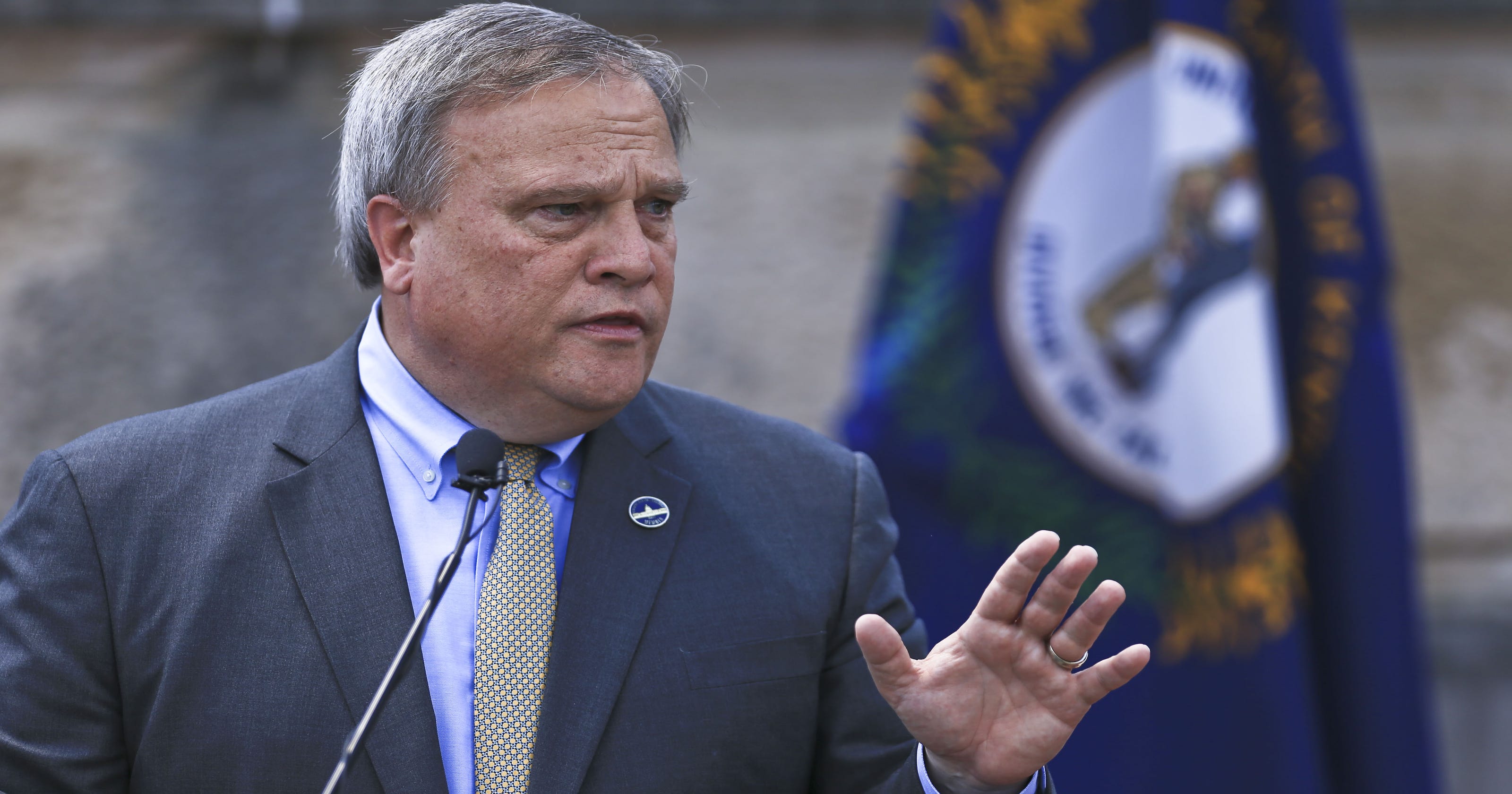 Stivers’ comments came shortly after Gov. Matt Bevin refused to concede to Attorney General Andy Beshear, who led by roughly 5,100 votes when all the precincts were counted.

“There’s less than one-half of 1%, as I understand, separating the governor and the attorney general,” Stivers said. “We will follow the letter of the law and what various processes determine.”

Stivers, R-Manchester, said based on his staff’s research, the decision could come before the Republican-controlled state legislature.

Under state law, Bevin has 30 days to formally contest the outcome once it is certified by the State Board of Elections. Candidates typically ask for a re-canvass of voting machines and a recount first.

The last contested governor’s race was the 1899 election of Democrat William Goebel.

Stivers said he thought Bevin’s speech declining to concede to Beshear was “appropriate.” He said believes most of the votes that went to Libertarian John Hicks, who received about 2% of the total vote, would have gone to Bevin and made him the clear winner.

A candidate can file a formal election contest with the state legislature, but it must be filed within 30 days of the last action by the state board of elections. The state board is scheduled to certify the results of the race for governor on Nov. 25 this year.

Under this contest, the candidate challenging the results must specify the grounds for the action, such as a violation of campaign finance rules or specific problems when it comes to how ballots were cast.

Such an election contest is covered under Section 90 of the state constitution, which addresses a “contest of election for Governor or Lieutenant Governor.”

Section 90 states: “Contested elections for Governor and Lieutenant Governor shall be determined by both Houses of the General Assembly, according to such regulations as may be established by law.”

Sam Marcosson, a constitutional law professor at the University of Louisville Brandeis School of Law, told The Courier Journal that this language of the state Constitution suggests there must be procedure established by law for a review of a contested election to take place by the House and Senate.

“They can’t just make them up,” Marcosson said.

Further, he said, such a review would be extremely risky for lawmakers to undertake without clear reasons for a contested election.

“If the House and Senate were just to proceed on vague allegations without proof, that raises serious questions about disenfranchisement of the voters who voted for Attorney General Beshear,” Marcosson said. “It’s an extraordinary proposition to suggest that the General Assembly would take vague allegations of unspecified irregularities and call into question a gubernatorial election.”

‘Leave as quickly as you came’: Readers sound off about Bevin and Kentucky governor’s race

'Leave as quickly as you came': Readers sound off about Bevin and Kentucky...

Readers who weighed in on the Kentucky governor's race are adamantly opposed to the legislature deciding the race between Matt Bevin and Andy Beshear.

The Courier Journal editorial board asked readers to weigh in on the Kentucky governor’s race, and their reactions were swift and strong.

They don’t mind a recanvass, but many are adamantly opposed to the Kentucky legislature getting involved, and they want Gov. Matt Bevin to man up and concede the race. 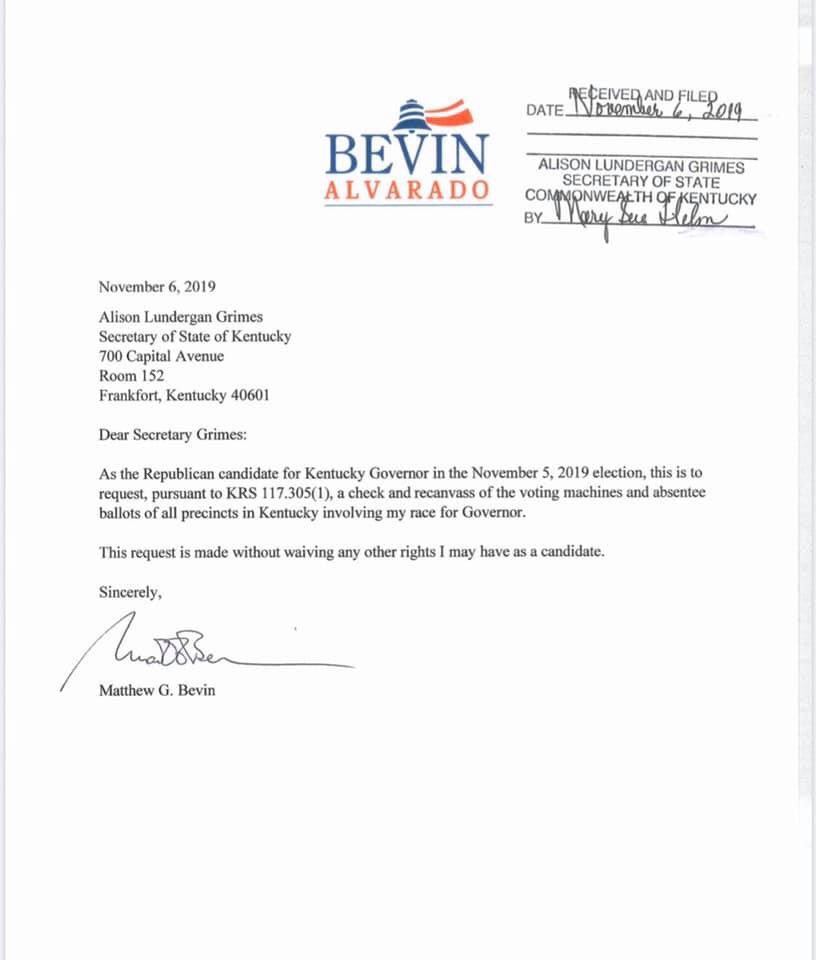 The Kentucky office of the Secretary of State has received a recanvass request from Governor Matt Bevin. The recanvass will be conducted Thursday, Nov. 14th at 9:00 a.m. #DemCastKY #DemCast 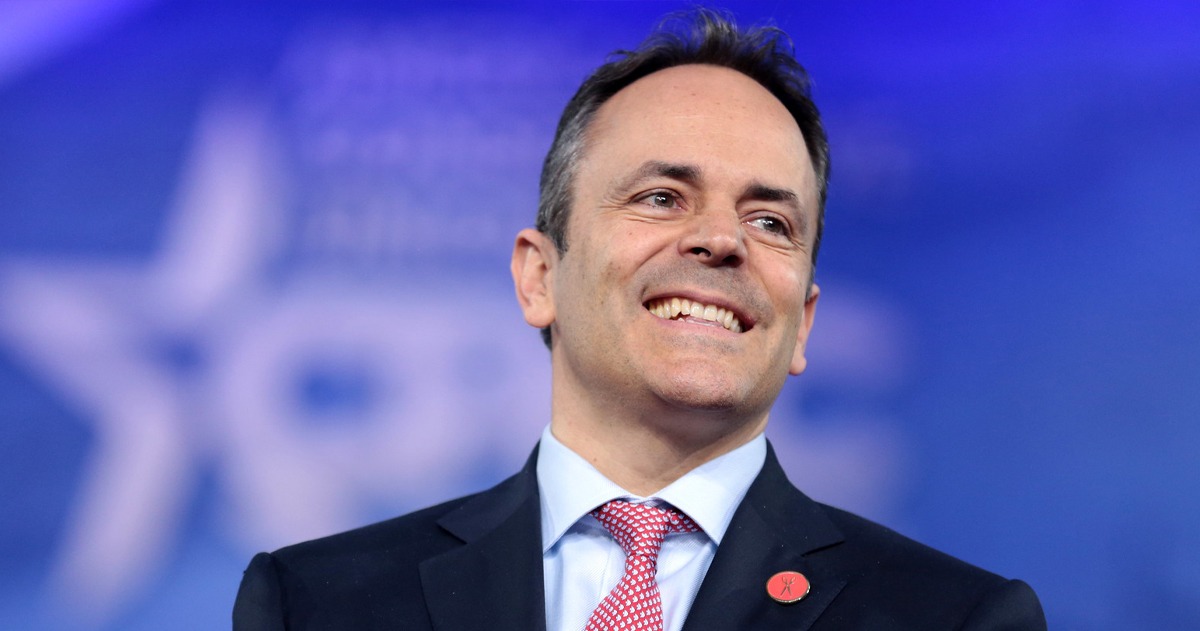 Gov. Matt Bevin lost to Democrat Andy Beshear by about 5,100 votes—less than half of one percent of the total.

DNC: Tulsi Gabbard Told Us She Won’t Run as Third-Party Candidate for President

Hawaii congresswoman sparked speculation about splitting from Democrats to run for White House.

Hope this is true. We don’t need a spoiler.

New Trump Facebook ad: “The far left knows that they have NO CHANCE of defeating President Trump in 2020, so they’ve resorted to violence to try to silence the MILLIONS of American Patriots who voted for him.” 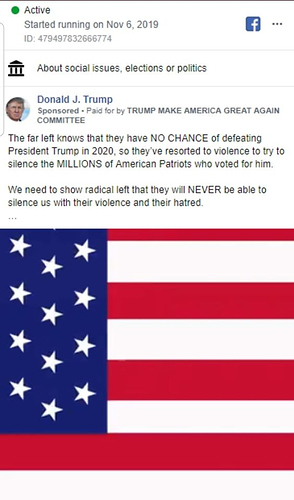 Sessions expected to announce plans to run for Senate

Doug Jones has a formidable war chest, but 2020 will be tough. Among GOP, Rep. Byrne will run as the Trumpiest w/Moore hoping for evangelical support & Merrill & Tuberville 🏈 in too. Sessions will split conservative votes. Last time Moore was in a split primary, he slid thru. https://t.co/zuCvLEdmrb

Sessions is in a tight spot. The man who gave the country Stephen Miller can’t run away from the Trump agenda but he clearly doesn’t have Trump’s blessing. If he splits the GOP vote he may facilitate a Roy Moore win. Doug Jones’ people would like nothing better. https://t.co/z83GsT619l
Pet_Proletariat 2019-11-07 00:05:24 UTC #410

Jeff Sessions vs Roy Moore in the Primary? Omfg, what a choice for voters! 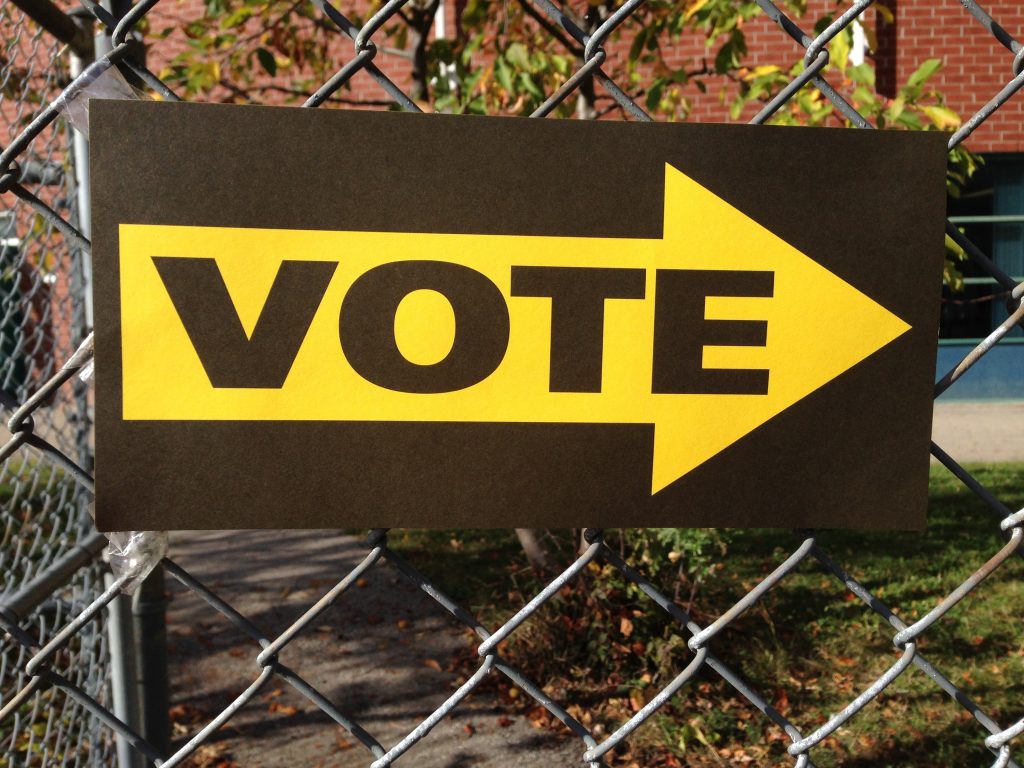 We want to highlight some of the down-ballot races that don't get as much attention but are just as meaningful as the Kentucky and Virginia races. 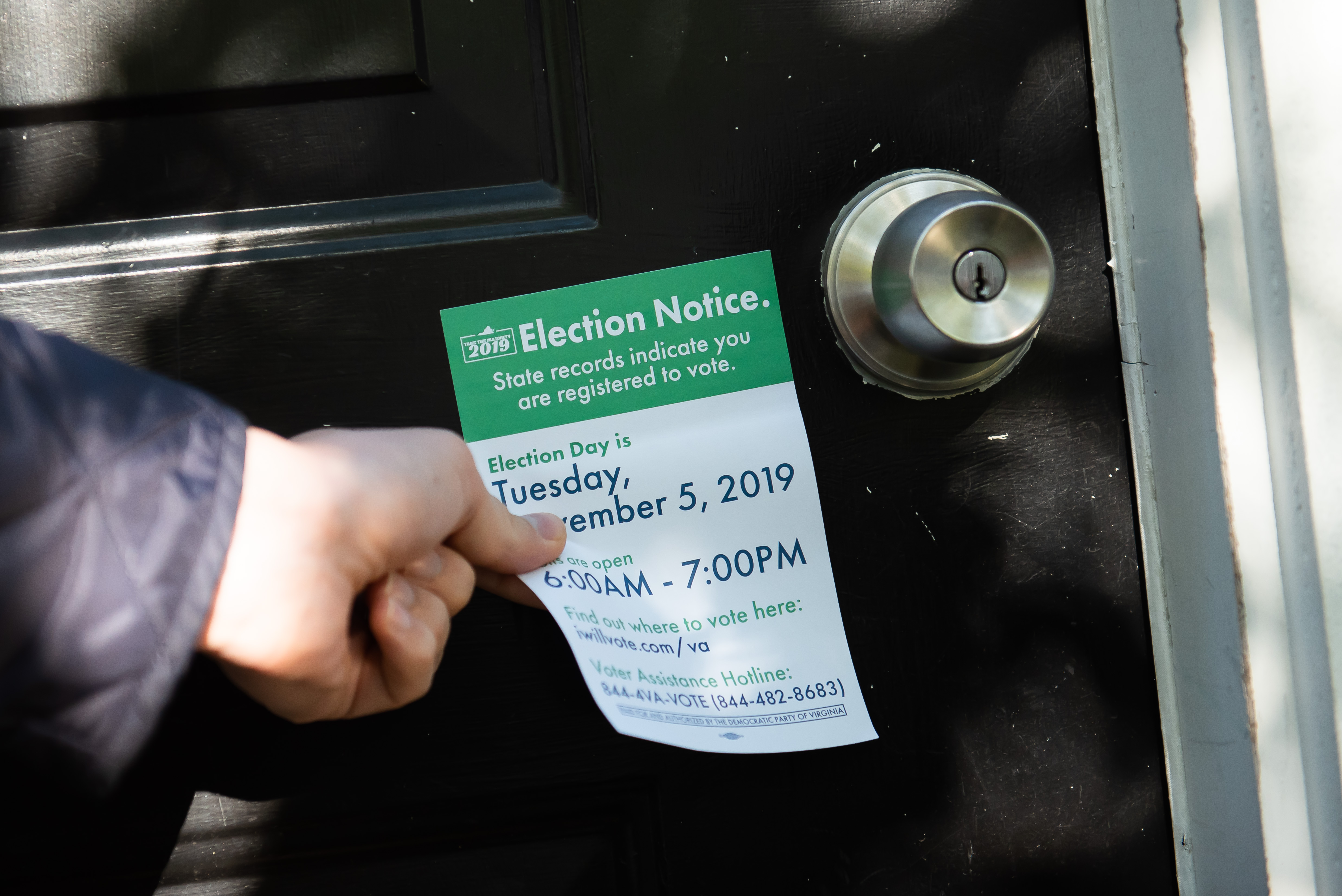 How did we flip the Virginia legislature and a House seat in Mississippi? Our volunteers had a massive impact on our campaigns through voter outreach and fundraising.

NEW: Joint statement from DOJ, DOD, DHS, DNI, FBI, NSA, and CISA on 2020 election security: "Russia, China, Iran, and other foreign malicious actors all will seek to interfere in the voting process or influence voter perceptions." 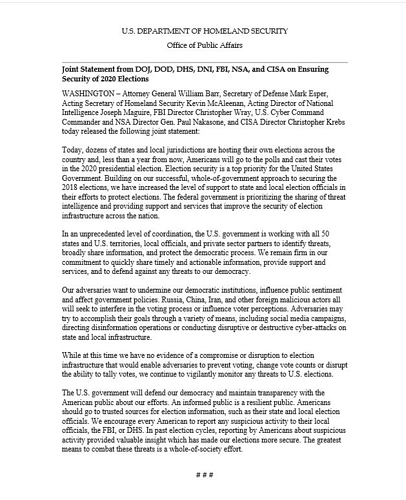 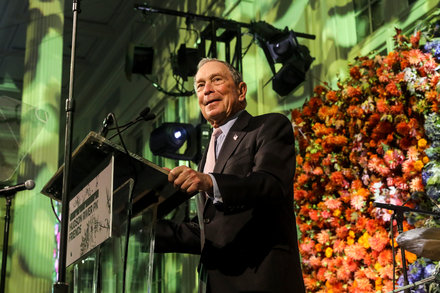 Mr. Bloomberg is expected to file paperwork this week in at least one state with an early deadline, although an adviser said the former New York mayor had not made a final decision to run. 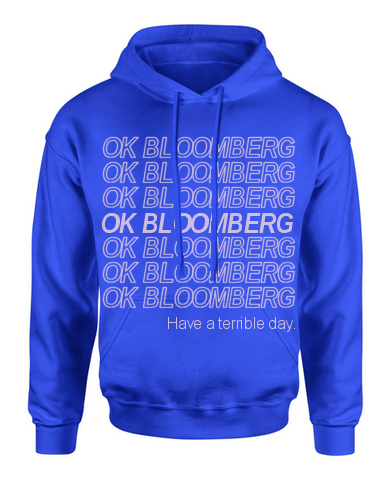 Speaking of billionaires, here’s some good back to back Sunday morning reading. Do billionaires have a singular redeeming function in our society? I’m really asking, I’ve been trying to come up with one that cannot be fulfilled by another group or class and it’s really hard. What do y’all think?

Richest 1% of Americans Close to Surpassing Wealth of Middle Class

Paired with some ideas. 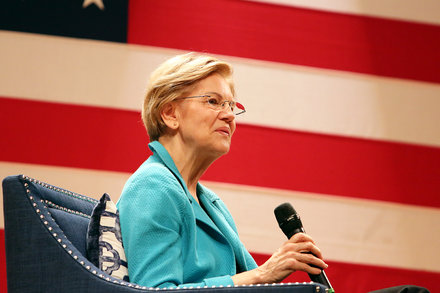 Warren Would Take Billionaires Down a Few Billion Pegs

Yet another one bites the dust. 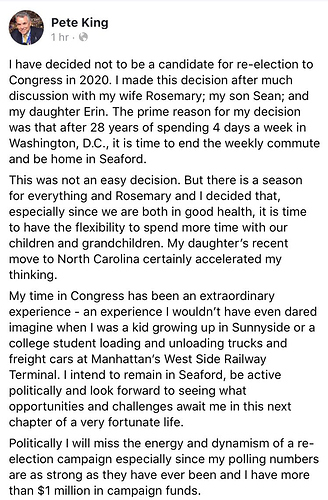 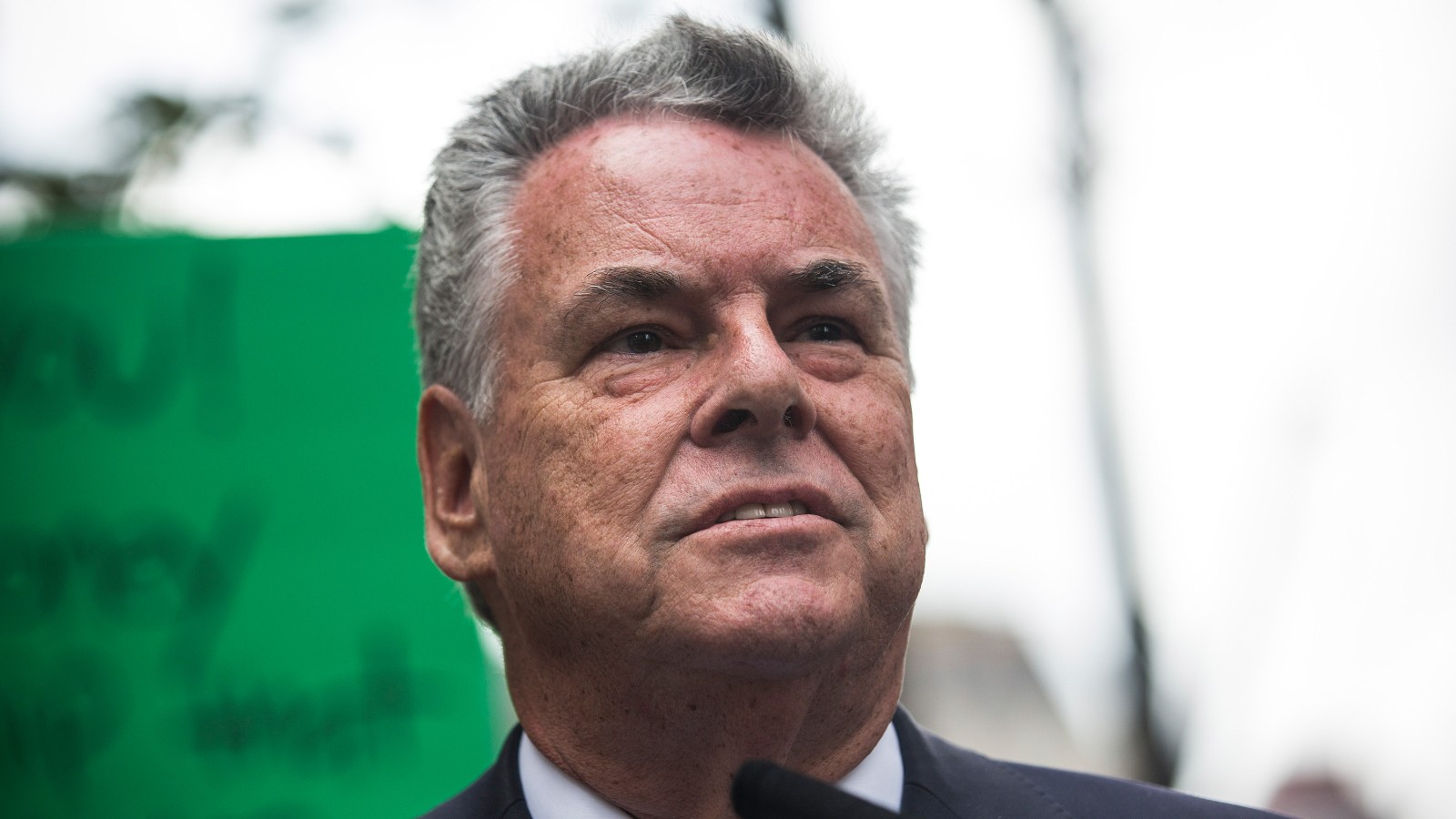 Longtime GOP Rep. Peter King announced on Monday he will not seek another term in office, becoming the latest in a growing list of Republicans who are not seeking reelection in 2020. 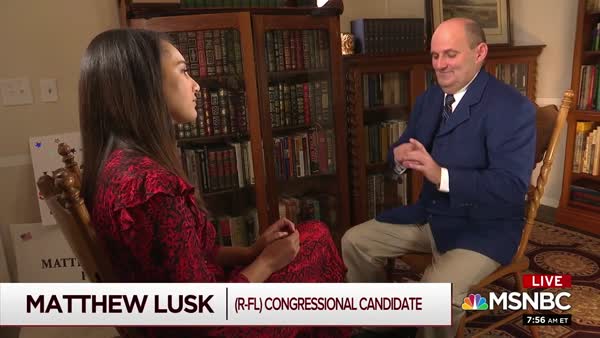 The really good news here is that King’s district (NY-2) is now definitely in play.

When you consider Trump’s huge drop in popularity after 2016 and take into account King’s massive loss of popularity during the same period, the prospects for a Republican win in this district have been greatly diminished.

This looks similar to what happened in my district (CA-49) leading up to 2016. The Republican incumbent, Darrell Issa, saw his popularity rapidly eroding. He had won in 2014 by a much smaller margin than his previous wins. He read the writing on the wall and decided not to run in 2016. This created an opportunity for Democrats – Mike Levin lead the charge and, sure enough, we flipped our district from red to blue. I believe Peter King has also read the writing on the wall. Now that he’s dropped out of the race, Democrats have an excellent chance of flipping this seat!

While many jeer at Mark Sanford ending his primary run against Trump, I would like to point out that a major reason he had to is because Trump’s GOP outright obstructed, CANCELING PRIMARIES in many states, including Sanford’s home state of South Carolina.

That is NOT alright. 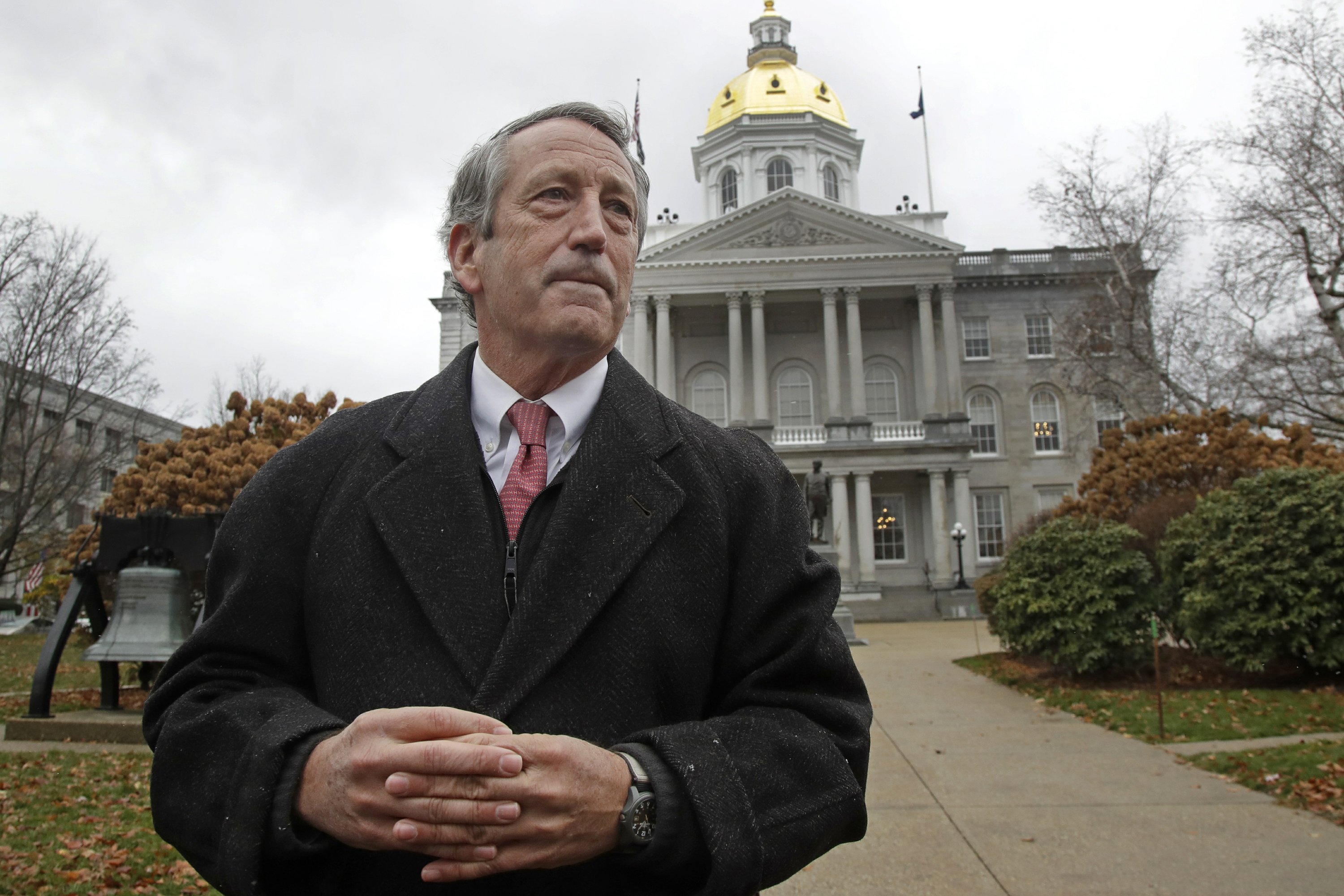 CONCORD, N.H. (AP) — Mark Sanford dropped his challenge to President Donald Trump for the Republican presidential nomination on Tuesday, saying the focus on impeachment has made it difficult for... 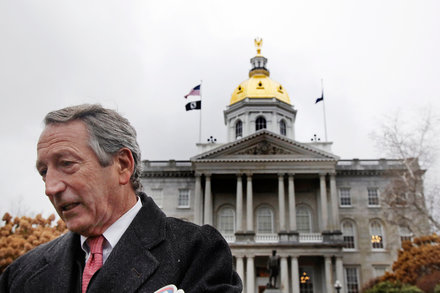 Mark Sanford Drops Trump Primary Challenge: ‘You’ve Got to Be a Realist’

Mr. Sanford, a former congressman and governor of South Carolina, ended his presidential campaign just two months after it began.

The Michigan Republican Party submitted a list of candidates Tuesday in which President Trump is the only GOP candidate set to appear on the primary ballot on March 10.

The Michigan Republican Party submitted a list of candidates Tuesday in which President Trump is the only GOP candidate set to appear on the primary ballot on March 10.

The Detroit Free Press reports the list containing only Trump may not be final, as Michigan Secretary of State Jocelyn Benson (D) has a different list of potential GOP candidates.

The Michigan GOP, however, is asking Benson to take up their list, saying that Trump is the only “legitimate candidate” in the GOP field, according to the news outlet.

“If other candidates want to get on the ballot, they should do a show of strength and get their nominating petitions,” Tony Zammit, spokesman for the Michigan Republican Party, told the Free Press. “We’re recommending that [Benson] approve only Trump for the Republican ballot.”

The candidates who appeared on both Benson’s list and the Michigan Republican Party’s list qualify to appear on the GOP primary ballot in the state, so it is unlikely Trump will run uncontested, the news outlet notes.

Laura Cox, chairwoman of the Michigan GOP, said Trump’s campaign was the only among Republican candidates that contacted her office about appearing on the ballot.

Several other states have moved forward in having Trump be the only Republican candidate on their respective ballots. Candidates challenging Trump for the GOP nomination have decried state parties who they allege are subverting the democratic process by closing off access to the primary ballot.

Michigan is widely considered a swing state in the upcoming election after Trump bested Democratic nominee Hillary Clinton by just over 10,000 votes in 2016.

This could backfire spectacularly for the GOP if Trump is impeached and removed, though it should be noted that the vote to remove is separate from the vote to ban from holding office.