America WAS great! During the most subsidized era in history 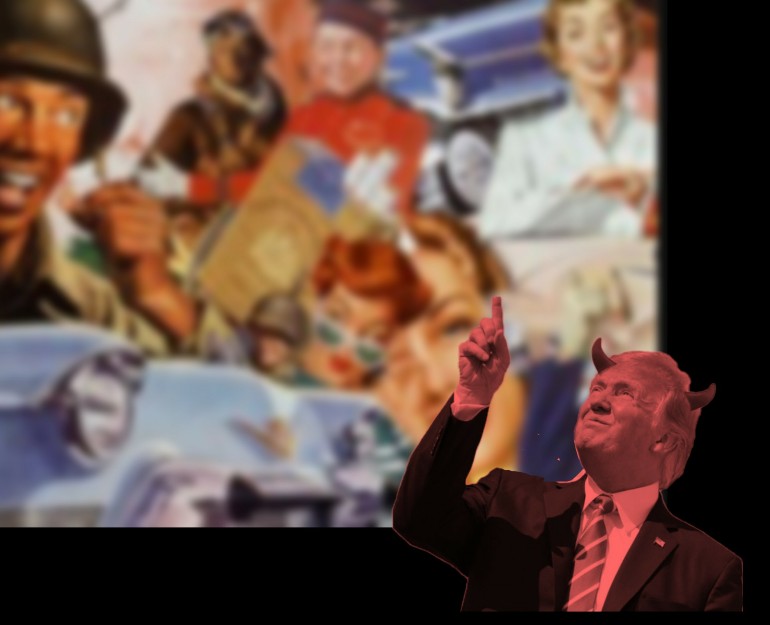 I can’t fathom why nobody seems to have noticed this: The era conservatives hearken back to, when America basked in economic prosperity, was the most subsidized period in American history.

For the first time, a generation could look to the security of Medicare, Medicaid, Disability and Social Security. An extraordinarily high tax rate on the wealthy promoted investment into business, apparently without turning all the rich people into poor people.

New students were attending college on Pell Grants, and so many veterans were able to purchase homes on the GI Bill an entire housing boom was created. (So was the Baby Boom.)

The Government was pouring money into new highways and biways, and into the unlikely concept that men could actually walk on the moon.

At the height of the Red Scare, when Communism was actually a threat and WWII was still visible in the rearview mirror, Americans were okay with all of this.

They didn’t demand a Conservative Libertarian utopia, where the sick and the poor would simply die in the streets. They didn’t complain that social programs caused people to quit their jobs and stay home to eat Velveeta on Ritz while watching Howdy Doody.

Now here is Trump and the whole GOP, claiming that undoing all of this will spark a return to The Good Life ™. Half the people alive today benefited from living during this very era. Nobody seems to be noticing that America is heading in the very opposite direction than it did the first time.

I’m not a historian, nor an economist. What am I missing?

If I had to take a guess, this.

The Powell Memo was a memorandum in the 70s that outlined a comprehensive subversion of the economy and society by corporatism. It involved a coordinated effort to undermine nearly every facet of society and it got corporations into lockstep with the government. This was a sea change in how business and government interacted.

Oh, I have no doubt whatsoever that there is purposeful action behind this, whether from the Powell Memo or anything else. Thomas Frank’s “What’s The Matter With Kansas” and Hedrick Smith’s “Who Stole The American Dream” detail the financial sabatoge of the Middle Class that kicked off the Reagan Era, and a variety of fingers were involved in that pie.

My confusion, though, is around all the people who AREN’T in power, who AREN’T part of a conspiracy to destroy the US from within; most voters, probably most elected officials, anyone who has studied history or is old enough to recall the post-war era.

I have to believe the vast majority of Americans aren’t in on this thing, even most Republicans. But I haven’t seen anyone, even in the media, present the issue of spending cuts directly alongside the nostalgia of American Greatness.

Appealing to mercy and kindness doesn’t go far in fighting for social spending. But the height of America’s prosperity, in the late 1950s, was clearly linked to the very same kinds of spending now demeaned.

Every single thing MAGA is doing is in direct opposition to MAG in the first place. It seems like average folks would make that connection and talk about it.