1/ A White House budget official directed the Defense Department to "hold off" on sending military aid to Ukraine less than two hours after Trump's July 25 phone call with Ukrainian President Volodymyr Zelensky, according to newly released emails. Roughly 90 minutes after Trump's call with Zelensky, Michael Duffey, a senior budget official, told Pentagon officials that Trump was personally interested in the Ukraine aid and had ordered the hold himself. Duffey also told the Pentagon to keep the information "closely held to those who need to know to execute the direction" due to "the sensitive nature of the request." The emails show Trump first became interested in the aid to Ukraine after seeing an article in the Washington Examiner on June 19 titled, "Pentagon to send $250M in weapons to Ukraine," and that some officials were concerned that withholding the aid could be a violation of the Impoundment Control Act of 1974. Democrats are citing the emails to fuel renewed calls for witnesses to testify in the Senate impeachment trial. (Washington Post / NBC News / New York Times / CNN / Reuters / CBS News) 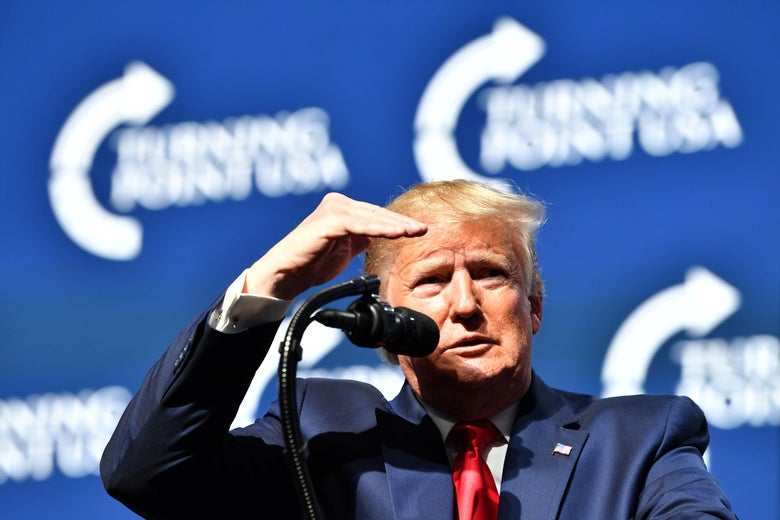 An Attempt to Fact Check Trump’s Rant Against Windmill Fumes

The president has long harbored a vendetta against windmills.

Because Trump’s remarks were so incoherent, it’s actually difficult to fact check him. How can you fact check someone who is just tossing out a jumble of words? At any rate, Slate made a valiant effort.

I’m posting this, not so much to expose Trump’s lies about windmills (of course everything he says about them is wrong), but to show how much his mental state is deteriorating. He’s never made much sense, but now he’s really showing signs of losing what little grasp he had of language. Just read his actual words below or watch the video.

In yet another puzzling rant against wind energy on Saturday, President Donald Trump claimed to be the world’s foremost expert on windmills and detailed laws against shooting bald eagles. The president made the remarks during an hour-long speech at the Turning Point USA Student Action Summit in Florida that also touched on impeachment, immigration, and the 2020 election.

President Trump: “I never understood wind, you know I know windmills very much. I’ve studied it better than anybody.” 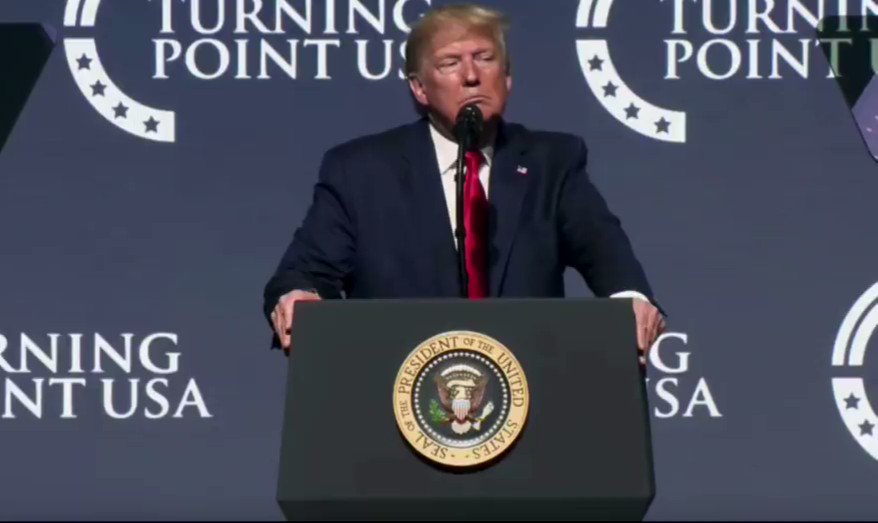 The windmill condemnations came roughly halfway through the speech after an inscrutable tirade about Elizabeth Warren and the Green New Deal. Here is a portion of what he said about wind energy, according to the White House’s own transcript of the speech:

I never understood wind. You know, I know windmills very much. I’ve studied it better than anybody I know. It’s very expensive. They’re made in China and Germany mostly—very few made here, almost none. But they’re manufactured tremendous—if you’re into this—tremendous fumes. Gases are spewing into the atmosphere. You know we have a world, right? So the world is tiny compared to the universe. So tremendous, tremendous amount of fumes and everything. You talk about the carbon footprint—fumes are spewing into the air. Right? Spewing. Whether it’s in China, Germany, it’s going into the air. It’s our air, their air, everything—right?

So they make these things and then they put them up. And if you own a house within vision of some of these monsters, your house is worth 50 percent of the price. They’re noisy. They kill the birds. You want to see a bird graveyard? You just go. Take a look. A bird graveyard. Go under a windmill someday. You’ll see more birds than you’ve ever seen ever in your life. You know, in California, they were killing the bald eagle. If you shoot a bald eagle, they want to put you in jail for 10 years. A windmill will kill many bald eagles. It’s true.

The rambling nature of the remarks makes it a bit difficult to fact check the assertions the president was making here. It’s not clear what evidence he has that windmills create more “fumes” through manufacturing compared to anything else, though studies have found that wind energy has a particularly small carbon footprint compared to other methods of generating electricity. Trump’s suggestion that the U.S. doesn’t benefit from windmill manufacturing is also misleading – according to the Department of Energy, the wind energy industry employs tens of thousands of people in the U.S. and wind energy technicians is one of the fastest growing jobs in the nation.

Trump has previously claimed that windmills depress property values by 65 percent, though several academic studies found that this isn’t the case. The Washington Post further notes that wind turbines do kill hundreds of thousands of birds per year, but fossil fuel plants and the kinds of glass-covered skyscrapers that Trump is fond of building are separately responsible for far more bird deaths. Also, the maximum sentence for killing a bald eagle in California is two years, not ten. All that being said, the president’s claim that “the world is tiny compared to the universe” checks out.