1/ Speaker Nancy Pelosi said she would send the articles of impeachment to the Senate "when I'm ready – and that will probably be soon." Pelosi's comments came after Democrats started pushing to end the holdout, believing that Mitch McConnell will never relent on the rules for the trial. Pelosi, however, reiterated her demand to McConnell that he first detail the rules for a Senate trial so she could choose a team of "impeachment managers," who will prosecute the House's abuse of power and obstruction of Congress case, saying "Is that too much to ask?" McConnell, meanwhile, has signed onto a resolution seeking to change the rules of the Senate to dismiss articles of impeachment if they are not transmitted within 25 days of their approval – in this case, Jan. 12. (New York Times / Politico / Axios / CNN / Washington Post / Wall Street Journal / NBC News)

Justice Dept. winds down Clinton-related inquiry once championed by Trump. It found nothing of consequence. Justice Dept. winds down Clinton-related inquiry once championed by Trump. It...

U.S. Attorney John Huber was tasked with reviewing the FBI’s work on the Clinton Foundation and Uranium One. He has found nothing worth pursuing, according to people familiar with the matter.

A Justice Department inquiry launched more than two years ago to mollify conservatives clamoring for more investigations of Hillary Clinton has effectively ended with no tangible results, and current and former law enforcement officials said they never expected the effort to produce much of anything.

John Huber, the U.S. attorney in Utah, was tapped in November 2017 by then-Attorney General Jeff Sessions to look into concerns raised by President Trump and his allies in Congress that the FBI had not fully pursued cases of possible corruption at the Clinton Foundation and during her time as secretary of state, when the U.S. government decided not to block the sale of a company called Uranium One.

As a part of his review, Huber examined documents and conferred with federal law enforcement officials in Little Rock, Ark., who were handling a meandering probe into the Clinton Foundation, people familiar with the matter said. Current and former officials said that Huber has largely finished and found nothing worth pursuing — though the assignment has not formally ended and no official notice has been sent to the Justice Department or to lawmakers, these people said.

Analysis | The Trump campaign has over $1 million in outstanding bills from...

Albuquerque is the most recent city to request reimbursement — to the tune of more than $200,000.

Albuquerque has joined a lengthy list of U.S. cities with a simple request: that President Trump’s campaign pay for the costs incurred during a rally. On Wednesday, the Albuquerque Journal reported that the city sent an invoice to Trump’s reelection campaign in an effort to recoup more than $211,000 in expenses from a September rally. That figure includes more than $71,000 in police overtime.

The Trump campaign’s indifference to municipal bills became a significant issue earlier this month when the city of Minneapolis attempted to get paid in advance for a rally Trump was planning to hold in the city. The president and his campaign publicly berated Minneapolis’s mayor. But even then it was easy to see why a city would want Trump’s team to pay in advance.

As the Minneapolis rally loomed, CNN went back to a number of cities that had been identified in June by the Center for Public Integrity as places with outstanding bills in to the Trump campaign. CNN found that there was at least $841,000 still outstanding. The total, though, is more than that: Dave Levinthal, who reported the initial tallies for the Center for Public Integrity, confirmed in an email to The Washington Post on Thursday that he had checked back with all the cities he had identified in July and that none had been paid as of his most recent outreach. 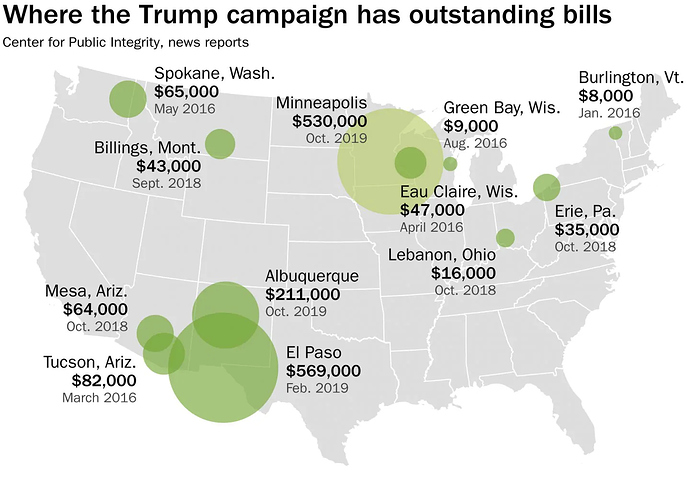 Before being elected president, Trump had earned a reputation for not paying vendors who had done work for the Trump Organization. In this case, though, the bills fall into something of a gray area. The campaign generally doesn’t sign contracts for additional police officers, so the cities don’t have binding agreements to recoup the costs. As Levinthal suggested in June, it’s more of a norm that the bills would be paid — and Trump has certainly earned a reputation for sidestepping norms since entering the world of politics.

In the context of Trump’s campaign, these costs are not significant. Earlier this week, the Republican Party celebrated having raised more than $300 million through the first three quarters of 2019. Reimbursing these cities for the costs they incurred from Trump’s rallies, then, would eat up a little more than a day’s average fundraising.

Don’t expect that to happen.