1/ An intelligence official in charge of election security warned the House Intelligence Committee last week that Russia was interfering in the 2020 campaign to try to get Trump re-elected. Trump’s allies challenged the conclusions by Shelby Pierson during the meeting, arguing that Trump has been tough on Russia and strengthened European security. Trump reportedly “erupted” and “berated” his acting director of national intelligence, Joseph Maguire, in the Oval Office following the meeting over what he perceived as disloyalty. Trump also erroneously believed that Pierson had given information exclusively to Rep. Adam Schiff, complaining that Democrats would “weaponize” the disclosure. Yesterday, Trump announced that he was replacing Maguire with Richard Grenell, the ambassador to Germany and a vocal Trump supporter. (Washington Post / New York Times)

Trump said he wouldn’t immediately pardon Stone but would intervene if courts don’t overturn his conviction .

They trapped him in a perjury trap just like General Flynn. It’s disgusting what these prosecutors in their self-righteousness which makes me puke, how they go after these people and then say they are doing God’s work. 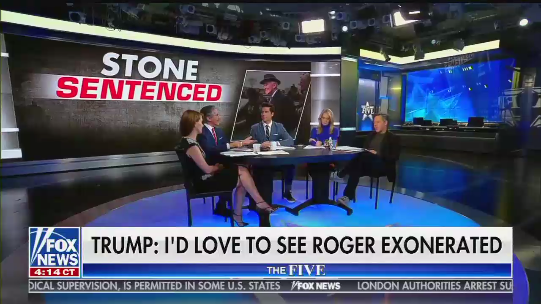 14 Coronavirus-infected Americans were flown home ON A PLANE FULL OF HEALTHY PEOPLE against the CDC’s advice to keep them in Japan instead to minimize risk of the virus’ spread!

The Trump State Department overrode the advice of the Centers for Disease Control and put American citizens infected with the coronavirus on a plane full of healthy people, despite the risk that they could spread the infection. The Washington Post...