T’s call to Putin on Monday, was a reminder of how eager he is to get Russia reinstated with the G-7, to G-8. But the other leaders are not having it. 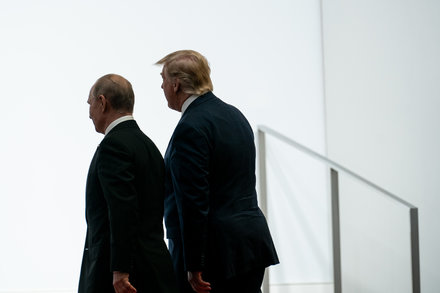 Trump and Putin Discuss Russia’s Attendance at G7, but Allies Are Wary

The British and Canadian governments oppose admitting Russia into the bloc, as President Trump continues a renewed courtship of Russia’s leader.

President Trump and President Vladimir V. Putin of Russia spoke by telephone on Monday, two days after Mr. Trump said he would invite Mr. Putin to attend a Group of 7 summit in the United States in September, the latest instance of a renewed round of personal diplomacy between the two leaders this year.

Hours after the Kremlin first described the call on its website, the White House released a statement saying that the men had discussed “the latest efforts to defeat the coronavirus pandemic and reopen global economies” and “progress toward convening the G7.” A largely similar Kremlin readout said Mr. Trump had initiated the call, and a senior White House official said Mr. Trump had extended a personal invitation to Mr. Putin to attend the gathering, which the president will host.

Russia was expelled in 2014 from what was known as the Group of 8 after Mr. Putin annexed Ukraine’s Crimean Peninsula. Mr. Trump has supported re-entry but even as he reached out to Mr. Putin, key U.S. allies reiterated that Russia was an outlaw nation that should be denied readmittance into the group of industrialized nations, whose members include the United States, Canada, France, Germany, Britain, Italy and Japan.

Speaking to reporters on Monday, a spokesman for the British prime minister, Boris Johnson, said Britain opposed allowing Russia back into the group because his government had “yet to see evidence of changed behavior which would justify readmittance,” according to Reuters.

Prime Minister Justin Trudeau of Canada agreed, saying that Russia’s “continued disrespect and flaunting of international rules and norms is why it remains outside of the G7, and it will continue to remain out.”

But neither man would say whether his country would boycott the planned gathering, originally scheduled for June but postponed because of the coronavirus, if Mr. Putin attended as a guest observer.