Is someone developing a plan for the day after the election when Trump declares the results invalid and sends his Portland-trained secret police to smash down anybody who disagrees? I’m going to be really angry if there’s just a lot of hand-wringing as if we didn’t have any idea this could happen. The Trump administration is openly working on its contingency plan in the event Trump loses in November. Biden should have a whole wing of his campaign focused on getting out ahead of this, and he should be telling us what they’re going to do in the event this happens so we can all prepare. Is this in the works and I’ve just missed it? From what I’ve seen, Biden is proceeding on the assumption that the existing system would suffice to escort Trump out of the White House, and nothing I’ve seen in the past few years supports this position. It feels like all we’ve done since candidate Trump entered our lives is bank on the fact that the unimaginable couldn’t possibly happen while continuing to register dismay and amazement as we watch it happening over and over.

Is someone developing a plan for the day after the election when Trump declares the results invalid and sends his Portland-trained secret police to smash down anybody who disagrees?

Plenty of stuff in motion on this front… 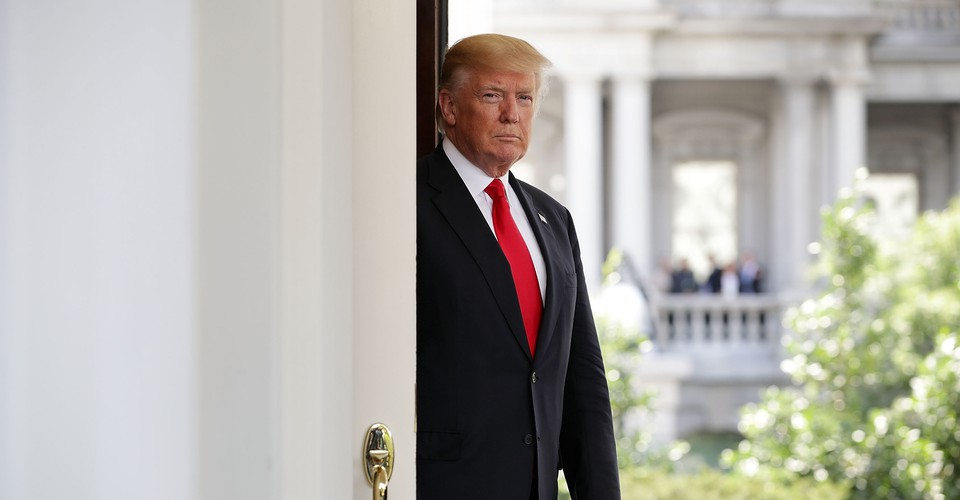 Some of the president’s opponents fear that he’ll refuse to leave the White House if he loses the election. Here’s why.

Biden is getting out in front with the FBI’s revelations that indeed foreign powers are in play for this upcoming election - Russia, Ukraine and China for sure. The FBI will brief Congress on it too.

This is a good move considering that Obama was aware of Russian election interference was happening and did NOT publicize it for fear he’d be seen as a disrupter and favoring Clinton, but also that Sen Majority McConnell was not going to allow this information to come out prior to the election.

As much as this issue can get out and previewed for what it is is a good thing because Trump is doing nothing, and Republicans even less to protect the election. And all of it hinges on the issue of T not leaving if he loses because he feels that the election was unfair. 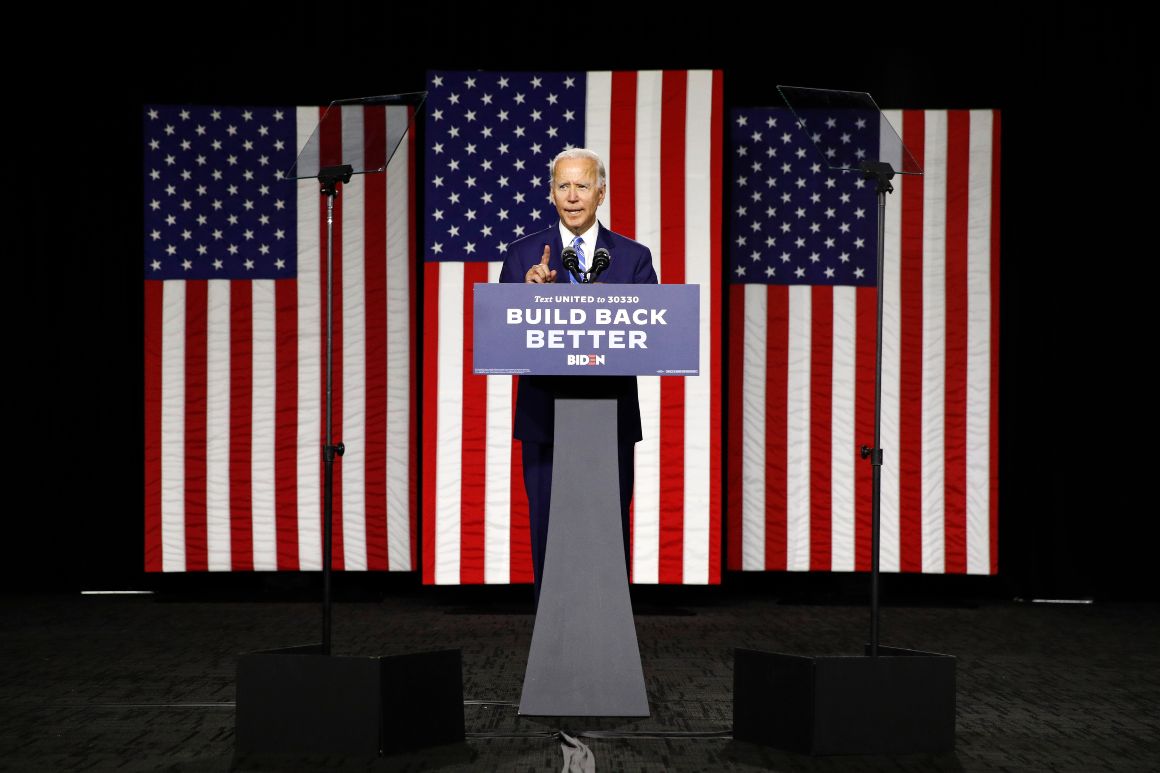 Inside the Biden campaign's pushback against foreign interference

Many of the former vice president’s top aides witnessed Russia’s attack on Hillary Clinton in 2016. They see history repeating itself — and are determined to fight back.

Joe Biden has released his most comprehensive statement yet warning against foreign election interference and threatening to hold the Kremlin and other foreign governments accountable for any meddling if he is elected president.

In the 700-word statement, first obtained by POLITICO, the presumptive Democratic nominee said he “will treat foreign interference in our election as an adversarial act that significantly affects the relationship between the United States and the interfering nation’s government,” and plans to “direct the U.S. Intelligence Community to report publicly and in a timely manner on any efforts by foreign governments that have interfered, or attempted to interfere, with U.S. elections.”

He added that he would direct his administration “to leverage all appropriate instruments of national power and make full use of my executive authority to impose substantial and lasting costs on state perpetrators”—including potential sanctions and cyber responses—and will call on the the Pentagon, DHS, the FBI, and the State Department “to develop plans for disrupting foreign threats to our elections process.”

Biden’s remarks came on the same day that Democratic lawmakers raised new concerns about foreign influence operations in a letter to the FBI requesting fresh counterintelligence briefings ahead of the election. And they come as Biden’s campaign advisers have begun speaking out with fresh urgency about what they fear could become a serious threat.

“Despite the exposure of Russia’s malign activities by the U.S. Intelligence Community, law enforcement agencies, and bipartisan Congressional committees, the Kremlin has not halted its efforts to interfere in our democracy,” Biden’s statement reads. “Congress passed with an overwhelming bipartisan majority the Countering America’s Adversaries Through Sanctions Act of 2017. The Trump administration has thus far failed to make adequate use of these authorities to counter and deter foreign election interference.”

The former vice president’s comments reflect a growing concern not only about President Donald Trump’s unwillingness to commit to not accepting foreign help in the election, but also about what the former vice president’s campaign and bipartisan members of Congress see as an escalating disinformation campaign emerging out of Ukraine, said people familiar with his thinking.

My Statement on Foreign Interference in U.S. Elections

Foreign interference in the U.S. electoral process represents an assault on the American people and their constitutional right to vote…

Thanks Matt! I posted a similar question on Facebook and one of my friends just pointed me toward this same article, which led me to this page that made me feel a little better: Roundtable: Former Military Officials On The Protests Against Police Violence | On Point

The monument was dedicated in 1875, a decade after the end of the war. 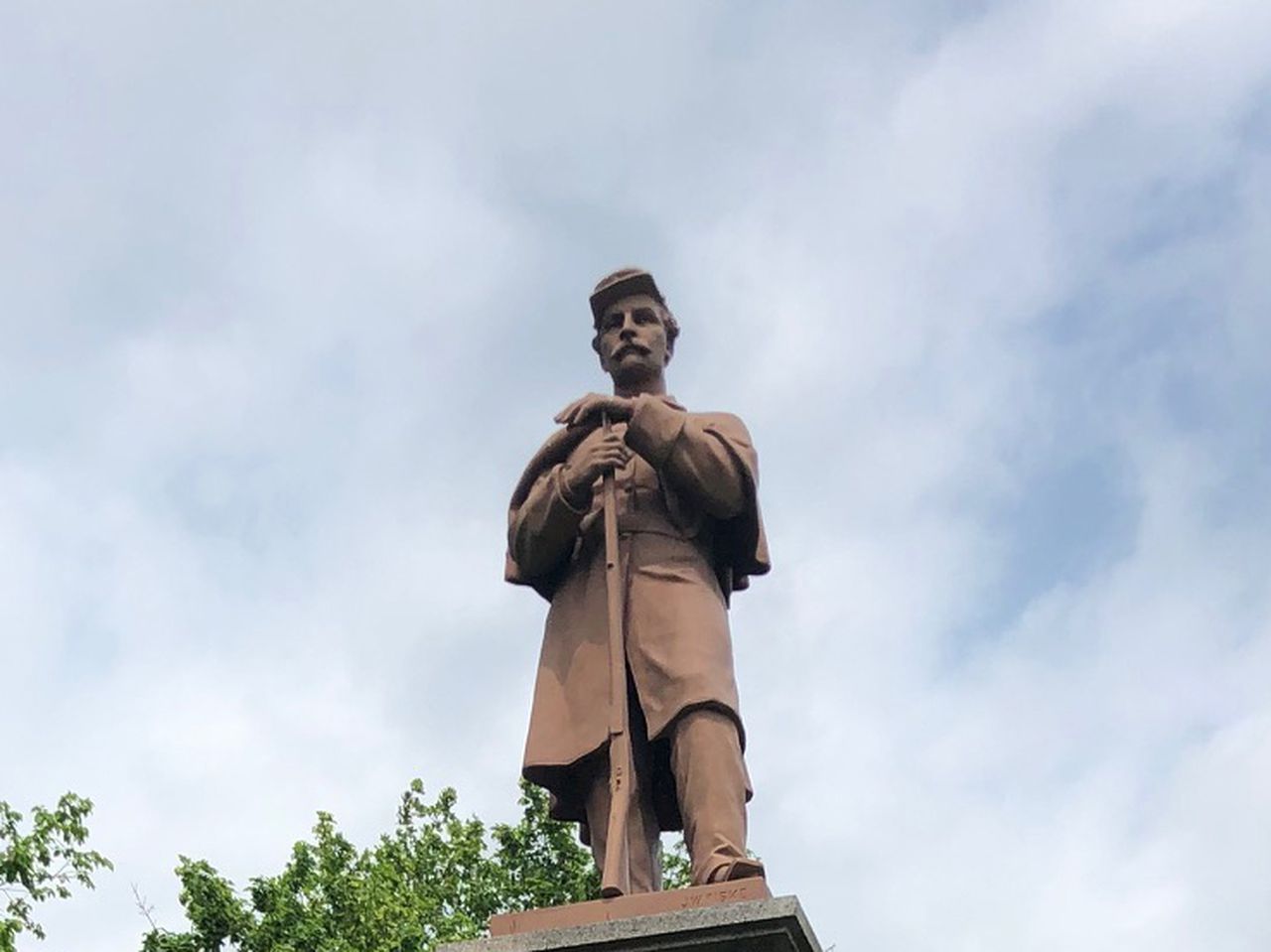 The monument was dedicated in 1875, a decade after the end of the war.

Someone Tore Down a Union Army Statue in Saratoga Springs. Why?

The monument in a New York park was dedicated to men who volunteered to fight for the Union during the Civil War. It is unclear who toppled it, and for what reason. 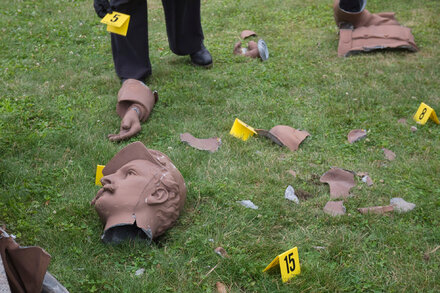 Someone Tore Down a Union Army Statue in Saratoga Springs. Why?

The monument in a New York park was dedicated to men who volunteered to fight for the Union during the Civil War. It is unclear who toppled it, and for what reason. Three House committees had told the high court that their investigations into the president's finances "remain urgent."

The Supreme Court on Monday said it will not speed up the process for getting President Donald Trump’s legal battle with House Democrats over the president’s business records back into the lower courts.

The House legal counsel had asked the court to immediately put into effect its decision this month that said while Trump did not have an absolute right to refuse to comply with legitimate congressional subpoenas for documents, Congress also did not have unlimited authority to seek materials from a president because its demands must be connected to a legitimate legislative purpose.

With No Final Say, Trump Wants To Change Who Counts For Dividing Up Congress’ Seats 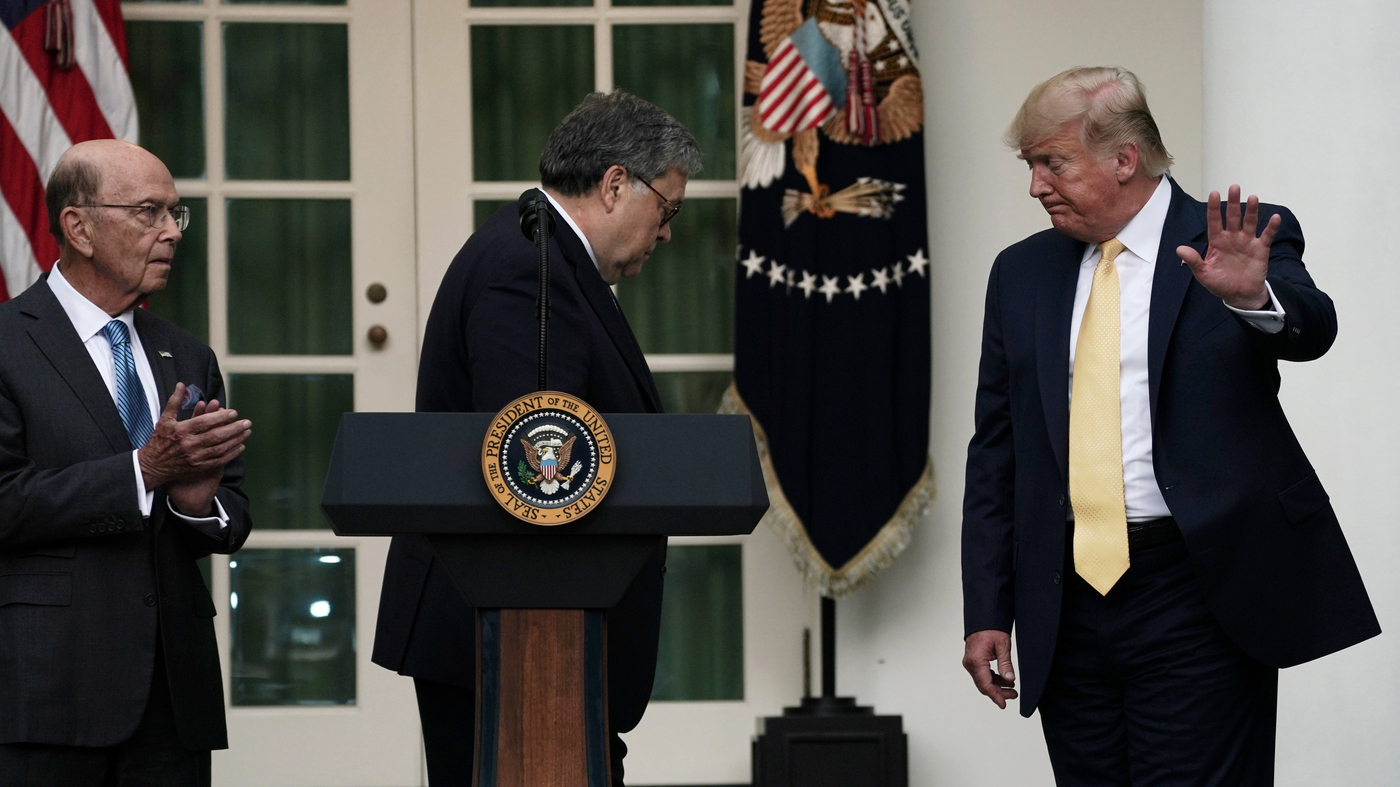 With No Final Say, Trump Wants To Change Who Counts For Dividing Up Congress'...

The president is calling for unauthorized immigrants to be excluded from census numbers used to divide seats in Congress. The Constitution says the count must include every person living in the U.S.

President Trump is signing a memorandum Tuesday that calls for an unprecedented change to the constitutionally mandated count of every person living in the country — the exclusion of unauthorized immigrants from the numbers used to divide up seats in Congress among the states.

The White House has not provided any additional details and has not yet released the text of the memorandum, but in a written statement, a White House official who spoke on background said the “action will clarify that illegal aliens are not to be included for the purpose of apportionment of Representatives following the 2020 Census.”

But the move by the president, who does not have final authority over the census, is more likely to spur legal challenges and political spectacle in the last months before this year’s presidential election than a transformation of the once-a-decade head count.

Since the first U.S. census in 1790, both U.S. citizens and noncitizens — regardless of immigration status — have been included in the country’s official population counts.

The fifth sentence of the Constitution specifies that “persons” residing in the states should be counted every 10 years to determine each state’s share of seats in the House of Representatives. The 14th Amendment goes further to require the counting of the “whole number of persons in each state.”

It is Congress — not the president — that Article 1, Section 2 of the country’s founding document empowers to carry out the “actual enumeration” of the country’s population in “such manner as they shall by law direct.”

In Title 2 of the U.S. Code, Congress detailed its instructions for the president to report to lawmakers the tally of the “whole number of persons” living in each state for the reapportionment of House seats. In Title 13, Congress established additional key dates for the “tabulation of total population.”

The state of Alabama, however, is arguing in an ongoing federal lawsuit that the framers of the Constitution did not intend for the term “persons” to include immigrants living in the country without authorization. Alabama says it’s trying to avoid losing a seat in Congress after the 2020 census by seeking to leave out unauthorized immigrants from the results of the national count that are used to reapportion the U.S. House.

Trump’s announcement, first signaled in a Politico newsletter last week, comes just over a year after the administration backed down in its failed attempt to add the now-blocked citizenship question to the 2020 census.

In July 2019, the president issued an executive order to use government records, including from state departments of motor vehicles and federal agencies such as the Department of Homeland Security, to produce anonymized citizenship data that could be used to redraw voting districts in a way that, a GOP strategist concluded, would politically benefit Republicans and non-Hispanic white people.

With the national census self-response rate at just over 62%, the White House announcement threatens to derail the Census Bureau’s efforts to finish tallying up roughly four out of 10 households that have not filled out a census form on their own.

The agency’s operational plan for the 2020 census includes specially designed efforts, such as providing online forms and call centers in 13 languages, to try to make sure the census includes undocumented immigrants and other populations the bureau considers “hard-to-count.”

According to the Census Bureau’s residence criteria for determining how to count different groups of residents for the 2020 census, citizens of foreign countries who are living in the U.S. are supposed to be counted “at the U.S. residence where they live and sleep most of the time,” while international visitors should not be counted.

The bureau has been relying on ads and community groups to help ramp up its outreach to households with immigrants, people of color and other historically undercounted groups, many of whom remain distrustful of sharing their information with the government despite federal laws that require the Census Bureau to keep personally identifiable census information confidential until 72 years after it’s been collected and prohibit that information from being used against an individual.

The administration has also raised concerns in recent weeks by making two new political appointments at the bureau. The move has sparked an inquiry by the inspector general for the Commerce Department, which oversees the bureau. Democratic lawmakers and professional associations, including the American Statistical Association and the American Economic Association, are questioning whether the appointments of Nathaniel Cogley, a political science professor, and Adam Korzeniewski, a former political consultant to a YouTube personality known for racist pranks, are a partisan attempt to interfere with the census.