Earlier this month, the Trump administration launched “Operation Legend” in Kansas City, Missouri, with agents from the FBI, U.S. Marshals Service, Drug Enforcement Administration and the Bureau of Alcohol, Tobacco, Firearms and Explosives to fight “the sudden surge of violent crime.” Trump claimed that the movement to defund traditional policing efforts had led to a spike in violent crime.

Barr claimed feds in KC made 200 arrests in two weeks. That’s not even close to true.

Barr claimed feds in KC made 200 arrests in two weeks. That’s not even close...

The number baffled many in Kansas City, including local officials who said they could not vouch for it.

Speaking with McClatchy after the Wednesday event, the senior Justice Department official clarified that the 200 figure included arrests dating back to December 2019.

It also included, the official said, both state and FBI arrests in joint operations.

The official said Barr was referring to the number of arrests made in the city since the launch of Operation Relentless Pursuit, a precursor effort to Operation Legend that surged federal agents in U.S. cities facing crime waves, including Kansas City.

“We have made since December 2019 200 arrests in Kansas City,” the senior official said, referring to the launch of that initial operation. “Legend is essentially a continuation of that.”

Prior to the DOJ’s correction of the misinformation, Kansas City Mayor Quinton Lucas had cast doubt on the claim. Lucas said that he was aware only of one arrest that had been announced by the U.S. attorney’s office in Kansas City.

“You can’t verify it because nothing can be verified… This is where some of the confusion goes on,” Lucas said.

Lying in an easily checkable way to make Trump look tougher on crime, is a hallmark Trumpian move. I’m not surprised.

Hospitals had two days to stop reporting coronavirus data to the CDC and instead report data to a new portal maintained by the Department of Health and Human Services .

More on this from former CDC head, Tom Frieden and Cyrus Shaphar in NYT Opinion piece which tells us that useful information is missing. 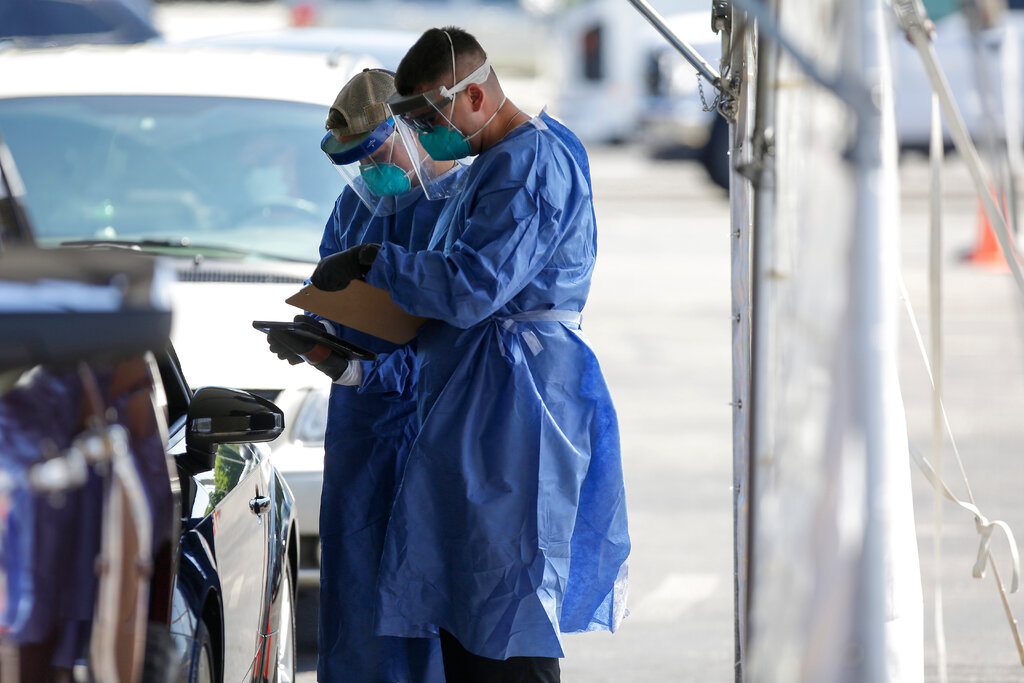 Opinion | We Searched for Covid-19 Data. Here’s What We Couldn’t Find.

Fifteen things we need to know about the coronavirus.

We aren’t tracking the public health equivalent of vital signs. That’s one big reason the United States is losing the battle against Covid-19.

We have a per capita death rate five times the global average, cases are increasing, and our economy and educational systems will not recover until we get the virus under control. Last week’s abrupt decision by the Trump administration to stop sending information on Covid-19 patients to the C.D.C. and instead to send it to the Department of Health and Human Services reflects this lack of national coordination.

Over the past three weeks, researchers in our initiative, Resolve to Save Lives, searched all the data they could find on publicly available websites from all 50 states. They found it to be shockingly inconsistent, incomplete and inaccessible.

Not a single state published turnaround time for testing, nor how promptly patients are isolated, nor the proportion of cases diagnosed among people who had contact with a Covid-19 patient. In most states, there is no way to track the trend of Black and Hispanic people suffering hospitalizations and deaths at greater rates than white people.

Only two states — Oregon and Virginia — even reported information on whether patients were interviewed promptly for contact tracing. Indicators such as these are essential to know how well we are fighting the virus so that we can do better.

The fault does not lie with the states — it’s a federal failing. Although getting the data quickly and accurately is hard, the underlying problem is the lack of common standards, definitions and accountability. This reflects the absence of national strategy and leadership. Unless we get onto the same page, we will face continued and preventable disorganization, economic decay and death.

There is a better way. Our group — along with a coalition of national, state and academic partners including the American Public Health Association and the Johns Hopkins Center for Health Security — has developed a list of 15 indicators. Every state and county should be able to collect and publish nine of these immediately and the other six within a few weeks.

The basics are early signals from emergency departments that could warn us if cases are spiking; information about cases, tests and deaths over time by age, sex, and race and ethnicity; and information about outbreaks in nursing homes and elsewhere, as well as epidemiological links among cases.

Indicators that could be published in a few weeks include performance measures for testing, case interviews and contact tracing; health care worker infections; and objective assessment of the proportion of people wearing masks correctly in indoor public spaces such as stores and public transit. (This could be monitored by human surveyors or security cameras for aggregate analysis, while protecting individuals’ privacy.)

The greatest benefit of good information isn’t knowledge, it’s action. Among other things, these indicators would give us:

An early-warning system to prevent explosions of cases by scaling back physical connections as soon as cases begin to rise.

More incentive to improve the turnaround time of tests, which is crucial to stop spread (there is little value to tests that come back more than two or three days later).

Information on the size, lethality and status of control of every outbreak, including those in every nursing home, homeless shelter, correctional facility and meatpacking factory.

The opportunity to better understand and reverse the unequal burden the pandemic is placing on Black, Hispanic, Native American and other communities.

Accountability for how many health care workers have been infected each week; if we published this, we would drive that number down toward zero. 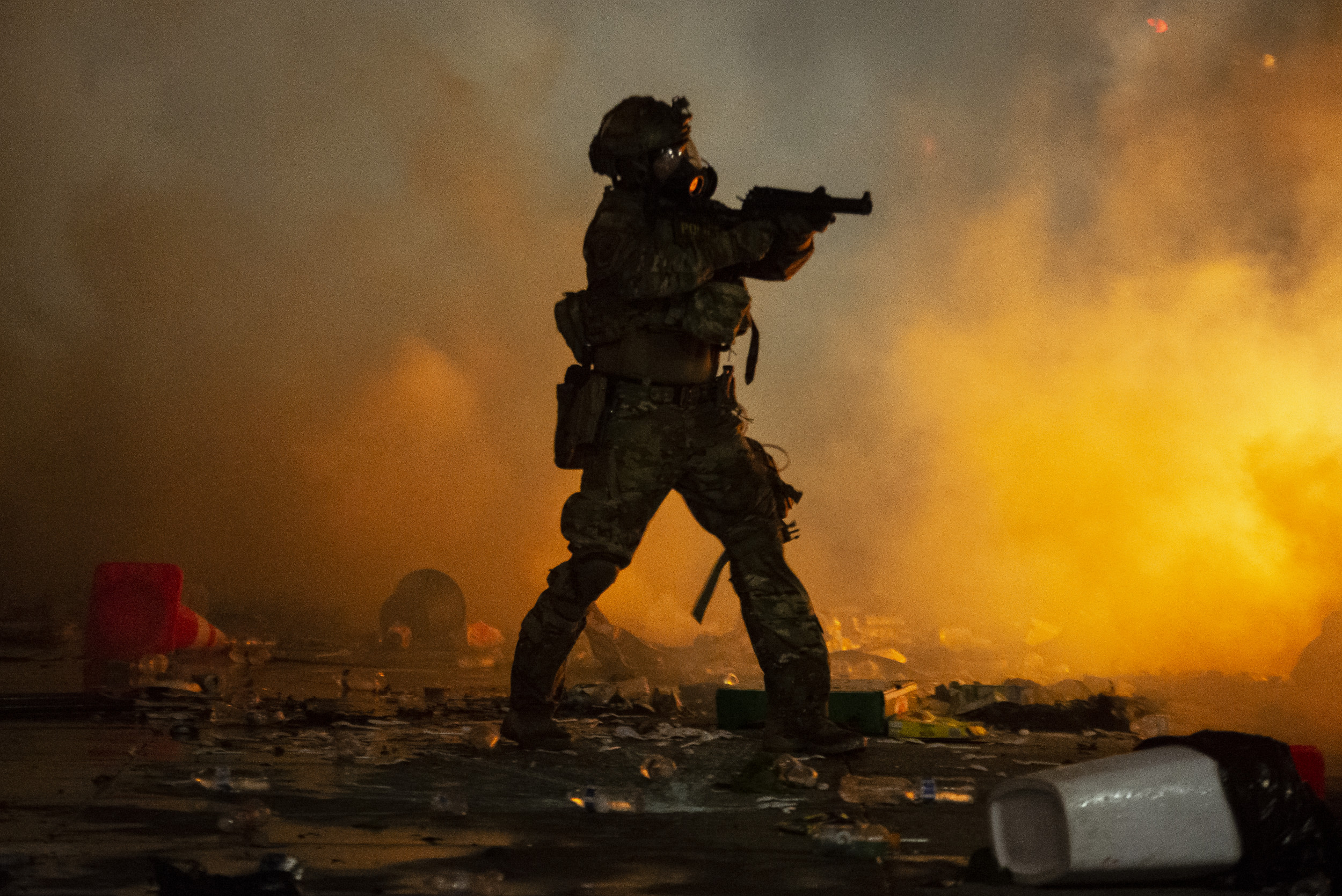 "The Geneva Convention states that destroying medical equipment is a war crime violation. Yet, here we are in Portland," Dr. Eric Feigl-Ding tweeted.

"It appears that federal officers, during dispersal, pepper sprayed the medical supplies in the tents," Olmos wrote. 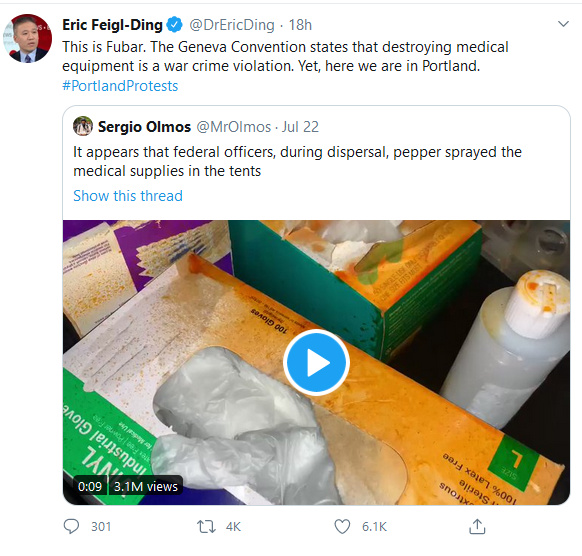 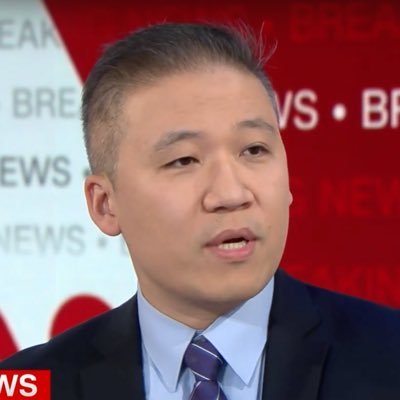 This is Fubar. The Geneva Convention states that destroying medical equipment is a war crime violation. Yet, here we are in Portland. #PortlandProtests https://t.co/AONC6X8lZj

It appears that federal officers, during dispersal, pepper sprayed the medical supplies in the tents pic.twitter.com/Y9HGqzcepB 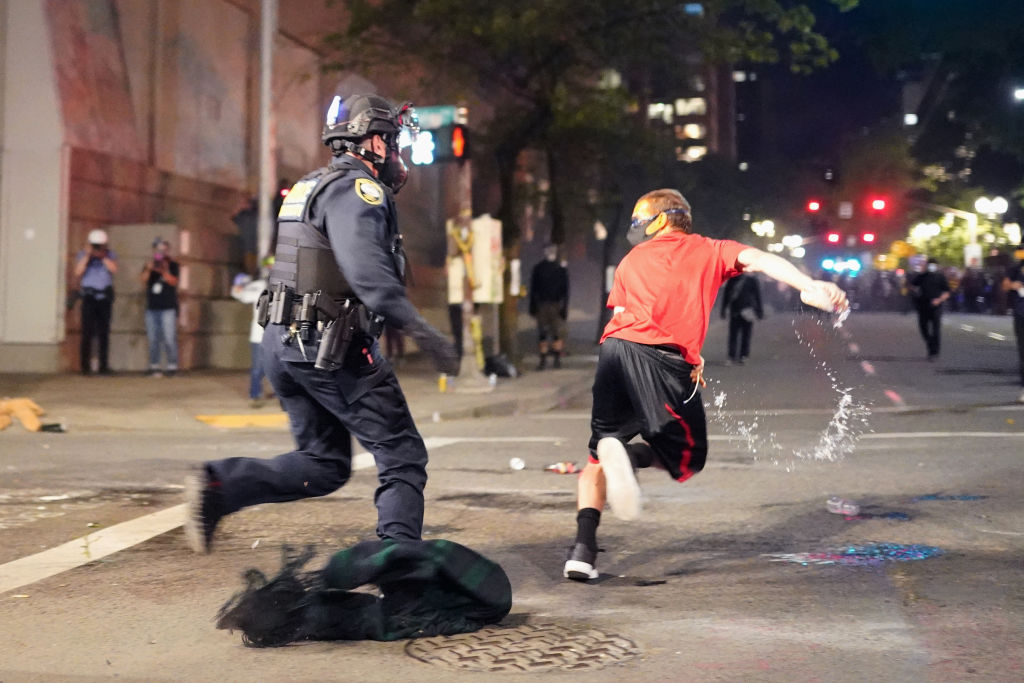 Portland City Council voted unanimously in favor of a resolution blocking the local police bureau from working with federal officers in the city. 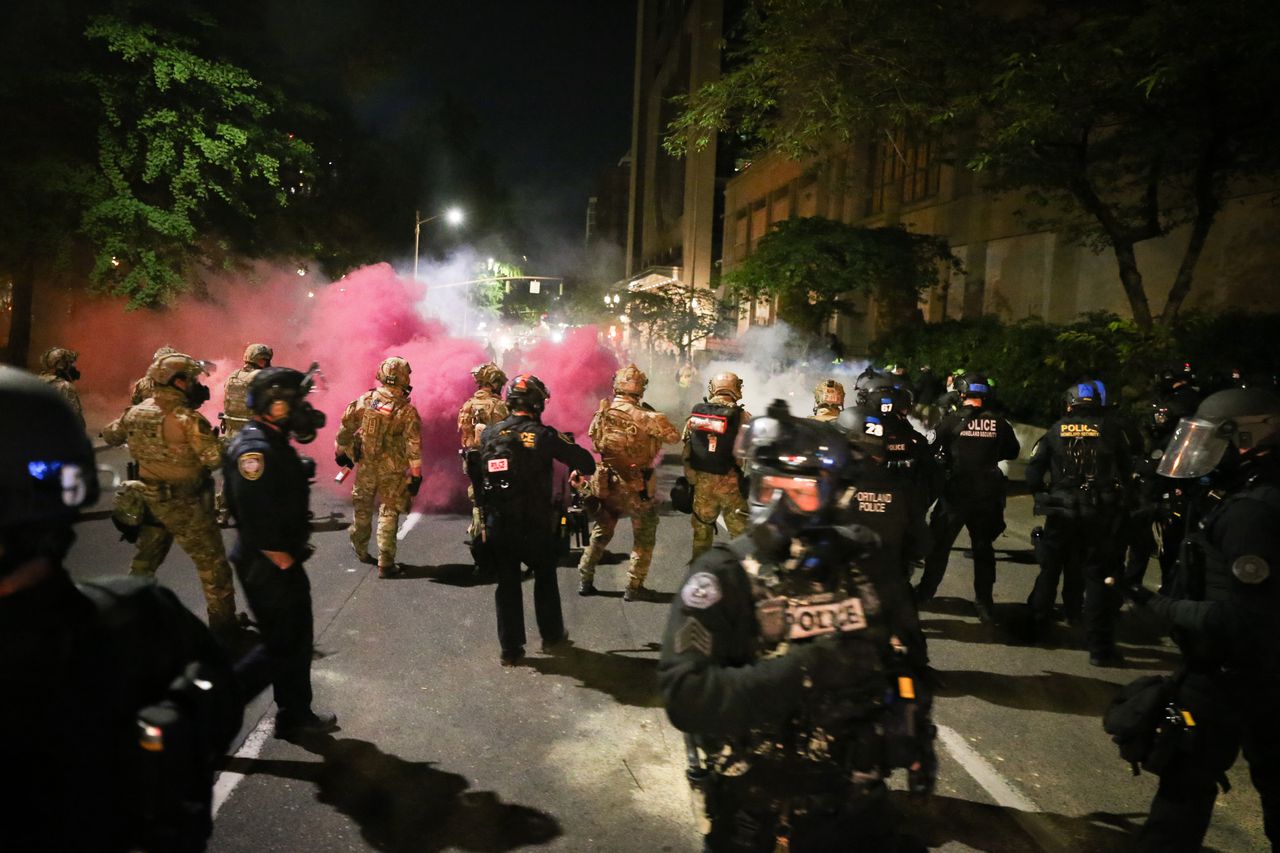 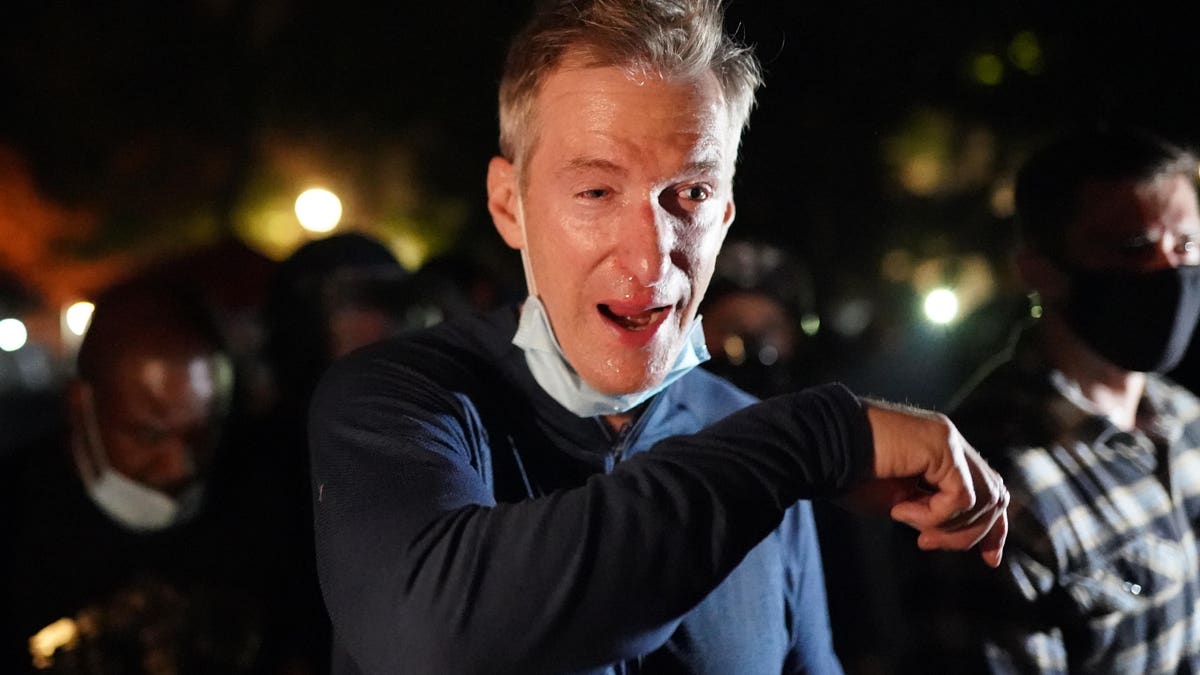