1/ The New York Attorney General’s Office is investigating whether the Trump Organization and Trump inflated his assets in financial documents to secure loans and get tax benefits. In court filings, Letitia James’ office also asked the court to order Eric Trump to provide testimony after he initially agreed to sit for a deposition on July 22, but abruptly canceled an interview under oath. “For months, the Trump Organization has made baseless claims in an effort to shield evidence from a lawful investigation into its financial dealings,” James said. “They have stalled, withheld documents, and instructed witnesses, including Eric Trump, to refuse to answer questions under oath.” The state’s top prosecutor opened the investigation in March 2019, after Michael Cohen told Congress that Trump had inflated his assets in financial statements to secure loans and had understated them to reduce his real estate taxes. The Manhattan district attorney’s office has also recently suggested in court filings that it is investigating possible bank and insurance fraud by Trump and the Trump Organization.(Washington Post / Bloomberg / New York Times / Wall Street Journal / CNN)

A symphony of superlatives played loudly Monday on the opening night of the Republican National Convention, as speaker after speaker lavished praise on President Trump and spoke of him in messianic, almost otherworldly terms.

“A builder.” “A visionary.” “The richest man in the world.” “The guardian of America.” “The bodyguard of Western civilization.”

Political parties typically adopt platforms at their conventions every four years articulating their policy priorities and core beliefs, but not the Republicans in 2020.

If there were still any doubt that Trump had thoroughly appropriated and consumed the Republican Party, it was erased Monday as Republicans kicked off their national convention. The quadrennial showcase of Republicanism began instead this week as a celebration of Trumpism — a nationally televised, high-definition paean to a president known for his outsized ego and taste for the grandiose who is overwhelmingly popular in his own party.

“I pray every night, ‘God, give him some more time. Give him four more years,’ ” said Herschel Walker, a former professional football player. “He has accomplished so much, almost all by himself and under constant attack.”

Andrew Pollack, whose daughter was killed in the 2018 school shooting in Parkland, Fla., gave such a forceful endorsement of Trump that he concluded, “I truly believe the safety of your kids depends on whether this man is reelected.”

Political conventions always spotlight a party’s presidential nominee, especially when the nominee is an incumbent. But the first night of this week’s Republican event was often awash in Trump’s image. It starred his boosters and excluded his foes, and focused squarely on his record as well as his grievances, such as his attacks on the media, and his pet priorities, such as his promotion of hydroxychloroquine as a treatment for the novel coronavirus.

Tim Miller, a Republican operative who worked on Jeb Bush’s 2016 campaign and now helps run the group Republican Voters Against Trump, wrote Monday in a commentary on the Bulwark: “The Republican Party is a cult in service of Donald Trump’s whims and its only stated principle is that the media is mean to them and whatever the Democrats are for is bad.”

Underscoring Trump’s dominance of the Republican Party is the absence of any of the party’s previous presidential nominees. Mitt Romney (2012) is not participating; John McCain (2008) is no longer alive; George W. Bush (2000 and 2004) also is not participating; and although Bob Dole (1996) has expressed support at times for Trump, he has not been announced as part of the program.

The convention got underway as a number of Republicans have come out against Trump. On Monday morning, Democratic nominee Joe Biden’s campaign announced the endorsements of more than two dozen former GOP lawmakers, including former senator Jeff Flake (R-Ariz.).

Meanwhile, Miles Taylor, a former top official in Trump’s Department of Homeland Security, launched a new group called Repair 45, through which current and former administration officials would work to defeat the president and publish commentaries about him. Taylor said in a brief interview that he had at least two current administration officials helping his effort, along with a range of former officials.

The quasi-virtual convention is itself a Trump production. The president is set to appear on each of four straight nights of prime-time programming, concluding with his formal acceptance speech Thursday evening from the South Lawn of the White House. Each night also will feature a keynote address by at least one member of the Trump family, starting with eldest son Donald Trump Jr. on Monday night.

Meanwhile, one of the command centers where Republican officials worked to orchestrate the television production was set up at the Trump International Hotel in Washington.

Trump, a former reality TV producer, has taken a personal interest in convention programming. Two people familiar with the planning said Trump wanted a large crowd for his Thursday night address despite the raging pandemic, so there will probably be 1,000 people or so on the South Lawn.

Organizers have sought to have surprise appearances, and Trump also has asked for particular speakers to be invited, including a number of White House staffers. Those scheduled to appear include Kellyanne Conway, his 2016 campaign manager who announced Sunday night she was leaving her role as senior counselor to the president to focus on her family, and Dan Scavino, his longtime social media aide who now serves as deputy chief of staff.

Trump also asked to include Kim Klacik, a long-shot congressional candidate in Baltimore who has made viral videos supporting Trump and Republicans, according to Republicans involved in the planning. Klacik, who is Black, used her appearance Monday night to try to validate Trump’s arguments about crime and decay in Democratic-controlled cities.

“I’m asking you to help President Trump complete the great American comeback, and I’m asking you to help me make Baltimore great again,” Klacik said. “Because even though it’s going to make Democrat politicians furious to hear this from this un-bossed woman, I’m just going to say it like it is: Donald Trump is, hands down, the best president of my lifetime.”

Republican operatives said there is a risk inherent in their party centering the convention so completely on Trump. Doing so invites voters to frame the election as a referendum on the president, whereas party officials believe Trump has a better chance of winning a second term if he can shift some attention to Biden and make the election a choice. Some of the speakers made aggressive cases against Biden, including the president’s son, Sen. Tim Scott (R-S.C.) and former U.N. ambassador Nikki Haley, and painted the country under his leadership as dangerous and dystopian.

“This is an angry country right now,” GOP strategist Alex Castellanos said. “Everybody’s angry at everybody. So whoever sticks their head out of the foxhole and puts themselves in the spotlight, guess what the country’s going to do? Hate them.”

Political conventions traditionally host impassioned — and sometimes acrimonious — debates over policy platforms. At past GOP conventions, disagreements centered on social issues such as same-sex marriage, as well as on foreign policy.

This year, with the convention scaled back because of the pandemic, RNC officials decided to eschew a standard platform and instead simply released a nonbinding statement saying the party supports Trump.

Republican officials say there were disputes among Trump’s advisers, including Jared Kushner, the president’s son-in-law, who wanted a short platform that delineated the president’s thoughts on a few key issues. There were other discussions over how to handle gay rights in the platform, aides said, and how much the platform should get into foreign policy.

“At the end of the day, we avoided all that, thankfully,” said one Trump adviser, who spoke on the condition of anonymity to be candid.

Lanhee Chen, a fellow at the Hoover Institution at Stanford University who worked on the GOP convention platform for Bush in 2004 and Romney in 2012, said, “The platform is a reflection of what the party stands for and will stand for for the next four years.”

This year, he added, Republicans decided “they want voters to evaluate Trump based on his record and based on his personality and who he is.”

Some of the president’s advisers, including Conway, urged convention planners to incorporate more “real-life American stories,” according to one senior administration official, citing the perceived success of such moments at Trump’s State of the Union speeches.

Amy Ford, a registered nurse who helped treat patients with covid-19, the disease caused by the coronavirus, credited Trump with saving thousands of lives.

“Let me be clear so that the media cannot twist my personal story to fit their narrative: As a health-care professional, I can tell you without hesitation, Donald Trump’s quick action and leadership saved thousands of lives during covid-19,” Ford said.

Some of the speakers — including Charlie Kirk, who opened the convention, and Rep. Matt Gaetz (R-Fla.) — have become Republican celebrities of sorts in the Trump era for their vociferous defenses of the president.

“We may not have realized it at the time, but this fact is now clear: Trump is the bodyguard of western civilization,” said Kirk, the head of Turning Point USA, a pro-Trump student organization.

Other speakers were likely to have deep appeal to loyal viewers of Fox News Channel and other members of Trump’s base, including Mark and Patty McCloskey, the St. Louis couple who pointed guns at Black Lives Matter demonstrators passing by their house.

Kimberly Guilfoyle, a former Fox personality who works on the Trump campaign and is the girlfriend of Donald Trump Jr., gave a fiery address in which she excoriated “rioters” and “human, sex, drug traffickers” across America. She cast her boyfriend’s father as the nation’s savior.

“President Trump believes in you,” Guilfoyle said. “He emancipates and lifts you up to live your American Dream.” 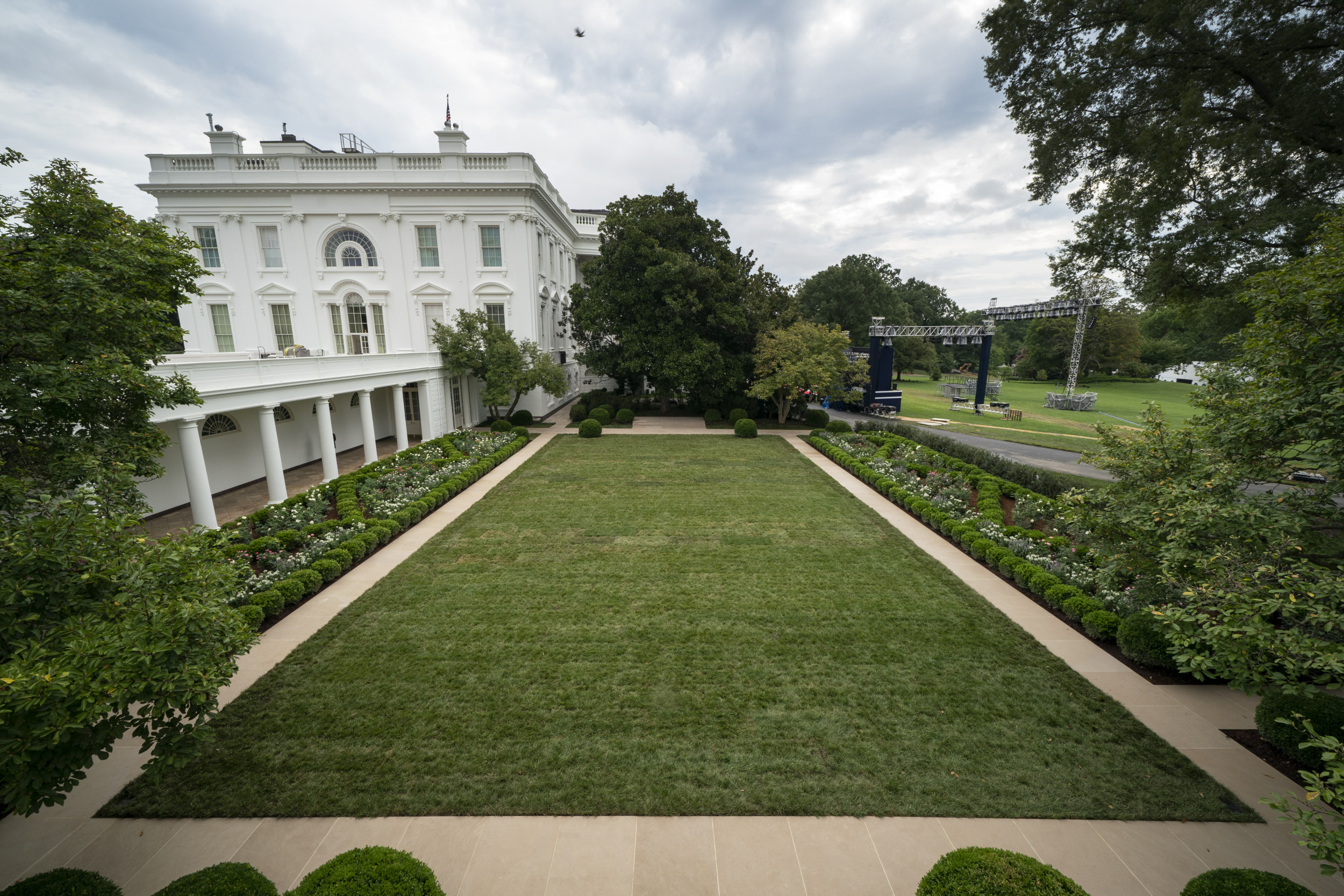 The first lady released photos of the White House garden's completed refurbishment on Saturday. Many took issue with its sparing design.

“Can we talk about how Jackie Kennedy’s Rose Garden was colorful and diverse and beautiful and Melania just made it… white?”

Trump’s legacy in a nutshell.

I can’t help but notice that this is driven, as usual, not by doing the right thing but by privilege. Don Jr.'s only issue with this mine plundering Alaskan wilderness is that it might interfere with HIM personally plundering it instead. 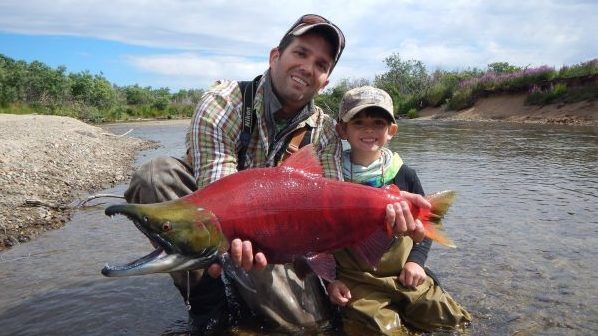 The Trump administration had been moving ahead with the controversial Pebble Mine. That appears to have changed after public opposition from some key Republicans worried about a salmon fishery.

“Can we talk about how Jackie Kennedy’s Rose Garden was colorful and diverse and beautiful and Melania just made it… white?”

Meh. Funny joke but, I actually think it’s an improvement. Not a fan of crabapple trees, too weedy looking for my taste. I’d rather see the colonnade beyond. The tulips only bloom in spring so they wouldn’t be out in August. It’s not a fair before and after, any garden would look bare in August compared to April.

There are bigger things to be outraged about than some old crabapple trees that Jackie once had planted. What’s really upsetting and no one really talks about is the fact that this project went forward during an out of control pandemic or that the intended purpose wasn’t just to fix up the garden but to host a campaign event. It’s all a violation of our campaign laws and people are mad about the tulips?

Oh, I know it’s a small thing in the scheme of things… on the other hand, there is a point to this: doing this in the middle of a pandemic, when that money could go to so many more vital causes, is so tone deaf.