1/ Federal prosecutors said there was “strong evidence” the pro-Trump mob that stormed the U.S. Capitol planned to “capture and assassinate elected officials.” Hours later, however, the head of the investigation cautioned that the probe is still in its early stages and there was “no direct evidence of kill and capture teams.” The accusation came in an 18-page motion filed Thursday as part of the federal criminal case against Jacob Anthony Chansley, a well-known conspiracy theorist who was photographed shirtless, but wearing a fury hat with horns during the insurrection. “Strong evidence, including Chansley’s own words and actions at the Capitol, supports that the intent of the Capitol rioters was to capture and assassinate elected officials in the United States Government,” prosecutors wrote in their memo urging the judge to keep Chansley behind bars. Chansley also wrote a note for Pence in the Senate chamber, which read: “It’s only a matter of time, justice is coming.” (Associated Press / USA Today / NBC News / New York Times / Reuters)

UPDATE: In an internal memo obtained by popular.info, @Pfizer says it will not donate "to any of the 147 Members of Congress who voted against certifying the Electoral College results" for at least 6 months popular.info/p/three-major-… https://t.co/RmGvjtYIk7 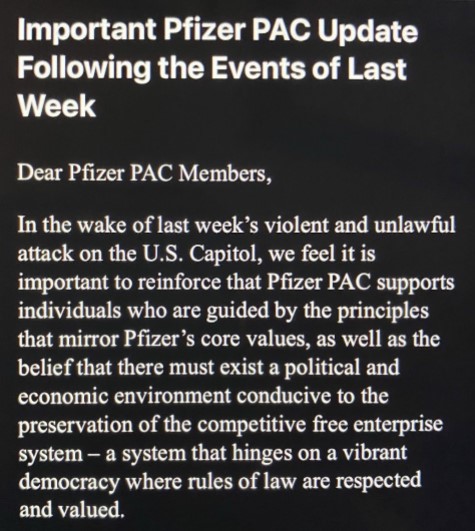 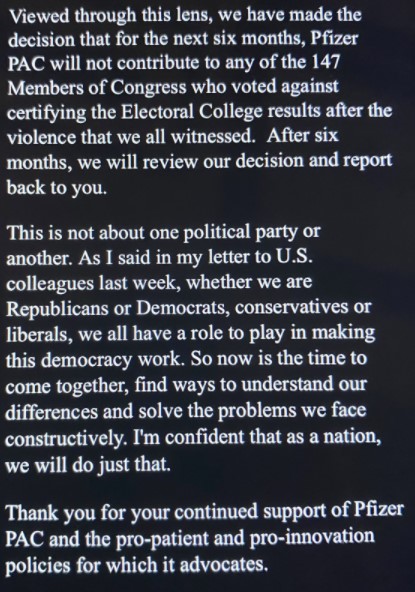