1/ Trump's hardball tactics backfired as the Senate rejected its slimmed-down Obamacare repeal with Collins, Murkowski, McCain all voting no. The bill would have left 16 million more people uninsured by 2026 than Obamacare. Earlier in the week, Susan Collins and Lisa Murkowski voted against the motion to proceed, causing Trump to attack Murkowski on Twitter, saying she "really let the Republicans, and our country, down." Then, before yesterday's vote, Trump had Interior Secretary Ryan Zinke call Murkowski and Alaska's other Republican senator, threatening that the administration may change its position on issues that affect the state in order to punish Murkowski. She didn't budge. Shortly after the vote failed 49-to-51, Trump took to Twitter: "3 Republicans and 48 Democrats let the American people down. As I said from the beginning, let ObamaCare implode, then deal. Watch!" (Washington Post / New York Times / Bloomberg)

As I’ve been using http://dashboard.securingdemocracy.org/, I was curious of what caused this huge spike on 7/28 in Russian propaganda tweets – needless to say, looking at Day 190’s post it’s pretty obvious why! 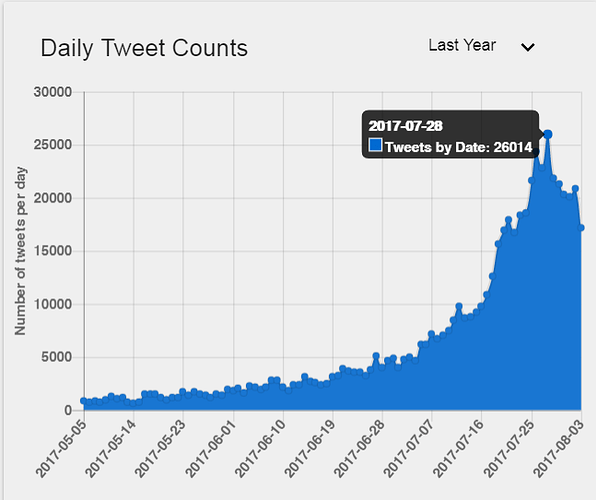