1/ Mitch McConnell demanded that Biden pressure congressional Democratic leaders into raising the debt ceiling unilaterally because Republicans will not support the effort to lift the borrowing limit. McConnell wants Democrats to use budget reconciliation to lift the debt ceiling with only 50 votes instead of the normal 60-vote threshold – the same process Democrats are using to advance Biden’s $3.5 trillion social spending package. “Since mid-July, Republicans have clearly stated that Democrats will need to raise the debt limit on their own,” McConnell wrote in a letter to Biden. “We have simply warned that since your party wishes to govern alone, it must handle the debt limit alone as well.” Treasury Secretary Janet Yellen previously said the government will run out of cash in about two weeks, which could cause a catastrophic debt default. Budget experts, however, say the reconciliation process would take at least two weeks to complete. (Bloomberg / Politico)

After the Facebook whistleblower testimony yesterday, this was introduces. Read thread.

The Platform Accountability and Consumer Transparency Act (PACT) was introduced by me, @SenJohnThune, @SenatorBaldwin, @SenJohnBarrasso, @benraylujan, and @BillCassidy is the most bipartisan section 230 reform in this congress. What does it do? 1/X 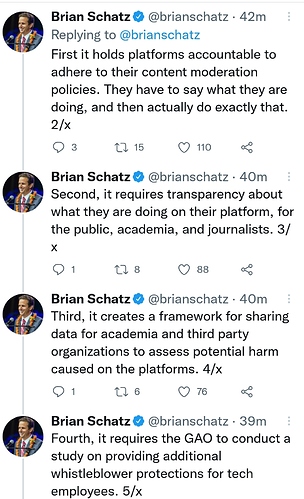