1/ Trump will cutoff essential subsidy payments to Affordable Care Act insurers. The subsidies are used to pay out-of-pocket costs of low-income people and represent an estimated $7 billion this year. A White House statement directed Congress to "repeal and replace the disastrous Obamacare law and provide real relief to the American people" because "the government cannot lawfully make the cost-sharing reduction payments." Trump called the ACA an "imploding," "broken mess" in a pair of tweets. Chuck Schumer and Nancy Pelosi responded, saying Trump had “apparently decided to punish the American people for his inability to improve our health care system.” Nearly 6 million enrollees qualify for the cost-sharing payments this year. (Politico / New York Times / CNN)

It just occurred to me that “climate change skeptic” is an unfair term. They’re not skeptical in the sense that they want to see more evidence, they’re refusing the presented evidence because… um… unsubstantiated claims about… china?

quotables/ A selection of quotes from Trump’s speech at the Values Voter Summit: 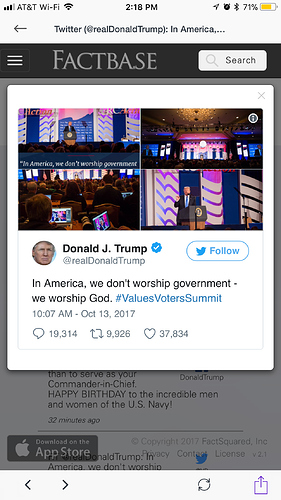 He’s tweeted something like this before and every time I just want to scream WE HAVE SEPARATION OF CHURCH AND STATE FOR A REASON, YOU FUCKING IDIOT.

Jared Kushner is the perfect example of privilege buying him an Ivy League education - that gut is not the sharpest tack in the box. Sheesh!!

It’s self-serving nihilism rather than any kind of genuine skepticism I think.

this is a little too in the weeds, but for what it’s worth, i think her stance is more skepticism of the science than an outright denial. at least that’s how i interpret it.

The AP Stylebook generally uses “doubter” if people think “denier” is too contentious or if not literally a case of psychological denial.

The AP Stylebook editors today informed AP staff about a change to the entry on global warming. In addition, they described what goes into keeping the...

Another option would be “pseudoskeptic”.

Pseudoskepticism (or pseudoscepticism) is a philosophical or scientific position that appears to be that of skepticism or scientific skepticism but in reality fails to be. An early use of the word was in self-denigration: on 31 August 1869, Swiss philosopher Henri-Frédéric Amiel wrote in his diary: My instinct is in harmony with the pessimism of Buddha and of Schopenhauer. It is a doubt which never leaves me, even in my moments of religious fervor. Nature is indeed for me a Maïa; and I look at ...

For the sake of discussion, I think “doubter” (as opposed to “denier”) implies making an honest effort to appraise and discern the “truth” without a predetermined conclusion in order to reconcile conflicting evidence through systematic objective testing. Scientific skepticism goes beyond just disbelief or simply disagreeing with someone’s assertions.

In the political realm, the term “skeptic” is frequently hijacked to sow manufactured doubt or lend credence to one’s position (an appeal to skepticism or an argument from ignorance).

Sometimes it’s challenging to figure out if someone is intellectually dishonest and manipulative or genuinely ignorant but not devious.

In this case, I’d contend she’s being disingenuous and misleading, not skeptical. CO2 serves a purpose, sure, but is harmful in excess quantities. CO2 also meets the legal and encyclopedic definitions of a pollutant.

In the United States, CO2 is the primary greenhouse gas generated by human activity (>80% of all emissions), and the vast majority of that is due to burning fossil fuels.

(Water vapor is more abundant than CO2 but is not a cause or primary driver of global warming, and other greenhouse gases can be more “potent” but exist in much smaller quantities relative to CO2.)

These well-established facts negate the main premises of her claims on fossil fuels in relation to climate change, and she does not appear to be seeking a “greater truth”.

A legitimate “moral case” for fossil fuels would be in the setting of third-world countries where standard of living and resources are low. They cannot afford or transition to newer technologies and would really struggle otherwise. (However, Texas oil companies have no or minimal bearing on that issue unless they’re the primary exporters to a particular energy-starved region.)

An example of a climate change denier is Trump’s nominee to lead NASA, recently denounced by climatologists at the Union of Concerned Scientists.