1/ Mitch McConnell and Trump met for lunch today after Steve Bannon called for a "season of war" against the Senate majority leader and the rest of the GOP establishment. Bannon compared McConnell to Julius Caesar and vowed to challenge any Senate Republican who doesn’t publicly condemn attacks on Trump. “Yeah, Mitch, the donors are not happy. They’ve all left you. We’ve cut your oxygen off,” Bannon said. (Politico / The Guardian / CNN)

5/ Trump once joked that Pence “wants to hang” all gay people. The comment came after a legal scholar told the two that if the Supreme Court overturned Roe v. Wade, many states would legalize on their own. “You see? You’ve wasted all this time and energy on it, and it’s not going to end abortion anyway,” Trump said. When the conversation turned to gay rights, Trump motioned toward Pence and said, “Don’t ask that guy—he wants to hang them all!” (The New Yorker)

The New Yorker piece is down right terrifying! A must read for sure!

Was a bit surprised to not see anything about 45’s speech at an LGBT hate group. This man and his cronies make me so sick. The event hosts a coalition of white supremacists, far right activists and religious extremists among its attendees.

That was a few days ago. Is the Values Voter Summit a hate group or are they just anti-gay? I don’t know enough about them to know and it seems only partisan media refers to them in strong terms.

The Southern Poverty Law Center has designated some of the organizations running the Values Voter Summit as hate groups based on analogous qualifiers used by the FBI.

SPLC has had some listings challenged in the past, but the identifying criteria they use seems reasonable. In disputed cases, quotes and official statements made by the offending groups often speak for themselves. 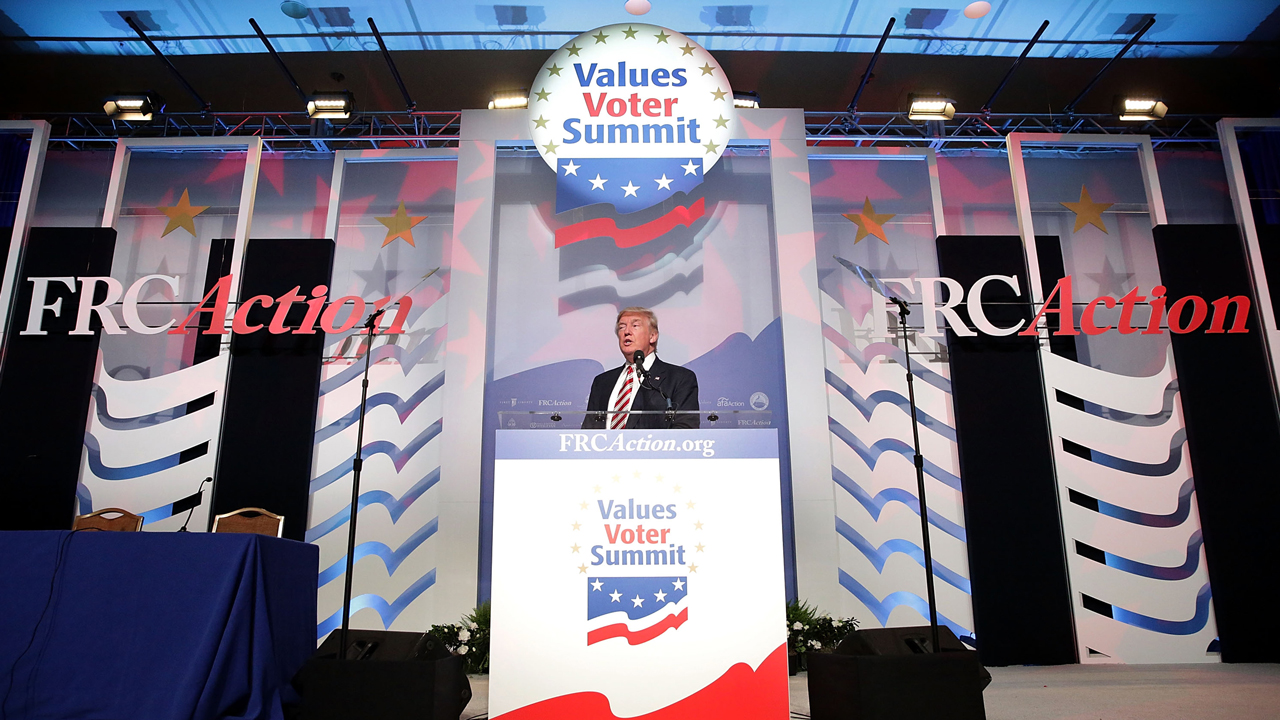 Key leaders in the established anti-LGBT and anti-Muslim movements will gather this weekend in Washington, D.C., for the annual Values Voter Summit (VVS), along with President Donald Trump and his former strategist and Breitbart executive Stephen...

While Values Voter groups may not have committed violence or hate crimes, some offshoot groups arguably skirt close to the definition of “hate group” as described by the FBI’s Hate Crime Data Collection Guidelines and Training Manual:

An organization whose primary purpose is to promote animosity, hostility, and malice against persons of or with a race, religion, disability, sexual orientation, ethnicity, gender, or gender identity which differs from that of the members or the organization, e.g., the Ku Klux Klan, American Nazi Party.

In the least, several of the groups hold very extreme “traditionalist” views & push conspiracy theories that demonize or dehumanize entire demographics based on a single characteristic that violates “biblical law”. These views aren’t fringe nor only held by a few members—they’re held by leadership as core ideology.

For example, their Presidents, VPs, Chairmen, Senior Fellows, etc. have stated & believe the entire religion of Islam is evil, shouldn’t be protected by the 1st Amendment, and is a threat to democracy. Others have threatened physical violence against transgender people who use men’s or women’s bathrooms. Some advocate for not just denying LGBTQ persons equality/rights, but also favor criminalizing “homosexual behavior” or favor deporting them because “homosexuality is destructive to society”.

One of the groups’ Presidents, Tony Perkins, has called pedophilia a “homosexual problem” and falsely asserts gay men are more likely to molest children.

The summit also distributed a flyer advertising a book called The Health Hazards of Homosexuality, which promotes homophobia by spinning or distorting public health info. A flier promoting a book on the "health hazards of homosexuality" was distributed to guests at Values Voter Summit where President Trump spoke.

[The book] also claims homosexuality is a mental disorder and the truth is being suppressed by “the homosexual lobby and their allies,” including the “radicalized” entertainment industry, press and educational establishments.

Semantics matter, but personally I think they’ve extended beyond simple anti-gay sentiments of “I don’t like gay sex” and ratcheted up the animosity to “we should jail or remove these people from our communities”.

Thanks. Like I said, I don’t know enough about the group to call them a hate group. Never heard of them before this week, either.

Thanks, John for the extra info! I’m even more surprised that it hasn’t made it into the news, but I suppose there is so much more going on that things like this, while still so shocking, still don’t make the daily Terrible Top 10 Trump stories for news outlets.

Agreed! Who wants a Koch brothers puppet as a president? Sadly it still looks better than 45.

Ah, of course, I should have said I was surprised I didn’t see it in Friday’s. I was hoping that with your skills you had found something more about the event than in the partisan media, but even if they are just anti-gay and not technically a “hate group” it is still very depressing to me.