1/ Officials in charge of Capitol security on Jan. 6 blamed “intelligence failures” by the federal government for the “coordinated, military-style” attack on Congress that threatened the peaceful transfer of power. Testifying before a joint bipartisan committee of senators, former Capitol Police chief Steven Sund said he never saw a Jan. 5 FBI report warning that extremists were preparing to travel to Washington to commit violence and wage “war” on Jan. 6. “A clear lack of accurate and complete intelligence across several federal agencies contributed to this event, and not poor planning by the United States Capitol Police,” Sund said. “But none of the intelligence we received predicted what actually occurred.” Former House Sergeant-at-Arms Paul Irving said that while they were informed that Congress would be a target and some protesters could be armed, “the intelligence was not that there would be a coordinated assault on the Capitol, nor was that contemplated in any of the inter-agency discussions that I attended in the days before the attack.” Acting D.C. police chief Robert Contee added that he and Sund called the National Guard for help after the mob stormed the building, but a top Pentagon official said he would recommend against deploying the National Guard for fear of the “optics” of armed troops in front of the Capitol. (NBC News / Politico / New York Times / Washington Post / Bloomberg / CNN / USA Today / BuzzFeed News / ABC News / Wall Street Journal)

In a twist that must be terribly confusing for the #QAnonsense crowd, Tucker Carlson just told them they don’t exist after he spent 10 minutes trolling about the internet before going back to Bing to research this “disinformation” he just discovered.

Tucker Carlson says he couldn't find any evidence that the Qanon conspiracy theory even exists, like theres nothing out there proving that it's a thing https://t.co/tqeYm73pAb 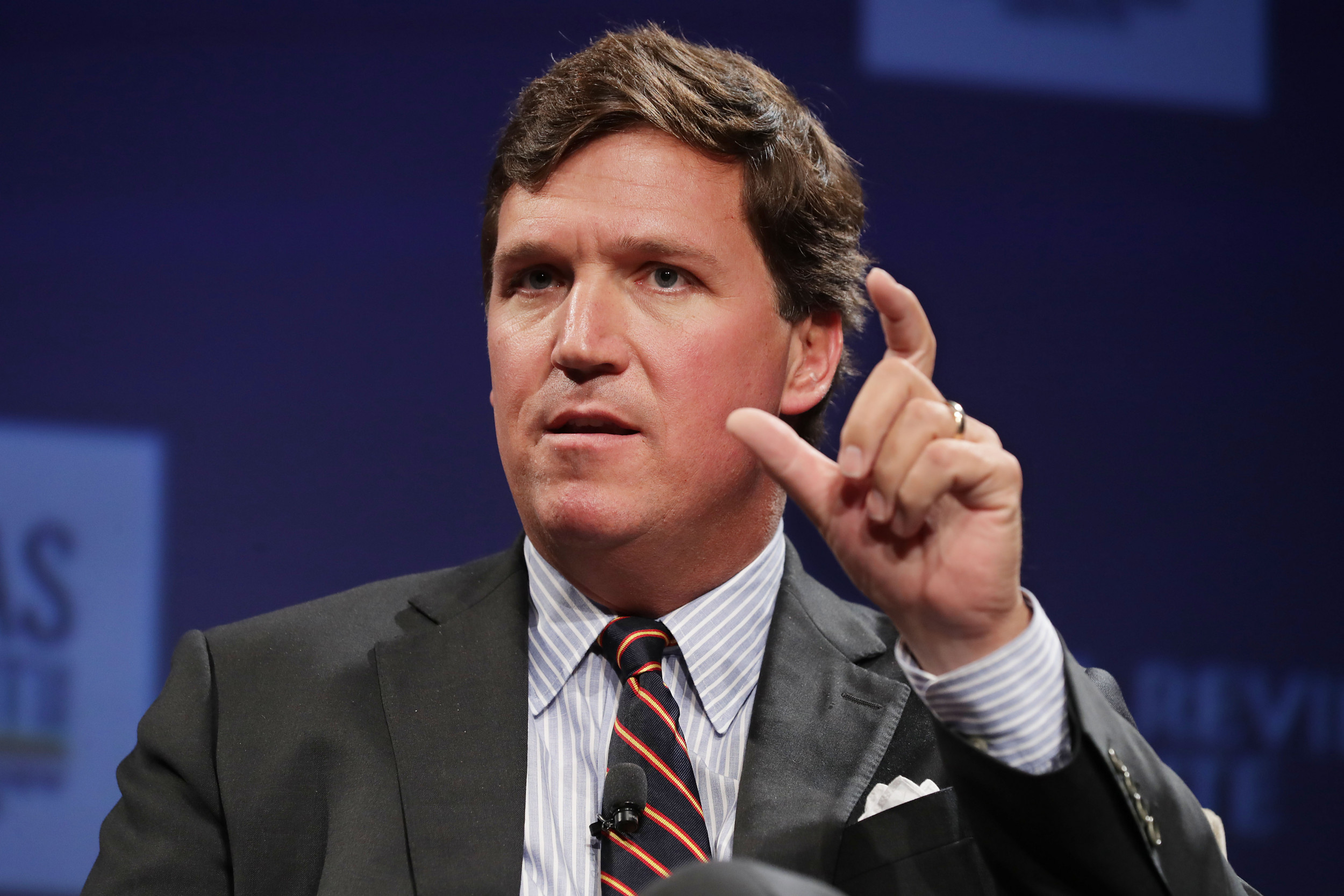 The reactionary Fox News host has said there was no white supremacy during the violence on January 6 despite an officer saying police were beaten with Confederate flags while protecting the Capitol. Analysis | Tucker Carlson’s ‘we could not find’ QAnon comment was worse than...

The Fox News host made waves in appearing to deny the reality of QAnon. But what he actually did was more nefarious.

The clip that quickly traveled across social media was bizarre, as is often the case with clips that travel quickly across social media. Here was Tucker Carlson, the brightest star in Fox News’s prime-time opinion lineup, seemingly denying that QAnon exists.

“So it’s worth finding out where the public is getting all this false information — this ‘disinformation,’ as we’ll call it,” Carlson says in the clip from his show on Tuesday night. “So we checked. We spent all day trying to locate the famous QAnon, which in the end we learned is not even a website. If it’s out there, we could not find it.”

Stripped of context, it’s a nonsensical claim. There is probably not any actual individual who is “Q,” the anonymous source of various random allegations and cryptic comments that serve as the basis of the quasi-religious conspiracy theory QAnon. But there’s no question that the QAnon movement exists, that those edicts exist and that the effect has been poisonous to the American political conversation. “QAnon” isn’t a website, but the conspiracy theory is centered around online content and online communities.

Fox News maintains that Carlson wasn’t literally looking for QAnon but was, instead, saying that CNN and others in the media do more damage than QAnon — a far more toxic and ridiculous claim.

Carlson was making a joke about how the “disinformation” that the mainstream media laments doesn’t have a centralized source, while the media’s own disinformation does. But the root of the joke was deeply ironic, given that it sat squarely in a sweeping effort by Carlson to offer disinformation about one of his favorite targets of scorn: concern about systemic racism in the United States.

In broad strokes, Carlson’s argument was one that itself could have come from a fervent QAnon adherent.

“Freelance thinking is what they hate most; it’s a threat to their monopoly,” he said of the media. “They can’t say that out loud, so instead they call it ‘disinformation.’ ” He asked viewers to imagine working as a mechanic when GM produced a car that can be easily repaired at home.

“You’d be upset,” he said. “That’s how CNN feels about the Internet. It’s exposing their scam. Naturally, they’re a little irrational about it.”

I’ve spoken to a number of QAnon adherents at Trump rallies, and this is their same line: They are doing their own research online and are no longer constrained by media gatekeepers. Of course, one role played by media gatekeepers is to point out and uproot the nonsense that has grown like weeds in the unfiltered Q universe.

The media will say that something you really want to believe isn’t true. Ignore the media and engage in a little “freelance thinking,” and you can believe it to be true to your heart’s content. This isn’t to say that the media should dictate what you believe, of course, but it does at least serve as something of an anchor to reality. QAnon adherents, however, often like to drift free.

Carlson endorses this idea that CNN and the Democratic Party are purveyors of disinformation who should be ignored for the same reason that Q makes the case: It builds loyalty to him and his politics. Chief among Carlson’s political beliefs is that concern about racial bias and white nationalism in the United States is either overblown or a point of leverage for attacking him and people like him. This was the focus of his effort to prove that CNN et al. have engaged in disinformation.

He cited a report in which self-identified liberals were more likely to significantly overstate the number of Black Americans killed by police or to overestimate how many Black Americans were killed by police relative to other racial groups. This was to Carlson an example of how disinformation — here, apparently about the nature of police shootings — can “hurt people” since, among other things, it “makes people stupid.”

So he went looking for the source of this “disinformation.” His riff:

“Public policy can change dramatically on the basis of things people think they know but don’t actually know, and we have seen that, a lot. Entire police departments got defunded. So it’s worth finding out where the public is getting all this false information — this ‘disinformation,’ as we’ll call it.”

"So we checked. We spent all day trying to locate the famous QAnon, which in the end we learned is not even a website. If it’s out there, we could not find it. Then we checked Marjorie Taylor Greene’s Twitter feed because we have heard she traffics in misinformation, CNN told us. But nothing there. Next we called our many friends in the tightknit ‘intel community.’ Could Vladimir Putin be putting this stuff out there? The Proud Boys? Alex Jones? Who is lying to America in ways that are certain to make us hate each other and certain to destroy our core institutions? "

“Well, none of the above, actually. It wasn’t Marjorie Taylor Greene. It was cable news. It was politicians talking on TV. They’re the ones spreading disinformation to Americans. Maybe they’re from QAnon.”

It’s an impressive feat as a cable-news host to make a lengthy joke about how cable news is a key source of disinformation and to apparently unwittingly splice into that joke at least two bits of your own disinformation. For example, Carlson asks who is “lying to America in ways that are certain to make us hate each other” shortly after “joking” that maybe Russian President Vladimir Putin is behind disinformation. Of course, Russia was demonstrably behind a years-long effort specifically focused on trying to make Americans hate each other, an effort manifested in social media posts meant to exacerbate existing societal tensions. Russia did almost exactly what Carlson is trying to laugh off as ludicrous. (And don’t even get us started on conspiracy-theory king Alex Jones.)

Carlson also suggests that “disinformation” like that (rather dubious) report about police killings led to “entire police departments being defunded.” That’s not true. Some cities cut some police funding after last summer’s protests. Most didn’t. Minneapolis, the epicenter of those protests, explored disbanding its department but decided not to. The mayor of Ithaca, N.Y., this week proposed replacing the police department with a different agency, but that hasn’t been implemented — if it even meets Carlson’s description.

Again, this subject is Carlson’s dogged focus. He’s desperate to cast issues of race as non-issues. To that end, the “defund” line was minor compared to where he took his complaints next.

The disinformation, he said, was “cable news” and “politicians talking on TV,” a point he reinforced by showing clips meant to prove his point.

One clip showed Sen. Cory Booker (D-N.J.) talking about Black people being killed by police. The next showed then-Sen. Kamala D. Harris (D-Calif.) talking about training police on issues of race. The segment ended with then-candidate Joe Biden talking about not needing to warn his children about how to behave around police.

“So not only are huge numbers of unarmed African Americans murdered every year because of their race,” Carlson said, after the clips played. “To deny that or question that fact is to effectively participate in those killings yourself. Denying this is denying them life, as Kamala Harris put it.”

This is just garbage. The quote from Harris (which Carlson likes enough to have played it multiple times in the past) had her saying that there should be “training for police officers on implicit racial bias and procedural justice. Because to deny it exists is to deny folks liberty, and, in many cases, life.”

She did not say that “huge numbers of unarmed African Americans” are “murdered every year because of their race” and that to “question that fact is to effectively participate in those killings yourself.” She said that police should be trained to recognize the ways in which implicit — that is, non-obvious — bias can lead to false incarcerations or fatal encounters with law enforcement.

As Fox News’s own lawyers said in response to a defamation lawsuit Carlson faced last year, Carlson himself is not such a reliable source. Viewers, they said, “arrive with an appropriate amount of skepticism” about Carlson’s claims because they understand that he is exaggerating and engaged in “non-literal commentary.”