1/ The Trump administration will let states require people to work for Medicaid. Under the new guidance, states can now require Medicaid beneficiaries to work, volunteer or participate in job training. The elderly, disabled, pregnant women, and children are excluded. It's the first time in the fifty-year history of the program that Medicaid recipients will be required to hold down a job in order to receive benefits. (Washington Post / New York Times / NPR)

2/ The House reauthorized the Foreign Intelligence Surveillance Act, which allows the US intelligence community to collect Americans’ email, text messages, photos, and other electronic communication without a warrant. The legislation, which passed 256 to 164, renews the program for six years and will now head to the Senate. (New York Times)

“His administration’s position has been really clear from Day 1, which is: 702 is really important, it’s got to be renewed,” Mr. Ryan told reporters after the vote.

Really Paul Ryan? His administration’s position has been really clear on this policy? That’s nonsense, Trump doesn’t seem to understand what this bill does or why he should or should not support it. Ludicrous! 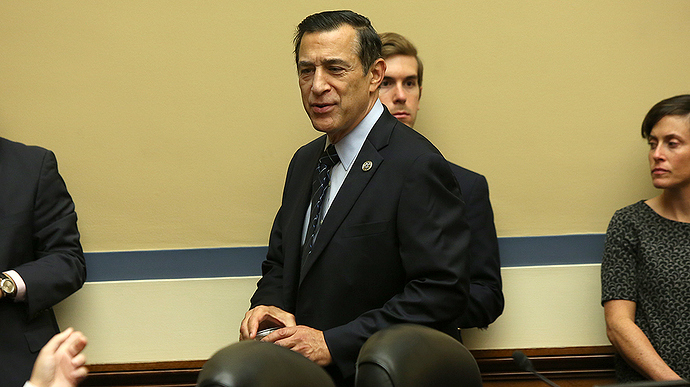 In his statement, Issa never specifically said he was retiring from Congress.

I nearly did a literal head/desk when this breaking news alert popped up. The president’s comments on immigrants from El Salvador, Haiti and other nations surprised lawmakers.

Lets a and Amy:
I hear you and believe me-I know trying to move some representatives is hard. Luckily, you have an opportunity to stop Trump dead in his tracks-they are called the November Congressional Elrctions. If your reps won’t listen-vote them out. Change the make-up of congress and Trump is silenced until 2020. While I cannot understand Trump base in the South (and believe me I know and have seen their thinking on a recent 5week trip there) it seems they see the dying views of old white guys in Trump because the base is racist and scared.
As for me, I wrote to our PM about two weeks ago, as di many others, and demanded he vote against the UN resolution on Jerusalem. He decided to ‘abstain’. I wrote back and told him that he had lost my vote in the future. Same with NAFTA- Trump keeps the ‘carrot on the stick’ approach with Canada and Mexico. I’ve asked the PM to tell Trump to “shove it”. NAFTA will hurt Americans and Canadians-but Trump just does not care.
So please, in November, take your anger and disgust to your neighbors and friends (and family) to move the boundaries of what Trump is doing!

Right on Gordo. We still have to call, whether they listen or not. We have to vote, we have to volunteer, we have to send money. If your representatives are on the right track, then send money to candidates in other districts. Volunteer for Sister District project. We can take this back.

On isolation: American citizens should be petrified. Many of you forget the USA in the time before Pearl Harbour. The US isolated themselves and vowed never to go to war again. Now Trump and his administration has decided the following: stopped TPP (draw a line separating the whole Asian and Latin American free trade; attempt to narrow NATO to separate the European Union - with support for populist leaders within many counties in order to break the EU apart (draw a line between USA and Europe); cancelling the Paris Accord (the ONLY) country should will NOT step up to saving our planet???) (draw a circle around the USA isolating them from the rest of the world; and finally NAFTA. Many Americans do not understand the ramifications to have an agreement with its neighbors but it will hurt you and your Canadian and Mexucan neighbors (draw a straight line across your northern and southern borders).
The point here: all countries need to trade with each other in this Global World. Taking the USA back 150 years dies not compute: African Americans picking the fields while the boss sips mint julips is no longer plausible-though many Trump base would love to see it.
The rest of the world do not like Trump. 85% of Canadians do not tolerate Trump. I don’t know numbers for other companies-but I know they are very high against Trump.
Best of luck. Get active. Do what you can and don’t give in to this racist.
I appolgize that my generation has produced someone like Trump!

Attaboy fat cat! Don’t give in.

Are my American neighbors not going to do anything about this? Is it about time to put down their iPhones and pads and pick up a phone to your senate and congressional reps! If you’ve forgotten-the congress works for you. Contact your representatives and voice your opinion. You would be surprised when they hear opinions from 1000 people-how much that influences their decisions. Readers who have Republican representatives especially have to be contacted. I am assuming that 99% of the readers are opened to Trump and his idiotic and unfit positions. Make it a point to call tomorrow!

Palm slap here, too! I am having a really difficult time wrapping my head around the idea that the President of the U.S. can get away with this. Part of me just wants to slap his head and say “Language!” and part of me is so mortified, I want to move to Australia where my sister has lived for 30 years until such time as I can be proud of my country’s leader, again. I’m equally appalled that there hasn’t been more of a congressional outcry about this. I feel as if everybody is just biding their time waiting for somebody else to take on the task of formally revolting against this revolting individual. But I’ve yet to see any strong leadership in terms of mounting an official effort to rid ourselves of this vulgar, immoral, ignorant, offensive individual. I know he has said he will participate in the annual physical but refuses to be psychiatrically evaluated. Is there any way that members of Congress can require this of him? I’ve called my state reps until I’m blue in the face. I end up talking to voice mail and get canned emails in return. I don’t believe they are paying attention for a moment. In fact, I can watch them flip flop daily. As a parent, I’ve promoted the democratic system to my kids for years, holding up the President as the ideal. Now one adult child refuses to discuss politics because it’s such a polarizing topic and she is moved to tears by all of the conflicting discussion among people she loves. The other takes great delight in watching the real-life soap opera but isn’t prepared to become active. I would do something but I’m the type who prefer more organized protests and that just isn’t happening where I live. Is there an underground movement that perhaps I haven’t heard about? (Sorry - can’t help but wonder about conspiracy theories). Meanwhile, my 90 year old Dad has decided he no longer wants to watch the news because he’s become a prude in his late age and can’t handle anybody swearing on TV. I often wonder how dull life may be once he’s out of office. But I’ll certainly have more time to pursue personal interests because I won’t be glued to the news 24/7 waiting to hear what else he has done. I know I’m in the majority but I often feel very isolated from others who agree with me. And I wonder how healthy it would be to spend day after day venting about this. But this comment really pushed my buttons. Sorry about the long post but I just have to get this out before I end up with an ulcer stressing out about this.

We call, we write, we email, and they ignore us. Our gov’t is broken, but we’re working to fix it. Please don’t think this is us.

Are my American neighbors not going to do anything about this? Is it about time to put down their iPhones and pads and pick up a phone to your senate and congressional reps! If you’ve forgotten-the congress works for you. Contact your representatives and voice your opinion. You would be surprised when they hear opinions from 1000 people-how much that influences their decisions. Readers who have Republican representatives especially have to be contacted. I am assuming that 99% of the readers are opened to Trump and his idiotic and unfit positions. Make it a point to call tomorrow!

Not exactly how it works, but okay. Thanks for the lecture.

I only wish that doing so (calling our senators & reps) was really effective. I’ve been doing just that, and all they do is hide, so beholden are they to rich supporters & complicit GOP. No objection to your “pep talk” but do realize this is complicated…that’s why we’re so stressed!