3/ The author of the Trump dossier told Mueller’s team that Russia asked Trump not to hire Mitt Romney as secretary of State, instead Russia advised Trump to pick someone who would ease sanctions against Moscow for its actions in Ukraine. Christopher Steele spoke with the special counsel’s investigators last September. In his 2012 presidential run, Romney called Russia “our No. 1 geopolitical foe.” (The New Yorker)

This whole piece is a stunning recap filled to brim with tiny new tidbits including who is thought to have leaked to Steele Dossier to BuzzFeed.

BuzzFeed has declined to reveal its source for the dossier, but both Orbis and Fusion have denied supplying it. By a process of elimination, speculation has centered on McCain’s aide, Kramer, who has not responded to inquiries about it, and whose congressional testimony is sealed. 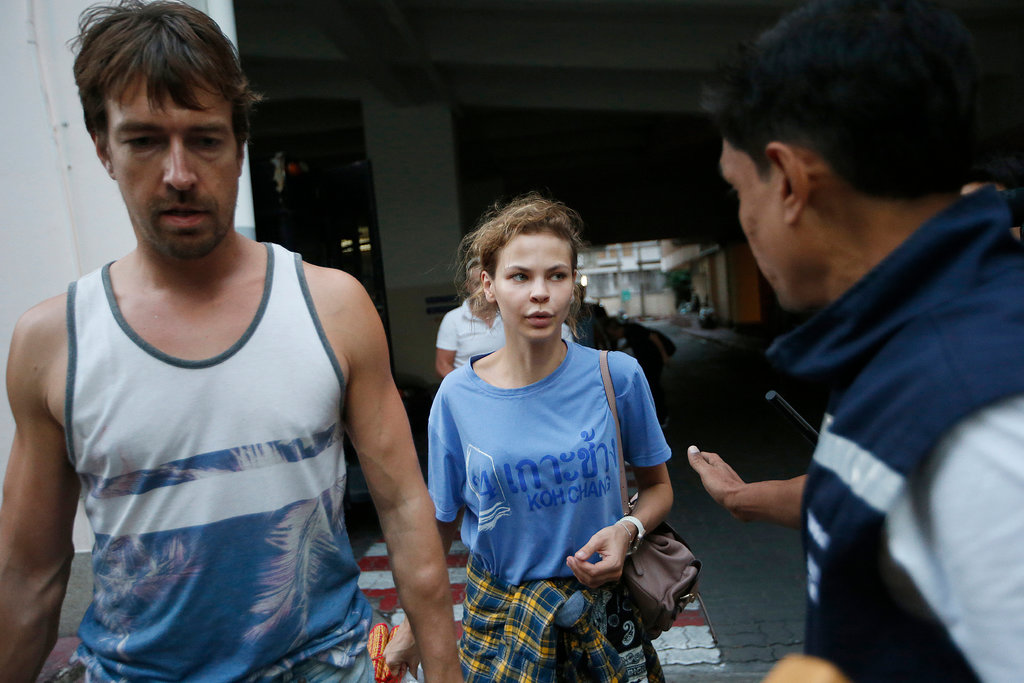 A Belarusian accused of involvement in a sex workshop in Thailand said she had more than 16 hours of taped conversations, including some about the presidential election.

If these tapes are ever made public (Lordy, I hope so.) I’ll be relying on you all to help me go through them and pull out the best clips for the podcast.

Did anybody else hear Jake Tapper interview Nunberg? What an idiot. I couldn’t believe how ridiculous and childish he sounded. And then I saw this: Twitter Implodes After Wild Sam Nunberg MSNBC Interview: 'Mental Breakdown on Live Television'

I wonder if this so-called breakdown transitioned from one network to another? He said several things that are quite suspicious and he didn’t hesitate to trash Trump. Then stated there’s no way he’s going to talk to the Grand Jury. That would involve at least eighty hours of going through emails and he is not interested in doing that. He claims he plans to rip up the subpoena rather than mess with Mueller. And wow… he was so quick to throw Stone under the bus. I’m speechless. How can he agree to be interviewed then act like such an ass?

Just saw a tweet that he was calling into CSPAN 3 after Tapper cut him off. Apparently he called CNN, too, after MSNBC cut him off. Whose next? The tweets about him are a riot it you’ve nothing better to do.

here’s a nice rundown of it all:

Hah! One of the CNN analysts just suggested he got up on the wrong side of the bed and needs a media hug. I believe he’s got some kind of agenda and is hinting at something but being evasive about what it might be. I don’t think that’s a message to Mueller but to some other person of interest. Blackmail, maybe? My imagination is running away from me. But I love that he made a reference to the Manchurian Candidate. I suggested that the other day, not that I want to have anything in common with Nunberg. To publicly flaunt your intention to blow off the Grand Jury just seems to be designed to get attention. Maybe he is just jealous of Trump and wants to distract the media and get his 10 minutes of fame. Afterall, he was fired by the Trump campaign folks, I believe. I’m on the edge of my seat waiting for Trump to tweet something about this.

He’s doing a live interview on CNN right now. (7 pm est) They sure got him to their studios quickly! Sam assured Erin that he is not off of his meds. What a drama queen! Ah. It sounds like he’s gunning for Sarah Huckabee Sanders’ position at the moment. He has absolutely nothing good to say about anyone. I’m done with my commentary, now. But I’m fascinated by this. He’s crazier than Trump.

Maybe they’re all drinking from the same water fountain?

What a patronizing arsehole. “Katie did someone whisper that question in your ear?”

Sam Nunberg Is going to be so hung over tomorrow.

Ha, ha, ya think? Bottom line, Nunberg’s antics today were just theater, his way of letting certain others know that he would not be voluntarily cooperating. The booze & antidepressants sure loosened his tongue.

Actually, one of the commentators for CNN remarked that he has had some mental health issues recently and was considered to be '“fragile” at the moment. He also admitted that he was taking his anti-depressants when asked if he was on any drugs. That wasn’t exactly what the interviewer meant but it was revealing. I’m no Freud but I do know a bit about mental illness. If I had to speculate, I would suggest that he might be mildly bi-polar and was acting in a manic manner. Sometimes, people who have been diagnosed as depressed and given antidepressants take years before the manic element manifests itself. So, he may have been in that mode.

It was also clear that he was being incredibly protective of Stone, almost to the extent that you had to wonder about their relationship. He seemed to be more focused towards the end of the interview at CNN and was pretty clear that going before the Grand Jury might result in him having to inpugn Stone for contacts with Wikileaks and he just was not willing to do that because he considered the man his mentor and father figure. Apparently, he changed his mind late tonight and told the AP that he would go before Mueller, now. I guess he had either sobered up, or somebody sat him down and explained a few things to him.

Robert Mueller's subpoena asked Nunberg to hand over communications related to Trump and nine other people, and to appear in front of a grand jury.

I missed the interview but have been hearing the talk about it afterwards…wow!? Must be something he forgot about having said…and/or pressure from others involved? Stonewalling Mueller won’t work, lol…
but let him try, the media loves the ratings from these sideshows. Remember that Mueller may already HAVE what he’s asking Nunberg for, & is just trying to see if Nunberg will lie about it or cover it up…I think he’s getting his answer.

Don’t forget, these are “all the BEST people!”!

Sammy: wash up, then grease up buddy. You are going to jail if you skip a subpoena from Mueller. This guy wants to protect his association with Roger Stone? Then he belongs in jail! Stone is probably worse than Trump-and that’s saying a lot. Take a read on ‘good ole Roger’

Here’s a supercut from one of the crazier interviews that Sam Nunberg did on MSNBC today: