TK/ Trump dictated Trump Jr.'s statement about meeting with a Russian lawyer at Trump Tower during the 2016 campaign. Trump and his advisers agreed that Trump Jr. should release a statement in order to get out in front of the story. The statement claimed that the meeting was "not a campaign issue at the time," but that they "primarily discussed a program about the adoption of Russian children," which was later shown to be misleading. Trump's decision to intervene in the response had not previously been reported. Rudy Giuliani responded, saying that "our recollection keeps changing" about the meeting and that "this is the reason you don't let this president testify in the special counsel's Russia investigation." (Washington Post / ABC News)

Welcome back @matt - hope you got what you needed away from this ever changing mess of an Administration.

Over the weekend, Giuliani said Trump “probably” has the power to pardon himself, but that it would be “unthinkable” for him to do so and would “lead to probably an immediate impeachment.” He added that Trump “has no need to do that. He didn’t do anything wrong.”

A lot of mentions that Republicans see that T did nothing wrong, and that there is certainly No Collusion.

See article in Washington Post about how Trump is defining himself - more a victim to this whole process.

Never mind that Donald Trump was born into extraordinary wealth, emblazoned his name on skyscrapers and golf courses across the globe and now is the elected leader of the free world.

In President Trump’s telling, which can often be more imaginary than real, he is a victim — a long-suffering, tormented victim.

(like Roseanne) For Trump, this posture makes and preserves political power. He has created around himself an aura of unfair persecution — by the nation’s elites, Democrats, the media and law enforcement — that inspires sympathy from and solidarity with his aggrieved supporters. The president as the persecuted: Donald Trump’s strategy of self-victimization

As a real estate developer and now as president, Trump has long sought to portray himself as a victim to inspire sympathy from the aggrieved.

2/ Trump tweeted that Robert Mueller’s appointment is “totally UNCONSTITUTIONAL!” and asserted that he has the "absolute right to PARDON myself.

Has the constitutional crises finally arrived? What do you all think? 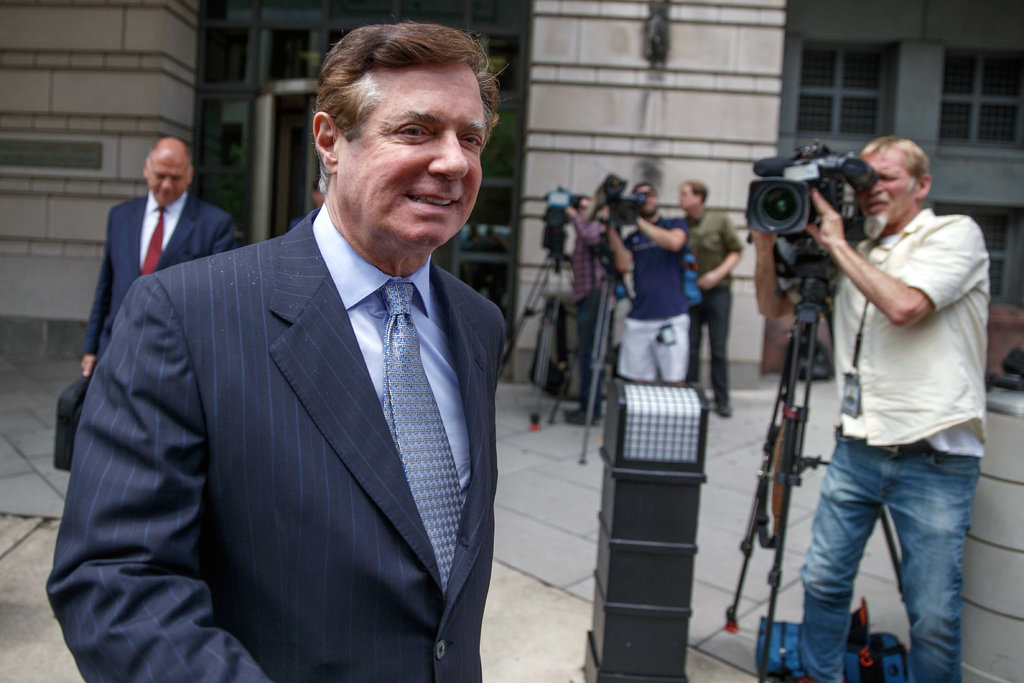 Prosecutors say President Trump’s former campaign chairman tried to contact witnesses in the case against him. They want his bail revoked or revised.

Prosecutors said that was a violation of Mr. Manafort’s release while he awaits trial. They asked a federal judge to revise the terms of his release or revoke it entirely, which would send him to jail until trial.

An F.B.I. agent, Brock W. Domin, wrote in court documents that at least one witness reported Mr. Manafort’s contact and said that he appeared to be trying to coach their story about Mr. Manafort’s lobbying practices. [Emphasis is mine --KJ]

IMHO
A bunch of moving parts still…everyone is going every which way and jockeying for position.

A lot of yelling and spouting on T 'n Co to create their own legal defenses vis-a-vis the Constitution, Presidental/Executive Rights.

But Mueller is the steady, quiet hand who we hope has all the legal ends pinned down.

Crazy for sure…not sure a Constitutional Crisis - yet.

In an earlier post I mentioned that Manafort had previously violated the terms of his release back in December when he ghost-wrote an editorial to influence public opinion on his trial. When I posted that, I didn’t realize that the same person who acted as Manafort’s intermediary on that violation was the person who acted on Manafort’s behalf in the witness tampering: Konstantin Kilimnik.

You may recognize this name because Kilimnik, a long time colleague of Manafort, has been accused of having ties to Russian intelligence services. Here’s the WaPo article from December outlining Kilimnik’s relationship with Manafort and with Russian intelligence, along with his involvement in the creation of the editorial that violated the terms of Manafort’s release.

So not only did Manafort tamper with witnesses, he did it with the help of someone who is tied to Russian intelligence. Astounding!

Here’s the full text of today’s filing against Manafort. And here’s the paragraph from that filing that “outs” Kilimnik as “Person A” – the person who, as established in the rest of the filing, assisted Manafort with the witness tampering.

The inference that Person A acted on Manafort’s behalf is all the more reasonable in light of evidence already before this Court demonstrating that Manafort and Person A coordinated in connection with an op-ed that appeared in the Kyiv Post during Manafort’s home confinement. [p. 14]

UPDATE: Now the WaPo has weighed in, also identifying “Person A” as Kilimnik:

Prosecutors ask for Manafort’s release terms to be revised or revoked.

And here’s the relevant paragraph:

In court documents, prosecutors with special counsel Robert S. Mueller III allege that Manafort and his associate — referred to only as Person A — tried to contact the two witnesses by phone and through encrypted messaging apps. The description of Person A matches his longtime business colleague in Ukraine, Konstantin Kilimnik.

And let’s not forget that this is strike two for Manafort. He also violated the terms of his release back in December when he ghost wrote an editorial to influence public opinion on his trial. He has used up any “mercy points” he might have had. I can imagine the judges (plural since he’s now charged in two districts) will show zero tolerance for this flagrant criminal act.

Media reports say some individuals receiving his messages turned those messages over to the DOJ. I guess they are trying to keep their own “butts” out of jail?
Old saying, “If you lay with a dog with fleas, you get fleas.”