1/ Trump nominated federal appeals court judge Brett Kavanaugh to succeed Justice Anthony Kennedy on the Supreme Court. Kavanaugh served under Kenneth Starr, the independent counsel who investigated Bill Clinton. Kavanaugh also worked on the 2000 Florida recount litigation that ended in a Supreme Court decision that handed George W. Bush the presidency. "What matters is not a judge's personal views," Trump said, "but whether they can set aside those views to do what the law and the Constitution require. I am pleased to say I have found, without doubt, such a person." Trump called Kavanaugh a judge with "impeccable credentials," and said he is "considered a judge's judge." (New York Times / NBC News / Politico / Washington Post)

Dems feel their fight boils down to Roe v Wade’s survival and healthcare…these two very polarizing issues are the cornerstone of the Democratic attacks.

The way the two possible ‘outliers’ Sen Collins and Sen Murkowski are looking more like they will vote Kavanaugh in however, making this a very uphill battle.

Before Judge Kavanaugh’s nomination on Monday night, Democrats had centered their strategy on abortion rights and health care. But the judge has given them a new line of attack: a 1998 law review article that he wrote casting doubt on whether a president could be indicted — a theory that goes to the heart of the special counsel’s investigation of Mr. Trump. 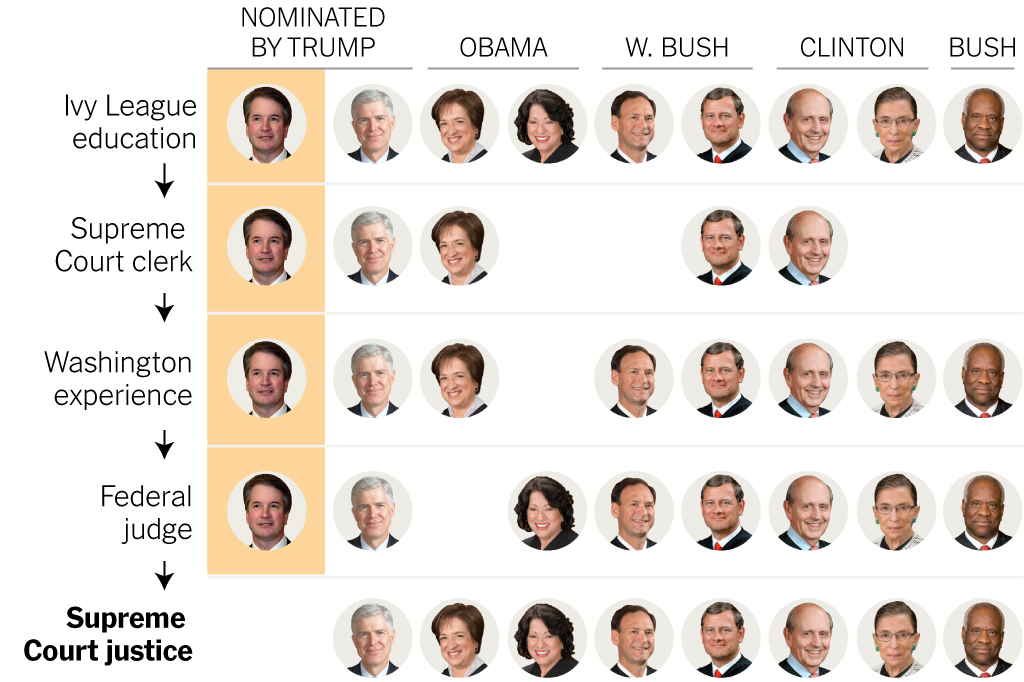 The background of justices typically includes some combination of an Ivy League education, a Supreme Court clerkship and a federal judgeship. 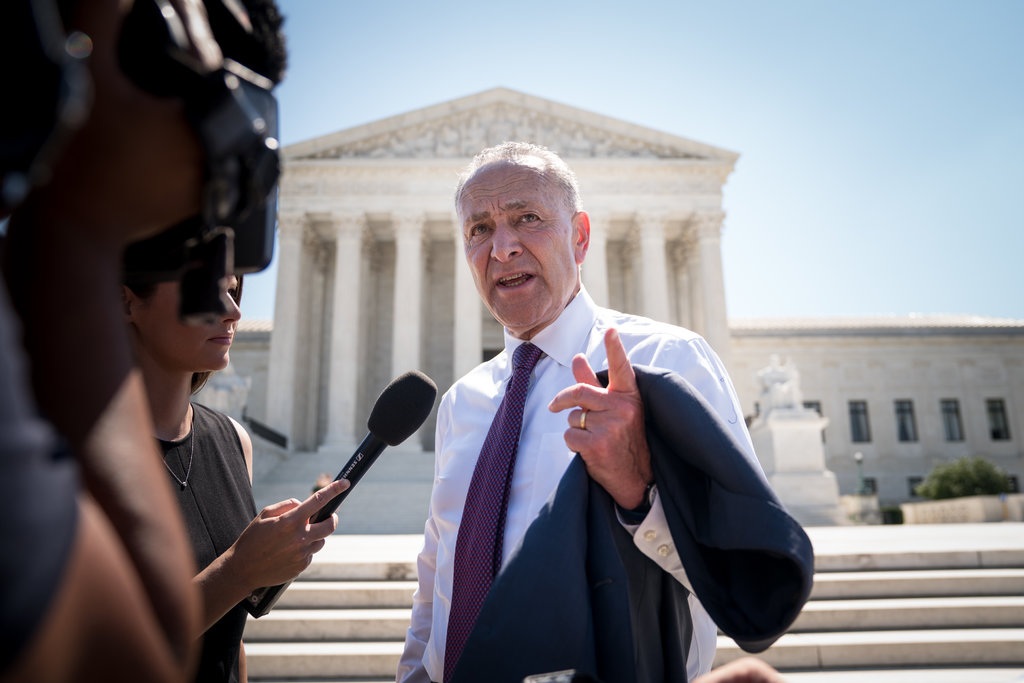 Democrats painted the Supreme Court nominee as an archconservative who would endanger abortion rights and health care and protect President Trump.

T went in for a ‘win’ with Kavanaugh as a choice for Supreme Court…and this is what the donor class cares about the most. If corporations get defended at the highest level, and Citizen’s United-type decisions are also ushered through, the President has done his job. We know that all vetting took place from within the Federalist Society, and hand picked by Leonard Leo…so this SCOTUS choice should be bullet proof in passing through the Senate. 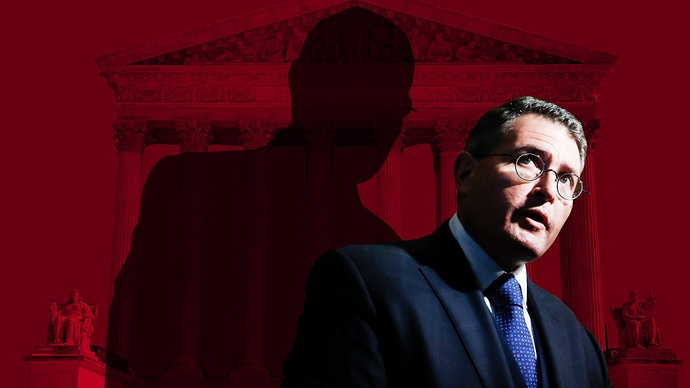 A Catholic fundamentalist who controls a network of right-wing groups funded by dark money has put three justices on the court. He’s about to get a fourth.

For Republicans, the consensus marks a gratifying departure from the internecine tensions that have crippled their party in recent years. This presidency has spawned many a think piece on how a pseudo-populist ideology has engulfed the GOP, but when it comes to the Supreme Court, Trump has governed as any traditional Republican, selecting justices that have even George W. Bush raving. “President Trump has made an outstanding decision in nominating Judge Brett Kavanaugh,” the 43rd president said in a statement. The Bushes have generally been critical of Trump, but Kavanaugh served in senior roles in the second Bush White House.

The warm statements appear to be another clear sign that the party apparatus—and, perhaps even more significantly, its donor network—will remain loyal to Trump, even as his stances on immigration and trade drift further and further from GOP orthodoxy.

“As long as he sticks to safe picks for scotus, he’ll never really lose the support and money of the party,” said a GOP operative involved in key Senate campaigns, who spoke on the condition of anonymity because he was not authorized to speak to the press. 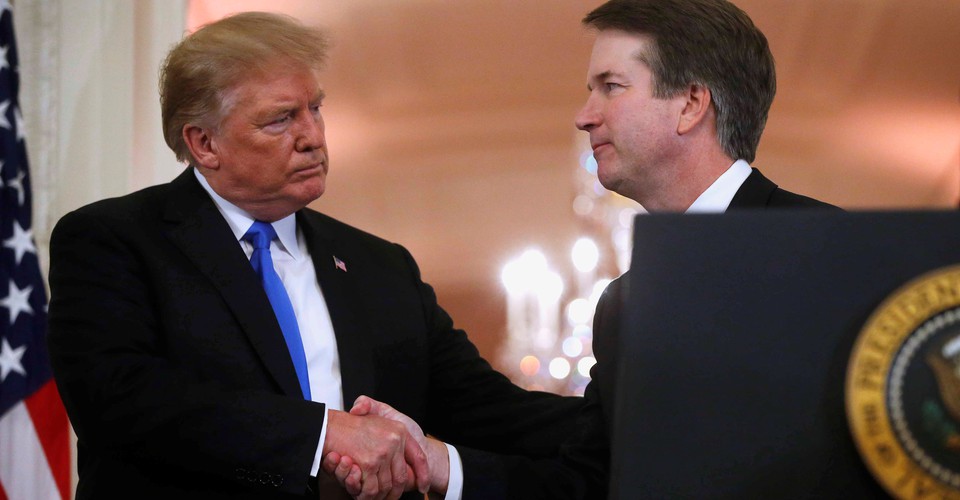 The Republican establishment’s glowing praise for President Trump’s Supreme Court nominee suggests that the GOP apparatus, and its donor network, will stay loyal.

As Trump arrives in Brussels for the NATO summit, the Senate just passed 97-2 a non-binding measure reaffirming the U.S. commitment to NATO. 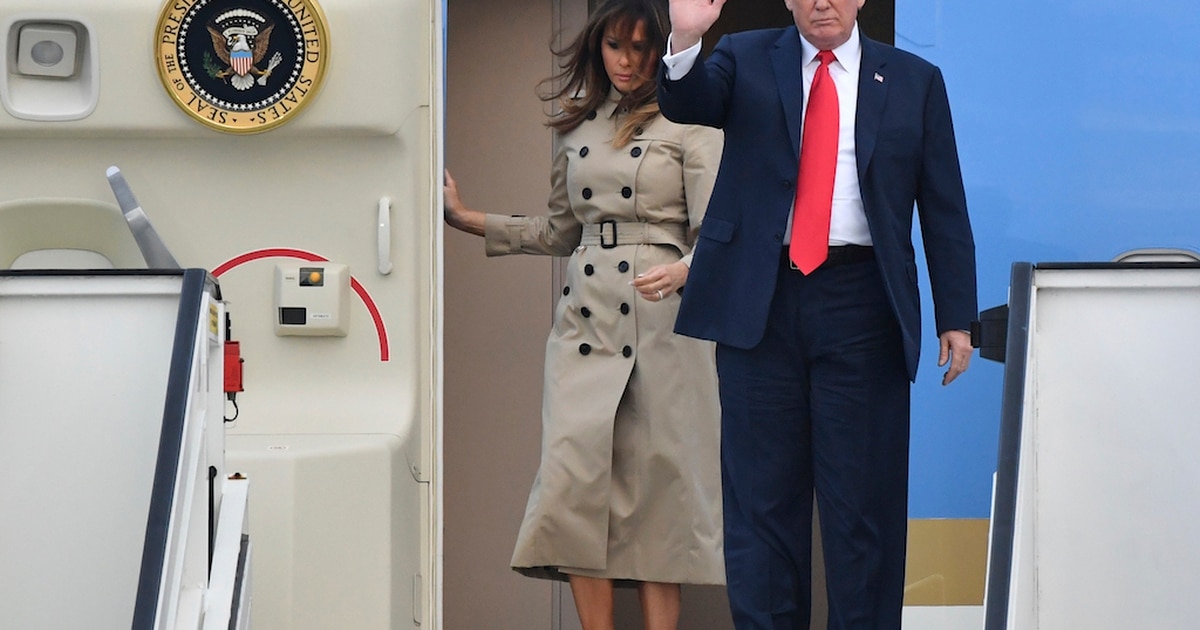 US Senate votes to defend NATO as Trump attacks alliance

President Trump's verbal attacks on NATO set off a flurry of legislative activity in the US Senate aimed at expressing support for the beleaguered alliance.

In Day 537 there is a mention of an article saying Heidi Heitkamp, Bill Nelson and Joe Donnelly in are all behind in the polls. 538 rates Survey Monkey polls as a D- in quality. It may not be great news but RealClear Politics rates all these races a toss ups. 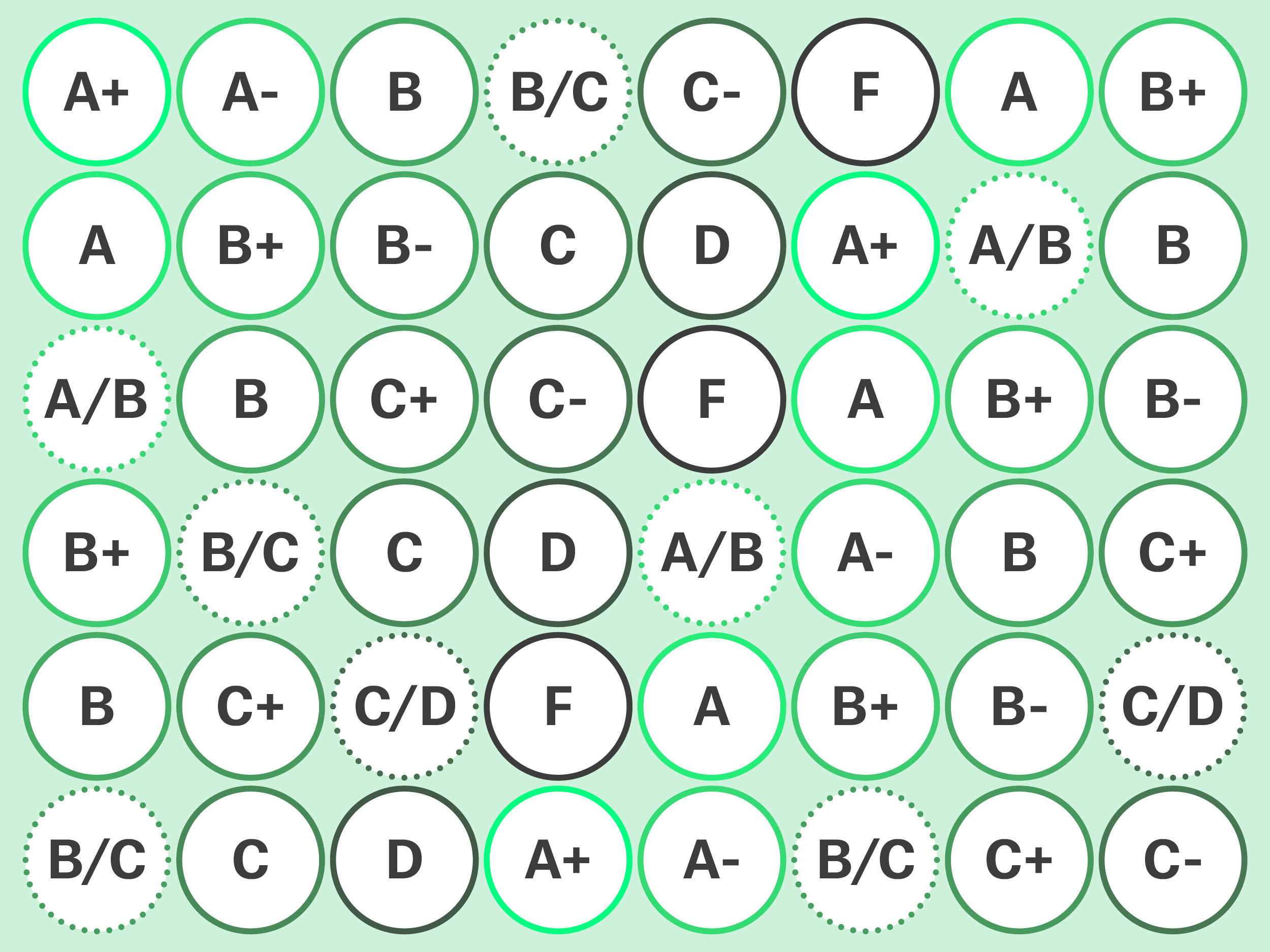 FiveThirtyEight’s pollster ratings are calculated by analyzing the historical accuracy and the methodology of each firm’s polls. 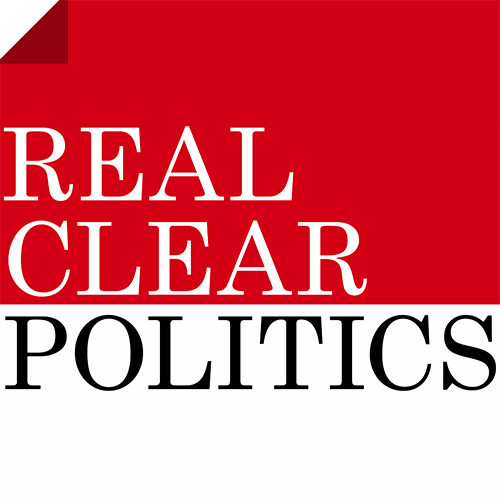 Written by Benjamin Wittes, who writes for Lawfare blog. He scrutinizes what Kavanaugh had stated at Minnesota. Law symposium 10 years ago. Erry.

Fyi ,-Wittes is one of those DC insiders, and would use ‘BOOM’ when some Mueller investigation related story would come up, that was hugely consequential. His twitter id @benjaminwittes

I think I am on safe ground in saying that when Brett Kavanaugh and I presented our papers at the Minnesota Law Review symposium in October 2008—his on separation of powers and mine on (of all things) judicial nominations—neither of us imagined that 10 years later, four pages of his text would be cited as proof that he is unfit for confirmation to the Supreme Court. Yet in the context of the Mueller investigation and the Trump presidency, a segment of Kavanaugh’s speech—the whole of which he later published as an article—has become an exhibit in the early case for the grave danger that he poses to our republic.

U.S. Circuit Judge Brett M. Kavanaugh, a former clerk for Supreme Court Justice Anthony M. Kennedy who was nominated replace him, has argued that presidents should not be distracted by civil lawsuits, criminal investigations or even questions from a prosecutor or defense attorney while in office.

Kavanaugh had direct personal experience that informed his 2009 article for the Minnesota Law Review: He helped investigate President Bill Clinton as part of independent counsel Kenneth W. Starr’s team and then served for five years as a close aide to President George W. Bush.

Having observed the weighty issues that can consume a president, Kavanaugh wrote, the nation’s chief executive should be exempt from “time-consuming and distracting” lawsuits and investigations, which “would ill serve the public interest, especially in times of financial or national security crisis.”

If a president were truly malevolent, Kavanaugh wrote, he could always be impeached.

Kavanaugh’s position that presidents should be free of such legal inquiries until after they leave office puts him on the record regarding a topic of intense interest to Trump — and could be a central focus of his confirmation hearing to succeed Kennedy, legal experts said.

Brett Kavanaugh and the Mueller Investigation: What Do His Writings Really Say?

I think I am on safe ground in saying that when Brett Kavanaugh and I presented our papers at the Minnesota Law Review symposium in October 2008—his on separation of powers and mine on (of all things) judicial nominations—neither of us imagined that...

Israeli, Saudi, and Emirati Officials Privately Pushed for Trump to Strike a “Grand Bargain” with Putin

Israeli, Saudi, and Emirati Officials Privately Pushed for Trump to Strike a...

Officials from the three countries have repeatedly encouraged their American counterparts to consider ending the Ukraine-related sanctions in return for Putin’s help in removing Iranian forces from Syria.


I’ll put this here and the moderators can move it if desired, the piece helps establish a motive for several already noted actions, such as Kushner using Russian communications equipment.
matt (Matt Kiser) closed July 26, 2018, 5:13pm #9

Correct – like all polling, your mileage may vary based on externalities.