1/ FBI agent Peter Strzok rejected accusations that he let his personal political views bias his actions in the Hillary Clinton email and Russia investigations during a joint House Judiciary and Oversight committee hearing. Strzok labeled the Republican attacks against him "another victory notch in Putin's belt and another milestone in our enemies' campaign to tear America apart." Republicans threatened Strzok with contempt after the committee devolved into partisan, chaotic arguments about what questions he could answer about the ongoing Russia investigation. Strzok has come under scrutiny after the Justice Department's inspector general discovered text messages critical of Trump that he exchanged with Lisa Page, a senior FBI lawyer he was having an affair with, during the 2016 campaign. Republicans and Trump charge that Strzok's text messages undermine the integrity of Robert Mueller's investigation. Strzok was immediately removed from Mueller's probe when the text messages came to light. Page declined to comply with a subpoena from Republican lawmakers to appear for an interview on July 11. (New York Times / Washington Post / CNN / NBC News / CNBC) Jailed Paul Manafort has a new address — and a new look

A judge ordered the former Trump campaign chief transferred to a new jail while he awaits trial.

How many times is Manafort going to get himself in trouble through needless blathering? He could have stayed in his cushy condo, but then he opened his big mouth and tampered with witnesses so the judge threw him in jail. Luckily for Manafort, it was a suburban jail in which he received VIP treatment, but then he had to open his big mouth again, this time bragging about his VIP treatment while simultaneously trying to con the judge into releasing him. So now the judge has stripped him of his celebrity status and thrown him in a grim, urban detention center – much more like “the big house.” If Manafort could just bring himself to be as talkative with Mueller’s team, they’d probably let him return to his cushy condo.

Brett Kavanaugh racked up tens of thousands of dollars in credit card debt from buying baseball tickets over the last decade. Supreme Court nominee Brett M. Kavanaugh incurred tens of thousands of dollars of credit card debt buying baseball tickets over the past decade and at times reported liabilities that could have exceeded the value of his cash accounts and investment assets, according to a review of Kavanaugh’s financial disclosures and information provided by the White House.

So there are two things to focus on here and they should be kept distinctly separate: 1) The facts of Kavanaugh’s financial disclosures and 2) The spin that we are told is “information provided by the White House.”

Why the spin? Why can’t the financial disclosures simply speak for themselves?

The only reason for the White House to add spin is if there is something fundamentally suspicious about these disclosures. We saw a similar gambit in July, 2017, when the Trump Tower meeting was disclosed. At that time, it became a known fact that the meeting took place (just like Kavanaugh’s credit card debt is now a known fact). However, the public was clamoring for answers; we wanted to know why the Trump Tower meeting was held. That’s when Trump Sr. stepped in and ghost wrote the adoptions spin that his son released under his own name. From the very start, that “adoptions excuse” sounded like pure phony baloney and, sure enough, it turned out to be a big, fat lie. This time around we have a “baseball tickets excuse” – and it smells just as bad.

The credit card debts and loan were either paid off or fell below the reporting requirements in 2017, according to the filings, which do not require details on the nature or source of such payments. Shah [the White House spokesperson] told The Post that Kavanaugh’s friends reimbursed him for their share of the baseball tickets and that the judge has since stopped purchasing the season tickets. [Bold and italics are mine - KJ]

Perhaps the WaPo is just doing a poor job of paraphrasing the White House’s spin, but the part of the paragraph I placed in bold really sounds like the equivocations of someone who is pulling the wool over your eyes.

First, look at the italicized phrase, “the judge has since stopped purchasing the season tickets.” That’s just like a shamefaced kid saying, “Mom, honest, I didn’t do anything wrong, but I stopped doing it.” If there was nothing wrong with the “baseball ticket thing” then why the need to say Kavanaugh stopped doing it?

Next, look at the first part of the bolded sentence. So his friends reimbursed him? Why didn’t Kavanaugh’s friends pay him up front? If Kavanaugh carried this large debt for even one month, the interest charge would be considerable. Perhaps he bought the tickets as gifts and then told his friends he thought better of it and would prefer that they reimburse him – that would also be strange. It sounds like more is going on here – that there may be something wrong with the way this debt was incurred and then paid off.

The bottom line is that, as per usual, the Administration is engaging in confusing doublespeak. These defensive ramblings just don’t add up – and what makes them even more suspicious is that the White House felt compelled to issue them at all.

Strzok labeled the Republican attacks against him “another victory notch in Putin’s belt and another milestone in our enemies’ campaign to tear America apart.” Republicans threatened Strzok with contempt after the committee devolved into partisan, chaotic arguments about what questions he could answer about the ongoing Russia investigation.

This circus of an inquiry is so unbelievably partisan. Republicans are giving no room for honoring that Peter Strzok has the right to free speech (1st Amendment.) Strzok did not go afoul of the Ethics clause within the FBI (he’s allowed his beliefs but he can not act on his political persuasion) condemning his role in any part of the Russian Investigation. It is horrifying to witness the take down of someone within the DOJ with the express purpose of ending of the Mueller investigation. 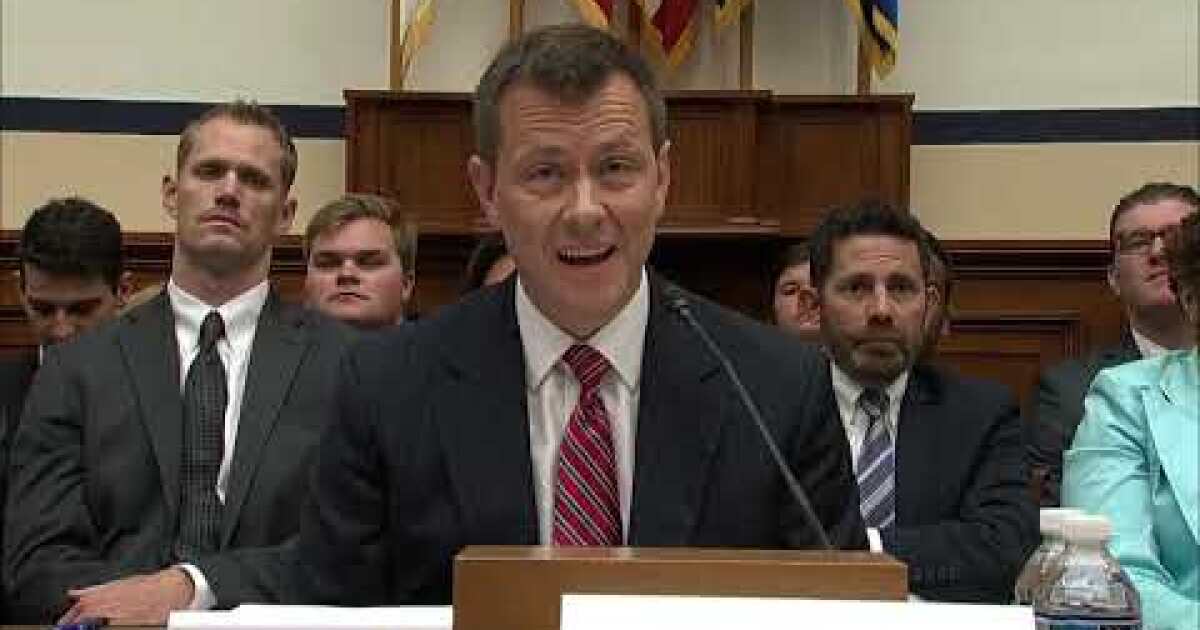 “Let me be clear, unequivocally and under oath: Not once in my 26 years of defending my nation did my personal opinions impact any official action I took,” Strzok told the House Judiciary and Oversight committees in a daylong joint hearing marked by harsh partisan sparring and sometimes fiery exchanges about his role.

I liked the questioning by Rep Lieu (D-CA) - simply put and very straightforward.

Predictably the Rep Gowdy (R-O) take down was horrendous. It gave Peter Strzok the moment to fight back.

The exchange between Gowdy — an outspoken Republican who rose to prominence over his handling of the congressional Benghazi hearings — and Strzok on Thursday ended with Strzok erupting into an impassioned monologue about how his personal texts did not interfere with any investigation, and blasting any attempt to use concerns about his texts to undermine confidence in the FBI.

“I can assure you Mr. Chairman, at no time in any of these texts did those personal beliefs ever enter into the realm of any action I took. Furthermore, this isn’t just me sitting here telling you, you don’t have to take my word for it,” Strzok said in a lengthy statement that ended with applause from Democrats. “At every step, at every investigative decision, there are multiple layers of people above me, the assistant director, executive assistant director, deputy director and director of the FBI, and multiple layers of people below me, section chiefs, supervisors, unit chiefs, case agents and analysts, all of whom were involved in all of these decisions.”

"They would not tolerate any improper behavior in me any more than I would tolerate it in them. That is who were are as the FBI. And the suggestion that I in some dark chamber somewhere in the FBI would somehow cast aside all of these procedures, all of these safeguards, and somehow be able to do that is astounding to me. It simply couldn’t happen. And the proposition that that is going on, that it might occur anywhere in the FBI, deeply corrodes what the FBI is in American society, the effectiveness of their mission, and it is deeply destructive." 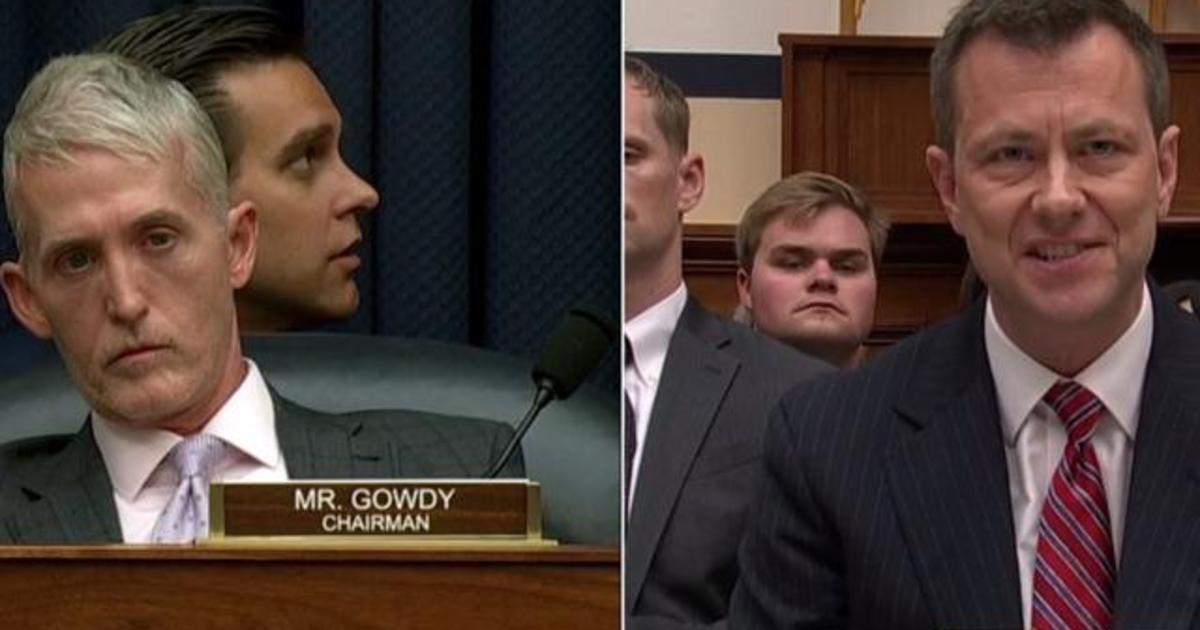 "I don't give a damn what you appreciate," Rep. Trey Gowdy fumed

Here’s more of the Administration’s attempt to expose more of the F.B.I’s classified information (having already exposed an informant - Mr. Halper, the retired professor.) They are setting up what may be termed a ‘distortion field’ I believe which invades the proprietary intelligence belonging and created by the DOJ, and redistributing it amongst their loyal Republican stalwarts (See Gang of 8)

Keeping up the invasion of separation of powers, by way sewing seeds of doubt (see Peter Strzok’s questions at the Congressional Oversight hearing today from the Republicans, trying to impugn that Strzok could neither be against T and be able to do his job without bias.) may be the number one mission of T’s defenders, like Rudy Guiliani, Rep Trey Gowdy, Rep Jim Jordan KellyAnne Conway etc.

WASHINGTON — The White House has rebuffed concerns among American intelligence and law enforcement officials and ordered that more lawmakers be given access to classified information about an informant the F.B.I. used in 2016 to investigate possible ties between the Trump campaign and Russia, according to two American officials with knowledge of the decision.

Both the director of national intelligence and the director of the F.B.I. tried to keep the classified documents tightly restricted, fearing that a broader dissemination of operational reports and other sensitive material could lead to more leaks of detailed information about the role of the confidential F.B.I. informant.

Some American officials believe, in fact, the reason the White House made the decision was to provide political ammunition to President Trump’s Republican allies who have argued — without any evidence — that the F.B.I. investigation was opened in July 2016 as an effort to keep Mr. Trump from becoming president.

The F.B.I. files about the informant will now be available to all members of the Senate and House Intelligence Committees, instead of to just a group of congressional leaders known as the Gang of Eight. It is unclear whether Mr. Trump or a lower-level White House official authorized the move. 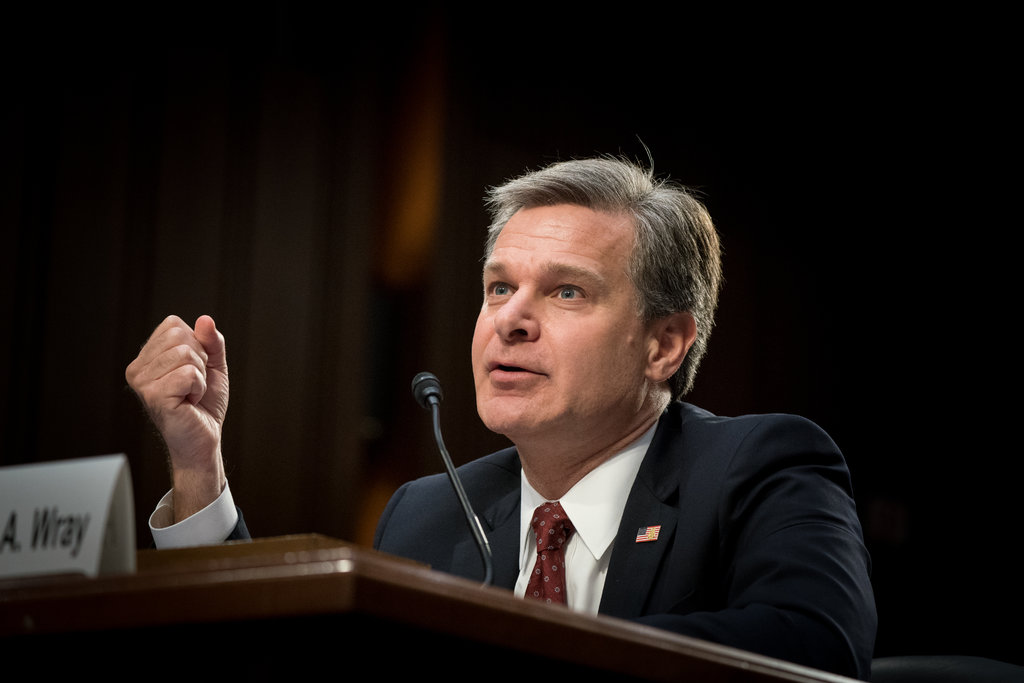 The full House and Senate Intelligence Committees will be able to read the documents, even though intelligence and law enforcement officials had urged that access be tightly restricted.

Yale Law School is touting their ability to be a king maker, and are sending out congratulatory notices about Supreme Court. Nominee Brett Kavanaugh. Their alum are saying. Wait a second…his record is not that exemplorary.

*Please sign below. Additional signatories will be added regularly* July 10, 2018 To Dean Gerken and the Yale Law School leadership, We write today as Yale Law students, alumni, and educators ashamed of our alma mater. Within an hour of Donald...