1/ Biden hailed the Inflation Reduction Act as “a historic agreement to fight inflation” and “the most significant legislation in history to tackle the climate crisis.” Biden’s remarks came a day after Joe Manchin blessed the package that would raise $739 billion over the decade in new revenue, including $313 billion from a 15% corporate minimum tax, spend $369 billion on energy and climate change initiatives, allow Medicare to negotiate the cost of some prescription drugs, provide three years of Affordable Care Act subsidies, and make changes to the tax code. Climate and energy provisions in the legislation are sufficient to cut U.S. carbon dioxide emissions 40% by 2030. Kyrsten Sinema, however, hasn’t publicly backed it or commented, and did not attend the caucus meeting. Senate Democrats want to get the bill passed before the chamber’s August recess, which is scheduled to begin August 6. To do that, the bill will first need to comply with the parliamentarian’s strict budget rules, then Democrats will need to have all 50 members to be present and vote for the package – as well as the tie-breaking vote from Harris – for it to pass the Senate with a simple majority. “My plea is: Put politics aside. Get it done,” Biden said. “We should pass this.” (Politico / The Guardian / Associated Press / Politico / Washington Post / New York Times / Bloomberg / NBC News)

How is anybody this stupid? 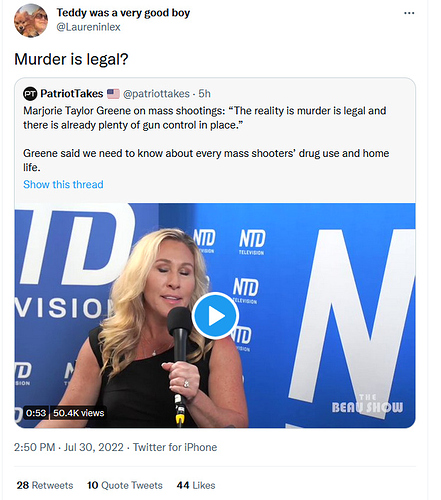 Well @Windthin, reading today, I see that there are some in America who want to make it so!

Is it legal to kill someone who is about to have an abortion? I know that sounds like a ridiculous question, but some people on the far right would like it to be. Social media was recently awash with outrage over a bill introduced by North Carolina state legislators that would legalize violence against anyone undergoing or performing an abortion. North Carolina House Bill (HB) 158, sponsored by a Republican state representative, Larry Pittman, proposed that abortion be considered first-degree murder and would allowed civilians to use deadly force to prevent someone from ending a pregnancy.

How is anybody this stupid?

And how does anyone vote for her? I mean, come on!!