1/ Trump's national security team said that Russia is behind "pervasive" and "ongoing" attempts to interfere in upcoming U.S. elections. "The threat is real. It is continuing," said Dan Coats, Director of National Intelligence. Hours later, Trump defended his "great meeting with Putin" said "the Russian hoax" is hindering his goal of improve relations with the world’s second-ranked nuclear power. (Reuters / CNBC / CNN)

There is Mr. Trump’s foreign policy, and then there is the foreign policy of the rest of the Trump administration, backed by the Republican Party. This week, the two were openly at odds with each other. Be it Russia, NATO, Iran or North Korea, Mr. Trump’s staff and his party projected a radically different message than the president himself.

“There is a clear dissonance between what the president says and what his administration says,” said Vali R. Nasr, the dean of the Johns Hopkins School of Advanced International Studies, “and it has been noticed by allies and adversaries around the world.” 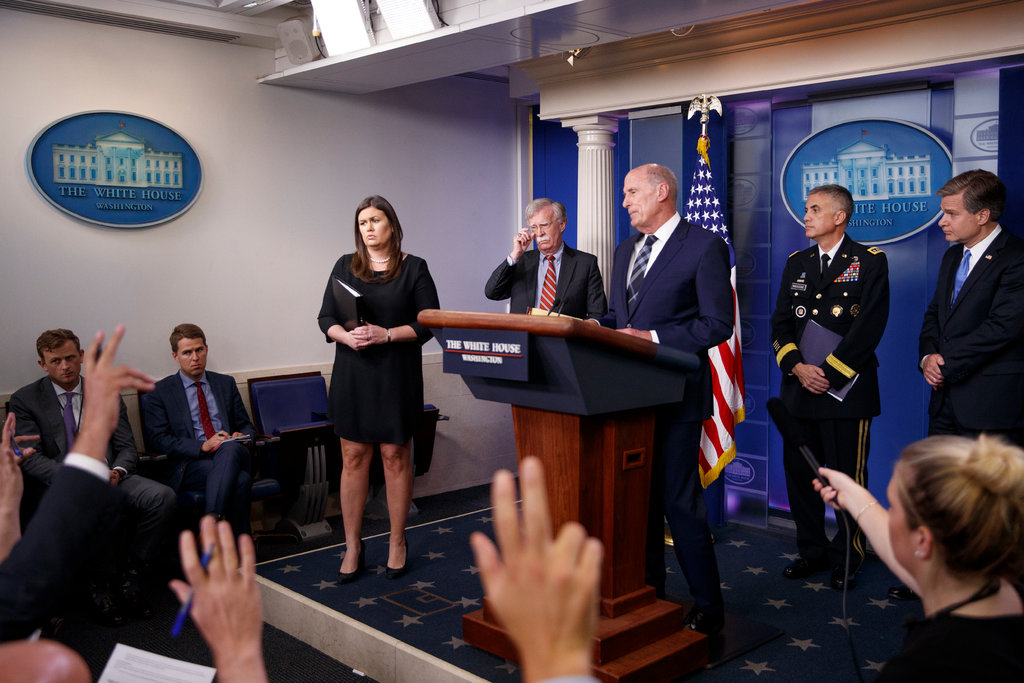 Nowhere were these differences more jarring than in the response to concerns that the Russian government is plotting to interfere in the midterm elections. Emails show Butina sought out J.D. Gordon, a former campaign national security aide, as he prepared to work on the presidential transition.

Is it just a coincidence that J. D. Gordon was also the Trump campaign official who coordinated the controversial Russian-friendly change to the Republican platform at the national convention?

Gordon has also said he briefly met Russian Ambassador Sergey Kislyak at the Republican National Convention, in an exchange he has said was innocuous. And he was the Trump campaign’s point person for a Republican platform committee discussion in which he argued against language that would have endorsed having the United States send lethal weapons to Ukraine. The proposed provision, which was not adopted, was perceived as hostile to Russia.

Here’s an excellent contemporaneous article from the Daily Beast about the plaform change and Gordon’s involvement with it. Note that “Mr. Credibility,” Paul Manafort, who was campaign chairman at the time, vigorously denied that he or anyone else on the Trump campaign was involved. 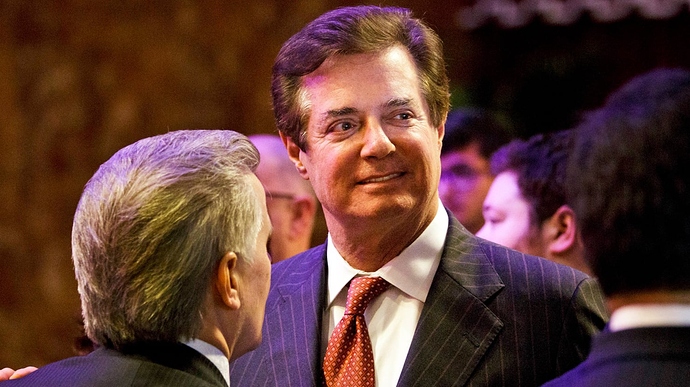 Top Trump aide Paul Manafort swore that the campaign had nothing to do with a radical change in the official Republican Party position on Ukraine. He was lying.

The Trump campaign went out of its way to dramatically alter the Republican Party’s official position on Ukraine—against the wishes of GOP hawks and despite senior Trump aide Paul Manafort’s insistence that they weren’t involved.

The move, first reported by The Washington Post, alienated Republicans who have made up the party’s foreign policy base for decades, and indicates that the Trump campaign has a particular interest in Ukraine, where Manafort had previously worked for a pro-Putin leader. . . .

According to two Republican delegates, the Trump campaign’s efforts were led in part by J.D. Gordon, a Trump campaign official and a former spokesman at the Pentagon.

Meanwhile, records for the meeting seem to have disappeared. A co-chair for the national security platform subcommittee told The Daily Beast that the minutes for the meeting have been discarded. The Republican National Committee had no comment when asked whether this was standard procedure for all the subcommittees.

So records of the meeting disappeared? Maybe Manafort’s accountant has them.

And BTW, here’s that infamous photo Trump released on Instagram in April, 2016, of his National Security Advisory Team. Gordon is sitting between Sessions (caught lying to Congress about meetings with Russians) and Papadopoulos (caught lying to the FBI about meetings with Russians). I understand that they are all together at the head of the table (near the catering cart) so they can more easily serve coffee. 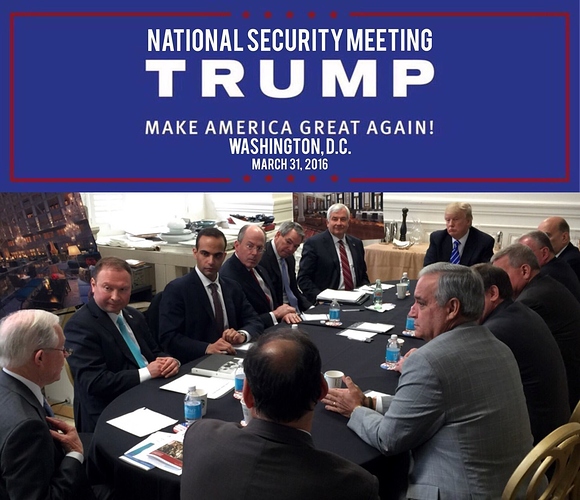 so they can more easily serve coffee.

Keen eyes to be on the lookout for the coffee boys.

Not sure how this info can be used against the Steele Dossier and therefore in favor of T and his supporters.
It was also reported in RT.

Why did Steele get cold feet? Is this the accurate reason for not getting involved with fBI?

Anybody have a theory on this…

As first reported by the Washington Post, the FBI reached a deal in October 2016 to pay Steele to continue the research that had led to what became known as the Trump dossier, an indication of how seriously the bureau was taking the allegations, according to a person familiar with the matter.

The deal fell apart when Steele pulled out, said the source, who has direct knowledge of the situation.

Steele, a former MI6 operative who opened a private firm, compiled the Trump dossier during the 2016 presidential campaign under contract to the U.S. research firm Fusion GPS.

Fusion had been hired to get information on Trump during the primaries by a Republican media firm, Washington Free Beacon. When Trump became the Republican nominee, the Clinton campaign and the Democratic Party began picking up the tab for the Fusion research. Fusion owner Glenn Simpson hired Steele, a Russia expert, to gather information from his sources in Russia.

Steele’s sources told him the Russian government was working with Trump to try to help him beat Clinton, including providing hacked emails. That unproven allegation is among those being investigated by special counsel Robert Mueller.

Michael Cohen, Trump’s former lawyer, sued Fusion and the website BuzzFeed after BuzzFeed published the dossier in January 2017. In addition to lurid stories about Trump’s personal behavior and allegations of collusion, the dossier said Cohen met with Russian officials in a country in the European Union — which was later reported to have been the Czech Republic. Cohen has denied the meeting ever took place and offered his passport as proof he has never been to Prague.

Cohen has dropped the suits.

NBC News reported in October that members of Mueller’s team had traveled to interview Steele about his information gathering for the American opposition research firm Fusion GPS.

An April report from McClatchy, meanwhile, said Mueller has found evidence that Cohen did travel to Prague.

President Donald Trump and his allies have claimed that Mueller’s Russia investigation was improperly launched on the basis of the dossier and of a secret warrant that authorized electronic surveillance of former Trump aide Carter Page.

“So we now find out that it was indeed the unverified and Fake Dirty Dossier, that was paid for by Crooked Hillary Clinton and the DNC, that was knowingly & falsely submitted to FISA and which was responsible for starting the totally conflicted and discredited Mueller Witch Hunt!” the president wrote in a tweet Monday morning.

It has already been established by the House Intelligence Committee that the Russia investigation began after the FBI learned that another campaign aide, George Papadopoulos, had been approached by a Russian agent. The agent told Papadopoulos the Russians had incriminating information about Hillary Clinton, including emails, according to court documents. Papadopoulos then mentioned to an Australian diplomat that the Russians had “dirt” on Clinton, the Australians contacted the U.S. government, and the FBI began to take a look.

The Steele dossier formed a portion of the evidence used to meet the surveillance warrant’s legal burden of establishing “probable cause” that Page was an agent of Russia. But people who have read the supporting documents for the FISA warrants, including Rep. Adam Schiff, the ranking Democrat on the House Intelligence Committee, say they contain secret evidence establishing ties between Page and Russians — evidence that goes beyond what was included in the dossier. Frank Figliuzzi, the former FBI counterintelligence chief who is now an NBC News analyst, says that likely includes reporting from human sources and intercepted communications. Page denies that he was an agent of Russia and has not been charged with a crime.

The FBI also disclosed to the court that authorized the warrant that Steele was paid by people seeking to discredit Trump, but said it viewed Steele as credible. The 71 pages of correspondence with former British spy Christopher Steele are heavily redacted.