1/ The Justice Department obtained the search warrant for Trump’s Mar-a-Lago estate after receiving evidence that highly classified government documents were “likely concealed and removed” from a storage room as part of an effort to “obstruct” the FBI’s investigation. In a 36-page court filing, federal prosecutors said Trump’s representatives falsely claimed that a “diligent search” had been conducted and all sensitive material had been returned. “The government also developed evidence that government records were likely concealed and removed from the Storage Room and that efforts were likely taken to obstruct the government’s investigation,” Justice Department counterintelligence chief Jay Bratt wrote. More than 100 additional classified items were found during the Aug. 8 search, including three classified documents in desks inside Trump’s office and material so sensitive that “even the FBI counterintelligence personnel and DOJ attorneys conducting the review required additional clearances before they were permitted to review certain documents.” In total, more than 320 classified documents have now been recovered from Mar-a-Lago. Trump’s team has a deadline of 8 p.m. ET on Wednesday to respond to the government’s filing. (New York Times / Washington Post / Politico / NPR / CNN / Wall Street Journal)

A filing by Alina Habba in the case over Trump’s business empire could create exposure in the matter of classified information being stored at the ex-president’s home.

A filing by Alina Habba in the case over Trump’s business empire could create exposure in the matter of classified information being stored at the ex-president’s home.

BREAKING WaPo: Ginni Thomas pressed lawmakers to overturn Joe Biden's 2020 victory not only in Arizona, as previously reported, but also in a second battleground state, Wisconsin, according to emails obtained under state public-records law. washingtonpost.com/investigations…

The wife of the Supreme Court justice urged lawmakers to disregard the popular vote not only in Arizona, as previously reported, but also in Wisconsin, emails show.

Somewhere right now, lawyers are washing down Xanax with bourbon whiskey straight from the bottle. https://t.co/OLRK1Ro9Ig 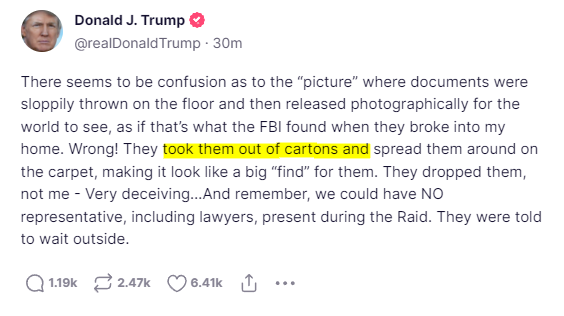