1/ The Department of Homeland Security diverted nearly $10 million from FEMA to help ICE pay for detention and removal operations. A newly released budget document shows DHS diverted the funds from FEMA at the beginning of the hurricane season, which began in June. The money was taken out of FEMA's operations and support budget and was transferred into ICE accounts to pay for additional detention camps and other expenses. A spokesperson for DHS pushed back on Twitter: "Under no circumstances was any disaster relief funding transferred from @fema to immigration enforcement efforts. This is a sorry attempt to push a false agenda at a time when the administration is focused on assisting millions on the East Coast facing a catastrophic disaster." (New York Times / Axios / Maddow Blog)

The thin lead that R’s probably have on Kavanaugh’s advancement to the Supreme Court…and Sen Collins is not having any outside influencers.

Vote is on Thurs 9.14 unless otherwise.

With last week’s confirmation hearings behind them, interest groups and advocates are spending hundreds of thousands of dollars on advertising to target both Ms. Collins and another undecided Republican who supports abortion rights: Senator Lisa Murkowski of Alaska. Also in the cross hairs are three vulnerable Democrats running for re-election in states won by President Trump.

But Ms. Collins, who prizes her reputation for independence, appears to be bearing most of the onslaught. Her decision will probably influence that of Ms. Murkowski, as well as those of the three vulnerable Democrats: Senators Joe Manchin III of West Virginia, Heidi Heitkamp of North Dakota and Joe Donnelly of Indiana.

The campaign aimed at Ms. Collins comes largely from progressive groups, abortion rights advocates and other opponents of Judge Kavanaugh. Planned Parenthood has conducted focus groups with independent female voters in Maine. Activists have streamed into Ms. Collins’s offices in Portland and elsewhere with stacks of letters and oral testimony of abortions and pre-existing health conditions.

“This quid pro quo fund-raising campaign appears to be the equivalent of an attempt to bribe me,” Ms. Collins said in an emailed statement Tuesday, adding, “Attempts at bribery or extortion will not influence my vote at all.”

(Ms. Collins, however, did tell a Maine newspaper that if in fact Judge Kavanaugh “was not truthful, then obviously that would be a major problem for me.”) 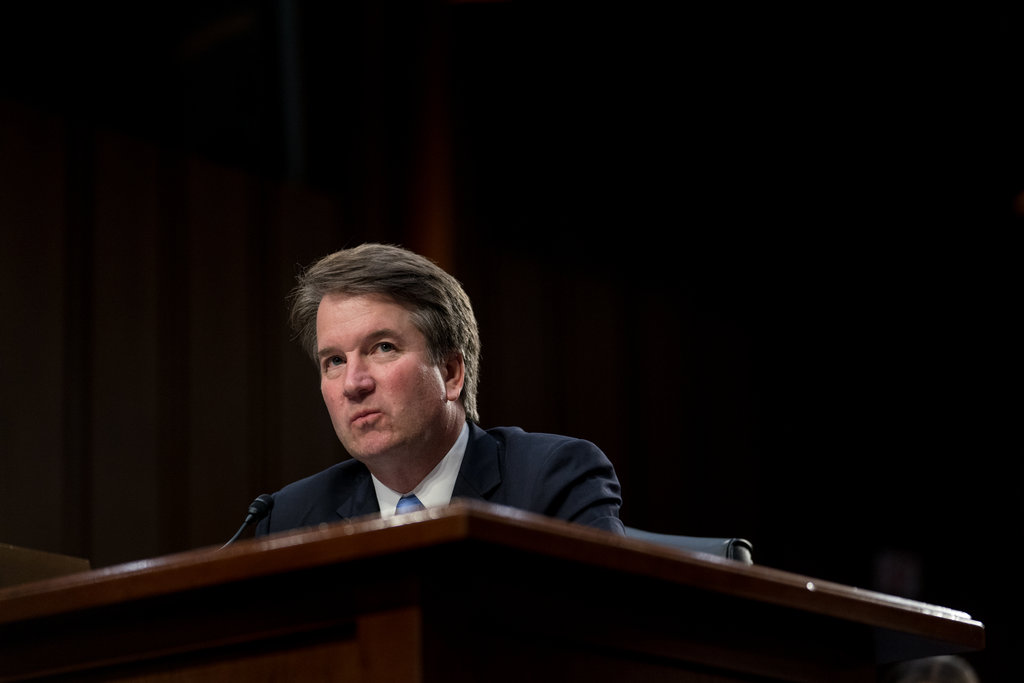 Interest Groups Turn Up Pressure on Senators Before Kavanaugh Vote

Manafort is trying to get a reduced sentence but not cooperate with prosecutors, leaving him the option to get pardoned by T. That’s what he’s aiming for.

Sources tell ABC News that Mueller’s office is seeking cooperation from Manafort for information related to President Donald Trump and the 2016 campaign. Manafort, however, is resisting and his team is pushing prosecutors for a plea agreement that does not include cooperation, at least as related to the president, sources said. 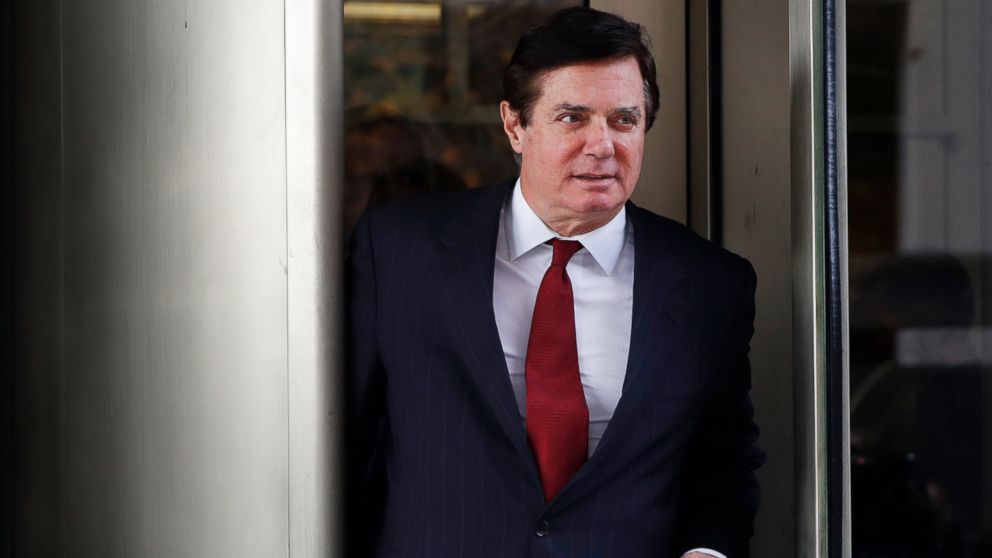 What can Manafort offer if he’s not willing to give information on Trump? 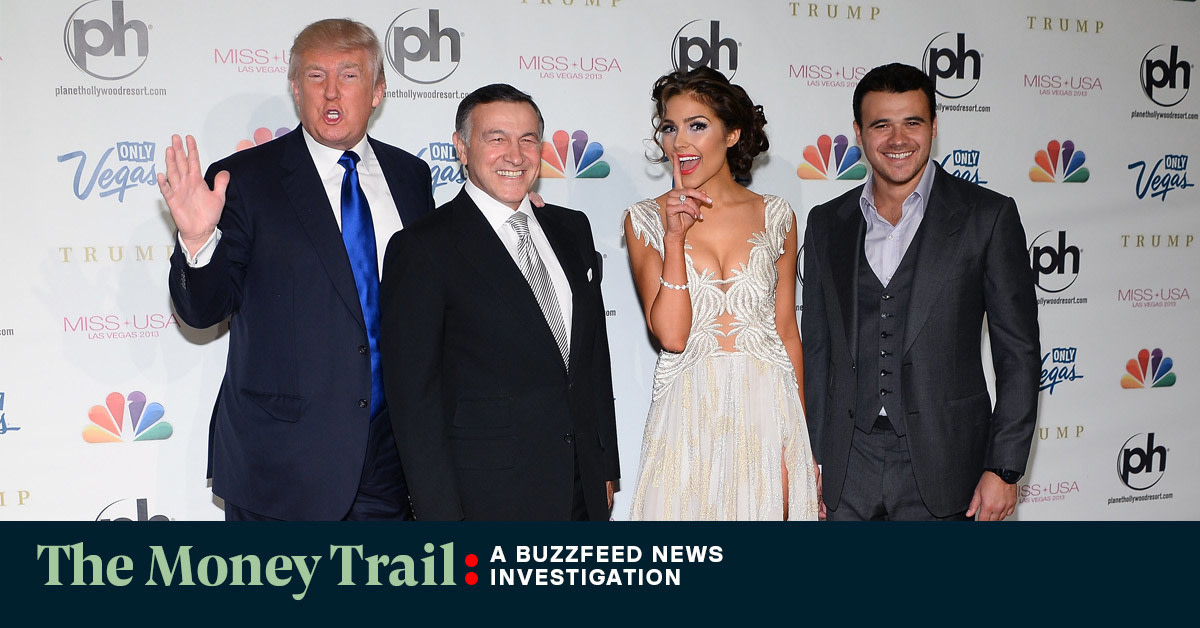 Investigators are focused on two bursts of banking activity — one shortly after the June 2016 meeting, the other immediately after the presidential election.

What is $45 million floating around for…is it money laundering?

But it could involve T by funding interference campaign in 2016.

More questions for Kavanaugh from Sen Kamala Harris (CA-D) - regarding a former boss, Judge Kozinski who was made to immediately retire after it was learned he had been a sexual predator. What did Kavanaugh know? 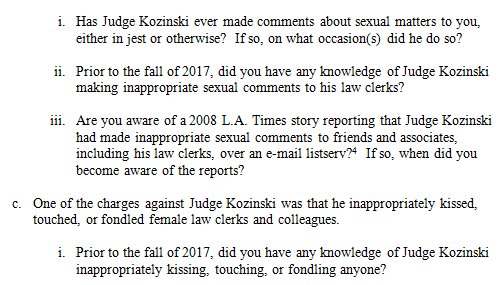 Senator @KamalaHarris to Brett Kavanaugh: "Has Judge Kozinski ever shared pornography with you?"

Alex Kozinsk: “It grieves me to learn that I caused any of my clerks to feel uncomfortable; this was never my intent.” The Supreme Court nominee’s explanation is part of written responses to questions posed by the Senate Judiciary Committee.

No bombshells here – unless Kavanaugh is caught in a lie.

He explains his arrangements for buying baseball tickets and then being reimbursed by friends which he says accounts for the debt on his credit card and the fact that it was paid back rapidly. He also says he has never accrued gambling debts. I’m just basing this on what is paraphrased in the above article, since I have not yet seen a copy of Kavanaugh’s written answers.

In explaining the debt to members of the committee, Kavanaugh noted that he is a “huge sports fan” and that he began buying four season tickets annually from the Nationals’ arrival in Washington in 2005 until 2017. He also bought playoff packages in 2012, 2014, 2016 and 2017.

He split the tickets with a “group of old friends” through a “ticket draft” at his home, Kavanaugh said.

“Everyone in the group paid me for their tickets based on the cost of the tickets, to the dollar,” Kavanaugh said in the written responses to the Senate Judiciary Committee that were made public Wednesday. “No one overpaid or underpaid me for tickets. No loans were given in either direction.”

In 2016, Kavanaugh reported between $60,000 and $200,000 in debt, according to his financial disclosures, spread out over three credit cards and a loan. The debts were either paid off or dipped below the reporting requirements the following year.

Later in the article:

Kavanaugh wrote in his responses that he has never reported a gambling loss to the Internal Revenue Service or accrued gambling debt.

Looks like the Kavanaugh vote has been delayed until Sept 20th. 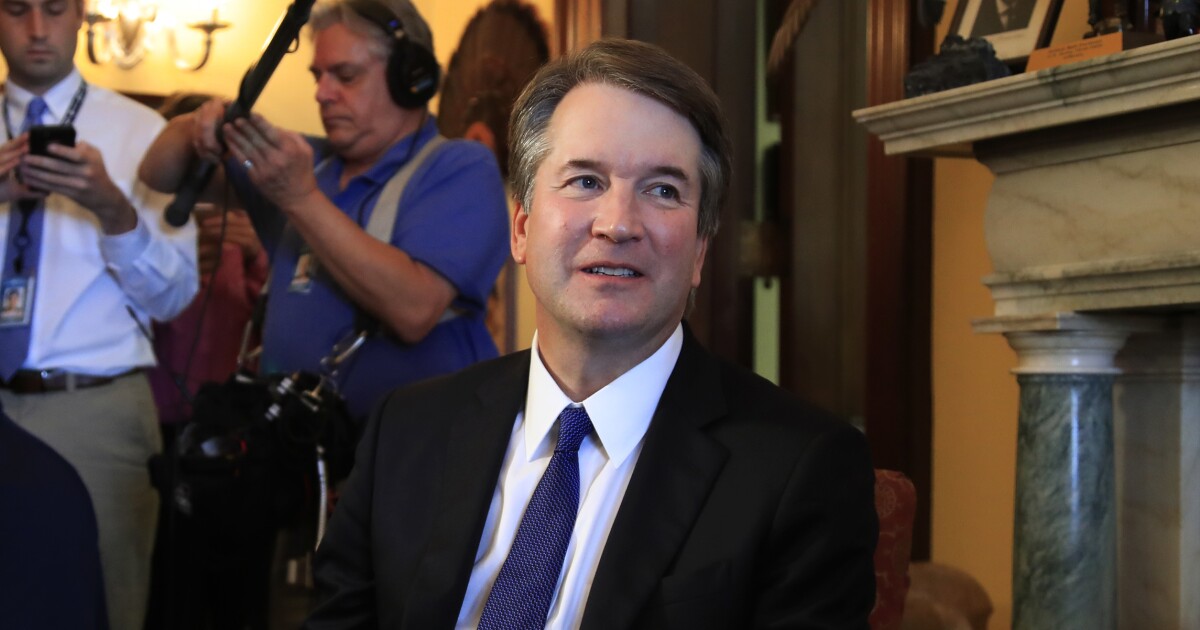 Democrats to delay Kavanaugh vote until next week

Democrats are poised to block a Thursday committee vote to advance the nomination of Brett Kavanaugh to the Supreme Court.

What is Sen Graham after by being such a big advocate for T? Some say he is looking at DOJ head, Jeff Sessions job. Astounding amount of patronizing.

“There’s no doubt in my mind that the people of South Carolina, not just Republicans and independents, want to give this country a chance,” Graham said. “The president won the state decisively. He’s very popular among Republicans, and people want him to succeed.”

Graham is hardly alone in facing a choice about how best to navigate the politics of the Trump era.

Some GOP lawmakers, like Sen. Jeff Flake and Sen. Bob Corker, have openly criticized Trump, to their own political detriment. Both are retiring. Others have been unabashed advocates of the president.

Then there are the former presidential rivals, Kentucky Sen. Rand Paul, Florida Sen. Marco Rubio — and now Graham — who have cozied up to Trump despite their campaign trail criticism, giving them a calling card to try to influence policy.

When Trump wanted to vent about Woodward’s work, and leaks about a “resistance” within his administration, he talked to Graham about it.

“He’s pissed off, he feels betrayed, and I don’t blame him,” Graham said.

Particularly in the national security realm, Graham, a defense hawk, provides an alternative to Trump’s noninterventionist streak. In that way, Graham is upholding McCain’s approach and countering another Trump whisperer, the libertarian-leaning senator Paul.

Because of Graham’s relationship with Trump, the political world was jolted last month when he said the president may dismiss Attorney General Jeff Sessions after the election. It seemed as if Graham had inside knowledge of the decision, and it was an about-face from just last year, when Graham said Trump would have “holy hell to pay” if he fired Sessions.

There was a time when the Trump-Graham nexus of golf outings and White House lunches was inconceivable. Shortly after Trump launched his presidential bid in mid-2015, Graham called him a “jackass” who “shouldn’t be commander-in-chief” for making disparaging remarks about McCain. Campaigning in Graham’s home state a day later, Trump opened a rally by calling Graham a “lightweight” and “idiot” before reading out the senator’s private cellphone number to the delight and disbelief of the crowd. 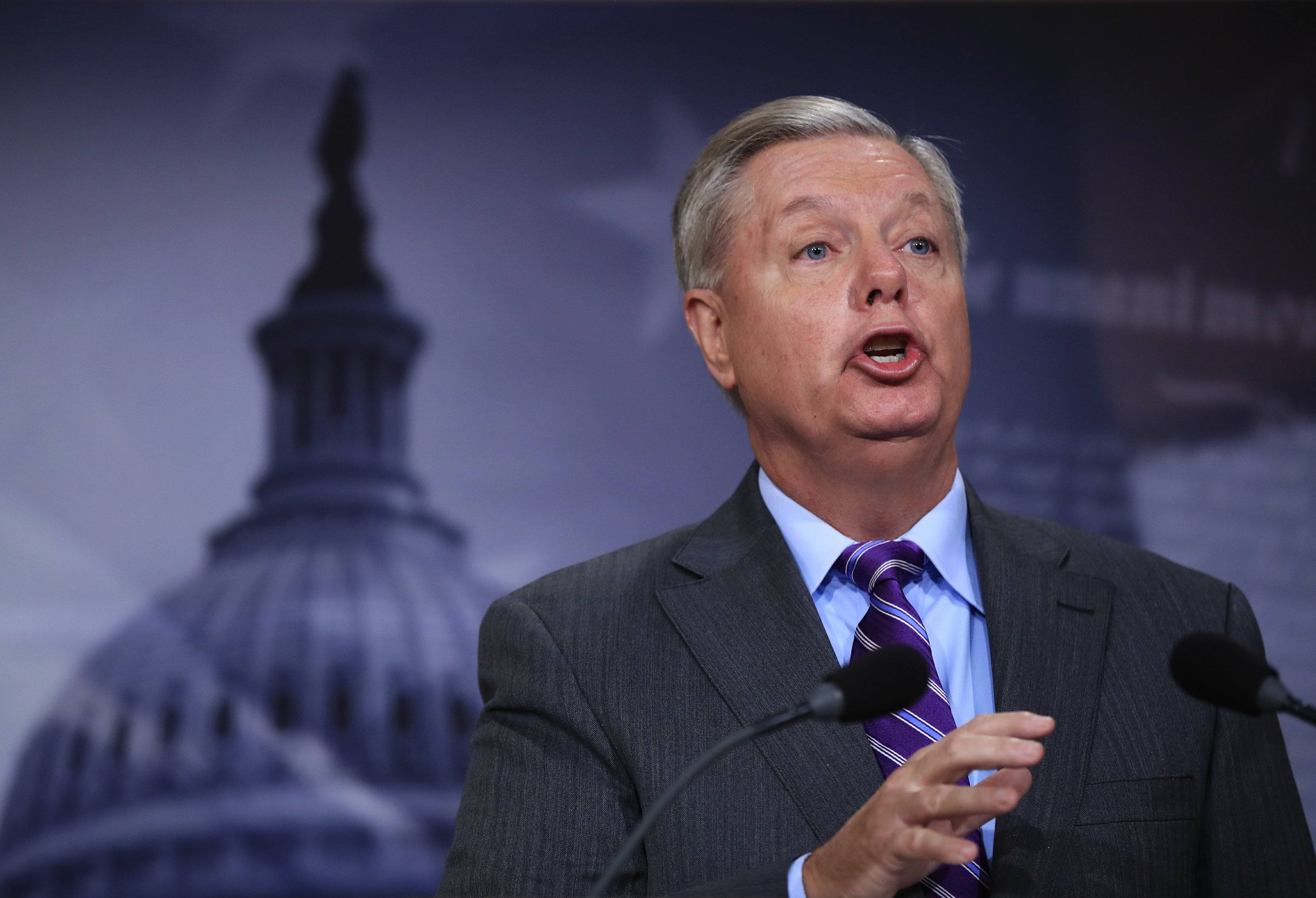 Deviating from McCain, Sen. Graham goes all in on Team Trump

COLUMBIA, S.C. (AP) — By the end, Sen. John McCain had rejected President Donald Trump. The president was so infuriated by McCain he put a biting reference to the dying Republican senator in his stump speech. Yet one man in Washington still had hope...