1/ In a sworn declaration, a third accuser said said she witnessed efforts by Brett Kavanaugh and his friend Mark Judge between 1981 and 1983 to get girls "inebriated and disorientated" so they could be "gang raped" in side rooms at house parties by a "train" of boys who were lined up and waiting for their "turn" inside the room. Julie Swetnick swore that Kavanaugh and Judge would "'spike' the 'punch' at house parties" with "drugs and/or grain alcohol," and that she witnessed Kavanaugh "being overly aggressive with girls," not taking "No" for an answer, and being "verbally abusive towards girls by making crude sexual comments" intended to demean them. In her declaration, Swetnick alleges an incident in 1982 in which she says she was the victim of a "gang rape" Kavanaugh was present for. "During the incident, I was incapacitated without my consent and unable to fight off the boys raping me," Swetnick says. "I believe I was drugged using Quaaludes or something similar placed in what I was drinking." Kavanaugh's first accuser, Christine Blasey Ford, said Judge was present when Kavanaugh allegedly sexually assaulted her 36 years ago. All 10 Democrats on the Judiciary Committee called for Trump to "immediately withdraw the nomination or order an FBI investigation into all the allegations." (New York Times / CNBC / Washington Post / Wall Street Journal / CNN / Yahoo News / ABC News)

The meeting between Prince, an influential Trump ally, and Kirill Dmitriev, the CEO of the sanctioned fund, took place on Jan. 11, 2017, at the Four Seasons Hotel in a bar overlooking the Indian Ocean. George Nader, a Lebanese-American businessman who advises the crown prince of the United Arab Emirates, was also present.

Special counsel Robert Mueller has looked into the meeting as part of his larger investigation into Russian meddling in the 2016 election. And nearly a year after the meeting, Prince told Congress his discussion with Dmitriev was just happenstance and took place “over a beer.” Prince also said he did not attend the meeting as a representative of the Trump team. 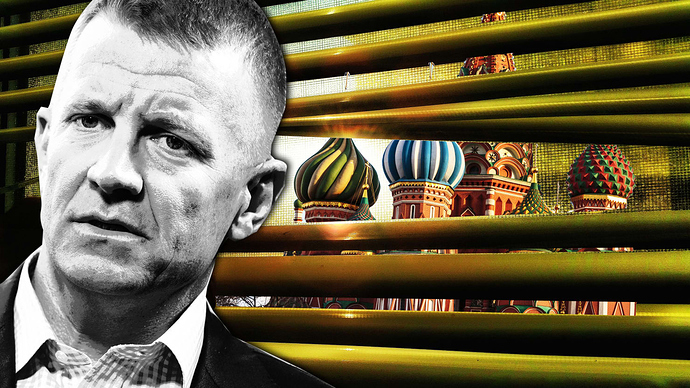 Revealed: What Erik Prince and Moscow’s Money Man Discussed in That Infamous...

Mueller’s team and congressional investigators have looked into a meeting in the Seychelles between allies of Trump and Putin. Now we have the Russian read-out of what was said.

Julie Swetnick’s sworn declaration – captured from Michael Avenatti’s Twitter account, 9/26/18. I see this is actually clearer to read in Avenatti’s tweet – so you may want to read it there instead. 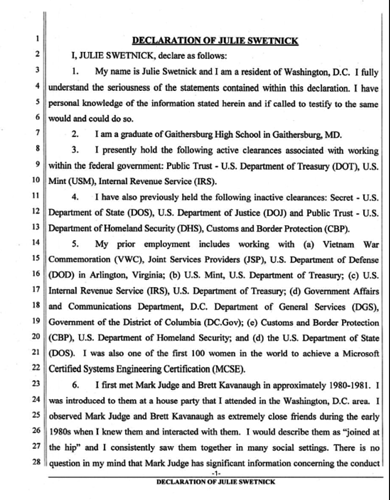 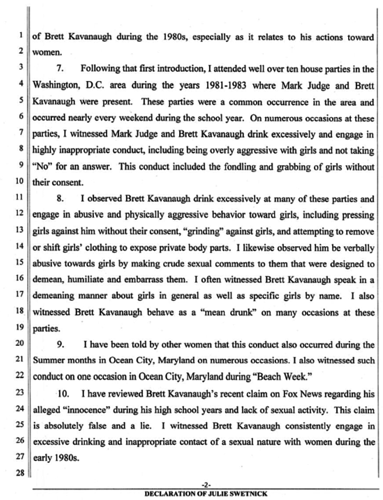 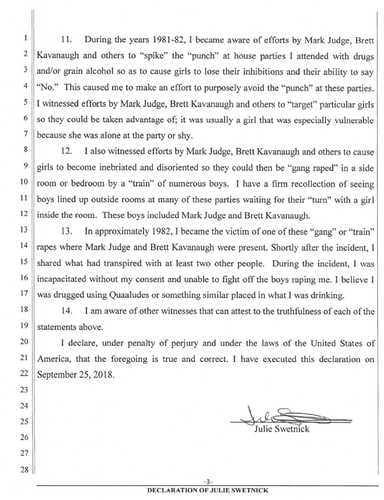 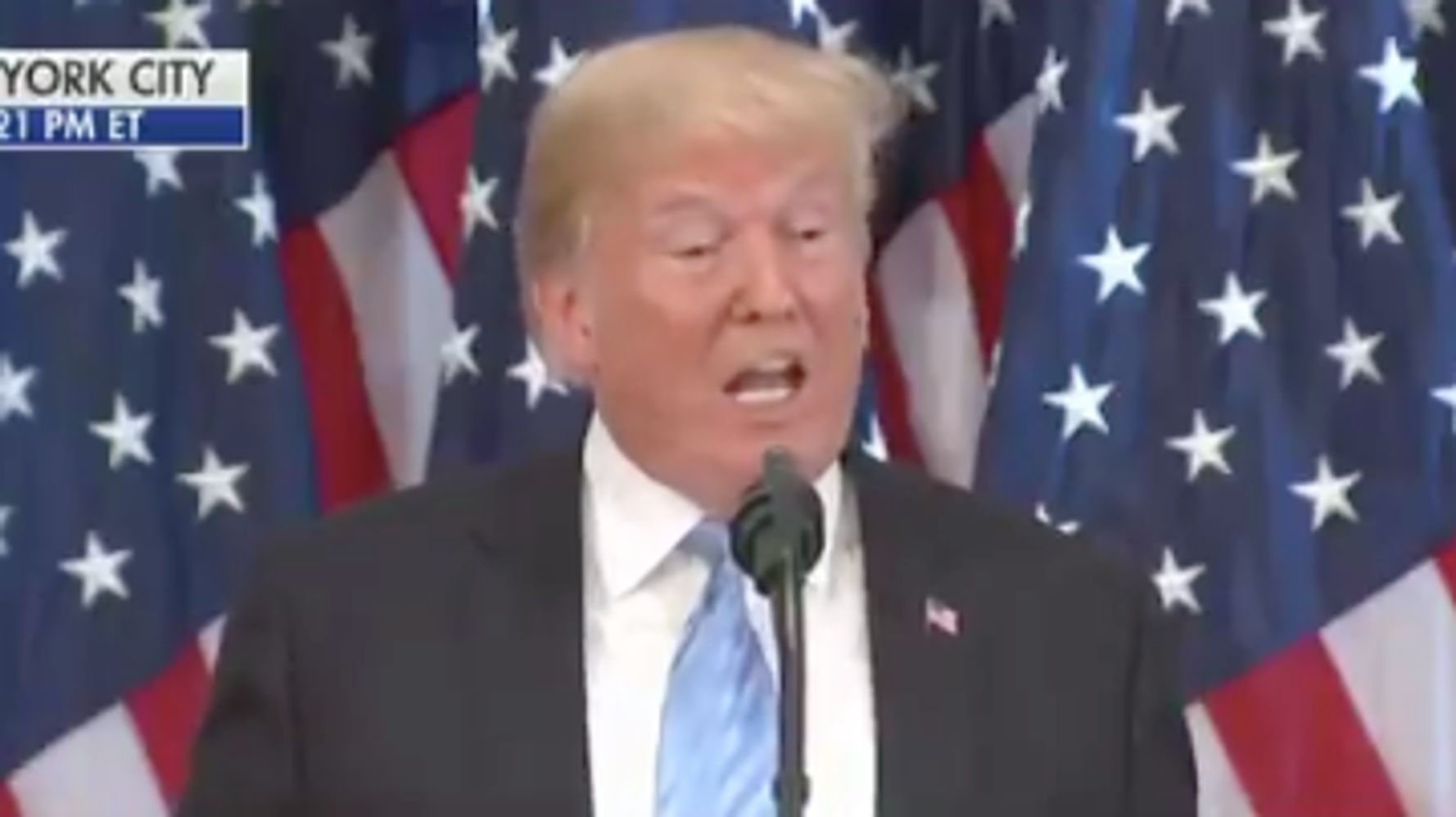 Trump Repeats Lie That Women Who Accused Him Of Sexual Misconduct Were 'Paid...

I just really have to restrain myself in making comments about the outrageously false claims Trump made this afternoon.

In an erratic, angry rant to reporters Wednesday afternoon, Trump fought back against questions asking why he doesn’t seem to believe the three women who have said Judge Kavanaugh engaged in sexual misconduct.

“I’ve been accused, I’ve been accused. I believe it was four women, you can check with Sean Hannity, you can check with Fox, because they covered it very strongly,” he said. “I was accused by four or five women who got paid a lot of money to make up stories about me. We caught them and the mainstream media refused to put it on television. They refused to even write about it. There were four women, and maybe more.

Trump was likely referring to women’s rights attorney Lisa Bloom, who set up a GoFundMe for client Jill Harth, who said in a 1997 lawsuit that Trump forced her into a bedroom at Mar-a-Lago and attempted to rape her. As Snopes points out, Harth never even wished to go public with the accusation to begin with ― she was outed by reporters in 2016. And her GoFundMe raised only $2,317.

“And the one that reported it, I believe was offered $750,000 to say bad things about me, and she’s the one that reported it,” Trump continued. “This woman is incredible. She reported it instead of taking the money. So I’ve had numerous accusations about me. I mean they made false statements about me knowing they were false. I never met them. I never met these people. And what did they do? What did they do? They took money in order to say bad things.” . . .

“I’m a very famous person,” the president reminded the country. “People want fame. They want money … It’s happened to me many times. I’ve had many false charges.” 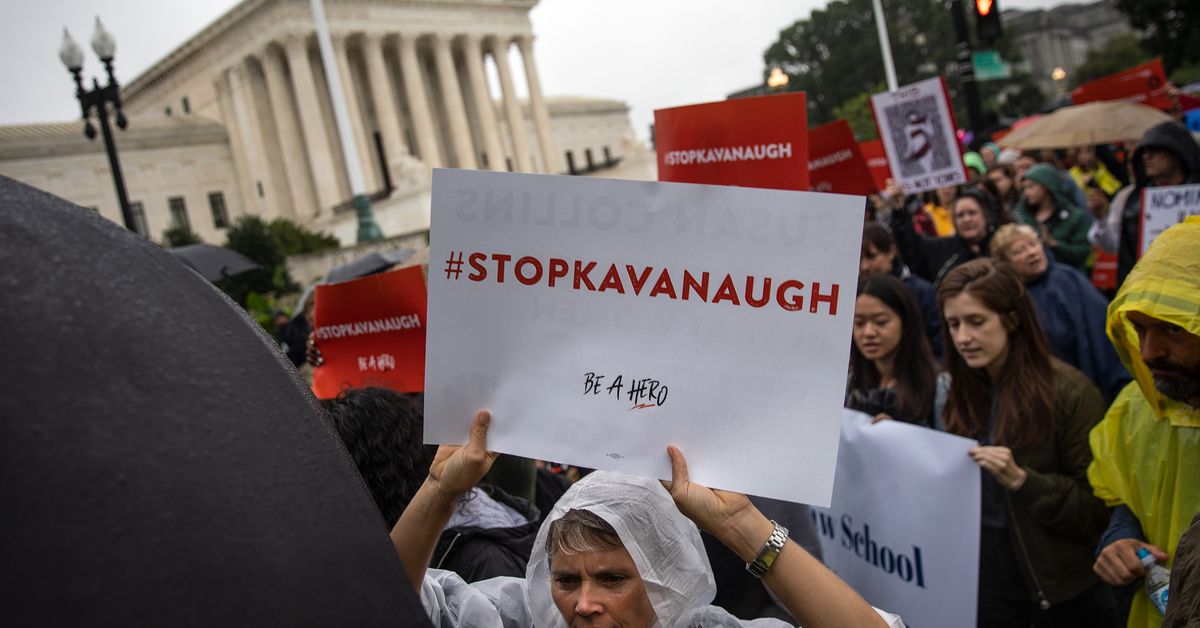 The alleged incident, subject of an anonymous letter, took place in 1998 in Washington, DC.

The Senate Judiciary Committee is investigating a fourth allegation of sexually aggressive behavior toward women by Supreme Court nominee Brett Kavanaugh, according to NBC News. Kavanaugh is alleged to have shoved a woman up against a wall “very aggressively and sexually” while he was drunk.

The fourth allegation differs from those of Christine Blasey Ford, Deborah Ramirez, and Julie Swetnick in one important way: The alleged actions took place much more recently. The previous three incidents allegedly happened in high school or college. The fourth alleged incident, which was reported to Sen. Cory Gardner (R-CO), occurred in 1998. That year, Kavanaugh turned 33, and he worked from April 27 until December 1 as an associate independent counsel under Kenneth Starr, investigating President Clinton for lying about his affair with Monica Lewinsky.

Sticking point: This is an anonymous allegation. I sure hope this witness will come forward.

Statement prior to hearing from Christine Blasey Ford

All women’s jaws (and others) have dropped in disgust at how many other accusers have made believable statements which state that Brett Kavanaugh is unfit to be on the Supreme Court. Full stop, #PullTheNominee

New: Mueller has recommended a non custodial sentence (i.e. a fine or probation) for Richard Pinedo, who “provided evidence that led to the indictment to 13 Russian nationals and 3 business entities that interfered” in the 2016 election. h/t @TomerElk

New: Mueller has recommended a non custodial sentence (i.e. a fine or probation) for Richard Pinedo, who “provided evidence that led to the indictment to 13 Russian nationals and 3 business entities that interfered in the 2016 election. h/t @TomerElk https://t.co/pzIzZQKEdW”

Richard Pinedo set up the bank account in the US for the 13 Russian nationals and the business entities that interfered.

Woman-to-woman. Sen Murkowski and Sen Feinstein talked in the basement, and then hugged.

MURKOWSKI and FEINSTEIN huddling in Capitol basement. What are they talking about?
2 Likes
dragonfly9 September 27, 2018, 2:33am #10

you gotta be kidding me

Republican senators defending Brett Kavanaugh are really stepping in it:

Sen. Cindy Hyde-Smith (R-MS) said in her maiden floor speech that sexual assault must never be taken lightly, which is why the “unproven accusations” she says have been made against Kavanaugh "are so very unjust."

Sen. Lindsey Graham (R-SC) said, “I have a difficult time believing any person would continue to go to—according to the affidavit—ten parties over a two-year period where women were routinely gang raped and not report it.”

Unbelievable! It’s so much more embarrassing when he’s on the World Stage…he is really off his rocker today, isn’t he?

Kelly having a moment at the T Presser today…Funny article on that free-range Press Conference.

Trump, like a savvy TV exec, understands that he doesn’t want his top prime-time dramas (The Kavanaugh Saga; the Rosenstein Showdown) competing against each other for top billing. My latest: https://wapo.st/2N5zmlZ 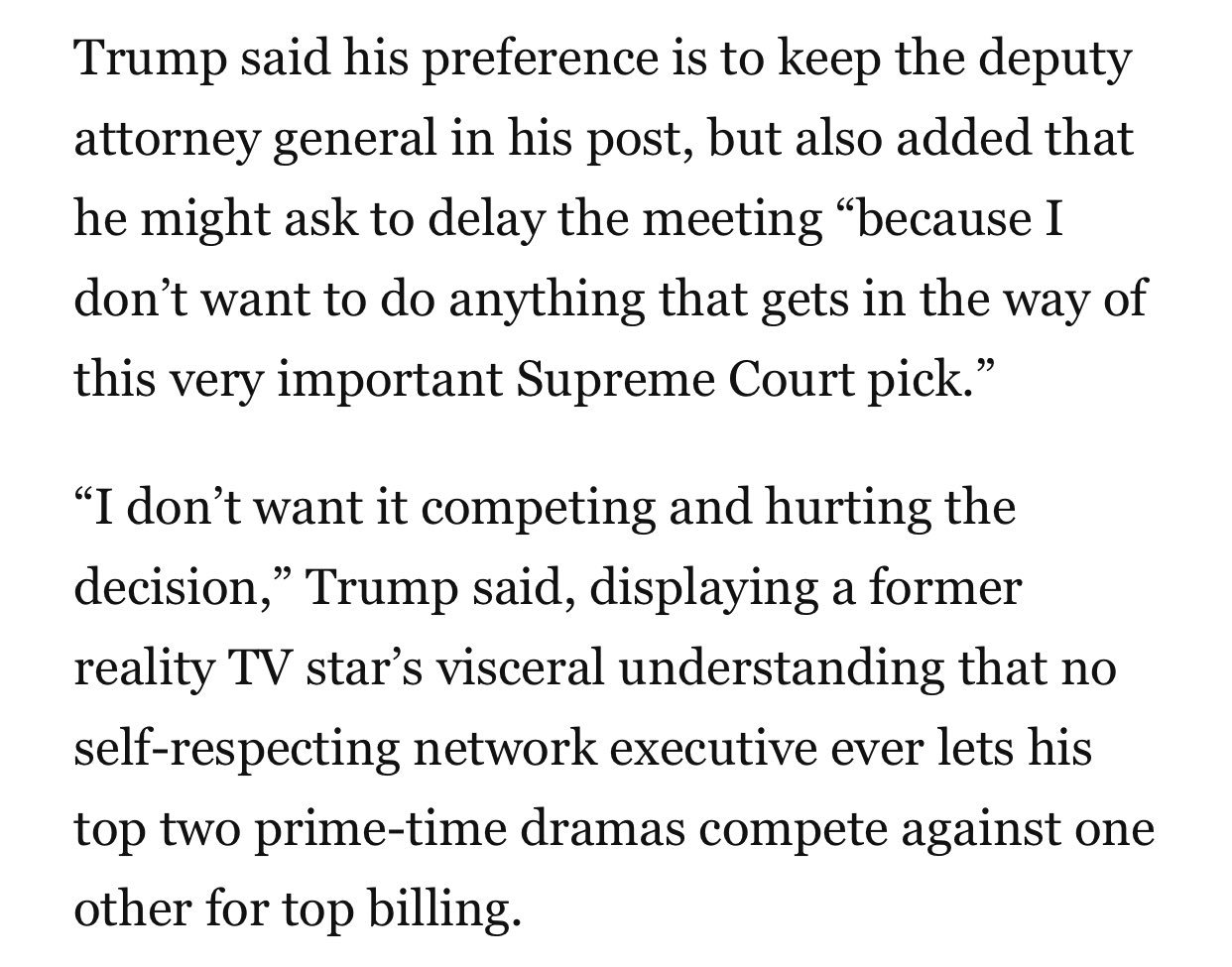 Trump, like a savvy TV exec, understands that he doesn’t want his top prime-time dramas (The Kavanaugh Saga; the Rosenstein Showdown) competing against each other for top billing. My latest: https://t.co/Jd1CtJPwsA 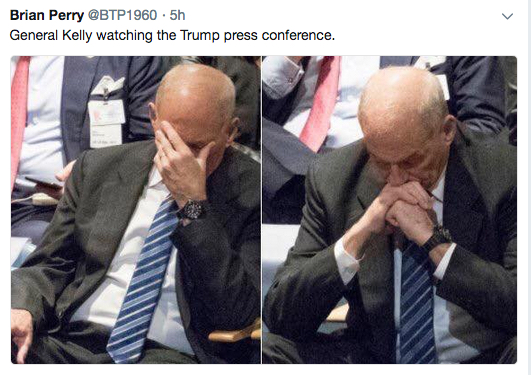 Ruslan Boshirov and Alexander Petrov, the two Russian men suspected of poisoning former spy Sergei Skripal and his daughter Yulia in England on March 4th, went on RT earlier this month to claim they were in the fitness industry and tourists in Salisbury on holiday the weekend in question.

Online investigative outlet Bellingcat and The Insider uncovered the truth:

The suspect using the cover identity of “Ruslan Boshirov” is in fact Colonel Anatoliy Chepiga, a highly decorated GRU officer bestowed with Russia’s highest state award, Hero of the Russian Federation. Following Bellingcat’s own identification, multiple sources familiar with the person and/or the investigation have confirmed the suspect’s identity.

This finding eliminates any remaining doubt that the two suspects in the Novichok poisonings were in fact Russian officers operating on a clandestine government mission.

While civilians in Russia can generally own more than one passport, no civilian – or even an intelligence service officer on a personal trip – can cross the state border under a fake identity. The discovery also highlights the extent of the effort – and public diplomacy risk – Russia has taken to protect the identities of the officers. President Putin publicly vouched that “Boshirov” and “Petrov” are civilians. As it is established practice that the awards Hero of the Russian Federation are handed out by the Russian president personally, it is highly likely that Vladimir Putin would have been familiar with the identity of Colonel Chepiga, given that only a handful of officers receive this award each year.

Bellingcat has contacted confidentially a former Russian military officer of similar rank as Colonel Chepiga, in order to receive a reaction to what we found. The source, speaking on condition of anonymity, expressed surprise that at least one of the operatives engaged in the operation in Salisbury had the rank of colonel. Even more surprising was the suspects’ prior award of the highest military recognition.

In our source’s words, an operation of this sort would have typically required a lower-ranked, “field operative” with a military rank of “no higher than captain.” The source further surmised that to send a highly decorated colonel back to a field job would be highly extraordinary, and would imply that “the job was ordered at the highest level.” 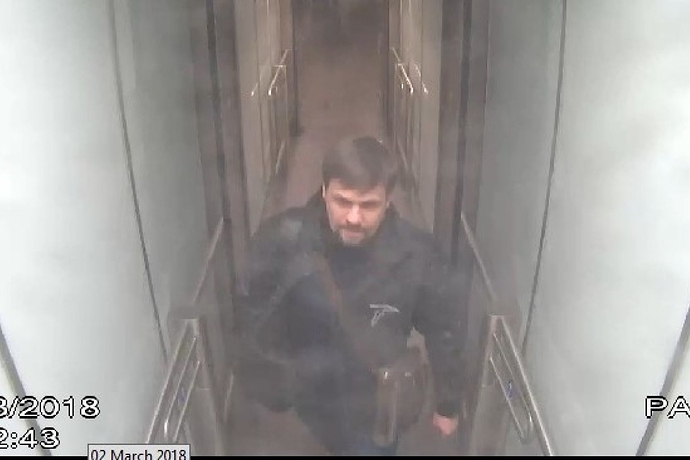 And he’s an asshole. Through and through. I hate him.

Day 616 - Hearing with Dr. Christine Blasey Ford and what she is confronting.

It is so difficult to watch this set up…revealing the harshest memory and having to confirm the utter horror of it.

Poem on carrying a trauma memory

The Consequences Of Unlocking Memories.

Smile and wave, numb it all away.
Paving over the unlocked pain.
Tried to speed through the terrain.
Only feelings of shame,
don’t know where to fit.
Carried too long my delusion and illusion.
Repression came out in a bang too overwhelming to release.
Bringing out a rotten feast.
Polar opposite distanced from my rosy self.
Slave to the chaos of my mind,
how can a relative be so unkind.
Ready to find my head back in clouds,
back to the dormant town.
Not to be this bounded and controlled by building eruptions.
Clear the surroundings…
Oh beware!
Sorry for my presence has made you aware!
That life is not always fair.
I wish I never had this clarity and remembered the barbarity.