1/ Michael Cohen was sentenced to three years in prison for tax evasion, violating campaign finance laws, lying to banks and to Congress. Cohen apologized for his conduct, admitting that he had arranged the payments to Stormy Daniels and Karen McDougal "for the principal purpose of influencing the election" for president in 2016, and took "full responsibility" for covering up the "dirty deeds" out of "blind loyalty" to Trump. Cohen pleaded guilty in two separate cases: One brought by Robert Mueller over his lies to Congress. The other was brought by the southern district of New York over tax and bank fraud, and campaign finance violations. Cohen blamed Trump for his "path of darkness." In addition to the prison time, Cohen will forfeit $500,000 in assets and pay $1.393 million in restitution. (New York Times / Washington Post / CNN / Politico / The Guardian / NBC News / CBS News / ABC News)

Currying favor with Bahrain and getting contracts, Giuliani does do some double dipping. He’s trading in on his association with T.

WASHINGTON — The special counsel’s investigation was grinding relentlessly onward, with President Trump’s former national security adviser pleading for leniency in his case and his former fixer about to be sentenced for his crimes. But Mr. Trump’s personal lawyer, Rudolph W. Giuliani, was in Manama, Bahrain, on Tuesday, meeting with the king and the interior minister of an important United States ally in the Middle East.

The government-run Bahrain News Agency featured a photo of Mr. Giuliani meeting in a royal palace with King Hamad bin Isa al-Khalifa. The story said the king discussed “Bahraini-U. S. relations” with Mr. Giuliani, who was described as leading a “high-level U.S. delegation.”

But Mr. Giuliani was not in Bahrain, a country with a record of human rights abuses, on official business. He was there to seek a lucrative security consulting contract with the government.

The trip was part of a concerted push Mr. Giuliani has undertaken in the last few weeks to win business from governments around the world — including in Africa and South America — for a firm he owns called Giuliani Security and Safety.

But as his visit to Bahrain showed, Mr. Giuliani’s various interests can lead to confusion over the nature of his role. And foreign officials who have reason to want to get in or stay in the Trump administration’s good graces could view hiring Mr. Giuliani’s firm as a good way of doing so, according to ethics watchdogs.

Reached in Bahrain on Tuesday night, Mr. Giuliani said that the efforts are completely unrelated to — and do not capitalize on — his representation of the president. 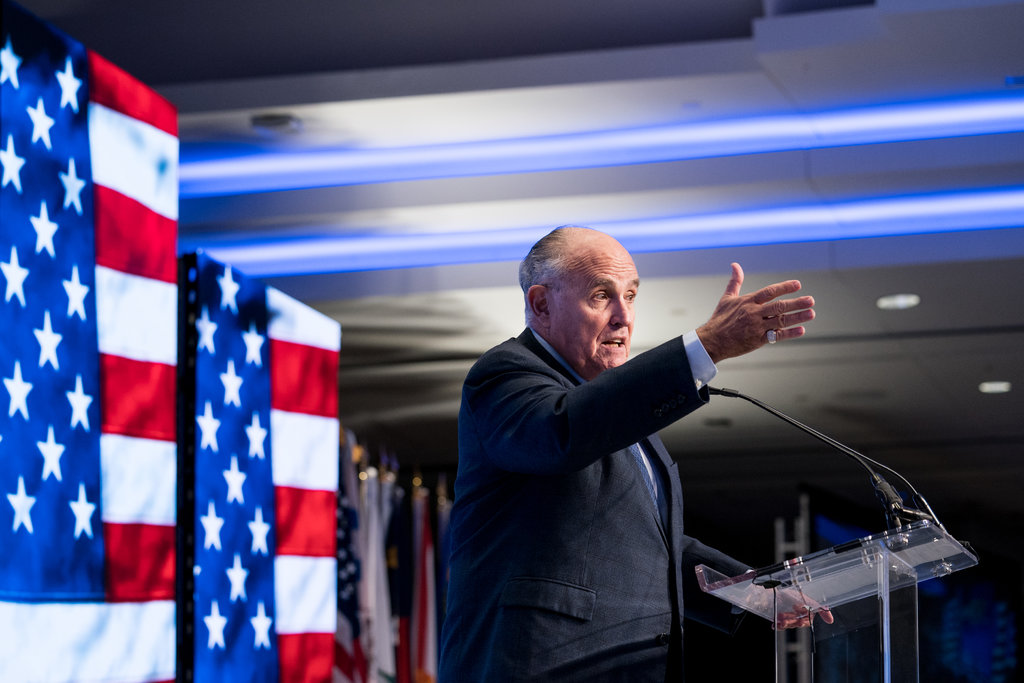 SCOOP: While TRUMP was facing mounting pressure from prosecutors, @RUDYGIULIANI was in Bahrain on Tues, meeting with the King & other officials in an effort to win a lucrative security consulting contract. He is also pursuing work in Africa & South America https://t.co/DojexGI8WN
3 Likes
Day 727
🔍 All things Mueller - What we know he has on Trump 'n Co
Keaton_James December 13, 2018, 1:50am #3 More good news in the ongoing state-level investigations of Trump, his family, his campaign, and his company. Barbara Underwood, the current New York Attorney General, pulled no punches in going after Trump – it was hard to imagine that her successor could be any tougher on the President, but . . . voilà! Here we are!

Letitia James, the new NY AG, doesn’t take office until next month, but she’s already coming down on Trump like a ton of bricks. The fact that she’s sounding the charge before she even crests the hill shows how deadly serious she is about holding Trump and his whole motley crew accountable. There’s no place to hide.

New York Attorney Gen.-elect Letitia James says she plans to launch sweeping investigations into President Donald Trump, his family and “anyone” in his circle who may have violated the law once she settles into her new job next month.

"We will use every area of the law to investigate President Trump and his business transactions and that of his family as well," James, a Democrat, told NBC News in her first extensive interview since she was elected last month.

James outlined some of the probes she intends to pursue with regard to the president, his businesses and his family members. They include:

“We want to investigate anyone in his orbit who has, in fact, violated the law,” said James, who was endorsed by New York Gov. Andrew Cuomo…

She’s also enlisting help from some prosecutorial heavy hitters, like former U.S. Attorney General Loretta Lynch, as a part of her transition to help her identify important hires for her office with an eye on bringing in experts for its Trump-related investigations…

For her part, James said she thinks Mueller’s “doing an excellent job.”

"I think he’s closing in on this president," she said, "and his days are going to be coming to an end shortly."

A shoutout to currentstatus.io for this timely link.