1/ Trump intends to sign the bipartisan border security deal and avoid another partial government shutdown. Trump said he was "not happy" with the deal and suggested that he'd find "other methods" for financing his border wall by "moving things around" in the budget from "far less important areas" to build his wall without congressional approval. The agreement includes $1.375 billion for 55 miles of physical border barriers – short of the $5.7 billion Trump wanted for his wall – and is less than the $1.6 billion included in a Senate package last year. Republicans and administration officials, meanwhile, have signaled that Trump will sign the measure and then immediately use his executive authority to redirect federal money to fund the additional border barriers. The agreement must be signed into law in both chambers of Congress and signed by Trump before the end of the week in order to avoid another shutdown. (CNN) / Bloomberg / NBC News / Wall Street Journal / New York Times / Washington Post / CNBC)

4/ A Manafort-linked super PAC failed to report a $1 million contribution it received just before the 2016 election . The Federal Election Commission has asked the Rebuilding America Now PAC for more information about the contribution, which was disclosed in an amended filing two years after the fact. Mueller, meanwhile, is reportedly investigating whether Rebuilding America Now illegally received foreign funds. (Talking Points Memo)

Good story. Manafort’s Rebuilding America Now PAC misplaced a million dollars and the FEC wants to know what happened— Mueller is investigating to see if this was one of the schemes Manafort lied about. A super PAC closely linked to Paul Manafort is facing FEC scrutiny over why it failed to report a $1...

In a Tuesday letter, the Federal Election Commission asked the Rebuilding America Now PAC for more information about the contribution, which the PAC first disclosed in an amended report in November 2018—some two years after the fact.

The FEC letter raises new questions about the murky financial operations of the PAC, which was operated by two Manafort deputies. Special counsel Robert Mueller is reportedly investigating whether Rebuilding America Now illegally received foreign funds and was connected to a scheme that Manafort allegedly lied about while purportedly cooperating with Mueller.

“It’s a significant amount of money,” former Federal Election Commission general counsel Larry Noble told TPM. “Missing $1 million for two years with an ongoing PAC will most likely – or should – end up in enforcement. There should be some penalty attached to the failure to report $1 million.”

Noble added that the PAC would have had to reconcile its bank statements at the end of each year, and it was unclear why that would not have triggered an amended filing to the FEC.

“Please amend your report or provide clarifying information as to why this activity was not disclosed on your original report,” the FEC wrote in the letter to the PAC.

Speak of the devil. Late Breaking, Manafort lied to Mueller!

Judge Amy Berman Jackson said that Manafort "intentionally made multiple false statements to the FBI, the (office of special counsel) and the grand jury concerning matters that were material to the investigation."

The issue was the subject of a closed-door hearing Wednesday afternoon.

What more hell has T brought?? Dismantling significantly a task force which could protect elections???

Two teams of federal officials assembled to fight foreign election interference are being dramatically downsized, according to three current and former Department of Homeland Security officials. And now, those sources say they fear the department won’t prepare adequately for election threats in 2020.

“The clear assessment from the intelligence community is that 2020 is going to be the perfect storm,” said a DHS official familiar with the teams. “We know Russia is going to be engaged. Other state actors have seen the success of Russia and realize the value of disinformation operations. So it’s very curious why the task forces were demoted in the bureaucracy and the leadership has not committed resources to prepare for the 2020 election.”

‘It’s very curious why the leadership has not committed resources to prepare for the 2020 election,’ one Homeland Security official tells The Daily Beast. 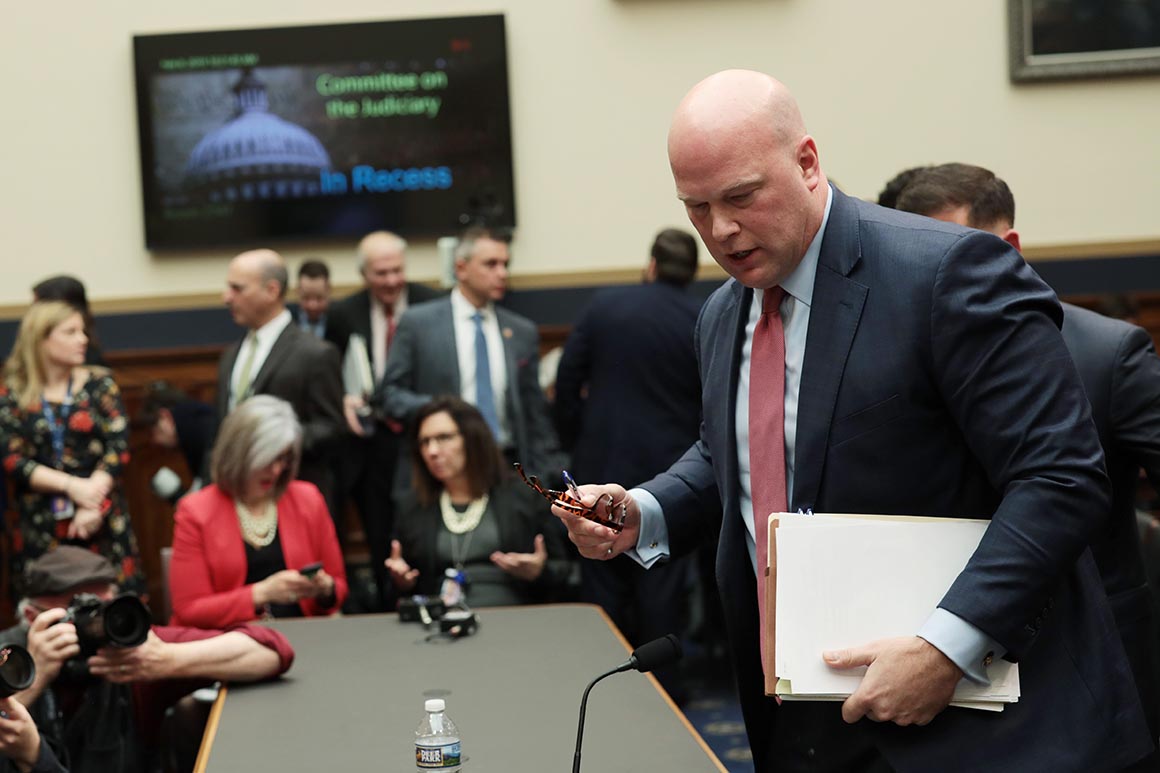 “You repeatedly refused to offer clear responses regarding your communications with the White House,” the House Judiciary Committee chairman writes.

Yes! It’s time to play hard ball and the newly-in-charge Democrats are proving up to the task.

When this news first dropped, I didn’t give it much attention, but now I’m thinking it’s a true bombshell. Nadler all but states, “We know you lied to us and we have evidence to prove it.”

IMHO Whitaker should be fair game for subpoenas even after he steps down as Acting AG because the communications he had while in that position may speak to possible obstruction of justice allegations against Trump.

Rep. Jerrold Nadler, chairman of the House Judiciary Committee, pressed acting Attorney General Matthew Whitaker on Wednesday to clarify his recent testimony, after Nadler and his panel found that Whitaker’s responses were “unsatisfactory, incomplete or contradicted by other evidence.”

“You repeatedly refused to offer clear responses regarding your communications with the White House, and you were inconsistent in your application of the Department’s policy related to the discussion of ongoing investigations,” Nadler wrote in his letter, referring to the Justice Department.

The New York Democrat’s request includes the possibility that the Judiciary Committee could have direct evidence indicating that Whitaker lied during his testimony.

This point is specifically addressed when Nadler writes of Whitaker’s answers to questions about whether or not he spoke with President Donald Trump about the decision by Michael Cohen, the president’s former longtime lawyer and fixer, to plead guilty in federal court to lying to Congress and violating campaign finance law by arranging hush money payments on Trump’s behalf.

“Your testimony on this topic is directly contradicted by several media reports,” Nadler writes of Whitaker’s answers to questions about Trump and Cohen.

The Judiciary Committee, Nadler continues, “has identified several individuals with direct knowledge of the phone calls you denied receiving from the White House.”

The full letter is here – it’s a compelling read.