1/ Paul Manafort "repeatedly and brazenly" broke the law and the "crimes he engaged in while on bail were not minor; they went to the heart of the criminal justice system," according Robert Mueller's 800-page court filing. Manafort's sentence should reflect the "gravity of his conduct," prosecutors wrote in the unsealed filing, which includes a note from Mueller indicating that federal sentencing guidelines suggest Manafort should receive a sentence of 17 to 22 years in prison. Mueller also said Manafort engaged in a "bold" string of criminal actions and an extensive pattern of deceit that "remarkably went unabated even after indictment." (CNBC / Washington Post / Associated Press / Axios / ABC News / CNN) 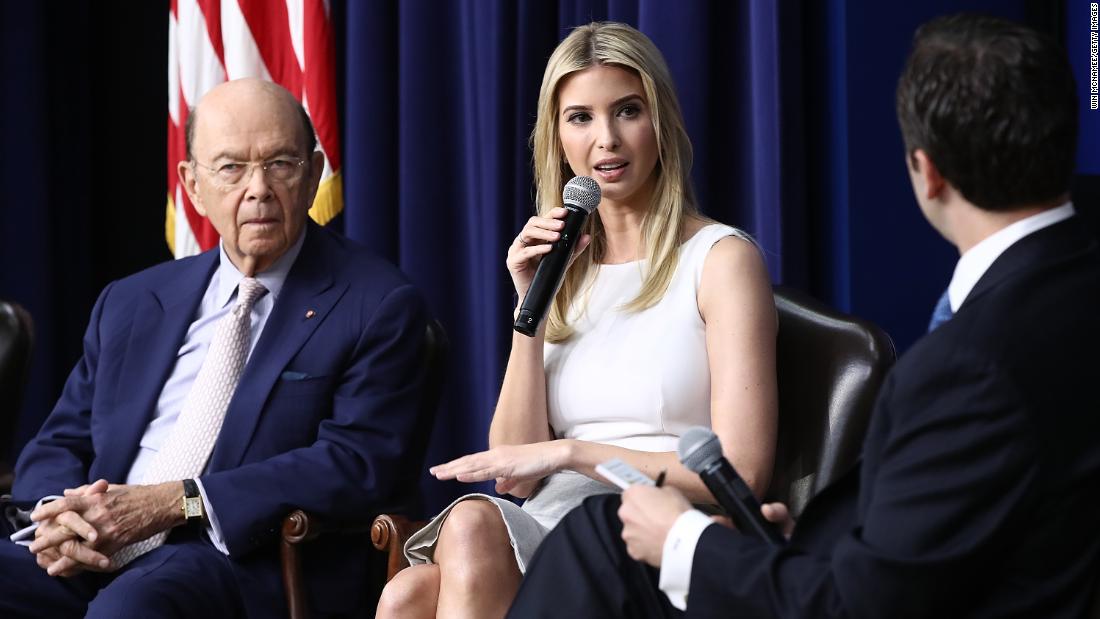 During an address to US governors Monday morning, President Donald Trump discussed the need for training programs and claimed that his daughter Ivanka had "created millions of jobs." He followed up by discussing the Pledge to America's Workers, an...

Lawyers for former Trump campaign chairman Paul Manafort asked a federal judge in Washington on Monday to impose a prison term “significantly below” the statutory 10-year maximum, saying he was remorseful for his misdeeds and facing deteriorating health.

“This case is not about murder, drug cartels, organized crime, the Madoff Ponzi scheme or the collapse of Enron,” they wrote. 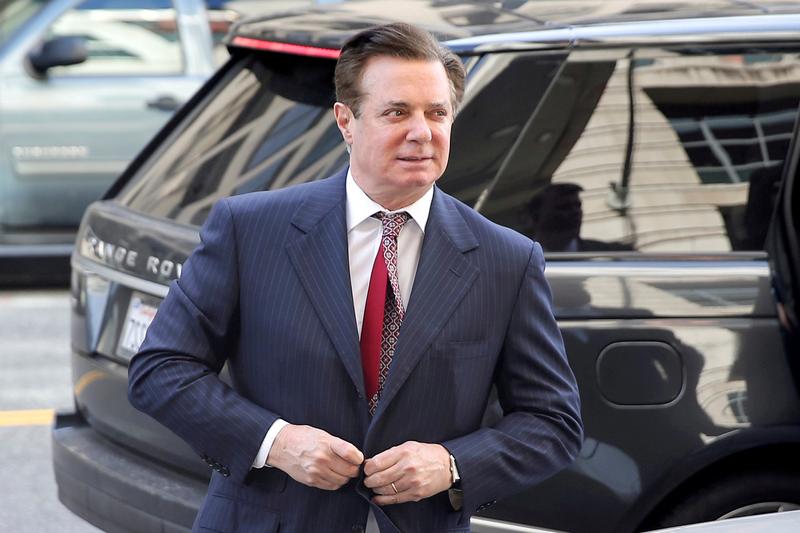 Lawyers for former Trump campaign chairman Paul Manafort asked a federal judge in Washington on Monday to impose a prison term "significantly below" the statutory 10-year maximum, saying he was remorseful for his misdeeds and facing deteriorating...

The House Judiciary Committee believes it has evidence that President Trump asked Matthew Whitaker, at the time the acting attorney general, whether Manhattan U.S. attorney Geoffrey Berman could regain control of his office’s investigation into Mr. Trump’s former lawyer and his real-estate business, according to people familiar with the matter.

Mr. Berman, a former law partner of Trump attorney Rudy Giuliani who in 2016 donated to the Trump campaign and whom the president personally interviewed for the U.S. attorney job, last year had recused himself from involvement in the matter. He didn’t give a reason, but legal experts said his interim status at the time the probe began would have made his involvement appear improper. The investigation began as a probe of the business dealings of Michael Cohen, Mr. Trump’s former lawyer, and has broadened to examine the Trump Organization.

Mr. Cohen on Wednesday is set to deliver public testimony for the first time before the House Oversight Committee, in which he is expected to talk about his decade of working for Mr. Trump and about the hush-money payments he arranged during the 2016 campaign to women who alleged sexual encounters with Mr. Trump. Mr. Cohen has pleaded guilty to charges including campaign-finance violations and lying to Congress, and last year he was sentenced to three years in prison. 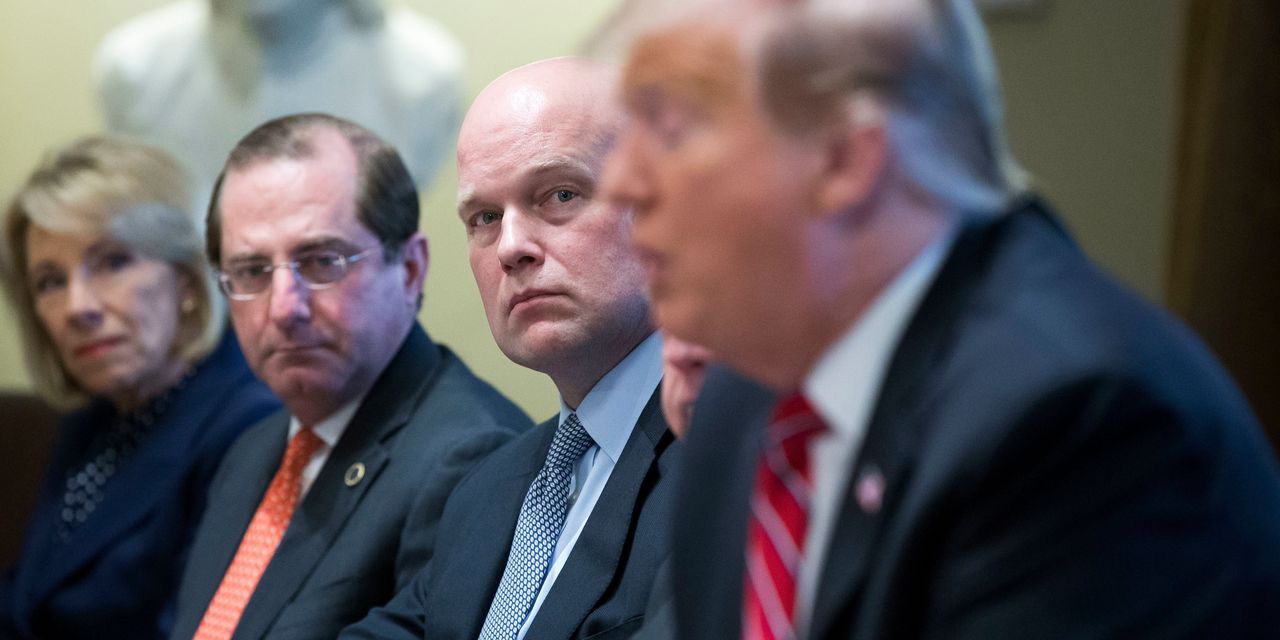 A House panel believes it has evidence that President Trump asked Matthew Whitaker, at the time the acting attorney general, whether Manhattan U.S. attorney Geoffrey Berman could regain control of his office’s investigation into Mr....

the House is expected to vote on a measure to block Trump’s declaration. Trump, meanwhile, warned Republican senators to not “get led down the path of weak and ineffective Border Security.”

Looks like this veto will pass in the House, as there is a clear Democratic majority to stop this Emergency Declaration, and several R Congress members joining in that veto as well. The question of course will be in the Republican Senate, and whether there is fallout from that group.

Senate Majority leader Mitch McConnell (R-KY) is following T’s requests and not challenging this, however a few R Senators will be vetoing it.

You wonder about what Sen Manchin (D-WV) will do, as he usually votes pro-T.

The outcome was less assured in the Senate, which will be required — under provisions of the National Emergencies Act — to take up the legislation within weeks of House passage. If all Senate Democrats vote for the disapproval resolution, only four Republican votes would be needed to ensure passage, since just a simple majority vote is required.

With numerous Republican senators voicing concerns or outright opposition to Trump’s national emergency declaration, the disapproval resolution was widely expected to pass the Senate — though probably without securing the two-thirds majority that would be needed for a veto override. Senators could also potentially vote to amend the resolution, which could complicate its path to passage.

Some of these same Republicans argued Monday that the situation is different now, because Trump is relying on a federal law that allows him to declare a national emergency and because, they said, evidence of an emergency was plentiful — even though border apprehensions are at their lowest levels in decades. Republican lawmakers have been reluctant throughout Trump’s presidency to challenge him outright, given the popularity he retains with Republican voters, and his national emergency declaration did not appear to have changed that.

But not all Republicans were ready to support Trump. Sen. Susan Collins (R-Maine) reiterated her intention to vote for the disapproval resolution, and Sen. Lisa Murkowski (R-Alaska) suggested in an interview with an Anchorage television station over the weekend that she would probably do the same.

On Monday, Sen. Thom Tillis (R-N.C.), who is up for reelection in a presidential battleground state, joined them, writing in an opinion piece for The Washington Post: “It is my responsibility to be a steward of the Article I branch, to preserve the separation of powers and to curb the kind of executive overreach that Congress has allowed to fester for the better part of the past century. I stood by that principle during the Obama administration, and I stand by it now.”

Senate Majority Leader Mitch McConnell (R-Ky.) had cautioned Trump beforehand about the possibility that an emergency declaration would result in a vote of disapproval that would force him to issue the first veto of his presidency. But McConnell ultimately agreed to support the declaration as Congress negotiated its way out of another potential government shutdown earlier this month. Resolution is expected to pass in the chamber, but Republicans want to be sure the margin isn’t veto-proof.

Here’s yet another case of pay-to-play in plain sight. Since Trump has not divested himself of his hotels, it’s easy for organizations to bribe him – just throw business his way. It’s amazing that our nation is tolerating this – the Republicans have been enabling it because Trump is fulfilling their agenda.

Historically, the Community Financial Services Association of America (CFSA), a trade group that represents and lobbies on behalf of payday loan companies, has held its annual conference in California during odd-numbered years. But this year, the...

Historically, the Community Financial Services Association of America (CFSA), a trade group that represents and lobbies on behalf of payday loan companies, has held its annual conference in California during odd-numbered years. But this year, the organization plans to host its 2019 event at Donald Trump’s golf resort in Doral.

Last year, when the CFSA held its conference at Trump National Doral Miami for the first time, the industry’s bigwigs were actively lobbying the administration to undo Obama-era consumer protection rules that adversely affected payday loan companies. Critics, including Hamlin, said the arrangement gave the appearance of pay-to-play.

"The payday lenders are taking money they have stolen from hardworking families and giving it to the president to make sure he does right by them," Hamlin told New Times last year.

Almost on cue, the Trump administration responded in kind. Earlier this month, the federal Consumer Financial Protection Bureau announced plans to roll back the rules, which would have required payday lenders to verify a borrower’s ability to repay the loan before handing out a cash advance.

Michael Cohen is in closed door testimony today and Thurs, but on Wednesday he will be available to see when he speaks with the House Oversight Committee. This is Cohen’s moment to publicly humiliate T, as has been done to him, and reveal waaaay too many details for T’s liking. Tisk, tisk.

Buckle up - but take notes

We expect a LOT of fireworks

will be none too pleased.

Michael Cohen is prepared to share who signed the $35,000 monthly checks he received in reimbursement for his hush-money payments to Stormy Daniels, according to a person with knowledge of his upcoming congressional testimony. Cohen is expected to bring documentation revealing who signed the checks, according to that source.

A source says the ex Trump lawyer is ready to tell Congress who reimbursed him for the infamous ‘hush-money’ payments. And he may bring the documents to prove it.

Witness tampering from the Republican Congressman - Rep Matt Gaetz, who is a rabid T supporter.

Congressman, how is this NOT meant to be threatening to a congressional witness? Are you trying to tamper with a witness? https://t.co/h3WU7rTjmX