1/ Attorney General William Barr assembled a team to examine the origins of the counterintelligence investigation into the Trump campaign's possible ties to Russia. Barr is pursuing allegations by Republican lawmakers of anti-Trump bias at the Justice Department and FBI. Robert Mueller took over the counterintelligence investigation when he was appointed special counsel. Separately, the Justice Department's inspector general is reviewing whether the FBI and federal prosecutors abused their authority when obtaining FISA warrants to surveil Trump campaign adviser Carter Page. (Bloomberg / Wall Street Journal)

Barr’s testimony in the Senate Appropriations Committee is riveting - in that Barr stand firm on what he believes, which conveniently aligns with the T administration.

He talks about the ‘unauthorized’ investigation and terms it as “spying” on Candidate T.

“I think spying on a political campaign is a big deal,” Mr. Barr said, adding that he believed “spying did occur.” Mr. Trump and his allies have accused the F.B.I. and other government officials of abusing their power and cooking up the Russia investigation to sabotage the president.

“I am not suggesting that those rules were violated, but I think it’s important to look at them,” Mr. Barr said. Later he said he wanted to ensure that there was no “unauthorized surveillance.”

Just now in his testimony 12:59 EST, Barr states
“I am not saying improper surveillance occurred, but I want to look into it.”

He has a few questions from Sen Feinstein about whether the Atty General should uphold ‘big’ laws that the Supreme Court has upheld - see ACA, and Barr says that he feels that many states do not like ACA and therefore it should be struck down. 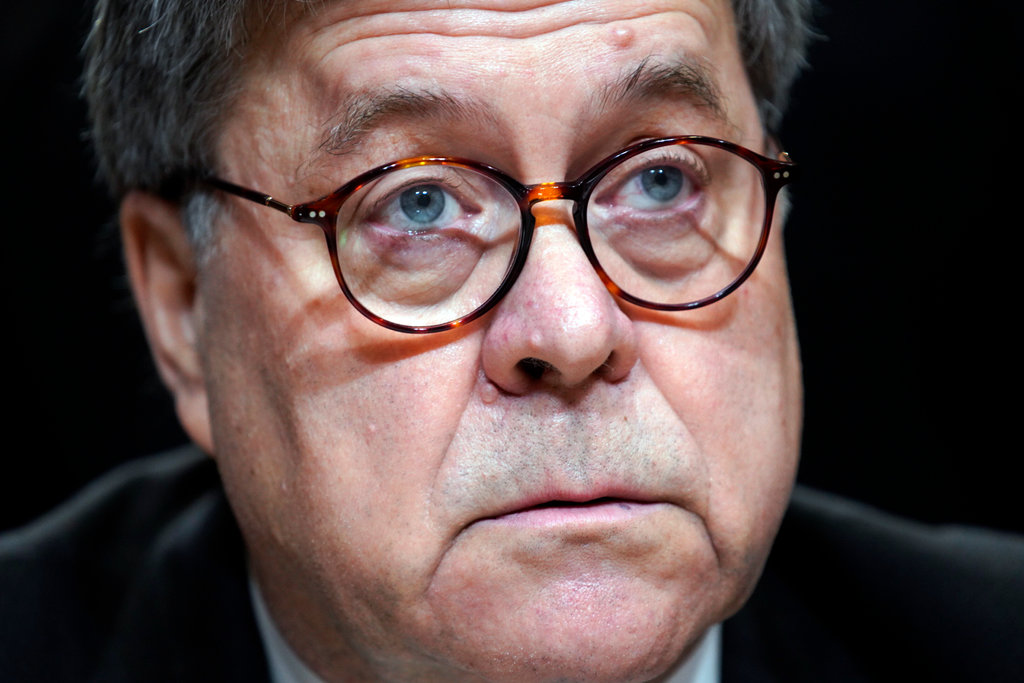 The attorney general told lawmakers he would look into whether any “spying” on the Trump campaign was improper, and he hoped the redacted Mueller report would be released “next week.” 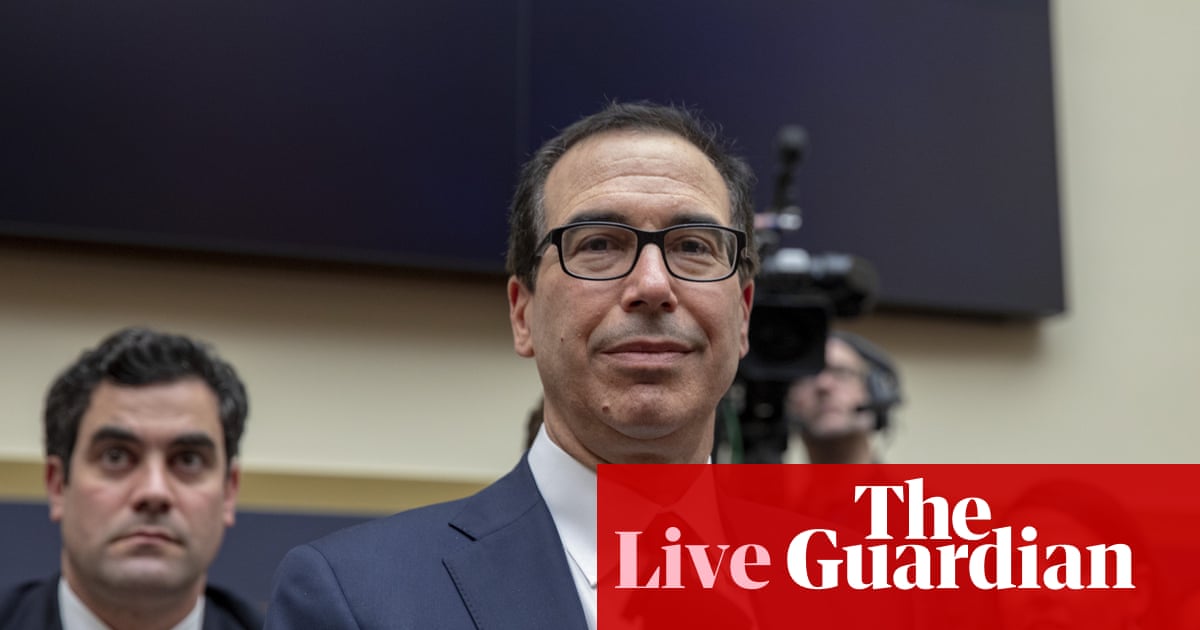 This is what the new Democratic Congress which hopes to stop - abolition of Net Neutrality. It is going to get stopped by the R’s and WH. Our new normal…

House lawmakers on Wednesday approved a Democrat-backed bill that would restore rules requiring AT&T, Verizon and other Internet providers to treat all Web traffic equally, marking an early step toward reversing one of the most significant deregulatory moves of the Trump era.

But the net neutrality measure is likely to stall from here, given strong Republican opposition in the GOP-controlled Senate and the White House, where aides to President Trump this week recommended that he veto the legislation if it ever reaches his desk.

The House’s proposal, which passed by a vote of 232-190, would reinstate federal regulations that had banned AT&T, Verizon and other broadband providers from blocking or slowing down customers’ access to websites. Adopted in 2015 during the Obama administration, these net neutrality protections had the backing of tech giants and startups as well as consumer advocacy groups, which together argued that strong federal open Internet protections were necessary to preserve competition and allow consumers unfettered access to movies, music and other content of their choice. Net neutrality bill sails through the House but faces an uncertain political...

House lawmakers on Wednesday approved a Democrat-backed bill that would restore rules requiring AT&T, Verizon and other Internet providers to treat all Web traffic equally, marking an early step toward reversing one of the most significant...

More damning evidence that T was fully aware and directed hush money be given to the ladies who were involved with him. Now what?

The Manhattan U.S. attorney’s office has gathered more evidence than previously known in its criminal investigation of hush payments to two women who alleged affairs with Donald Trump, including from members of the president’s inner circle.

They also spoke to Keith Schiller, Mr. Trump’s former security chief. Investigators learned of calls between Mr. Schiller and David Pecker, chief executive of the National Enquirer’s publisher, which has admitted it paid $150,000 to a former Playboy model on Mr. Trump’s behalf to keep her story under wraps.

In addition, investigators possess a recorded phone conversation between Mr. Trump’s former lawyer Michael Cohen and a lawyer who represented the two women. 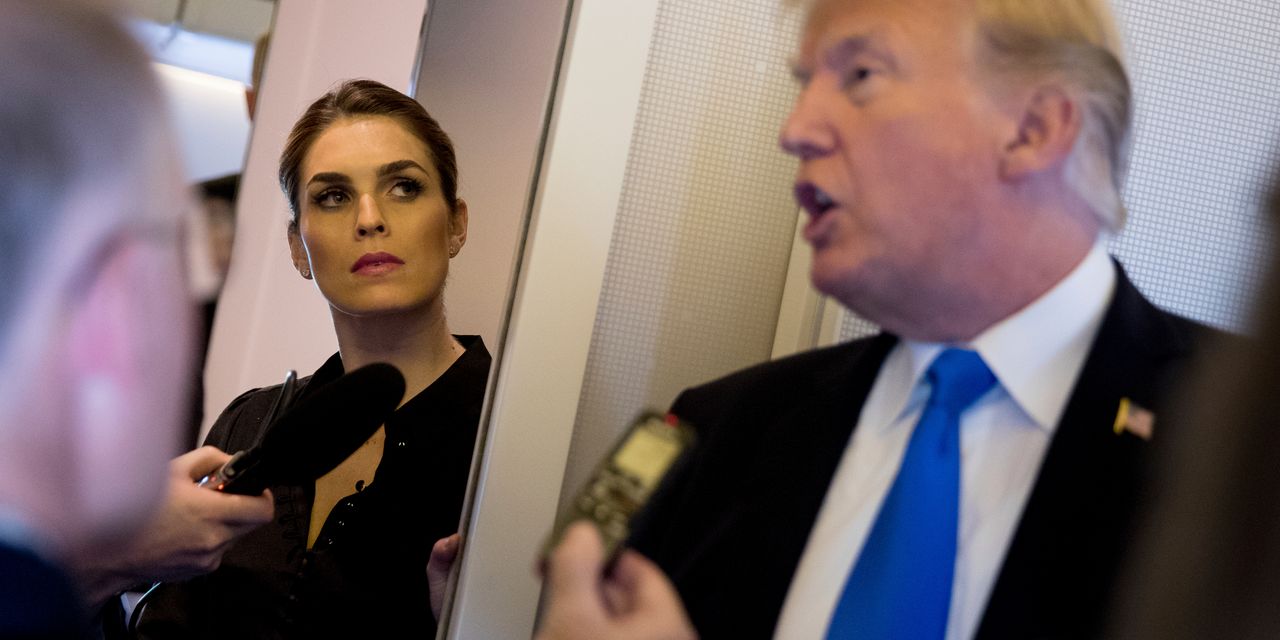 Federal investigators in New York, looking into payments to Stormy Daniels and Karen McDougal, questioned longtime aides of the president early in the probe and amassed more evidence than previously known. 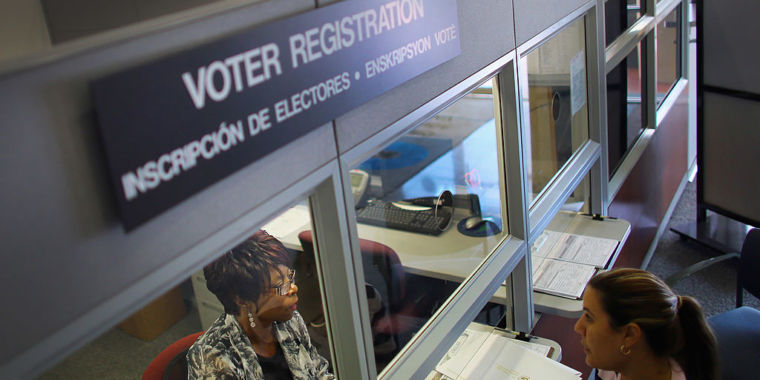 DHS, FBI say election systems in all 50 states were targeted in 2016

A joint intelligence bulletin (JIB) has been issued by the Department of Homeland Security and Federal Bureau of Investigation to state and local authorities regarding Russian hacking activities during the 2016 presidential election. While the bulletin contains no new technical information, it is the first official report to confirm that the Russian reconnaissance and hacking efforts in advance of the election went well beyond the 21 states confirmed in previous reports.

As reported by the intelligence newsletter OODA Loop, the JIB stated that, while the FBI and DHS “previously observed suspicious or malicious cyber activity against government networks in 21 states that we assessed was a Russian campaign seeking vulnerabilities and access to election infrastructure,” new information obtained by the agencies “indicates that Russian government cyber actors engaged in research on—as well as direct visits to—election websites and networks in the majority of US states.” While not providing specific details, the bulletin continued, "The FBI and DHS assess that Russian government cyber actors probably conducted research and reconnaissance against all US states’ election networks leading up to the 2016 Presidential elections."

The White House is moving to do what no president has accomplished since World War II: eliminate a major federal agency.

If the Trump administration succeeds at dismantling the Office of Personnel Management, the closure could be a blueprint for shuttering other departments as it tries to shrink government.

The agency would be pulled apart and its functions divided among three other departments. An executive order directing parts of the transition by the fall is in the final stages of review, administration officials said, with an announcement by President Trump likely by summer. OPM employees were briefed at a meeting in March.

For Trump, the breakup of the 5,565-employee federal personnel agency would offer a jolt of bureaucratic defibrillation to a slow-to-change workforce that the president and his top aides have targeted as a symptom of a sluggish, inefficient government.

It’s not easy to wipe out a federal department, especially one that serves 2.1 million employees across the government. The White House is short on details even as it prepares to move employees out of OPM’s headquarters in downtown Washington. Officials were not able to estimate the short- or long-term savings of the closure.

The White House is attempting to dismantle the agency in several stages, with some steps beginning now and other changes delayed pending congressional approval.

But by starting the process, the administration hopes to claim a win on a major government reorganization plan that has languished without buy-in from Congress.

Oh and Trump shared some anecdotes on TV.

Trump said he would have to make that call after listening to harrowing stories about illegal immigration during a meeting with supporters.

Trump relayed to the media some of the anecdotes he had been told about the danger on the border.

“We start talking and the first person gets up and says, ‘Sir, we have many people dying. Coming across the border,’” Trump said. ”‘They’ll be dropped off and they start walking and they’ll say Houston’s right down the road. But it’s actually 300 miles away. And we find dead people from Guatemala, from Honduras, from El Salvador, From Mexico. All over.’”

The president also said that the troops sent to the border have to use more restraint than they otherwise would.

“Our military, don’t forget, can’t act like a military would act. Because if they got a little rough, everybody would go crazy,” Trump said.

“They have all these horrible laws that the Democrats won’t change, they will not change them. And I think they will pay a very big price in 2020 for all of the things, whether it is the fake witch hunt they start out, or whether it is a situation like this. I think the border is going to be an incredible issue,” Trump said.

Assange has been arrested in London…on US Extradition Warrant.

We know he has a sealed indictment in US, revealed in some unredacted materials mistakenly revealed.

LONDON — Julian Assange, the WikiLeaks founder who released reams of secret documents that embarrassed the United States government, was arrested by the British police on Thursday at the Ecuadorean Embassy in London, where he had lived since 2012, after Ecuador withdrew the asylum it had granted him.

The Metropolitan Police said that Mr. Assange had been detained partly in connection with an extradition warrant filed by the authorities in the United States, raising the possibility that Mr. Assange, 47, could be sent there for trial on charges related to the publication of the documents.

President Lenín Moreno of Ecuador said on Twitter that his country had decided to stop sheltering Mr. Assange after “his repeated violations to international conventions and daily-life protocols,” a decision that cleared the way for the British authorities to detain him.

The relationship between Mr. Assange and Ecuador has been a rocky one, even as it offered him refuge and even citizenship, and WikiLeaks said last Friday that Ecuador “already has an agreement with the UK for his arrest” and predicted that Mr. Assange would be expelled from the embassy “within ‘hours to days.’ ” 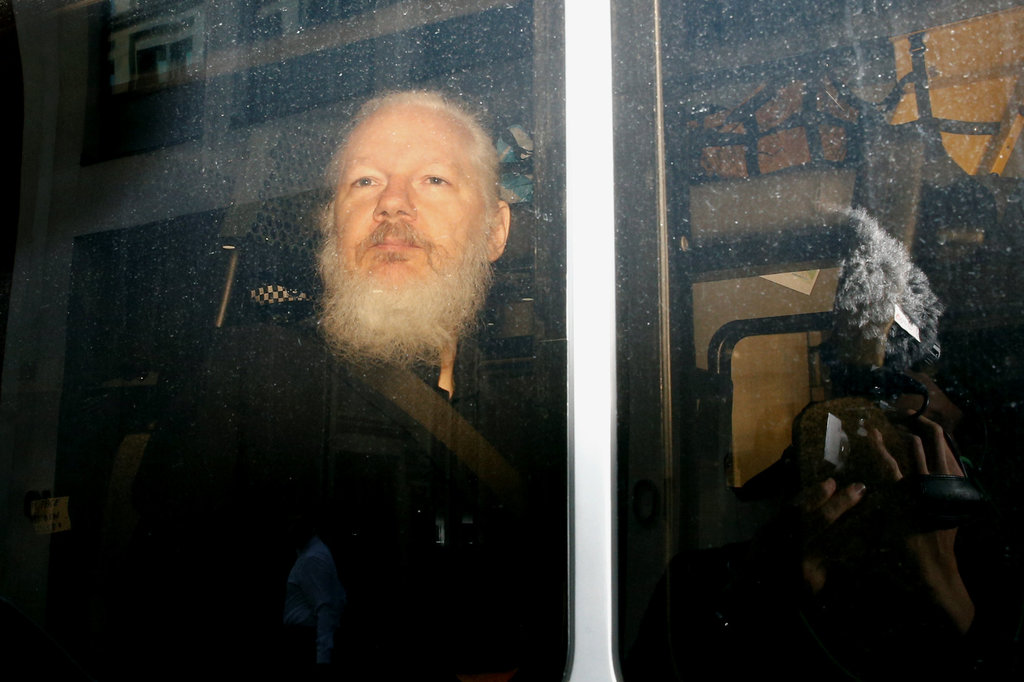 Mr. Assange, the founder of WikiLeaks, took refuge in 2012 in the Ecuadorean Embassy in London. He was arrested there on Thursday after Ecuador revoked his asylum status. 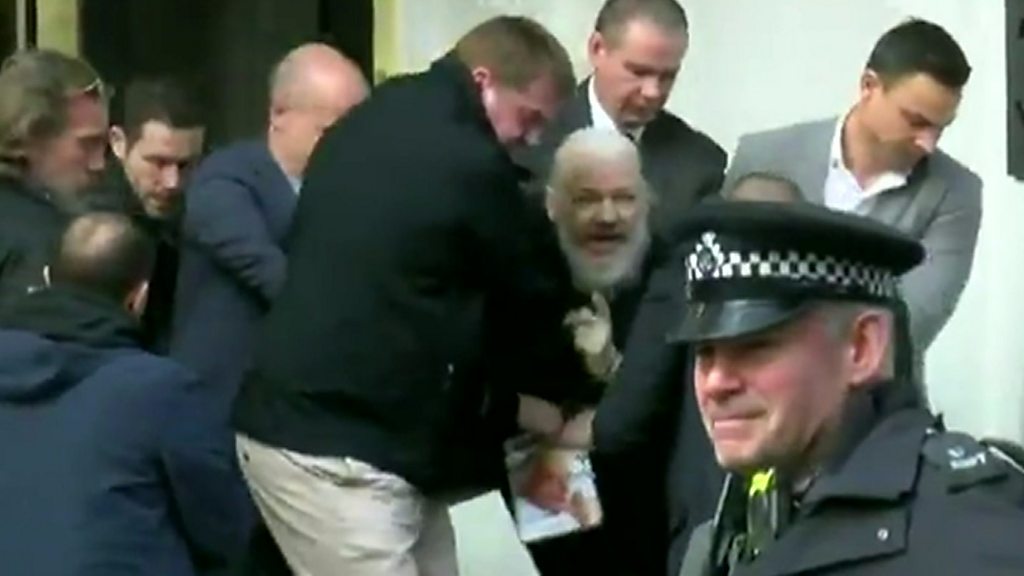 He faces extradition to the US for his alleged role in one of the largest leaks of government secrets.

Vox has a nice article out now about Trump’s sister: