1/ Trump and the Trump Organization sued Democratic House Oversight Committee Chairman Elijah Cummings to block a subpoena seeking information about his finances. The committee subpoenaed Mazars USA, Trump's longtime accountant, for 10 years' worth of Trump's financial records after the firm requested a so-called "friendly subpoena." Trump's lawyers complained that Democrats have "declared all-out political war" against him, with subpoenas as their "weapon of choice." (CNBC / Politico / Washington Post / CNN) / Axios)

Mueller’s investigators found insufficient evidence to bring obstruction of justice charges against Trump, despite several instances where Trump tried to have the probe ended.

As I understand it, per DOJ policy, Mueller was not able to indict a sitting president. Because of that, it would be unfair to declare that Trump committed a crime, since he wouldn’t be able to defend himself in a court of law. So Mueller laid out the evidence for an obstruction case that could be used in impeachment proceedings or in a trial after he leaves office. To say that there was insufficient evidence for an obstruction of justice charge plays into the narrative that Trump’s lawyers and AG Barr are peddling.

Lawfare had a similar analysis on the obstruction of justice. They even created a “heat map” of the evidence. 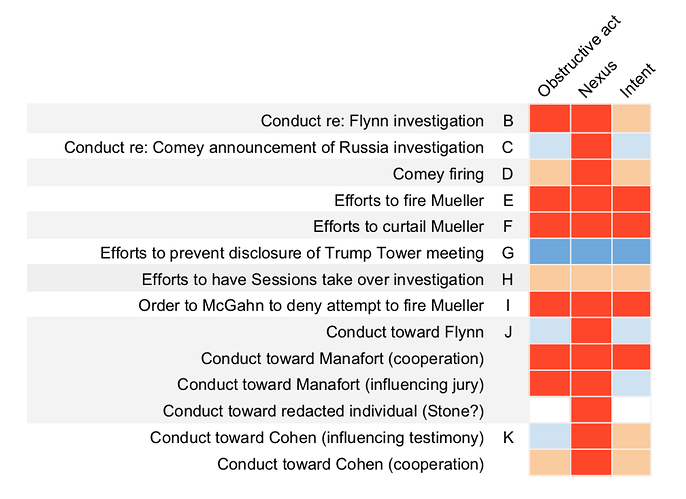 Obstruction of Justice in the Mueller Report: A Heat Map

The Mueller report describes numerous instances in which President Trump may have obstructed justice. A few days ago, I threw together a quick spreadsheet on Twitter to assess how Special Counsel Robert Mueller seemed to assess the evidence.

Yeah, I misstated this. Will update the blog shortly

@matt You do an amazing job Matt. Thanks for your wonderful contribution in speaking truth to power