1/ The White House rejected a House Oversight Committee request for Stephen Miller to testify about his role in Trump's immigration policies, including a plan to bus migrants to "sanctuary cities." White House counsel Pat Cipollone said blocking Miller from appearing before the committee follows "long-standing precedent" established by previous administrations. Cipollone said Cabinet secretaries and other executive branch officials would instead provide "reasonable accommodation" for requests and questions from the committee on immigration policy issues. (CNN / Politico / ABC News)

2/ House Judiciary Committee Chairman Jerry Nadler suggested fining officials personally for noncompliance with congressional subpoenas . In order to do so, the House would need to vote on a new rule to allow it to fine people outside the court system. The House could also vote to hold officials in contempt or sue to enforce the subpoena in court, which could take months or years. This week alone the White House directed a former personnel security official to not appear at a scheduled House Oversight Committee deposition, blocked former White House counsel Donald McGahn from testifying to the House Judiciary Committee, and the Justice Department ignored a subpoena from the Oversight Committee for testimony about the addition of a citizenship question to the 2020 Census. The Treasury Department also ignored House deadline to turn Trump’s tax returns over to the Ways and Means Committee, and Trump sued to block a subpoena of his accounting firm. (Bloomberg / CNN / Washington Post / New York Times / Axios)

@matt Great job summarizing these stories. Even with a rubric and a tracking thread, the congressional committee news is still confusing.

Here’s Rosenstein clearly taking T’s side about the Russian Investigation and blaming the Obama Administration about not making more of it. Clearly there was a McConnell angle which prevented Obama from doing so * (see reference below)

Rosenstein quoted Trump on the rule of law. “We use the term ‘rule of law’ to describe our obligation to follow neutral principles. As President Trump pointed out, ‘we govern ourselves in accordance with the rule of law rather [than] … the whims of an elite few..’ https://t.co/X6fSvhF1jt”

Rod Rosenstein in speech tonight criticizing Obama admin handling of Russia investigation: “The previous Administration chose not to publicize the full story about Russian computer hackers and social media trolls, and how they relate to a broader strategy to undermine America.” pic.twitter.com/HaEsRbQgYJ

Rod Rosenstein in speech tonight criticizing Obama admin handling of Russia investigation: “The previous Administration chose not to publicize the full story about Russian computer hackers and social media trolls, and how they relate to a broader strategy to undermine America.”

Mueller Investigation
McConnell’s betrayal. While we knew the broad outlines of this story, we now have more details and I think it’s important to remember. Before the 2016 election, CIA Director John Brennan informed U.S. officials including Mitch McConnell that Putin was interfering in the election with the goal of assisting Donald Trump. Not only did McConnell say that he wouldn’t sign on to any condemnations of Russia’s actions, he said if the Obama administration went public he would “all out Brennan as a partisan intervening on behalf of Hillary Clinton.”

Too long; didn’t read section GOP operative and anti-Trumper, Cheri Jacobus, said the investigation of an email hacking/catfishing scheme that targeted her has been forwarded to Mueller. Russia’s Deputy Attorney General, who allegedly directed the foreign operations of Natalia Veselnitskaya, died last week in a mysterious helicopter crash in Russia. Sunday, it was revealed by a Moscow journalist that the pilot of the helicopter had two bullet wounds and there is evidence of bullets hitting the b…

This speech is getting big news tonight…Rosenstein spinning the story, and revising the story about Obama’s role in the Russian interferences.

In his speech tonight, Rod Rosenstein unloaded on the Obama administration, and the former FBI Director, while reverentially quoting Trey Gowdy and Trump. Rosenstein needs to be called to testify before Congress as well. https://t.co/EdRESCEE3L

A few Golden Nuggets of Truth from a Courageous Man, Rod Rosenstein. "Upon the Stage of Life, while the Conscience Claps, let the World Hiss." "Truth is about solid evidence, not a strong opinion." "Let the facts prevail, that is not where we are in politics." pic.twitter.com/jlMWxc7Fik

Deputy Attorney General Rod Rosenstein defended his handling of the Russia investigation Thursday evening, recalling how he had promised to “do it right” during his Senate confirmation hearing and “take it to the appropriate conclusion,” while taking pointed swipes at what he called “mercenary critics,” politicians and the news media.

"It’s not our job to render conclusive factual findings. We just decide whether it is appropriate to file criminal charges," Rosenstein said, speaking at a dinner in New York where he was honored by the Armenian Bar Association.

…
Rosenstein went on to argue Thursday night that “some critical decisions” had been made before his tenure as the deputy attorney general. The previous administration “chose not to publicize the full story about Russian computer hackers and social media trolls” but the story later leaked to the media, he argued, and then-FBI Director James Comey then told Congress there was a counterintelligence investigation and alleged that Trump “pressured him to close the investigation.”

“So that happened,” Rosenstein said to laughter from the audience, before highlighting Mueller’s findings of extensive Russian interference in the 2016 presidential election.

“The bottom line is that there was overwhelming evidence that Russian operatives had hacked American computers and defrauded American citizens, and that was only the tip of the iceberg of a comprehensive Russian strategy to influence elections, promote social discord and undermine America,” he added.

Rosenstein stood by his decision to appoint Mueller, despite the fact that “not everybody was happy with my decision, in case you didn’t notice” – a possible reference to Trump’s vocal and long-standing misgivings about the need for and motivations of the special counsel’s team. 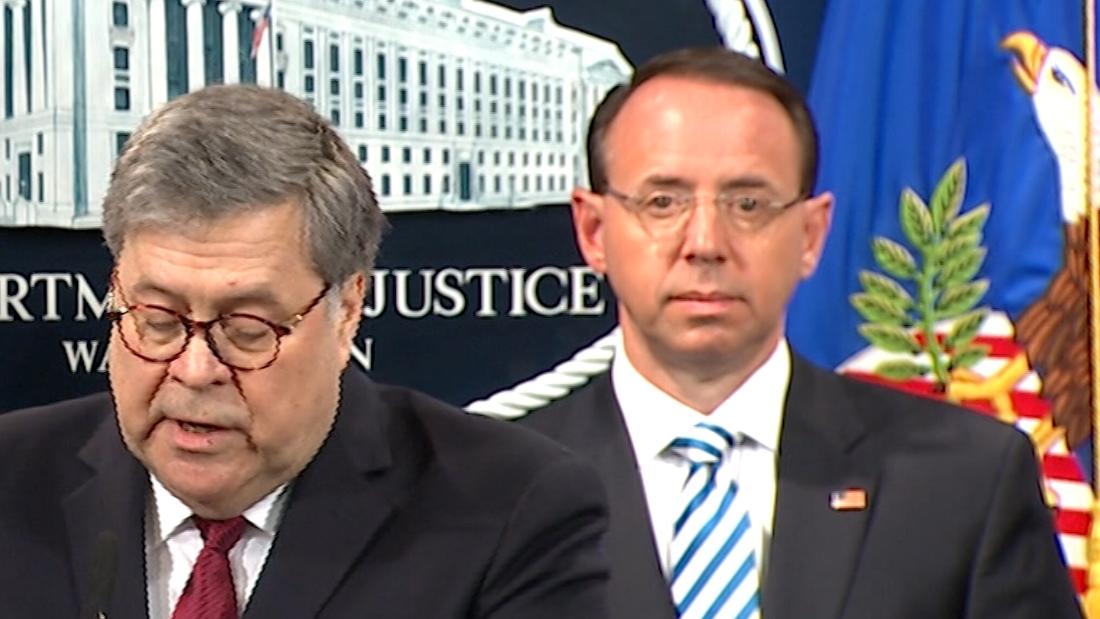 Deputy Attorney General Rod Rosenstein defended his handling of the Russia investigation Thursday evening, recalling how he had promised to "do it right" during his Senate confirmation hearing and "take it to the appropriate conclusion," while taking...