1/ Robert Mueller twice objected to Attorney General William Barr's four-page summary to Congress, saying the memo "did not fully capture the context, nature, and substance of this office's work and conclusions." Barr's summary claimed that the Mueller investigation "did not establish that members of the Trump Campaign conspired or coordinated with the Russian government" and that Mueller "did not draw a conclusion — one way or the other —as to whether the examined conduct constituted obstruction." Mueller, however, sent a letter to Barr on March 27th – three days after Barr issued his summary – citing "public confusion about critical aspects of the results of our investigation" that "threatens to undermine a central purpose for which the department appointed the special counsel: to assure full public confidence in the outcome of the investigations." Mueller asked the Justice Department to release the 448-page report's introductions and executive summaries, making some initial suggested redactions in order to "alleviate the misunderstandings that have arisen and would answer congressional and public questions about the nature and outcome of our investigation." Mueller's office first informed the Justice Department of their concerns on March 25th, the day after Barr released his summary clearing Trump of obstruction of justice. On April 9, Barr testified to Congress that Mueller declined an opportunity to review his summary of "principal conclusions." Barr also previously testified that he did not know if Mueller supported his conclusion on the question of possible obstruction.(Washington Post / New York Times / NBC News / New York Times / Politico / CNN / The Guardian)

Government watchdogs concerned about vacancies at the top of DHS

Current vacancies at the highest levels of the Department of Homeland Security are cause for concern at a department already struggling with management and morale problems, current and former government watchdogs testified on Wednesday.

Current vacancies at the highest levels of the Department of Homeland Security are cause for concern at a department already struggling with management and morale problems, current and former government watchdogs testified on Wednesday.

“In the best of times, DHS is unruly and difficult to manage organization and we are not in the best of times,” said former Inspector General John Roth during a House Homeland Security Committee hearing. Vacancies, “particularly those that remain vacant for a long time, cripple the ability of the Department to move forward,” wrote Roth in testimony.

“This lack of settled leadership contributes to the significant morale problems that are endemic to DHS components,” Roth said in his written testimony.

There are currently acting officials serving in eight positions at DHS that require Senate confirmation, according to the Government Accountability Office.

Asked by committee member Rep. Mark Walker, R-North Carolina, if the leadership gap was “far outside the bounds” of anything he had ever seen, GAO Comptroller General Gene Dodaro, said, “I would say, it’s in the upper areas of concern.” "What you are requesting," said a top ICE official, "is not something that we are going to be able to complete in a rapid fashion."

On the same day the Trump administration said it would reunite thousands of migrant families it had separated at the border with the help of a “central database,” an official was admitting privately the government only had enough information to reconnect 60 parents with their kids, according to emails obtained by NBC News.

“[I]n short, no, we do not have any linkages from parents to [children], save for a handful,” a Health and Human Services official told a top official at Immigration and Customs Enforcement on June 23, 2018. "We have a list of parent alien numbers but no way to link them to children."

In the absence of an effective database, the emails show, officials then began scrambling to fill out a simple spreadsheet with data in hopes of reuniting as many as families as they could.

Here is comes…dirty politics coming right at cha. It involves Giuliani trying to dig up bad reports AND get an investigation going via the DOJ on Joe Biden, and his son Hunter Biden, over Ukrainian business dealings.

The broad outlines of how the Bidens’ roles intersected in Ukraine have been known for some time. The former vice president’s campaign said that he had always acted to carry out United States policy without regard to any activities of his son, that he had never discussed the matter with Hunter Biden and that he learned of his son’s role with the Ukrainian energy company from news reports.

JUST POSTED: @RudyGiuliani solicited information from Ukrainian officials that he intended to use to undermine the MUELLER report, & to try to damage @JoeBiden. Rudy briefed TRUMP on the effort. Now both are suggesting @TheJusticeDept should investigate. https://t.co/tblUPYPJMG

It’s not a difficult question: did the White House ever ask Attorney General Barr to investigate anyone? It seems like something he should be able to answer. pic.twitter.com/UlwZx2VJqV 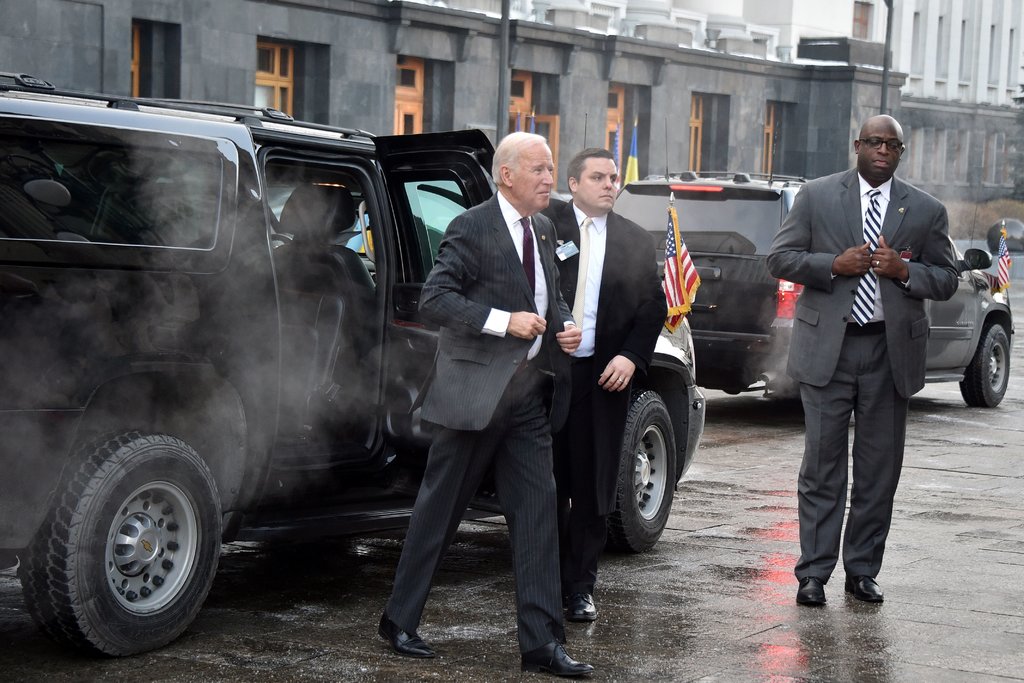 Biden Faces Conflict of Interest Questions That Are Being Promoted by Trump...

As vice president, Joe Biden played a key role in the dismissal of a Ukrainian prosecutor who had opened an investigation of a company employing Mr. Biden’s son.

Maddow mentions on tonight’s show (MSNBC) that she’s hunting down some information that Barr did ask Mueller to end his investigation in March. 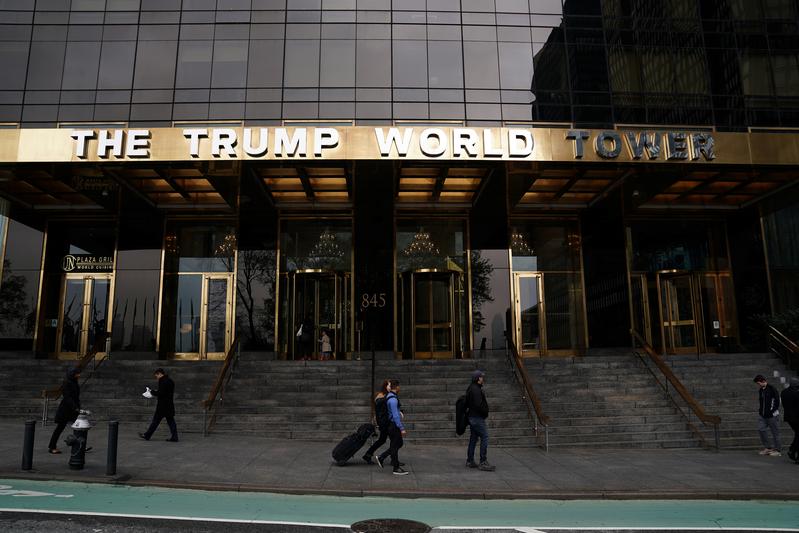 The U.S. State Department allowed seven foreign governments to rent luxury condominiums in New York's Trump World Tower in 2017 without approval from Congress, according to documents and people familiar with the leases, in what some experts say could...

Yes, this Administration is rotten to the core.

The U.S. State Department allowed at least seven foreign governments to rent luxury condominiums in New York’s Trump World Tower in 2017 without approval from Congress, according to documents and people familiar with the leases, a potential violation of the U.S. Constitution’s emoluments clause.

The 90-story Manhattan building, part of the real estate empire of Donald Trump, had housed diplomats and foreign officials before the property developer became president. But now that he is in the White House, such transactions must pass muster with federal lawmakers, some legal experts say. The emoluments clause bans U.S. officials from accepting gifts or payments from foreign governments without congressional consent.

The rental transactions, dating from the early months of Trump’s presidency and first revealed by Reuters, could add to mounting scrutiny of his business dealings with foreign governments, which are now the subject of multiple lawsuits.

Congressional staffers confirmed to Reuters that the Trump World Tower lease requests were never submitted to Congress. Elijah Cummings, chairman of the House Oversight and Reform Committee, said his committee has been “stonewalled” in its efforts to obtain detailed information about foreign government payments to Trump’s businesses.

“This new information raises serious questions about the President and his businesses’ potential receipt of payments from foreign governments,” Cummings said in a statement to Reuters. “The American public deserves full transparency.”

Oh, right, so we’re supposed to ask William Barr about this. Mmmm… What are the chances we’ll get a truthful answer or any answer at all?

The 1982 Foreign Missions Act requires foreign governments to get State Department clearance for any purchase, lease, sale, or other use of a property in the United States. Through the Freedom of Information Act, Reuters obtained diplomatic notes sent to the agency under this requirement from early 2015 until late 2017.

The records show that in the eight months following Trump’s January 20, 2017 inauguration, foreign governments sent 13 notes to the State Department seeking permission to rent or renew leases in Trump World Tower. That is more solicitations from foreign governments for new or renewed leases in that building than in the previous two years combined.

The governments of Iraq, Kuwait, Malaysia, Saudi Arabia, Slovakia, Thailand and the European Union got the green light to rent a combined eight units in Trump World Tower and followed through with leases, according to other documents viewed by Reuters and people familiar with the leases. Five of those governments - Kuwait, Malaysia, Saudi Arabia, Thailand and the European Union - had also sought to rent units there in 2015 and 2016, State Department records showed. … 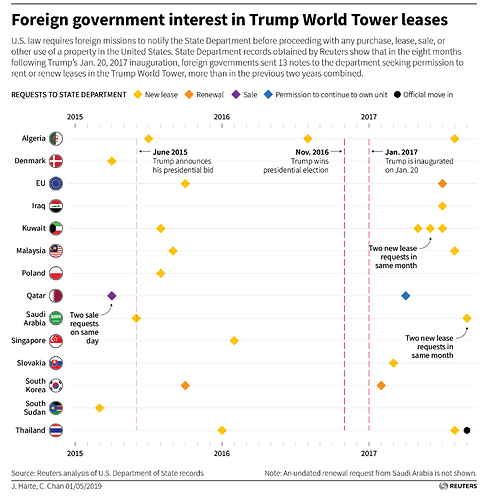 Trump tried slipping this by us while we were watching Barr’s testimony: 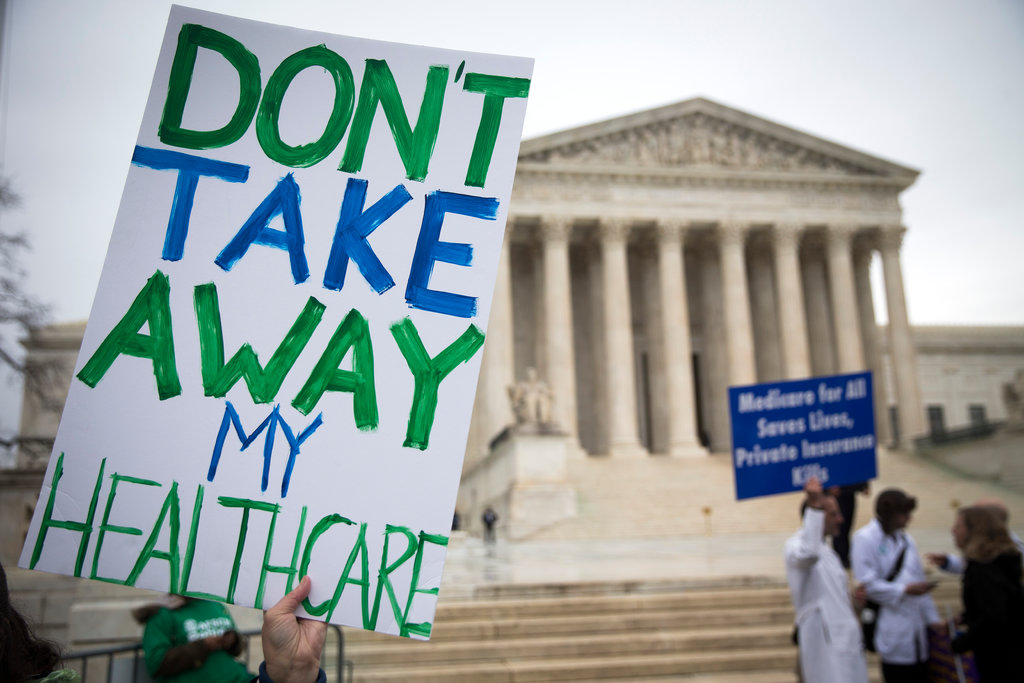 Trump Administration Files Formal Request to Strike Down All of Obamacare

The court filing, which goes beyond an earlier administration position, is expected to be an issue in the presidential campaign.

Here’s an excellent summary of what Trump is destroying. It’s from Andy Slavitt, former head of Medicare, Medicaid and the Affordable Care Act for Obama. 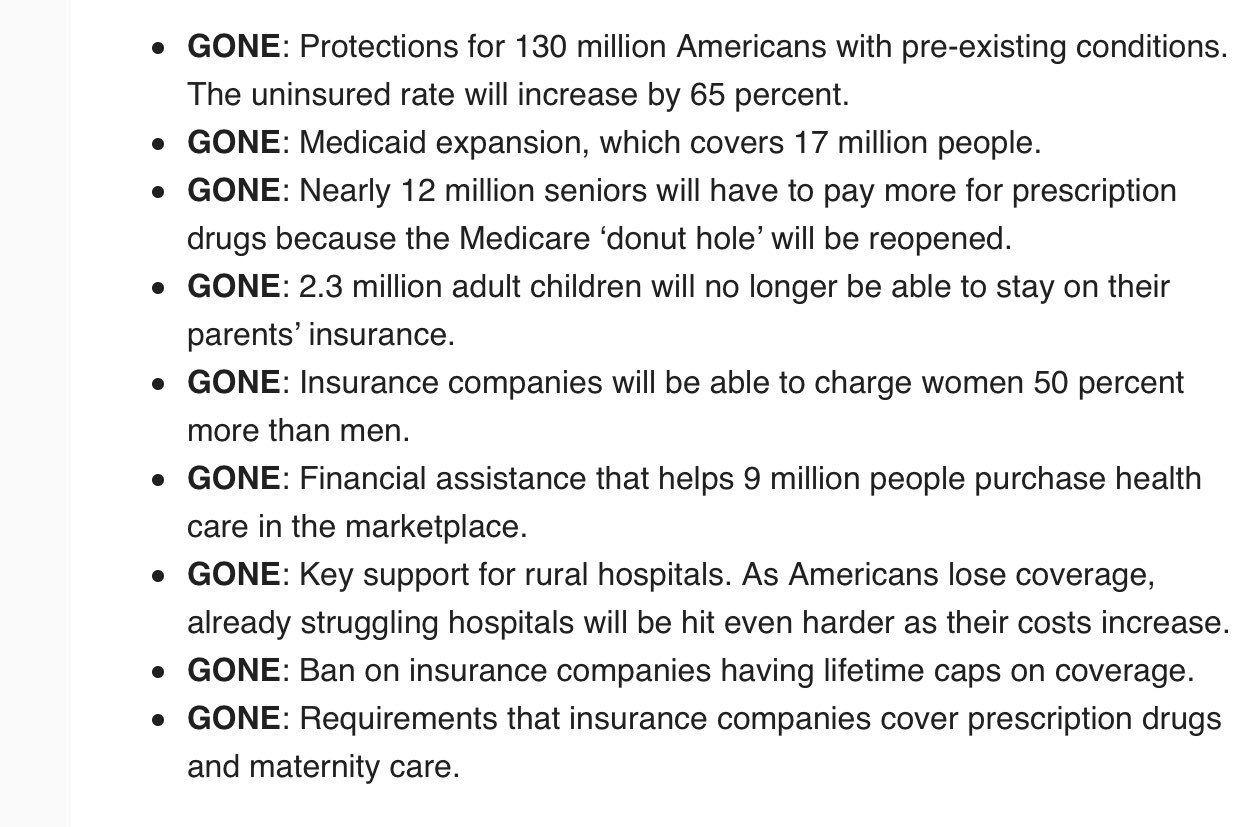 BREAKING: Trump files a brief today going further than ever before to dismantle the ACA in entirety. This means:

If I were Team Trump right now, I'd be desperate for the biggest ugliest distraction they could possibly come up with. 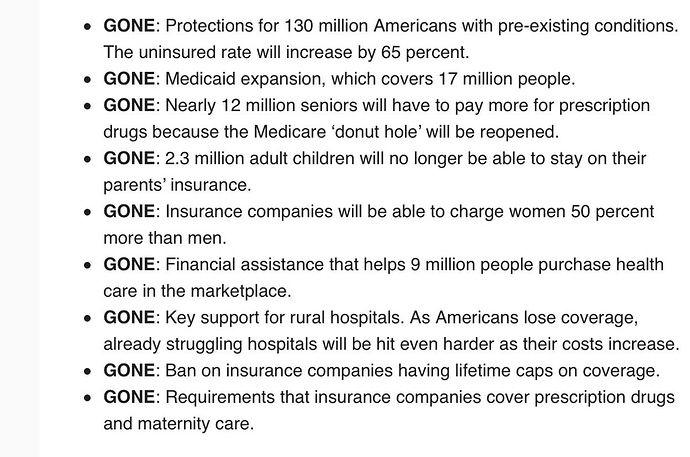 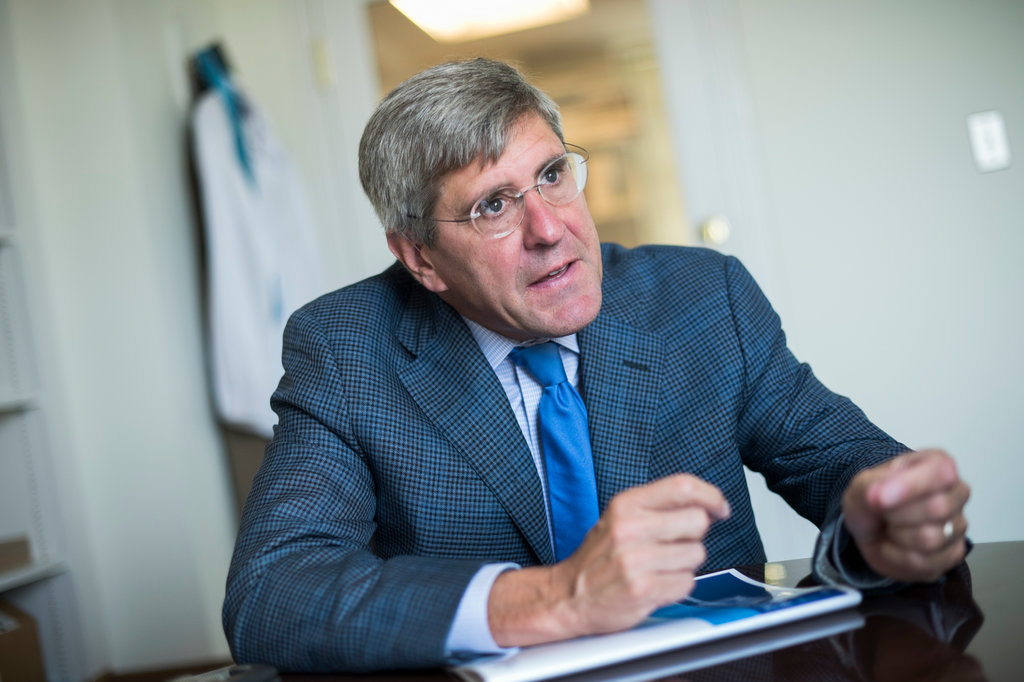 President Trump said he would not nominate Stephen Moore for a seat on the Federal Reserve board after several Republican lawmakers raised concerns about the conservative economist’s previous comments denigrating women.

Mr. Trump, in a tweet, said “Steve Moore, a great pro-growth economist and a truly fine person, has decided to withdraw from the Fed process.”

I wonder if Steve Moore knows he has withdrawn? And also thank goodness, that guy is crazy.

Moore’s nomination is at once inexplicable and utterly predictable. How did a candidate with few qualifications and a damaging paper trail get nominated for an important position in the Trump administration? Presumably the same way all the other previous candidates with few qualifications or a damaging paper trail did: They were on TV a lot, they had nice things to say about the president, and that was good enough for him. More than two years into his presidency, and despite a long record of failed or aborted nominations, Trump remains remarkably uninterested in vetting the people he wants to put in top posts.

If you’ve paid attention to conservative media over the past couple of decades, Moore has been a familiar figure, as a persistent if not especially heavyweight proponent of supply-side economics. Moore advised Cain on his infamous “9-9-9” tax plan during his 2012 presidential run, then advised Trump in 2016. He consulted on Trump’s 2017 tax cuts and co-wrote a book called Trumponomics .

that guy is crazy.

Ah, remember the days when crazy people weren’t nominated to serve at the highest levels of our government? Good times.