1/ A federal judge rejected a request by the Trump administration to assign a new legal team to a lawsuit that blocked the addition of the citizenship question to the 2020 census. [Editor's note: This is story is developing…] (Bloomberg)

1/ A federal judge rejected a Trump administration request to assign a new legal team to a lawsuit that blocked the addition of the citizenship question to the 2020 census . U.S. District Judge Jesse Furman called the request “patently deficient” and that the U.S. had provided “no reasons, let alone ‘satisfactory reasons,’ for the substitution of counsel.”

Breaking Judge Furman, in the New York Census cases, has denied DOJ’s motion to substitute new counsel for the existing lawyers (with two exceptions), but will permit DOJ to file a new motion if they explain the reasons for the withdrawals & certify the case won’t be delayed. 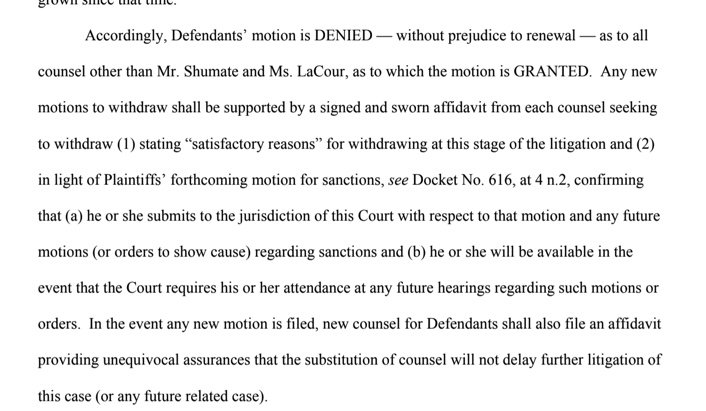 *Breaking* Judge Furman, in the New York Census cases, has denied DOJ's motion to substitute new counsel for the existing lawyers (with two exceptions), but will permit DOJ to file a new motion if they explain the reasons for the withdrawals & certify the case won't be delayed.
2 Likes
dragonfly9 July 10, 2019, 3:34am #3

When Horowitz submits his report, ‘Investigating the Investigator’ heavy scrutiny will be put on the Steele Dossier, Fisa warrants and any Counter Intelligence probes which Barr and T are saying amounted to ‘spying’ on the T campaign.

Wonder if it will be released simultaneously with Mueller’s testimony…as a PR zinger?

WASHINGTON — Inside a London office building in early June, three investigators for the Justice Department’s inspector general took a crucial step toward clearing the political fallout from the Russia investigation: They spent two days interviewing Christopher Steele, the former British spy whose now-infamous dossier of purported links between Trump associates and Russia ended up in the hands of the F.B.I. ahead of the 2016 election.

The investigators pored over Mr. Steele’s old memos and his contemporaneous notes from meetings with F.B.I. agents in the fall of 2016, according to a person familiar with the investigation. They asked Mr. Steele to explain in detail how he had validated his sources inside Russia, how he communicated with them, and how he decided which of their claims to include in his reports. They spoke at length about Mr. Steele’s work with the F.B.I. on other Russia-related investigations and his contacts with a senior Justice Department official.

The interview was a key step in the investigation by the inspector general, Michael E. Horowitz, into the facts underlying a bitter partisan feud: Did F.B.I. officials do anything wrong in 2016 when they sought to understand the Trump campaign’s links to Russia — including how they used information from Mr. Steele?

That question has hovered over the Russia inquiry for two years as President Trump and his allies repeatedly assailed the investigators who scrutinized him and his advisers. Attorney General William P. Barr, who has accused the F.B.I. of “spying” on the Trump campaign, has begun his own review that will include intelligence agencies as well.

But the investigation by Mr. Horowitz, who has maintained a reputation for being above the partisan fray, may have a better chance of being accepted across party lines as credible. Mr. Horowitz, who is expected to release a much-anticipated report of his findings in the coming weeks, is believed to be weighing whether to recommend that the Justice Department tighten rules for any future counterintelligence investigations of a presidential campaign, which was a novel dilemma in 2016, according to people familiar with aspects of his investigation.

Agents sought a warrant, mentioning in their application a claim from the dossier: One of Mr. Steele’s sources said that when Mr. Page was in Russia that July, he had supposedly met with the Kremlin-linked president of an energy firm and discussed energy cooperation between the United States and Russia and the prospects of lifting Western sanctions against the Kremlin related to its incursions in Ukraine.

Investigators flagged, in a lengthy footnote in the wiretap application, that Mr. Steele’s research was funded by someone “likely looking for information that could be used to discredit” Mr. Trump’s campaign. They did not specifically identify the Clinton campaign and the Democratic National Committee. Mr. Trump’s allies have called it an abuse to use political opposition research in a wiretap application, especially without naming its funders.

The F.B.I. has defended its use of the material, saying Mr. Steele was a veteran intelligence professional who had helped the bureau obtain credible information in previous investigations. The footnote was a sufficient red flag because it “highlights for the court that this could have been opposition research, that that’s what the source was conducting,” Sally Moyer, an F.B.I. lawyer, said in private congressional testimony last fall. 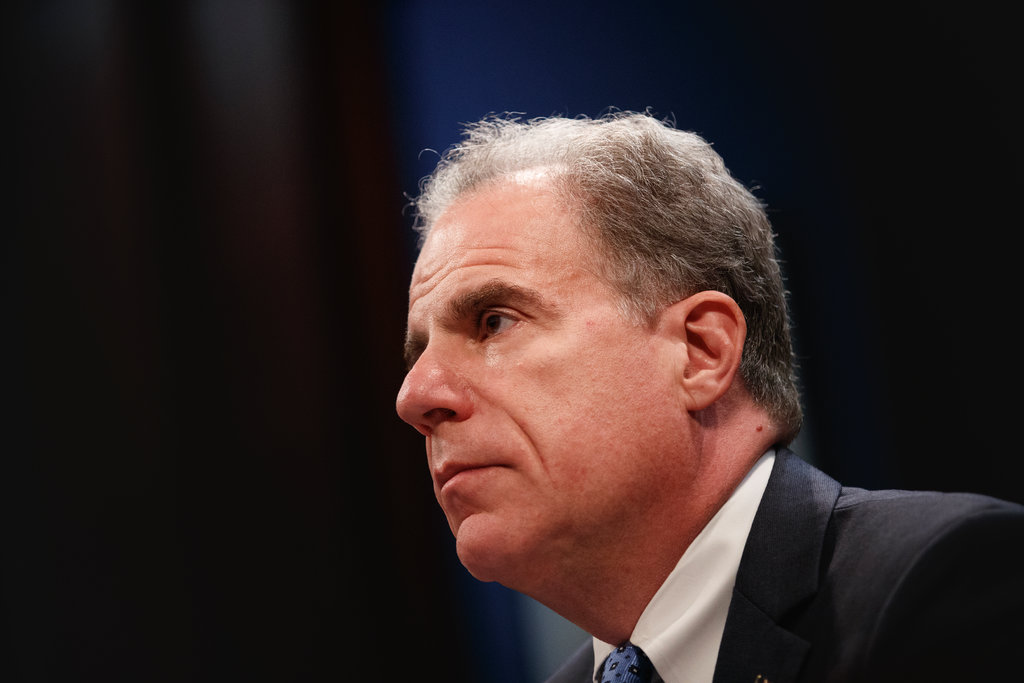 Justice Dept. Watchdog Is Preparing to Deliver Verdict on the Russia...

Investigators for the inspector general recently interviewed Christopher Steele, the former British spy, as they try to determine whether the F.B.I. misstepped in the inquiry.

Ambassador Darroch resigns…he was a truth teller and well liked by the Brits and Americans. 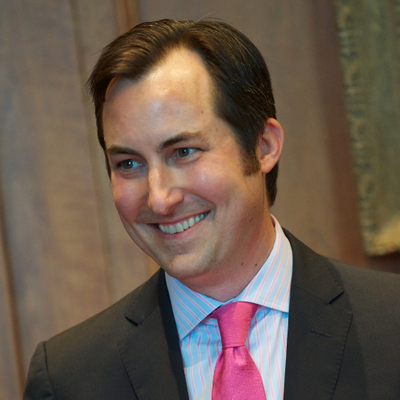 There is no room for truth tellers in a mad king’s court. https://t.co/uIWaQXl8rl

BREAKING: @KimDarroch to resign as UK ambassador to Washington - @foreignoffice

BREAKING: @KimDarroch to resign as UK ambassador to Washington - @foreignoffice 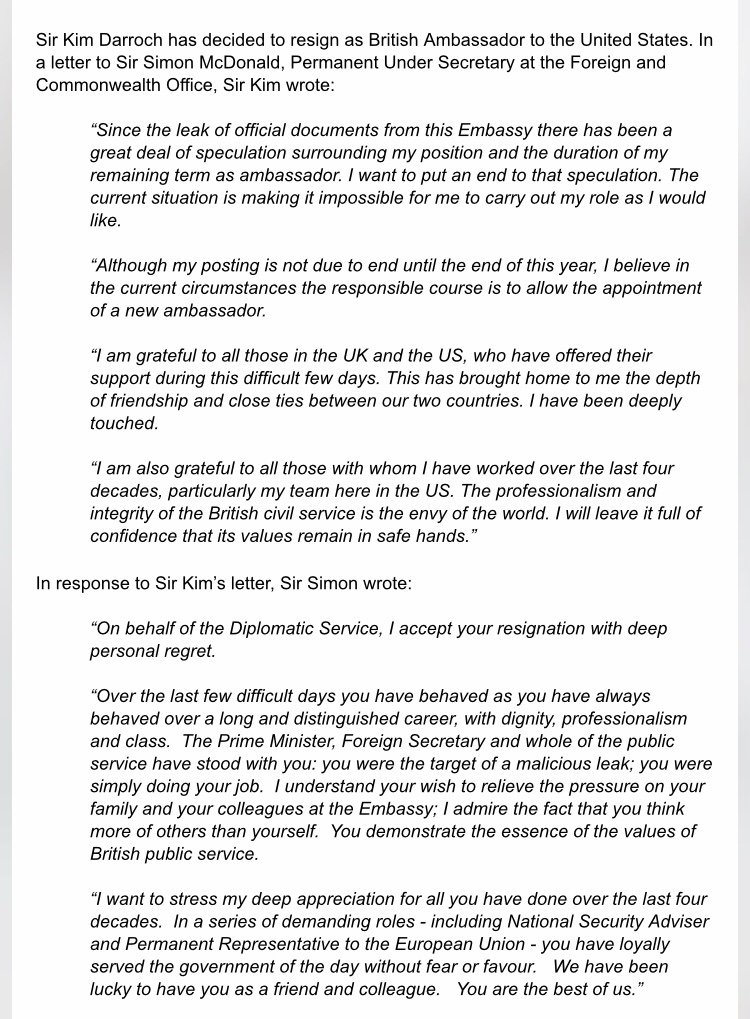 @KimDarroch @foreignoffice Extracts from @KimDarroch’s resignation letter to @SMcDonaldFCO. He says he wants to put an end to speculation about his position since the “leak of official documents from this Embassy... The current situation is making it impossible for me to carry out my role as I would like.”
3 Likes
Keaton_James July 10, 2019, 5:59pm #5 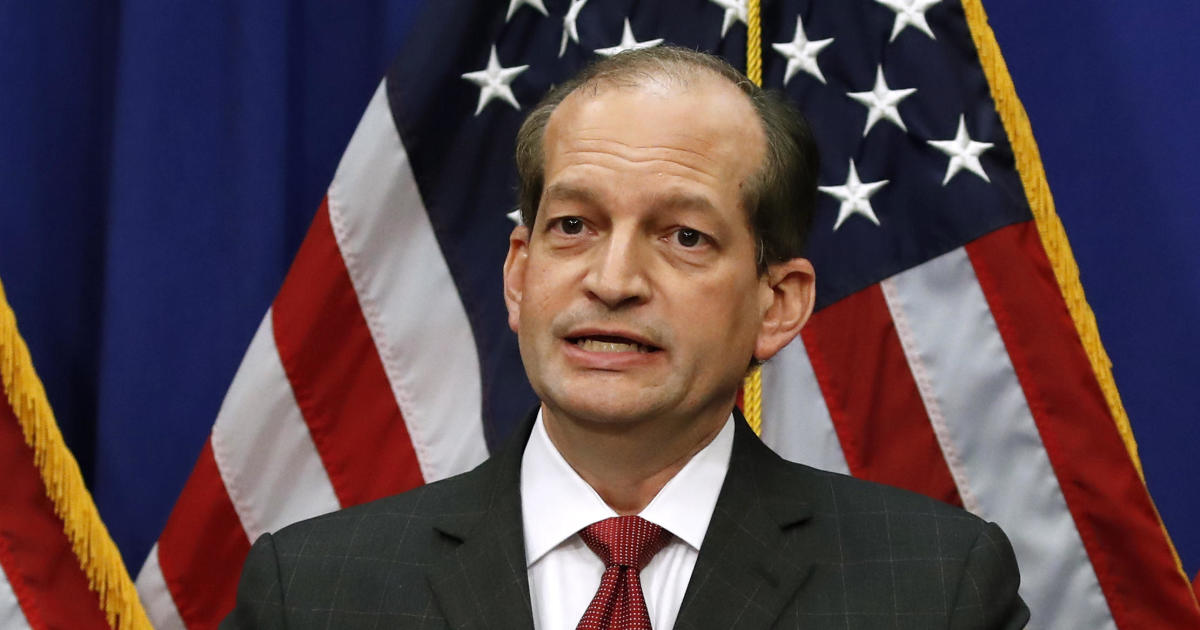 In a news conference, Acosta defended the 2008 plea deal reached with Jeffrey Epstein, saying "we live in a very different world" today

The House Oversight Committee has requested Acosta to testify on the Epstein plea deal on July 23.

Acosta has called a press conference which will be streaming live at 2:30pm ET at the link above. The best thing about this request from Oversight is that it will force Acosta’s hand. Will he start stonewalling immediately by refusing to testify, or will he at least give the appearance of cooperating?