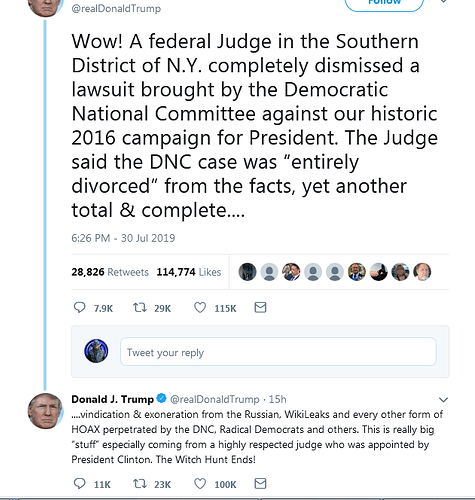 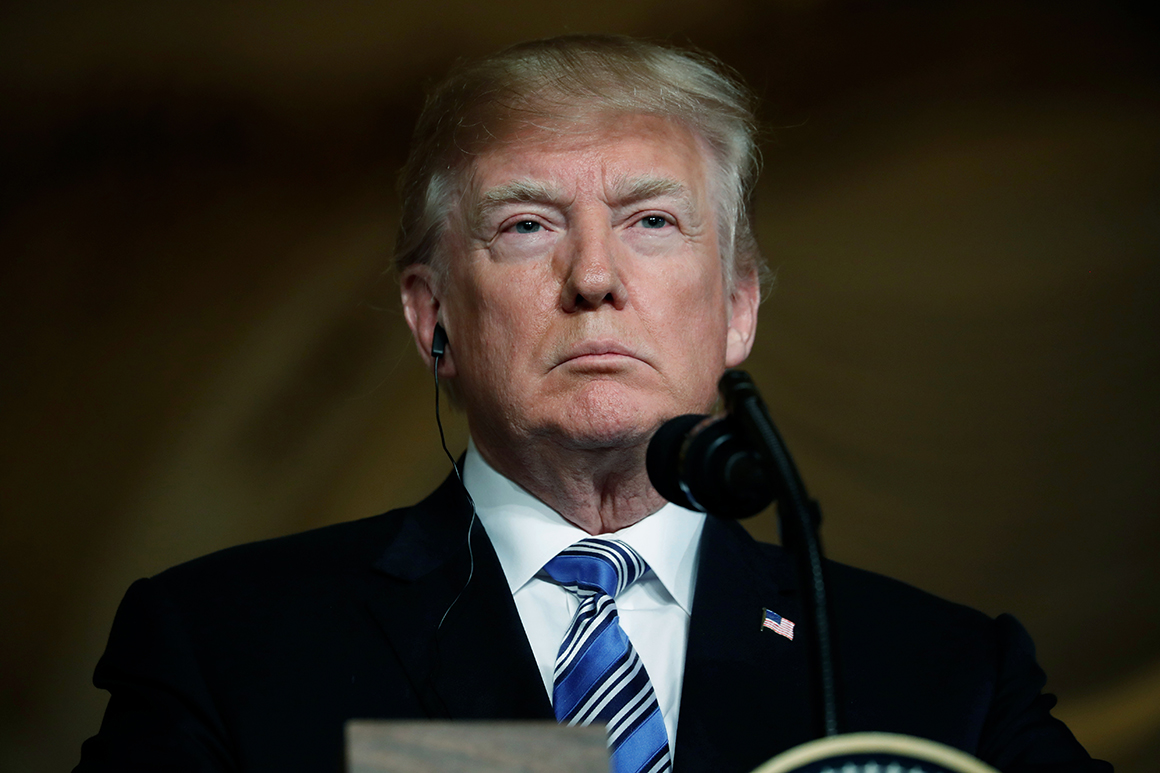 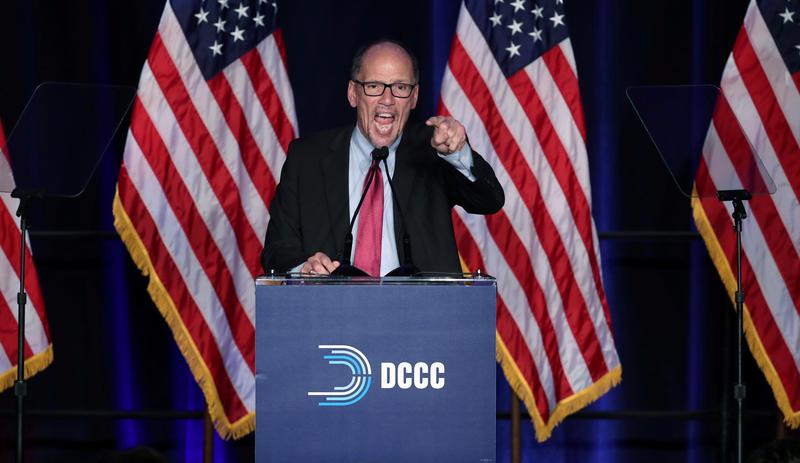 A U.S. judge on Tuesday dismissed a Democratic Party lawsuit arguing that the Russian government, President Donald Trump’s campaign and WikiLeaks carried out a conspiracy to influence the 2016 U.S. election.

Incredibly, GOP senators are demanding billions more in tax cuts for the rich 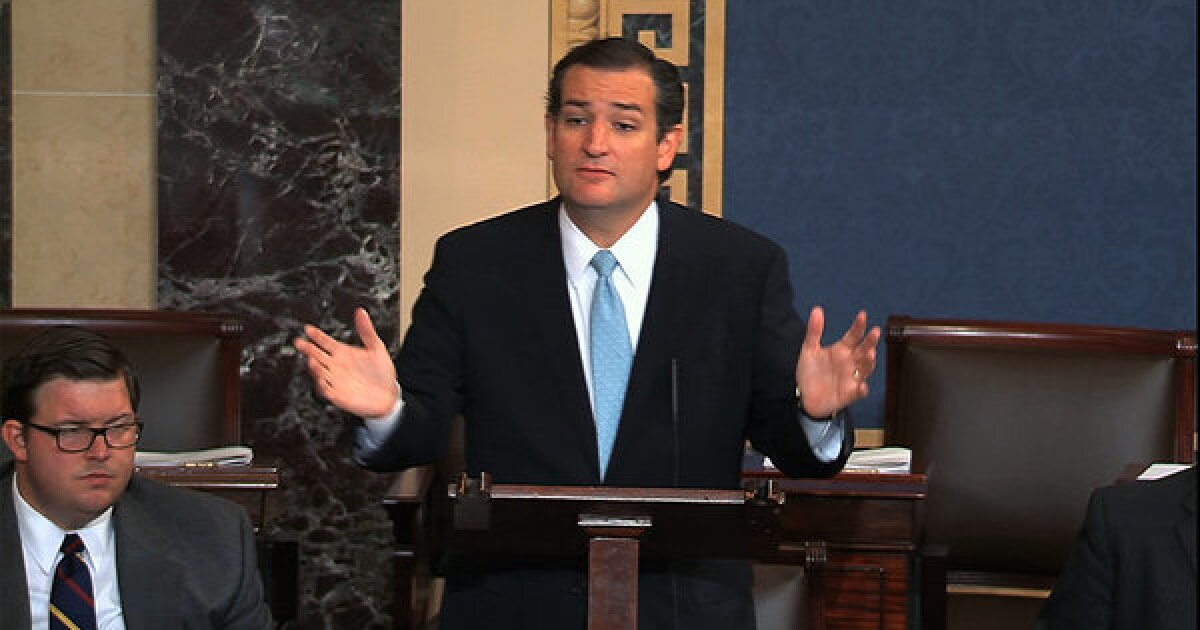 A group of 21 GOP senators demands that Mnuchin enact another tax cut for the rich by fiat, which is probably illegal.

accusing his critics of engaging in “modern-day McCarthyism” to “smear” his record. McConnell and Senate Republicans blocked Democratic attempts to bring up several bipartisan election security bills for votes

And then there’s this…Thanks to Natasha Bertrand who links former McConnell staffers who lobbied congress to get the santions lifted for Deripaska, and thereby opening up the way for McConnell to get the KY aluminum plant.

Two former top staffers to Senate Majority Leader Mitch McConnell have lobbied Congress and the Treasury Department on the development of a new Kentucky aluminum mill backed by the Russian aluminum giant Rusal, according to a new lobbying disclosure.

The disclosure comes as Democrats are pushing the Trump administration to review Rusal’s $200 million investment in the Kentucky project — concerned that the mill will supply the Defense Department — and as McConnell weathers criticism for helping block a congressional effort to stop the investment.

Indeed, the Russian firm was only able to make the investment after it won sanctions relief from penalties the Treasury Department initially imposed in April 2018 on Rusal and other companies owned by Oleg Deripaska, a Russian oligarch and Kremlin ally accused of facilitating Moscow’s nefarious activities, such as seizing land in Ukraine, supplying arms for the Syrian regime and meddling in other countries’ elections.

Attention over the sanctions relief deal have specifically focused on McConnell, given his role in halting a bipartisan congressional effort to stop the penalties rollback. McConnell told reporters in May that his support for lifting the sanctions was “completely unrelated to anything that might happen in my home state.”

“A number of us supported the administration,” McConnell said. “That position ended up prevailing. I think the administration made a recommendation without political consideration. And that’s — that was how I voted — the reason I voted the way I did.”

The lobbying disclosure, made last week, shows Bates, Dunn and three other Akin Gump lobbyists are working for Braidy Industries in the new Ashland, Ky., aluminum mill. Rusal holds a 40 percent stake in the project.

Democratic lawmakers have called for an investigation of the project by the Committee on Foreign Investment in the United States, an interagency body that can recommend the cancellation of foreign financial arrangements with U.S. firms over national security concerns. 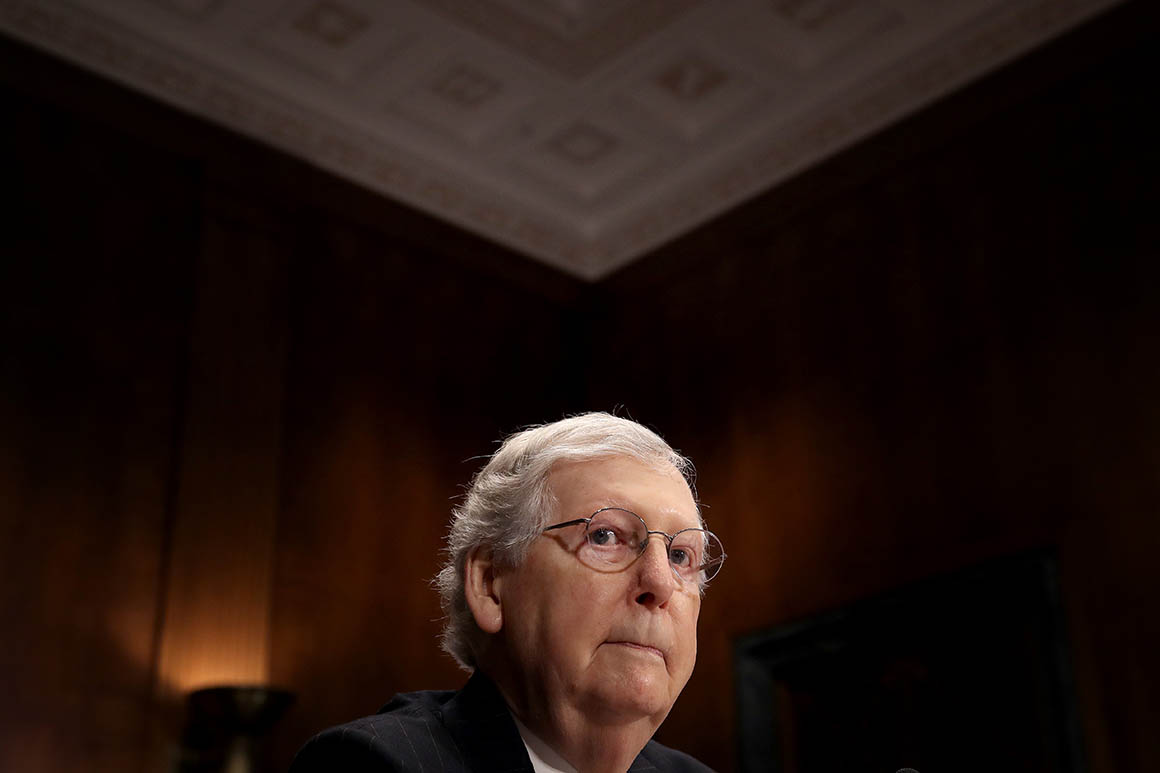 Democrats are pushing the Trump administration to review the project, and they say McConnell indirectly helped facilitate it.

NEW: Two former top staffers to Mitch McConnell have lobbied Congress and Treasury on the development of a new Kentucky mill backed by Russian aluminum giant Rusal. McConnell's office won't say whether he's been lobbied by them directly. w/@theodoricmeyer https://t.co/ENSRyXClqP

Rusal was only able to make the $200M investment after it won sanctions relief from Treasury earlier this year. Attention over the sanctions relief deal has focused on McConnell, given his role in halting a bipartisan congressional effort to stop the sanctions rollback.
3 Likes
Windthin (David Bythewood) July 31, 2019, 8:36pm #6

HIV Status No Justification for Family Separation in the US 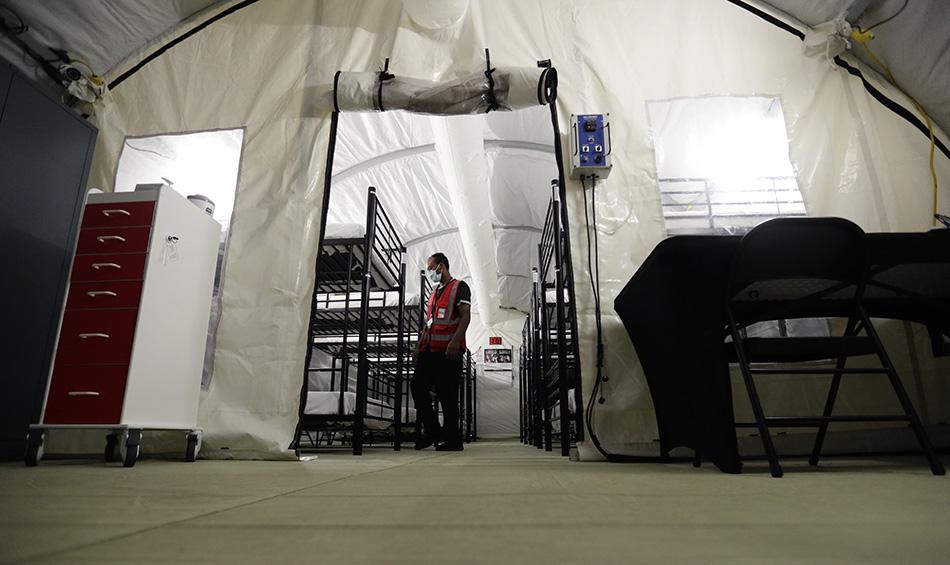 HIV Status No Justification for Family Separation in the US

Mass murderer and serial killer Eddie Gallagher gets off scott free and Trump gloats over it and punishes his prosecutors. 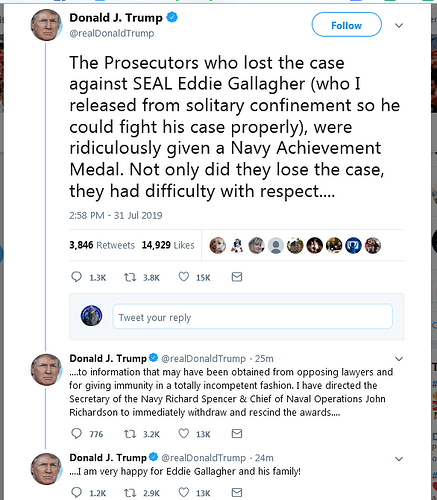 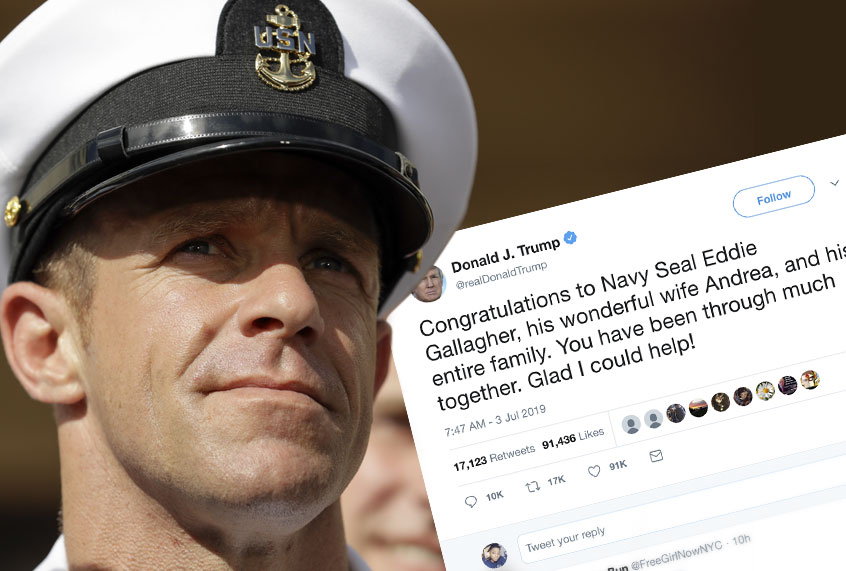 The curious case of Eddie Gallagher: Did Donald Trump help a Navy SEAL get...

Eddie Gallagher was accused of stabbing a wounded teenager to death. Trump's taking credit for getting him off

Trump basically stated that because Rep. Cummings has talked about Baltimore being “drug-infested” that he gets to say it. But the context is not the same. 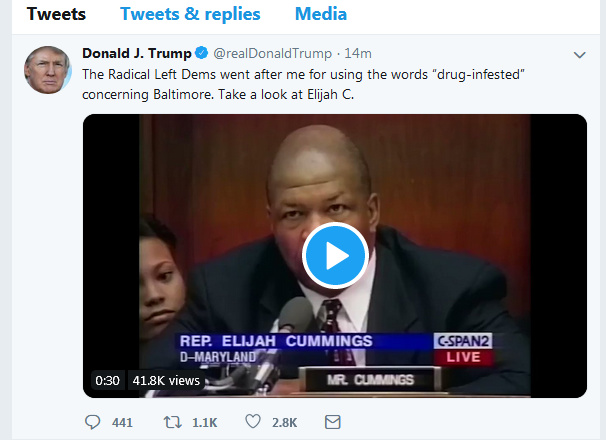 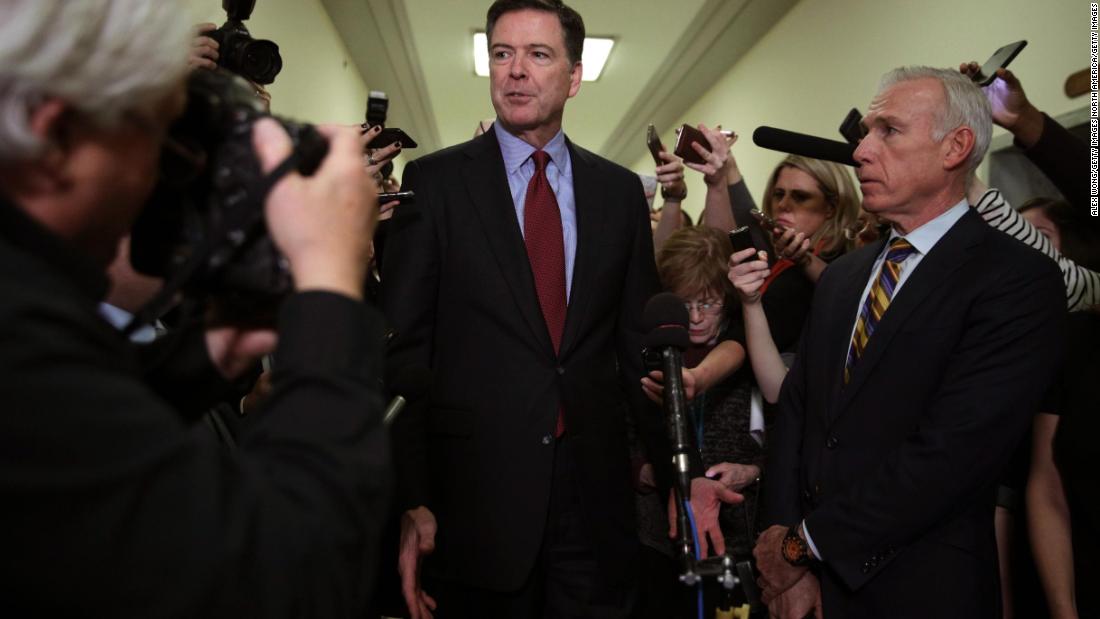 Justice Department prosecutors declined to prosecute Comey, in part because they didn’t believe there was evidence to show Comey knew and intended to violate laws on handling classified information.

At issue were memos that Comey shared with a friend and attorney, Daniel Richman, who then shared the information with a New York Times reporter.