Do republicans speaking out against Trump know something we don't?

The recent rash of republican outcry against Trumpism strikes me as both sudden and concentrated–there have been a lot of statements in a short period of time. I’ve also noticed a common theme I think is noteworthy: the abandonment of US global leadership.

I can imagine a quick response to this would be “but maybe that’s not such a bad thing.” I think that’s a conversation worth having and I don’t exactly disagree, but that narrative/debate is a distraction from my point in this post.

I’ll include quotes illustrating the common theme at the bottom of this post. Flake’s speech contains the specific statement I find most concerning; to what, specifically, is he referring?

I get the feeling that these republican politicians know something about current developments that we the public do not.

What current events explain this sudden upswell? Trump’s move to abandon the nuclear deal with Iran seems like a clear example. His comment about “the calm before the storm” is more of an example of things we don’t know, if he wasn’t just talking out of his ass. Have other things been reported that I’ve missed?

“To fear the world we have organized and led for three-quarters of a century, to abandon the ideals we have advanced around the globe, to refuse the obligations of international leadership”… “We will not thrive in a world where our leadership and ideals are absent. We wouldn’t deserve to.”

“For more than 70 years, the presidents of both parties believed that American security and prosperity were directly tied to the success of freedom in the world. And they knew that the success depended, in large part, on U.S. leadership”… “These matters would be difficult under any circumstances. They are further complicated by a trend in western countries away from global engagement and democratic confidence”… “We have seen the return of isolationist sentiments – forgetting that American security is directly threatened by the chaos and despair of distant places”… “Our security and prosperity are only found in wise, sustained, global engagement”.

“Unfortunately I think world leaders are very aware that much of what he says is untrue”… “I think that the things that are happening right now that are harmful to our nation, whether it’s the breaking down of… we’re gonna be doing some hearings on some of the things that he purposely is breaking down the relationships we have around the world that have been useful to our nation.”

Now, the efficacy of American leadership around the globe has come into question"… “Now, it seems that we, the architects of this visionary rules-based world order that has brought so much freedom and prosperity, are the ones most eager to abandon it”… “And our allies are now looking elsewhere for leadership. Why are they doing this?”

@adfaklsdjf you raise a very interesting point. Can you find more of these themes in Democrat speeches as well? I think it would be interesting to compare and constrast.

I mean almost certainly they know things we don’t, by nature of their jobs. Are they talking about something specific? That’s also possible. On the other hand, I feel like after a while horrified embarrassment can cross party lines.

It’s very disturbing to hear very little from the Dems…no-one wants to take control of the ship…almost as if THEY know something we don’t know…we don’t really need another ‘joe-the plumber’.

Personally, I think Trump’s comment about “the calm before the storm” is just him talking out of his ass. He does that sort of vague teaser a lot for attention, suspense, and his “reality TV” presidency to build up to a dramatic final reveal of his policy decisions.

If we want to take him literally, then his words were in the context of Iran and North Korea.

I think he’s partially being a troll in response to the chaos he’s creating and probably enjoys sending journalists/media on a gossipy/diversionary news cycle to toy with them. Ambiguity also lets him dismiss or give himself a pass on answering questions.

Plus, he feels his strategy of never giving people an idea of what he could do or will do next is “smart” (he has acknowledged something to this effect before). He believes unpredictability makes negotiations tougher for his opponents, but it really gives him cover for not being able to manage or execute a consistent, coherent plan.

He’s really not playing a complex game of 3-D chess being 5 moves ahead of everyone else; he does whatever random shit he wants to and then has other people scramble to make him appear favorable (much like how editors covered his nonsensical tangents on The Apprentice or how he said he contacted every military family of fallen soldiers, then had his staff expedite mailing his condolence letters to “back-fill the truth”).

Interestingly, use of vague language seen as an advantage in diplomacy was apparently the communication style of Henry Kissinger and Nixon, both of whom Trump admires. 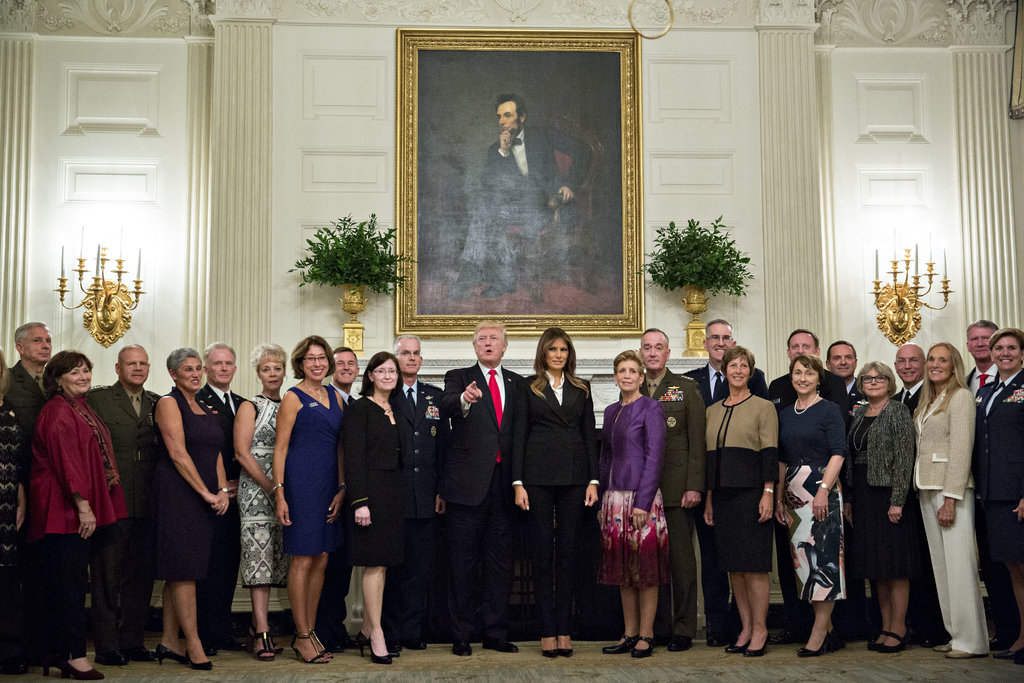 What Did President Trump Mean by ‘Calm Before the Storm’?

With a wink and a smile, the president made ominous comments before a dinner with military leaders, but repeatedly refused to explain what he meant.

There’s no way to know if those Republican Congressmen were referring to something secretive, but I’m not surprised globalism was a common theme in their speeches. Given our relative long-standing history with the U.S. president as the “leader of the free world”, neglecting global responsibilities impacts everything: the economy/trade, security/terrorism, health, human rights, democracies, etc. Those are the highest stakes we could gamble with, so it makes sense they’d all address those points.

I thought this paragraph from an older Foreign Policy article was spot on:

Trump is a boss, not a leader. He knows how to tell people what to do. But he has not shown he has the tendency or skills to persuade those over whom he does not have direct authority. In that category falls every other country. That is why the “America first” fantasy is so appealing — it’s an excuse not to deal with other countries that the White House cannot compel.

It is unclear what U.S. policy or strategy is, even on the most pressing issues.