"Now you know how we felt under Obama." 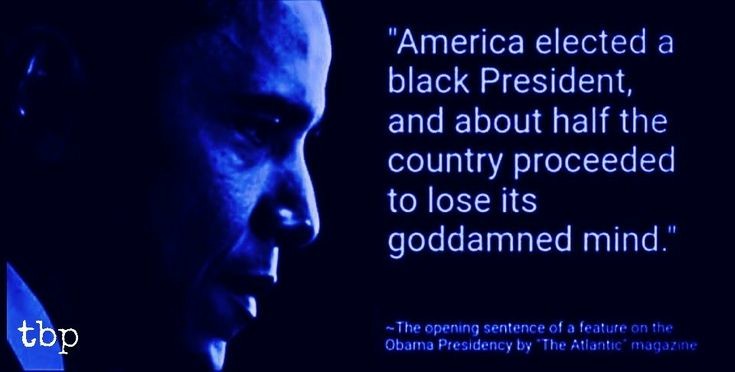 I see that on social media and it blows my mind.

I get disliking a President. Or even hating him and his policies. I detested Bush Junior (although he practically seems like a Boy Scout today).

Obama was not the perfect POTUS, and even though I literally cried with joy watching his inauguration, I commented on things he did that I opposed. Most humans are on a spectrum between good and evil.

It seems to me that the extreme fears about Obama were based on conspiracy theories about his Muslimness or his Communist aspirations – not on anything real or tangible, no matter how much you disagreed with his agenda.

So when people say they felt Obama was an existential threat to Democracy itself, as we think Trump is, I can only attribute it to racism. Seriously. That’s all I got.

What do you think?

Whenever I see someone from the right say something similar to “this is how we felt under Obama” and I’ve asked for SPECIFIC instances on what may have caused their suffering…it’s always…(crickets). I too, chalk it up to outrage on their part that a black dude was in the White House which was unacceptable to them.

Me, now, on the other hand, I AM SUFFERING under a Trump presidency and I can say exactly why and it has ZERO to do with who Trump is as a white male. I am scared and embarrassed for my country. Many of my tax deductions have now disappeared and any tax savings will be paltry and soon gone after a few years. We are on the cusp of retirement and now we get to worry about whether SS and Medicare will be what it is now or if we can no longer count on any of it as part of our retirement. We did our best to save and plan, but you can only do so much of that as a working stiff! My health insurance rates have skyrocketed. I have out of control anxiety in which I wake up in the middle of the night with a racing heart. I’ve cried more in 2017 than I have in more than 55 years of life. I’m scared of being shot at a movie theater, a church, a mall or a concert. I’m ashamed to be an American. I AM SUFFERING.

That said, those clowns who couldn’t bear a black man in the White House have no idea what suffering is.

Obama was no saint and some pretty heinous stuff happened under his watch. But that said his presidency did a whole lot of good for a whole lot of people.

Bush the Lesser was a terrible president but he still did some good and he at seemed to believe in governing. Trump is quite simply a nihilist that doesn’t give a shit about anything other than himself and his wealth. One year in and the damage he has done to the country is incalculable.

So, all the problems I had with Obama? They’re magnified under Trump.
Getting involved in more wars in the Middle East? Trump is ramping up deployments to Afghanistan, instigating conflagration with the Israeli Embassy move, making relations with Iran very tense, and not handling Syria with any sense of acumen at all.
Torturing POW’s? He thinks it’s a great idea.
Drone strikes? Trump wants to make them less regulated
And don’t get me started on deregulation…

The one thing I look to as the silver lining to all this, is that Trump has put an ugly face on policies Obama quietly advanced. All I can hope is that the resistance becomes the leading charge that brings us to a progressive future.

There’s just no comparison between President Obama & trump, & those who say such things (“Now you know how we felt under Obama”) are probably beyond redemption, I’m sorry to say. It requires a peculiar form of blindness to think that the crass & criminal ignoramus that is illegally occupying the White House for the time being can ever compare to the intelligent & class act that was the Obama presidency. When he was elected, it gave me so much hope for our country, that racial stupidity was behind us now…I should have known better. That narrow minded individuals (of my own race) still existed in such numbers and that they still blame their own failings on everyone besides themselves came as a huge disappointment. I’d love to live long enough to see them all fade away like last weeks garbage, but that’s not realistic, just a wish.
Most of us ARE embarrassed to be an American now…you’re not alone. Somehow, we have to get through this nightmare conspiracy of greed & power and once again become the nation I know we can be. To do that, we MUST get big money- “dark money”- OUT of our political process, and we MUST get hostile forces (Russia, & maybe China, any & all) out of our government, and fix all the weak spots that have been exposed. And above all, we need to learn to talk to each other & trust each other, and work together. I’m thankful for this forum and the “WTF”-news we can trust. We must not allow our public education to be undermined (as the GOP is trying to do)- because it’s those with the least education that are most easily fooled.

There’s no such thing as a perfect president…all presidents are pulled in multiple directions by competing interests & responsibilities…there’s simply no pleasing everyone, all the time. Plus, they are privy to intelligence that can completely rearrange one’s obvious priorities while offering no way to publicly explain. It’s a really terrible “job” that few of us would enjoy & under the circumstances, I think Obama did a good job…especially in the face of relentless racism. I totally agree with you that trump cares about nothing, other than his own money & image, but I suppose we should at least be grateful that his ‘bulb’ seems pretty dim, as it could actually be worse* if he were “like really smart” (*hard as that is to imagine).
I am constantly reminded of what I was told was an old Chinese curse, “May you live in interesting times”. We are surely doing just that…I hope we come through them much much wiser.