👑 Portrait of a President

It’s easy to dismiss QAnoners as a bunch of kooky conspiracy theorists, but the sad, scary fact is, they’re becoming more and more mainstream within his base.

Keep in mind that Donnie himself is being impeached because he pushed crazy conspiracy theories of exactly the sort QAnon pushes. There is really no daylight between them and them. 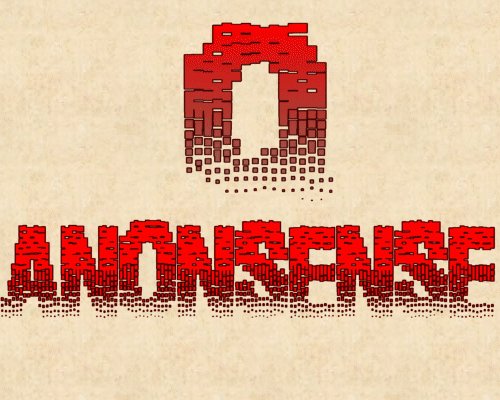 Time for a thread taking a look at QAnon, or #QAnonsense, as I prefer to call it. A rambling, bizarre ball of conspiracy theories, its adherents have proven dogmatic and even destructive. https://t.co/Xb0uPdaJ9F
Keaton_James 2019-12-29 22:59:51 UTC #302

It’s easy to dismiss QAnoners as a bunch of kooky conspiracy theorists, but the sad, scary fact is, they’re becoming more and more mainstream within his base.

And scary to consider there is an actual “flat earth movement” with a significant following (CNN).

“In an age where smoke is everything, Donald Trump can blow it with the best of them.”

And the fact that he used to pose as his own publicist in phone interviews is just shameful. Even if we’ve heard this all before, it’s fitting to stop and recall every now and then that Trump could really be considered the “Father of Fake News.” If you’ve never listened to the surviving fake interview tape, here it is. Click on the video at the top of the article which is actually the audio of the call accompanied by photos. 100% Trump – bragging a mile-a-minute, but wait, Trump’s not really bragging because that’s not Trump at all; it’s actually a guy named John Miller who is praising Trump! NOT.

Personally, I’ve always despised people who brag and avoid them like the plague – so it’s especially disturbing to me that 63 million Americans voted for this boorish braggart. Transcript: The full text of ‘John Miller’ interview about Donald Trump with...

Yes…no more idiot-proofing necessary. He’s the real crazy deal. Dumbed down supporters think it is sport or perhaps contrarian enough to piss of the ‘elite’ to be with T.

Yes…no more idiot-proofing necessary. He’s the real crazy deal. Dumbed down supporters think it is sport or perhaps contrarian enough to piss of the ‘elite’ to be with T.

Dead on. This is the heart of it. While there are those who really believe he doesn’t lie or only tells the truth, a significant portion KNOWS he lies and love it, because he’s lying to the people they hate, and about them. Popular culture the world over celebrates tricksters, grifters, and con men to a certain extent, and Americans especially love their vigilantes. The GOP has for a long time sold itself as anti-government, standing up to the man, when in fact they ARE the man. They capitalize on this image, and Trump especially, turning that lying into a bizarre merit because they can’t separate deceit in the name of justice or protecting people from deceit in the name of garnering power or protecting oneself. So long as he’s lying to their enemies, that’s fine. But surely he won’t lie to them, right?

A portrait in courage…

President Trump in a tweet on Sunday bemoaned the “stigma” of impeachment as Speaker Nancy Pelosi (D-Calif.) prepares to send House-passed articles of impeachment against him to the Senate as early as this week.

President Trump in a tweet on Sunday bemoaned the “stigma” of impeachment as Speaker Nancy Pelosi prepares to send House-passed articles of impeachment against him to the Senate as early as this week. 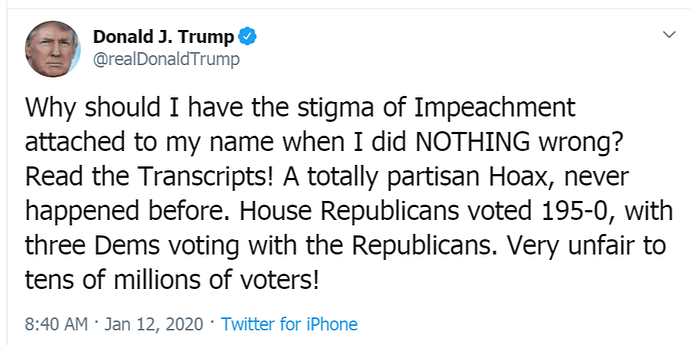 Portrait of a REAL president.

Our fellow Americans in Puerto Rico can use our support after this week’s earthquakes. They’ve shown their enduring spirit over the past couple years, and it’s up to us to pull together for one another once again. I hope you’ll support their recovery: https://t.co/rYhSb8uVXK 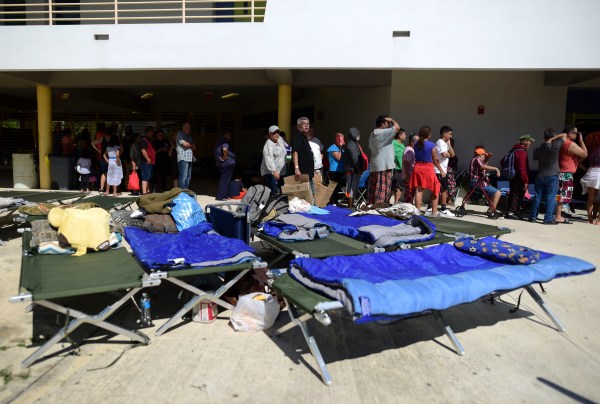 How to Help Puerto Rico After Deadly Earthquake

A magnitude 6.4 quake struck Puerto Rico early Tuesday killing at least one person, injuring nine others and knocking out power across the U.S. territory. Here are some organizations involved in relief efforts in Puerto Rico and information on how... “A Very Stable Genius,” by two Washington Post reporters, shows “how decision-making in his administration has been driven by one man’s self-centered and unthinking logic — but a logic nonetheless.”

“A Very Stable Genius” — a 417-page book named after Trump’s own declaration of his superior knowledge — is full of similarly vivid details from Trump’s tumultuous first three years as president, from his chaotic transition before taking office to special counsel Robert S. Mueller III’s Russia investigation and final report.

In spring 2017, Trump also clashed with Tillerson when he told him he wanted his help getting rid of the Foreign Corrupt Practices Act, a 1977 law that prevents U.S. firms and individuals from bribing foreign officials for business deals.

“It’s just so unfair that American companies aren’t allowed to pay bribes to get business overseas,” Trump says, according to the book. “We’re going to change that.”

The president, they go on to explain, was frustrated with the law “ostensibly because it restricted his industry buddies or his own company’s executives from paying off foreign governments in faraway lands.”

Anthony Scaramucci, who served as Trump’s communications director for just 11 days, recounts the president’s response when he asks him, “Are you an act?”

“I’m a total act and I don’t understand why people don’t get it,” Trump replies, according to Scaramucci.

Some details are more harmless than disconcerting. Early in his presidency, Trump agrees to participate in an HBO documentary that features judges and lawmakers — as well as all the living presidents — reading aloud from the Constitution. But Trump struggles and stumbles over the text, blaming others in the room for his mistakes and griping, “It’s like a foreign language.”

Trump was “verbally and emotionally abusive” toward then-Homeland Security Secretary Kirstjen Nielsen, the book reports, and routinely complained she was not doing enough about illegal immigration and the border.

According to the book, “He made fun of her stature and believed that at about five feet four inches she was not physically intimidating. ‘She’s so short,’ Trump would tell others about Nielsen. She and Kelly would try to make light of it. Kelly would rib her and say, ‘But you’ve got those little fists of fury!’”

The duo opens one chapter with the case of Rob Porter — the former White House staff secretary who was ultimately pushed out of his job amid allegations of domestic abuse from his two ex-wives. After a photo surfaces on the Internet of Colbie Holderness, one of his ex-wives, sporting a black eye that she alleges Porter gave her, Trump offers a competing theory.

“Maybe, Trump said, Holderness purposefully ran into a refrigerator to give herself bruises and try to get money out of Porter?” they write.

Some of the modest details in the book end up having larger consequences. After Trump bungles his India-China geography and seems to dismiss the threat China poses to India, for instance, the authors write that “Modi’s eyes bulged out in surprise.”

“Modi’s expression gradually shifted, from shock and concern to resignation,” they continue, adding that one Trump aide concludes Modi probably “left that meeting and said, ‘This is not a serious man. I cannot count on this man as a partner.’ ”

After the meeting, the aide explains to them, “ ‘the Indians took a step back’ in their diplomatic relations with the United States.”

Omg, he’s such a fraking nightmare.