Speak up, stand up, show up

“Hope is not an emotion: It’s a cognitive process—a thought process made up of what researcher C. R. Snyder called the trilogy of “goals, pathways, and agency.” Hope happens when we can set goals, have the tenacity and perseverance to pursue those goals, and believe in our own abilities to act.”

These past two weeks have been yet another stark reminder of why we must choose leaders who defend our Constitution, protect our country, keep our word, and support our allies. We deserve leadership that upholds our values, our strengths and freedoms. 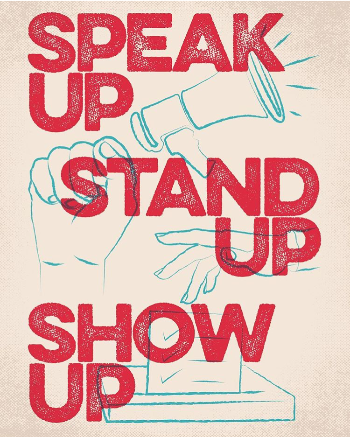 1. We got some good news from the courts:

An appeals court in Washington, DC ruled that Trump’s accounting firm must give Congress eight years of tax returns.

A federal judge in Texas ruled that it was unlawful for Trump to declare a national emergency to steal funds to build his border wall.

Federal judges in three states blocked a Trump policy that would have made it more difficult for immigrants who need public services to gain legal status.

A federal judge blocked Georgia’s six-week abortion ban that was set to go into effect in January.

2. Thanks to the Families Belong Together Committee and the Backers of Hate campaign, all the major banks have announced they will not renew their contracts with private prison companies GEO group and CoreCivic.

3. Around the country, thousands of people marched to remind Congress that no one is above the law and Trump must be impeached now.

4. For the first time since its founding 200 years ago, voters in Montgomery Alabama have elected a black mayor, Steven Reed.

5. On the first anniversary of Brett Kavanaugh’s confirmation, hundreds of Mainers held die-ins and protests to remind Susan Collins they haven’t forgotten about her pivotal vote. As one of her constituents, and a potential Democratic challenger, Bre Kidman said:

“Last year, I was nervous to beg my senator to do the right thing…this year, I’m coming for her job and nerves be damned.”

6. During Purdue Pharma’s bankruptcy hearing, P.A.I.N. and Truth Pharm held a die-in to call attention to the need to hold the Sackler family financially accountable for their role in the opioid epidemic and reject their unsatisfactory settlement offer.

7. During a town hall in Iowa, a constituent continued to press Senator Joni Ernst on her support for Trump’s illegal behavior.

8. Thanks to the investigative reporting by MLK50 and ProPublica, the largest non-profit hospital system in Memphis, TN is erasing the debt of over 6,500 patients.

9. A former Dallas police officer was found guilty and sentenced to 10 years in jail for killing Botham Jean while he was in his apartment eating ice cream and watching TV.

10. Two days after Atatiana Jefferson was killed in her home while playing video games with her nephew, the Forth Worth police officer who shot her was charged with murder.

11. Following public pressure, the Royal Shakespeare Company announced it is ending its relationship with this fossil fuel company.

12. California passed a law that will guarantee meals for all students. And thanks to a new bill, abortion access will now be mandatory on public college campuses throughout the state.

13. New York became the first state to pass a law that will require companies to list all ingredients on menstrual product packaging.

14. Thanks to decades of recovery programs, the Potomac River and its wildlife have received their healthiest grade in over 10 years.

15. Following months of organized rallies and speaking out at city hall, workers at Houston, TX airports will see a 65% wage increase by 2021—getting them one step closer in their #FightFor15.

16. More than 12 states and many cities around the country celebrated Indigenous Peoples Day for the first time this year.

I’ve been reading about this year’s Nobel Prize winners and their important work, these women who have taken on three dictators, as well as the positive effects of the guaranteed income pilot program happening in Stockton, CA and why it’s different from the “Freedom Dividend.”