The 5 types of Trump voters

I’m not a big fan of the Cato Institute (to put it mildly) but this report looks useful. I hope Democrats read it and realize that the way to win back the “anti-elites” sub-group is with economic populism. Who Were Donald Trump's Voters? Now We Know

These 3 longer articles are from earlier this year and depict the philosophy & psychology behind the “Trump phenomenon” driven mostly by fear, disdain, resentment, hate, relative or perceived decline in economic/social power, etc.

Trump’s lies, and his urge to tell them, are pure Big Brother, however oafish their articulation.

On Trump’s inauguration: populism and demagoguery. 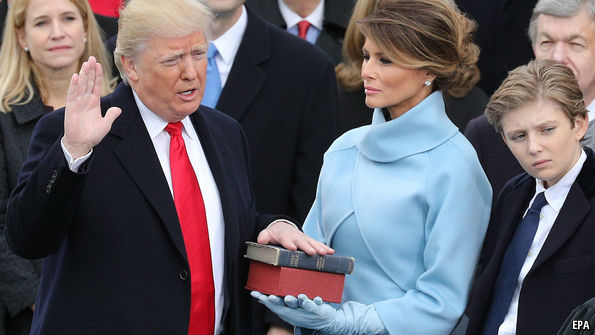 4chan: The Skeleton Key to the Rise of Trump

Trump’s younger supporters know he’s an incompetent joke; in fact, that’s why they support him.

Broadly, it touches on 3 groups:

Cornelia, that sounds very hard to deal with. Do you by chance live in SF Bay Area? We’re doing a series of workshops on how to use Powerful Non-Defensive Communication to talk to Trump sympathizers. See ericaetelson.com/resist. Also, if you can’t make the workshop. here’s an article I wrote about it before the election: http://www.alternet.org/election-2016/how-flip-trump-voter-without-pushing-too-hard. We’re hoping to roll these workshops out across the country so stay tuned. Good luck!

Another important piece of the puzzle (not addressed by this report) is the way in which the Democratic Party has turned its back on working class voters. I couldn’t recommend more highly the book “Listen, Liberal” – it’s an insightful, entertaining and fast read that left me groaning and gnashing my teeth at the ways in which centrist Democrats have, ever since Bill Clinton and arguably Jimmy Carter, opened the door to white nationalist faux-populism.

I could use some input into how one actually deals with the cultish behavior of a dt follower; that happens to be my son, who broke his neck at age 15 (in front of me no less) in 2001. I raised this child to understand history, to study it along with respecting honor and integrity.
Due to excellent care he actually lives independently, with a burst C4 level injury.
So I just can not for the life of me

understand his downright worship of this madman.
Managing our relationship a true test of a mother’s love

but I fear some of his latest actions reflect having to face the unpleasant reality of just how conned he was.
Anyone else here dealing/ dealt with a similar situation

Interesting commentary and summary of studies published in the Journal of Social and Political Psychology by a UC Santa Cruz professor in March 2017 describes 5 major social psychological phenomena that many (not all) core Trump supporters tend to exhibit:

A psychological analysis of Trump supporters has uncovered 5 key traits about...

The lightning-fast ascent and political invincibility of Donald Trump has left many experts baffled and wondering, “How did we get here?” Any accurate and sufficient answer to that question must not only focus on Trump himself, but also on his...