These individuals tend to post a lot about the Trump Administration with a large focus on the following topics below. I tried to limit each category to ~5 favorite people.

Footnotes at the bottom of this post will track updates and new additions: ¹,²

I have a Twitter list (that’s public) that I call “news smarts” – over time, I’ve carefully complied people I’ve found to be the best for breaking news or good analysis. 9 out of 10 times any breaking news, etc I come across in this list before it even makes it to the “trending” section (which I always use to rely on to get updates – but now, that’s my second stop!).

Anyone can subcribe here to the list here: https://twitter.com/mouseam/lists/news-smarts1

Also, a good follow for Trump/Russia breaking news is Benjamin Wittes - in particular look for the “BOOM!” Baby Cannon tweets, those are articles with significance to Trump/Russia.

Well, this morning it was confirmed that Reinhold Niebuhr (@FormerBu) is, in fact, James Comey.

Found this last night via @alt_uscis 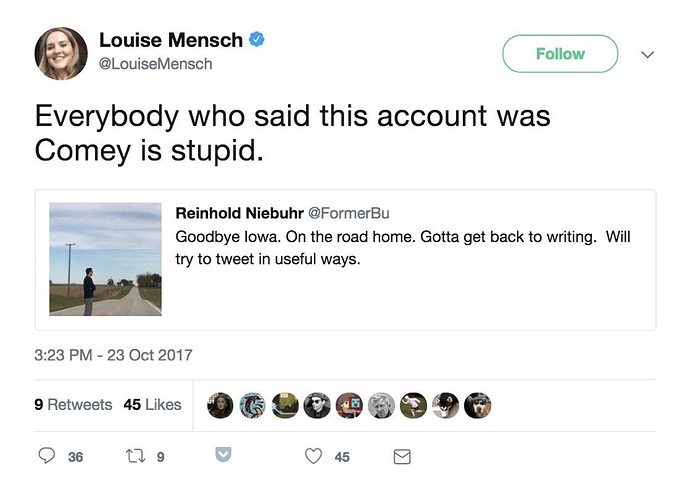 I refuse to give her an actual link (this link above is to Alt-Immigration’s tweet, which was also just a screenshot) for traffic or retweets, but every so often she gives me a good, if usually bitter, laugh.

HA HA HA. She’s the fucking worst. I regret falling for her shtick when I was emotional and vulnerable after the election. What an assclown.

LOL. I found out yesterday I’m blocked by her

I’ve had her on mute for months, also I never respond to anything she’s mentioned in and don’t even use her full name…so I found it quite amusing.

Hell yeah–you on…THE LIST muahaha! I read she uses block apps, or whatever it is that can apparently block the ppl simply following ppl she’s blocked, but who the fuck knows.

And srsly she is good at what she does, fooled countless ppl before the double-agency crazy started showing thru. I was fucking confused for a while too ffs, and I still see some who I think should know better wrapped around her finger.

LOL. Welp, @FormerBu is now @Comey and verified (blue check mark and all)!

Here’s my new handle. Glad to be part of the Twitterverse. Grateful to Reinhold for the cover these last few years.

Seth is great! His threads just kill me…he once had +200 tweets in a single thread (yes that’s two zeros, not a typo). I feel like his average is like 50 per thread.

It’s like at some point just write an article on medium and post it with maybe a few tweets of the highlights.

I wish Seth would actually cite all his sources. It’s a lot of quasi-reporting and inference, which really unfortunate.